The death of an aquarium diver when he was stung by a leopard whiptail ray has been ruled a tragic misadventure at a coroner’s inquiry. 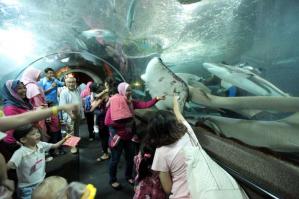 The death, which took place at the Underwater World Singapore aquarium last October, was reported on Divernet.

The aquarium had been closed since June, with long-serving senior supervisor and diver Philip Chan, 62, retained as part of a team of 10 to transfer its 2500 occupants to new facilities.

Chan had devised a low-stress procedure for transferring four leopard rays out of their tank for onward transport, according to a report on the inquiry in Today.

State Coroner Marvin Bay heard that the dive-team had struggled to persuade the last of the rays out of deep water onto a shallow holding platform. Once they got it there Chan had climbed onto the platform, but other divers heard him cry out before collapsing.

The diver was unresponsive as they removed him from the tank, and after seeing a barb protruding from his chest he was taken to Singapore General Hospital, where he was later declared dead.

An autopsy found that the 22cm barb had punctured his heart and aorta, and he had died as a result of excessive bleeding and heart failure.

The inquiry heard that although leopard whiptail rays normally avoided threats, if they felt cornered they could flick their tail up to deploy a barb.

The aquarium’s veterinarian consultant Dr Frederic Chua testified that the ray’s behaviour had been unusual, in that on detecting Chan it had reversed in the water.

He thought that the ray, which had been caught from another enclosure eight years before, was probably “devising ways to escape capture”.

The coroner drew the lesson that despite long-term captivity, wild animals that are cornered, surprised or feel threatened, could “revert to their hard-wired natural instinct to reflexively lash out and inflict fatal or severe injuries”.