Nosy means island when you’re in Madagascar, and Nosy Be is the one that tends to attract divers seeking a base for unspoiled Indian Ocean diving – DAN BURTON has 10 days to size it up 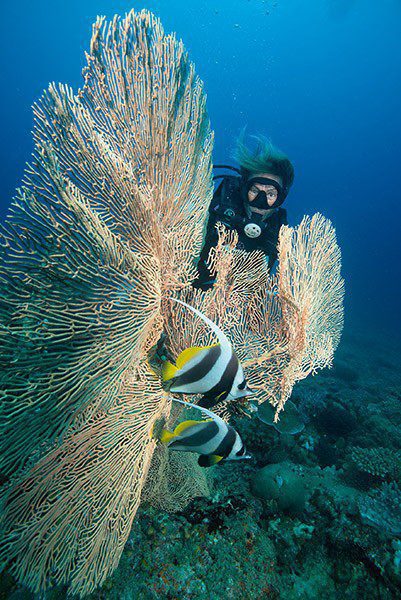 THE INDIAN OCEAN HAS MANY remote dive-sites, and although it is the world’s fourth-largest island those of Madagascar are among them. They are rarely dived.
Madagascar hosts an abundance of wildlife, 90% of it endemic to the island and including aquatic mammals, freshwater fish, reptiles, amphibians, gastropods, crustaceans and aquatic insects. This distinction has led some ecologists to refer to it as the “eighth continent” and certainly it is a biodiversity hotspot.
Madagascar also has the third largest coral-reef system in the world, featuring more than 400 coral species. The pristine but delicate reefs provide a breeding ground for many pelagic fish, including sharks, sailfish and tuna. Rich plankton in the warm, shallow inshore water in autumn attracts migrating whale sharks and Bryde’s and humpback whales.
There are plenty of sites to dive around the island, but many of those off the east coast are exposed to the elements, so conditions can be challenging. The safer option is to visit the dive-sites on the western side.
Diving has become more popular in Madagascar in the past few years, with Nosy Be (Big Island) becoming the prime tourist destination with its “back to basics” approach.
The island lies in a sheltered position five miles off northern Madagascar in the Mozambique Channel. There are several smaller islands nearby, including Nosy Komba, Nosy Mitsio, Nosy Sakatia, and Nosy Tanikely.
I had a 10-day trip planned, and my first stop was with Sakalav Diving in the northern part of the island. The centre is run by friendly French couple Nathalie & Alan Benoit, who offer clean and spacious bungalows and traditional local cuisine.
The accommodation is set in the hills behind the beach among dense rainforest and offers spectacular views of the bay.
Nosy Be is a well-known whale-watching destination, but I had organised my trip in the autumn to coincide with the whale-shark migration.
We met up at the dive-centre, loaded our kit into the boat and set off. Leaving the bay, we skimmed over calm, glassy waters and enjoyed the scenery.
The diver team scoured the horizon for any big-animal movements.
In the distance, a commotion erupted. From out of nowhere, squawking flocks of terns fought for food among thrashing tuna. And in the midst of this turmoil, the fin of a whale shark or marokintana greeted us.
Marokintana translates as “many stars”. Madagascan fishermen working by night gave the whale sharks this name based on the speckled body patterns they could see through clear water.
Every now and then the fin would surface before me, and the distinctive spots became visible among the general thrashing about.
Heart racing, I put on my mask and fins, slipped into the warm sea and headed into the fish frenzy. From out of the plankton soup, the gaping mouth headed straight towards me, missing me by a few inches. I finned as fast as I could to keep up, but was left behind in the whale shark’s wake.
The next boat-drop was perfect. The shark had found a good feeding spot, slowed down and swam right up to me.
I was set up with a frame fisheye lens, and the entire head was in frame. As
I peered through the camera, I didn’t realise how close it was. The giant was just inches in front of the dome-port and still seemed to be bearing down on me!
With a flick of my fins and a quick turn, I lay alongside the whale shark as it glided along the surface through the red plankton. I snapped away, trying to capture it from as many angles as I could.
The creature soon turned and dived rapidly down through the bloom, leaving a few flashing stars to say good-bye to me.

I MOVED DOWN THE COAST of Nosy Be to spend a few days based at Madirokely beach with Forever Divers, run by French instructor Sylvia.
Her facility is set back from the main beach among the local bungalows, and is a great place to hang out among the people who live there.
The beach is livelier in this area and offers more choice for those who enjoy nightlife and want a choice of styles of accommodation and food.
Madagascar has no fewer than 48 National Parks, but only one National Park marine reserve. This pristine site is located on Nosy Tanikely (Small Island), a half-hour boat-ride south of Nosy Be.
The area became protected in 1999 after overfishing was said to have left it almost fishless. It has now become a sanctuary for many species.
We crossed over to Nosy Tanikely next morning and toured the island to experience the luscious rainforest. We were greeted by screeching fruit-bats, lemurs, squawking birds and many mysterious rustling sounds.
After an hour of fighting our way through the undergrowth, we headed back to the boat for our first dive.
Our divemaster led the group down to the sandy seabed and along to some spectacular mushroom coral, known locally as Chinese hats. The circular discs lay side by side, as if carefully placed by hand.
I noticed two tentacles extending out from the reef. As we got closer, a curious crayfish marched out and straight towards Sylvia, holding its ground like a soldier going into battle.
We counter-attacked, moving in to take some pictures. The large cray started to retreat, and with a flick of its tail disappeared back beneath a silty ledge, leaving nothing but a plume of sand.
Sylvia had told us there were seahorses in a secret spot nearby. There was nothing to see on arrival, but then a tiny master of disguise appeared from among some soft coral.
As I moved closer it turned away, playing a hide-and-seek game that left us mesmerised. I managed to get a few pictures before the fragile creature disappeared back into its reef hideaway.

AFTER A TOUR OF THE REEF, we made our way up from 24m and came into a shallow sandy aquarium under the boat.
For the rest of the dive we all sat on the bottom in a few metres of water and watched the life on the reef carry out its daily chores.
When I visit new dive-locations, I always try to visit at least one site that is really off the beaten track. Sylvia had told me about Atnam (manta spelt backwards), and the boat whisked us away to this offshore reef to which dive-boats rarely take their clients because of the depth and currents.
We arrived shortly before slack water. I jumped in and made a rapid negative descent to the sloping reef at 38m.
As we dropped down the wall, I could see a rock pillar towering up from 30m below us, covered in pristine gorgonian seafans. Next to it was the wall, covered in line upon line of fans. Sylvia moved over and hovered over the fans at 45m.
I dropped a few metres below her to get an upward wide-angle shot from 50m.
Shooting at depth and lighting a fisheye shot is always a challenge. I spent a short time making fine adjustments to my flash and exposure to get a soft and pleasant lighting effect over the fans and my dive-model.
The current was slowly starting to pick up, so we went with the flow and drifted down a huge corridor between the wall and the pillar, taking care not to touch any of the fragile fans as they swayed gently in the current.
By now our computers were starting to indicate some decompression. We had only 12-litre tanks, so it was time to move up the slope.
After a short swim we were back atop the reef at 22m, and spent the rest of
the dive exploring the coral heads while blowing off the last few nitrogen bubbles.

THE FINAL PART OF MY VISIT was spent on tiny Sakatia Island, just over a mile from Nosy Be. I stayed at Sakatia Lodge, a luxury hotel set on a quiet, remote beach, making it a perfect getaway from the hustle and bustle of the main island.
For divers who want something a little different, the facility offers fluorescent night-diving. If you’re a photographer it’s worth reading up about this before you go, so that you can bring the correct equipment to achieve your image goals.
Jacques the local divemaster is also a master at fluo-snapping and will introduce newbies into this wonderful way of seeing life light up naturally on the reef at night.
Sakatia Lodge also offers dive-safaris on its luxury custom 15m catamaran. These special charters take experienced divers to most of the remote and rarely dived northern sites. I didn’t have time to head further north, but plan to do so on my next visit.
I thoroughly enjoyed the Nosy Be experience, my only disappointment being the poor visibility. The best was on Atnam reef, where it cleared up to 20m.
The visibility varied from day to day, and was very unpredictable. This, I understand, is mainly to do with slash-and-burn deforestation and the silt run-off from mainland rivers.
This doesn’t really affect the macro-diving, of course, and while I’m not a great macro fan this part of the Indian Ocean does seem to offer exceptional sightings. If I came again, I would come better equipped for photographing the huge selection of nudibranchs, frogfish, seahorses, ornate ghost pipefish and other critters present.
Wildlife lovers generally won’t be disappointed. There was so much to see each day, with an amazing diversity of species literally on your doorstep.
And I do mean literally – I had the pleasure of welcoming resident chameleons and a boa constrictor on my bungalow terrace most mornings!