No, NIGEL MARSH & HELEN ROSE weren’t on a chocolate binge, it’s just that every major highlight of their four-atoll liveaboard tour seemed to start with the letter M! 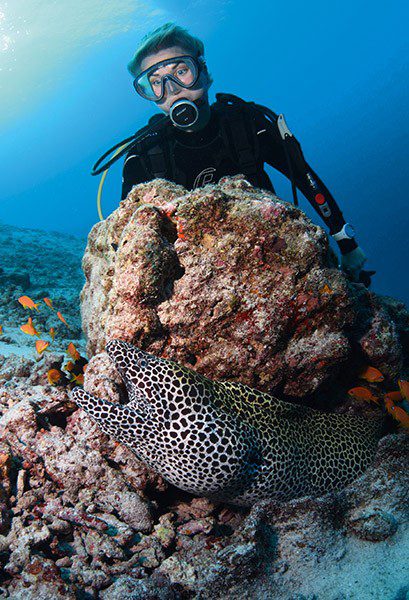 WHEN YOU BOOK ON A DIVE-TRIP to the Maldives labelled the “Sharktastic Tour”, you expect to see plenty of sharks and for them to be the highlight of the trip, especially as all shark species have been protected around this island nation since 2010.
Well, we did see plenty of shark action, but as it turned out, the sharks were not the highlight of this trip. Instead it was the M&Ms – diver attractions beginning with the letter M.
Spread across 35,000sq miles, the 26 atolls that make up the Maldives are dotted with countless reefs, cays and resorts. The best way for a diver to explore them is to join a liveaboard, and with more than 150 plying the local waters, the choice is immense.
Emperor Divers’ Sharktastic Tour sounded perfect for us, because it involved visiting four atolls and diving some of the best shark sites. It is offered only from January to April, the best season to dive the Maldives, so we booked onto a trip this February.
Our boat was Emperor Virgo, one of six the company operates in the Maldives and one of the smaller vessels in its fleet at 32m long. We were impressed from the moment we boarded and were handed a cool fruit drink.
The vessel accommodates 18 guests in large en suite cabins over three levels. It has a large sun-deck and a spacious dining and lounge room and bar.
Like other Maldives liveaboards, it has no dive-deck. All the dive-gear, cylinders and compressors are kept on the accompanying dhoni. This seemed a bit strange to us at first, but we quickly saw the advantages – no wet, smelly dive-gear, and larger cabins on the main boat.
For our check-out dive the dhoni took us to a site just north of the capital, Male. We didn’t have high expectations of Kanduohgiri, because the briefing made no mention of sharks, but this was where our M&Ms week started – with an extraordinary encounter with moray eels.
Seconds after descending we ran into the first of them, a giant moray hanging out of a hole in the reef wall.
We were just about to photograph it when we spotted a more spectacular sight nearby – a honeycomb and a giant moray sharing a hole. Beyond this pair was another honeycomb moray, and another, and another. We had stumbled across a garden of eels.

DURING THE BRIEFING the chief dive-guide Issey had mentioned that this site was near a tuna-processing plant and was home to a few morays, but over the course of this dive we saw well over a hundred.
The large honeycomb morays were easily the most spectacular with their bold black-and-white colouration, but we also saw grey, white-eyed, clouded, yellow-margined, giant and dark-spotted morays. This has to be the greatest collection of moray eels at one dive-site – and this was our check-out dive!
Besides the morays we enjoyed an abundance of fish life in the 30m visibility – schools of barracuda, trevally, fusiliers, bannerfish, bigeyes and even a pack of roaming remoras. But this site was also home to garden eels, sting rays and a large Napoleon wrasse.
We quickly got into liveaboard mode – dive, eat, nap, dive, eat, nap and repeat. The rest of the first day was more about sharks. At South Male Atoll we did our first channel or kandu dive at Embudhoo Express. These kandu dives, a signature of the Maldives, generally require the use of a reef hook to anchor you to the bottom in the strong current.
Embudhoo Express was a typical example, and hooked into the reef we watched a parade of grey and whitetip reef sharks in the blue water. They were great to watch, but stayed frustratingly out of camera range.
We also encountered trevally, batfish, mackerel, tuna, jobfish, bonito and Napoleon wrasse. After 20 minutes of shark- and fish-watching we unhooked and drifted down the channel, exploring the many fish-filled ledges and caves in the channel wall.
We got much closer to the sharks on our night-dive at Alimatha Faru. This site, off the end of a resort pier, is renowned for its tawny nurse sharks and rays, and it didn’t disappoint.
The sloping reef at this site is a popular overnight spot for liveaboards, and we were sharing the site with four other boats. Even with 100 divers in the water, it was a blast.
We saw dozens of large and small tawny nurse sharks either swimming around the reef or inspecting the divers, hoping for a bit of food. They were often accompanied by groups of Jenkin’s whip rays, trevally and also the occasional reef shark.
Our guides didn’t feed the marine life, but it was entertaining to watch a guide from another group getting mobbed by the sharks, rays and fish each time he produced some morsel.
The following day we dived sites on Vaavu Atoll, exploring more channels from the open water into the atoll lagoon.
We saw plenty of shark action at Miyaru Kandu, but Golden Wall was spectacular with its lovely soft corals and masses of fish, including schools of pretty oriental sweetlips and five-lined snapper.
Each day the crew of Emperor Virgo spoilt us with their wonderful service and a feast of food. The meals were buffet-style, and chef Camilo cooked up an incredible range of Asian and Western dishes that left no one wanting.

ON DAY THREE WE HAD another case of the M&Ms – this time a rather unexpected encounter with a group of marine mammals at Meemu Atoll.
Each time we dived one of the reef channels we expected something special, hoping for a sailfish, a tiger shark or a hammerhead, and it was no different when we dived Vanhuravalhi Kandu.
We spent the first 10 minutes of the dive hooked in at the channel mouth, watching the reef sharks and pelagic fish. But after unhooking we explored a large coral head riddled with ledges and covered in colourful reef fish.
We were busy photographing the fish when we suddenly heard a series of clicks and whistles. Peering into the blue, the source of the noise could be faintly seen, a pod of dolphins. We then swam like crazy into the middle of the channel and were rewarded with an extraordinary sight – hundreds of spinners!
It was an incredible spectacle as pod after pod of these delightful creatures swam past a group of spellbound divers. The procession lasted only two minutes, but it is locked into our memory forever.
After this amazing marine-mammal encounter the rest of the day could have been an anti-climax, but we saw more than enough reef sharks at Mulah Kandu to keep us happy.
This site was also home to schools of trevally, barracuda and rainbow runners.
Our shark adventures were due to continue the next day at South Ari Atoll, with whale sharks on the itinerary. Unfortunately someone forgot to remind the whale sharks.
They are regularly seen on the sloping reef at Maamigili, we were told, but not that day. We still had two nice dives with a good collection of reef fish and turtles, but the visibility on this western atoll was only 12m, unlike the 30m plus we had enjoyed on the eastern atolls over the previous three days. The north-east monsoon was pushing dirty water from east to west.

THE FOLLOWING DAY it was M&Ms time again, the magic word being mantas. The Maldives has the world’s largest population of manta rays, and while Hanifaru Bay is the most famous manta dive in the country, these gentle giants can be seen at many other sites.
We had enjoyed our first brief manta encounter the day before at Rangali, but the best action was at a site called Moofushi. This reef has numerous cleaning stations, and over two dives we experienced some spectacular manta moments.
On the first dive the main cleaning station was devoid of mantas, and it wasn’t until we moved to a smaller group of coral heads that we encountered one. This ray was extremely curious, and we found ourselves eyeball to eyeball with it many times.
But the real magic started when a second, third, fourth and finally a fifth manta joined the party, zooming around us and around the cleaning station.
It was a wonderful experience, but very frustrating to photograph in only 10m visibility.
On the second dive there were even more manta rays to be seen. At the main cleaning station four large rays were hovering, and we found another three on the smaller cleaning station.
Our final M&M came all two quickly with a visit to a wonderful dive-site on North Ari Atoll known as Maaya Thila, home to an impressive group of marble rays. We dived this brilliant pinnacle of coral over two dives and found it overflowing with marine life.
The first dive was at night, and while the small critters such as octopus, cuttlefish, crabs, shrimps, nudibranchs and flatworms were all fun to observe, it was the bigger creatures that really entertained.
During our hour-long dive we encountered sleeping hawksbill turtles, soaring spotted eagle rays and an unexpected stonefish. Also out hunting for prey were reef sharks, moray eels and packs of trevally.
But the highlight was the group of hungry marble rays. Every few minutes one of them would come into view, grubbing in the sand for prey. At one stage we had three swimming around us, which made it a very special night dive.

WE DID A SECOND DIVE at Maaya Thila the next morning. Unfortunately the marble rays had disappeared, but the shark action made up for that. We had seen a lot of sharks on this Sharktastic Tour, but had found the reef sharks frustratingly camera-shy – however, this was not the case on our final dive at Maaya Thila.
Cruising around this pinnacle were dozens of grey and whitetip reef sharks, including numerous juveniles. On previous dives we had been lucky if the sharks came within 6m of us, but at this site they came within 2m.
The only problem was that I was using a macro lens because of the reduced visibility. Fortunately there were plenty of great macro subjects, including a range of friendly reef fish.
That recent wonderful week in the Maldives ended all too quickly, and exposed us to some amazing dive-sites and incredible marine life. But our memories of this trip will always be of the M&Ms – the manic morays, the marine mammals, the magnificent mantas and the magic marble rays.