A Drama on Drifter Eddy

A Drama on Drifter Eddy 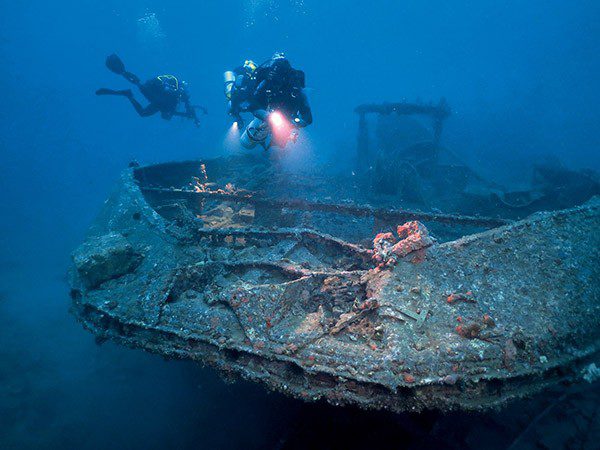 IT’S MORE OF A DOCU-FICTION than a boring rendition of the facts,” said Emi, the producer/cameraman who had just phoned. He had asked me to join him on a dive where we would be filming the wreck of the Eddy.
The Eddy was a drifter built for the Royal Navy during World War One, but used as a minesweeper during WW2.
Now Emi and I are good friends, but we tend to approach underwater films differently. My scientific and educational occupation compels me to work on documentaries, while Emi tends to be more creative with the facts, in order to target a wider audience.
He is well aware of these differing viewpoints, so he often has to sugar the pill for me by offering to donate photos of the wreck to Malta’s War Museum.
We were meant to shoot some footage of the wreck but, more importantly for him, I was supposed to “find” a set of rosary beads there, and Emi would film my exploit as I pulled it from the sand.
Of course, I was worried about doing this. It is unethical and illegal to remove artefacts from war graves in Malta, and I wasn’t too keen on doing time at its Corradino Correctional Facility.
When I told Emi that I didn’t want to be a part of his scheme, he hastily explained that the rosary beads would be placed there to tie the wreck into a storyline of love and heroism set in Malta during WW2. The beads were supposed to be given by a loving mother to her son to afford him some heavenly protection.
My initial conclusion was that, if the son ended up in Davy Jones’ locker, this was not exactly a great advertisement for the power of the afterlife, but I didn’t really know the whole story so I held my peace. It was fiction rather than documentary, some sort of wartime period drama. I decided that I wasn’t averse to a new career in film, after so many years as a boring academic!
Diving on the Eddy is an extremely attractive proposition anyway, and Emi didn’t have to promise museum donations or my name in lights to get me hooked. The wreck is rarely dived because of its location – it lies on a sandy bottom at a depth of 56m, about a mile outside the entrance to Valletta’s Grand Harbour.

THE GRAND HARBOUR is a busy port, and the last thing divers need while decompressing is some enormous ship passing close by.
For this reason, we would normally dive this wreck only on two occasions during the year – 31 March and 8 September. That’s when regattas are held in the harbour, with brightly coloured traditional Maltese boats (called dghajjes, pronounced “dahyaes”) from nearby localities competing in rowing races, so the harbour is closed to shipping.
But on this occasion, special arrangements were made with the harbourmaster to ensure that no cruise ships were due to enter or leave the port while we were diving the Eddy.
In fact one of these behemoths was just leaving port as we made our way to the dive-site. We had to cross its wake in the RIB and that impressive wake was difficult to describe, but imagine a boiling cauldron of frothing turquoise water some 50m wide trailing from the ship for some 200m. Not the sort of environment I would like to be in, or anywhere near, while decompressing.
Like all divers I enjoy the majesty of large wrecks, but smaller wrecks have their own peculiarities and charm.
I normally complete a couple of tours of a smaller wreck in a single dive, which allows me to focus on particular aspects that show most promise. This definitely applies in the case of the drifter Eddy.
The British Admiralty commissioned more than 300 modified trawlers and drifters during WW1. The design of these fishing-boats and their seaworthiness proved ideal for specialised naval work.
Trawlers drag heavy nets along the seabed to catch cod, plaice, haddock and other demersal fish, while drifters fish for herring and other pelagic fish using drift nets. So trawlers were eminently suitable to trawl mine-sweeping gear, while drifters were more suitable for deploying blockading barrages and heavy anti-submarine nets.
HM Drifter Eddy was built as a modified herring drifter by Alexander Hall & Co Shipyards at Aberdeen on 27 August, 1918.  She was a small steamship with a gross tonnage of 96, and was 26m long with a beam of 5.6m. Like all her sister steam drifters, she was powered by a triple-expansion engine and a single steam boiler, propelling her at the rather slow speed of 9 knots.
Some drifters were armed with an anti-submarine six-pounder gun, but there is no trace of such a gun, or its emplacement, on the Eddy.
Eddy was transferred to Malta some time before the outbreak of WW2, probably for deployment on the anti-submarine nets in the Grand Harbour.
However, the need to combat the intense mine-laying activities of the Axis navies meant that, like other drifters based in Malta, she had to be rigged as a mine-sweeper, even though she had a steel hull. The decision proved fatal.

SOME TIME DURING the afternoon of 26 May, 1942, Eddy was tasked with sweeping the main approach lanes to Grand Harbour alongside HMS Beryl and the tug St Angelo. Accompanying them were the other mine-sweepers Trusty Star and Swona.
Weather conditions deteriorated further and the sweep had to be abandoned after only one mine had been swept. It was at this point, at 4.30pm, that Eddy struck a mine as she was making her way back to Grand Harbour.
The explosion ripped through her steel hull on the starboard side and she sank quickly, with the loss of eight of her crew. Her commanding officer and 10 ratings were saved from increasingly rough seas.
The wreck stands upright on a silty bottom, and is remarkably intact for its age. It seems that the site had been used previously as a dumping site for material dredged from the harbour, so there is a lot of silt, broken building stones, bricks and gravel around.
Because of the silt it’s advisable to keep clear of the bottom, or you would not be popular with your dive-buddies – especially the photo/videographers.
Visibility is pretty good by British standards but most Maltese divers are not too impressed by the vis at this site, especially if there happen to be a couple of ploughshare horses in the group!
The Eddy’s high wooden superstructure has disintegrated but the frame of the steel structure below the bridge still stands. The steel hull remains largely intact, except for the gaping hole on the starboard side that marks the place where the ship hit the mine.
Winches, capstans, steel cable-drums and other mine-dredging hardware are still evident on the deck, while the paravane, otter and sweep wire assembly can be seen on the seabed just beside the wreck. It’s possible to penetrate the wreck but the silt inside is easily stirred, so this can be quite a hazardous operation.
The steering-gear assembly, navigation console and other bridge equipment can still be seen at deck level, but the ship’s helm has deteriorated completely, probably because it was made of wood.
Practically all surfaces have now been covered with a heavy growth of sponges, algae and other marine encrustations.
I like to think that the wreck now has a new lease of life, and we’ll see the occasional grouper, conger and moray eel appropriating a suitable length of pipe or crevice as a convenient home.
Much as on other deep wrecks, schools of the swallow-tailed red damselfish anthias crowd around us during the dive. Nudibranchs are also quite common, and make good subjects for photographers.
These wrecks often have tragic stories but they have become oases of life among the sandy, silty barren surfaces too deep for Posidonia seagrass to colonise.

TO DATE I STILL DON’T KNOW the full storyline of Emi’s docu-fiction and how it ties in with the Eddy’s real story, but I have to admire the way he strives for authenticity.
The rosary beads had been carefully chosen for their 1940s look, and aged in a saltwater tank for some months so that they wouldn’t look as if they’d just been taken out of the box.
I had to carry them in my BC pocket during the dive and find a convenient place where I could bury them.
Emi had kept telling me to film this sequence first, as bottom-time is rather limited at 56m. At the same time, I wanted to use my own camera to film all my actions. Such footage would quash any rash conclusions reached by the authorities that I was interfering with the wreck and would demonstrate, if required, that we had planted the beads as part of a film set.
I found a convenient location near the bow of the vessel, dug a small hole in the sand, placed the beads in the hollow, and covered them with some more sand.
As I turned to wave at Emi to start filming, I looked back at my patch of sand and realised, with considerable anxiety, that I couldn’t see where I had buried the beads! The silt I had raised had covered the area completely.

MY BREATHING RATE shot up, but I tried to remain calm and, within a few seconds, I was lucky enough to find the right place. It’s lucky my eyes were shielded from the camera by the mask, because my expression would have been one of great relief rather than surprise.
Back on the RIB after a lengthy bout of decompression, I told Emi what had happened, and discovered that I needn’t have worried too much, as he had a spare set of rosary beads in his BC pocket anyway. Good producers anticipate such silly mishaps.
Just before we got back onto the boat, I had a couple of lines to say in front of the camera (a speaking part!) while bobbing at the surface.
They were essentially about my finding the rosary beads, and how this set me thinking about those poor brave souls who lost their lives serving on such ships.
I have no illusions of ever coming remotely close to an Oscar or BAFTA, but I felt I had given a mildly decent interpretation. Of course, my dive-buddies on the RIB thought otherwise, and there was much levity about my future acting prospects. They even had the temerity to suggest that I buy another dive-mask, as my own would no longer fit my elongated Pinocchio nose!