‘Orcadians still live daily with the consequences of the scuttling of the German Fleet almost 100 years ago.’ So says ROD MACDONALD, and with that centenary looming a special sixth edition of the ace wreck-diverâs classic guide Dive Scapa Flow is published this month, complete with jaw-dropping new illustrations. Here is Rod’s evocative introduction to one of the world’s greatest dive-locations 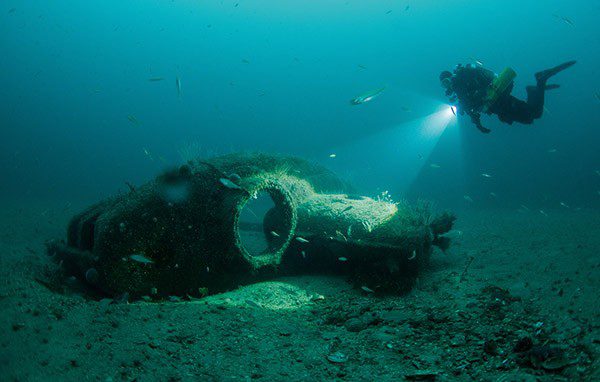 SCAPA FLOW IS A DRAMATIC and windswept expanse of water some 12 miles across that is almost completely encircled by the islands of Orkney. On the land all around there are poignant reminders of Orkney’s wartime past – deserted barracks, airfields, the remains of PoW camps and gun emplacements all bear silent witness to its military history.
For centuries Scapa Flow had been a safe, sheltered anchorage for mariners. Captain Cook’s ships Discovery and Resolution called into Stromness in 1780 on their return from the South Seas, where Captain Cook had been murdered.
Whaling ships bound for the Davis Strait began calling into the harbour in the 1770s, and Hudson Bay Company whaling ships had a strong presence and permanent agents in Stromness to sign up the capable seafaring Orcadian men, who were ideally suited for life on the whalers.
In 1914, at the outbreak of World War One, Scapa Flow became the home base for the Grand Fleet, and in 1917 the Lyness Naval Base was established on Hoy with four oil tanks with a capacity of 12,000 tons.
A further 12 tanks holding 15,000 tons each were built from 1936 onwards, and six huge oil tanks were constructed inside Wee Fea hill with a capacity for 100,000 tons of oil.
A large quay where ships could dock to refuel was constructed, using the spoil from the tunnels, and acquired the nickname the Golden Wharf.
In 1938, as war loomed once again, Scapa Flow was designated the Main War Base for the Home Fleet. It is a naval convention that all naval shore bases are named as ships – the Lyness Naval Base was designated HMS Proserpine and by 1940 accommodated over 12,000 military and civilian personnel, and had its own cinema, theatre and churches.
A fortified communications centre was established high up on Wee Fea hill that kept the naval base and the fleet in touch with the outside world.

IN A SINGLE, momentous event on 21 June, 1919, the 74 interned warships of the Imperial German Navy High Seas Fleet were scuttled at Scapa Flow to avoid them falling into British hands. It was, and still is, the single greatest act of naval suicide the world has ever seen. Seventy-four great warships slowly sank to the bottom of the Flow to litter the seabed.
Initially, the Admiralty resolved to leave the sunken fleet to rust on the bottom of Scapa Flow forever.
After the end of World War One there was so much scrap-metal about that it was not economically viable to salvage them.
By the 1920s, however, the price of scrap had picked up and the attention of salvors turned to the seemingly endless supply of best German scrap-metal lying at the bottom of Scapa Flow.
Over the course of the coming decades, the majority of the warships were raised, leaving today eight complete ships of the original High Seas Fleet on the seabed waiting to be explored. They are the 26,000-ton battleships König, Markgraf and Kronprinz Wilhelm, the 5000-ton cruisers Dresden, Brummer, Cöln and Karlsruhe and the 900-ton destroyer V83.

THERE ARE ALSO smaller parts left over from other German ships that were broken up – and great depressions in the seabed from where the larger ships were raised. These depressions are known locally as the scrapyards, and are littered with bits and pieces that had rotted off or been cut off those ships before they were lifted to the surface. There is also a WW1 U-boat, unconnected with the scuttling of the fleet – the last U-boat sunk in action during WW1.
Over the years, many other vessels have come to grief in Scapa Flow – both military and civilian. Trawlers, drifters, steamships and a tanker have succumbed to fierce northern gales, or been rammed and sunk by accident.
The scale of human loss in Scapa Flow is huge – the two largest losses of life both being on RN warships, HMS Vanguard and HMS Royal Oak.
The 19,560-ton British battleship Vanguard was destroyed in a cataclysmic magazine explosion on 9 July, 1917, with the loss of more than 700 men.
HMS Royal Oak was sunk in the dead of the night of 13/14 October 1939 when, in a daring piece of seamanship, the German submarine U47 successfully slipped through British defences into Scapa Flow and torpedoed the 29,000-ton British battleship at anchor in Scapa Bay.
The torpedo explosions destroyed the power circuits, and the whole of the ship below decks was pitched into darkness.
Desperately the crew stumbled around, groping in the darkness for a way out as the ship keeled over – while flash fires of burning cordite swept around the corridors like balls of flame.
Royal Oak turned turtle within five minutes and sank in just over 30m of water with most of her crew still trapped inside her. In all, 833 officers and men died in that one attack. (These two latter wrecks are war graves, and Orkney Island byelaws prohibit diving on them.)
During the World Wars One and Two, “blockships” were sunk in the eastern and western channels leading into Scapa Flow – to place immovable and insurmountable barriers in the way of any enemy vessel trying to get into the Flow to attack British naval vessels.
Today this concentrated profusion of wrecks in one relatively small area has made Scapa Flow one of the top wreck-diving locations in the world. Where else can you dive on such a collection of German warships from WW1 within a single hour’s boat trip from land?
Thousands of divers visit Scapa Flow annually from all over the world – diving has become big business in Orkney and has contributed significantly to its economy since the 1980s. The local Orcadians still live daily with the consequences of the scuttling of the German Fleet almost 100 years ago.
There are around 10 full-time comfortable and well-equipped dive-boats operating in the Flow throughout the year, each able to take 12 divers out to the wrecks.
Quite simply, the dive-boats nowadays have everything you will need for a diving trip to Scapa Flow.

THE GERMAN HIGH SEAS FLEET wrecks lie in 30 to 45m of water – with average underwater visibility of 10-15m.
The main German wrecks are now all permanently buoyed, and once you are in the water, the line that leads down to the wreck from the buoy seems to disappear straight below into infinity in a dark, bottomless pit – the wrecks are far below out of sight.
The descent to the wrecks seems to take forever – and as the distance from the surface increases, so the natural light fades. Slowly the gloom below seems to acquire a form, as the huge shape of the wreck materialises out of the darkness.
The German wrecks either lie on their sides or upside-down, so it is usually a flat piece of hull that comes into view first.
The cruisers all lie on their side, allowing divers to swim to the side of the hull and look down the now-vertical deck.
Because of their size, the wrecks cast a considerable shadow and, on the dark side, the vertical main deck disappears seemingly into pitch-blackness.
Summoning up courage – and dropping over the side and free-falling down the vertical main deck, eyes become accustomed to the darkness and soon divers can drift spellbound over the colossal German warships.
Everywhere there is something to hold your interest: sleek cruiser bows designed to slice through the water; gun-turrets looming up out of the gloom and anchor-chains run out from their chain lockers to steam-driven capstans – before dropping down to the seabed.
Armoured fire control towers sit in front of bridge superstructures, ringed with viewing slits, some still with their glass in place.
Immediately behind bridge superstructures, lifeboat davits hang empty – the lifeboats themselves lowered over the side by the German sailors as the vessels scuttled. Rows of portholes line the hulls and the wrecks are festooned with a rich carpet of marine growth.
The cruiser wrecks have opened up a lot in recent years, allowing divers to move inside their remains and explore areas of the wreck that were inaccessible in years gone by.
The massive upside-down battleships, great man-made mountains, still hold their form and offer many opportunities for serious wreck penetration.
Great care must however be exercised, and only properly experienced, trained and equipped divers should consider penetrating the cavernous interiors of these wrecks.
Fine silt layers the corridors inside, and careless finning easily stirs it up. Divers can become engulfed in a cloud of silt and the visibility can quickly be reduced to nil.
In this situation it may be impossible to find your way out and panic will quickly set in. There have been a number of diving fatalities at Scapa Flow.

ALL TOO SOON, it is time to ascend. As you rise slowly upwards, the now familiar lines of the warship blur and then once again merge with the background as you leave this silent, eerie world far below and return to the surface and daylight.
Once you have dived Scapa Flow you will always hanker to come back – its attraction is mesmerising. The wrecks are so big – on average 150 to 180m long – that on one dive you may elect to skim round the whole wreck to get an overview.
On other days you may elect, particularly on the battleships, to take time to explore a small part of them in detail, such as the big 12in guns that fired at Jutland, or the “gun runs” of the seven smaller 5.9in casemate guns along each side of the battleships.
It takes dozens of dives on any one wreck to really get to know it. With the unequalled profusion of wrecks at Scapa Flow, you will always leave at the end of your dive-trip with many of the wrecks undived.
Quite simply, Scapa Flow offers some of the best wreck-diving in the world.