Three remote areas, three different seas, mind-boggling biodiversity – only a liveaboard trip could deliver PETER DE MAAGT to visit some of those hidden gems of Indonesia that are rarely visited but which richly repay the effort 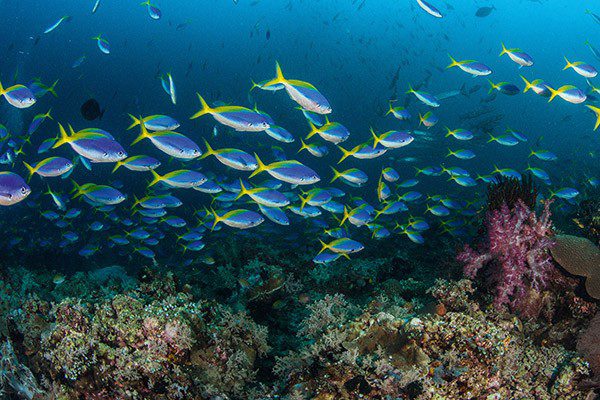 “SNAKES, WHY DID IT HAVE TO BE SNAKES?” Those of you with a few grey hairs will remember the line from Raiders of the Lost Ark.
Indiana Jones discovered that, when he threw his torch down into the Well of the Souls, the floor was alive with poisonous asps. Most folks would recoil from this sight, but not divers, who are often drawn to such adventure.
Welcome to the Banda Islands, one of Indonesia’s underwater gems, where snakes are not just a figment of fevered Hollywood imagination. Here, you will find an actual island of serpents!
To reach this location requires deviation from the usual travel route and dive schedule. Would we mind skipping the afternoon dive to set sail towards Manuk volcano, a tiny speck in the middle of nowhere?
Our tour guide explains that, on top of this, the captain of our liveaboard, the Mermaid II, might decide to take a turn in the middle of the night and go to the Banda islands instead. The divers are in doubt: why skip a dive in heavenly Misool?
Our guide insists that Manuk Volcano is considered an option only in favourable weather conditions. Rough seas and the fact that it is at least 100 nautical miles off the usual itinerary makes it less attractive for operators to consider. She stresses that it would be an experience to be treasured.
The group agrees, with some hesitation, to make the side-trip. Little do we know what lies in store for us.
Next morning, we wake to the odour of sulphur, and see steam escaping from the medium-sized volcano. It is inhabited by several large colonies of birds. At first impression, Manuk seems to be just another volcanic island far from human contact.
Our first plunge into these waters reveals characteristics of a volcanic zone; we can see the bubbles surfacing between the rocks. Then I notice something swimming towards me from the surface: a large Chinese sea snake.
It is soon joined by another and another. Suddenly I realise that they are everywhere – napping between the coral, swimming upwards to get a breath, frolicking in midwater.
Should I ascend? “Snakes, why did it have to be snakes?” Escaping seems impossible, as I try to remember what the briefing had recommended for evasive manoeuvres. I can’t recall, but it soon becomes clear that these sea-snakes are not aggressive.
As a matter of fact, they seem to enjoy sneaking up on us from behind and swimming between our legs. We simply can’t avoid them if they want to inspect us.
Although there is plenty to see, including shoals of barracuda and huge barrel sponges, the sea-snakes are clearly the stars of the show.

WHY DOES THIS TINY ISLAND have such a large population – thousands of Chinese sea-snakes together with the odd banded sea-snake?
Who cares! We’re in the middle of an episode from Planet Earth, the stuff that nightmares are made of.
Manuk isn’t the only underwater gem we visit on our Raja Ampat / Banda Sea / Ambon itinerary. If you’re willing to leave cellphone signals behind, you can visit Koon Island, a seamount in the most south-eastern part of Seram. About 100 nautical miles from civilization, Koon Island will liberate the explorer in you.
A plateau with drop-offs that seems to act as a fish-magnet, the island has a site aptly named Too Many Fish. You can imagine what we encounter. The reef is arrowhead-shaped and the currents coming from both sides aggregate large schools of fish, just at the tip.
Unfortunately the “ever-present” current is not as present as the term might imply when we drop in. We see plenty of shoals of barracuda, fusiliers, jack and batfish, but the lack of current makes it easy for them to move around the reef so they’re a bit skittish, making good photography a challenge.
Nonetheless, everything is present in abundance. The reef in the shallows is healthy and vibrant with life such as turtles snacking on large parts of the reef. Napoleon wrasse move in and out of sight, and triggerfish protect their territory.
Large gardens of hard coral can be seen, and several small bommies form a perfect hiding-place for moray eels. As weather may change rapidly in this part of the world, we are forced to return, with mixed feelings, to the Banda Islands.
These tiny, remote islands offer far more than diving. They have had a long and fascinating history. Their impact on Europe was immense, because they were at the centre of spice trade – they were known in the old days as the Spice Islands.
The region was occupied by Portugal, Spain, the Netherlands and Britain at various times, but it was the Dutch and British traders who seemed to have the most insatiable hunger for spices.
Although the Dutch dominated most islands, British trader James Lancaster took hold of a single Banda island to break their monopoly. The rivalry was settled by a significant moment in history; an ownership exchange of that British-conquered “Run Island” with the Dutch New Amsterdam – now better known as New York.
So, we make the effort and spend a morning walking around the village of Banda Naira with a local guide, and visit the local museum, the old Dutch fort, the colonial governor’s house and the fish-market.
If you want to go all out, breakfast at a nutmeg plantation is a must.

MANY OF THE DIVE-SITES around the Bandas are wall-dives covered in massive gorgonians, soft corals and barrel sponges. Run Island typifies the diving. Thanks to its remoteness, Run and the little island of Nailaka offer outstanding reefs and large quantities of fish.
The reef slopes gently down to 5m and becomes a wall dropping to 30m. The wall is covered in beautiful corals with some huge seafans, a variety of colourful coral fish and several overhangs to explore.
But there are also other attractive sites such as Pohon Mering, which has a steep slope and a straight and spacious 15m-long swim-through full of gorgonians that exits next to a beautiful wall covered with seafans and huge sponges.
Batu Kapal is a rock sticking out of the water north of Pulau Pisang. The largest formation starts at 8m and is connected to the next-deepest formation at 15m. The depth of the valley formed between them exceeds 50m, and huge gorgonians and barrel sponges grow on the colourful walls.
Some of the biggest moray eels I have ever seen can be found sticking out of holes, and the large barrel sponges host particularly enormous specimens.
The Banda Sea also provides great muck-dives, including with mandarinfish at the local jetty, where divers can witness their daily mating activities.
I wouldn’t classify Ambon, where the trip ends, as a “rarely dived gem” but it is special in its own right. The names of certain fish species, such as the Ambon scorpionfish and the Ambon cardinalfish, hint as to why. Some divers go there merely to see the recently discovered psychedelic frogfish.
Bluntly put, Ambon is critter heaven. The most interesting spots are on the shore of the huge Ambon Bay.
The underwater topography is typical for muck-diving: old tyres, metal, plastic sandals, beer-bottles and all the other rubbish that can be tossed into the ocean.
The real muck can be found in Laha harbour, where the sites have unevocative names such as Laha I, Laha II, Laha III and so on. Laha is the muckiest of muck-dives, and between every piece of rubble in this junkyard you can find living jewels.

THE SITE CONSISTS OF A SLOPE starting from only a few metres deep, overgrown with a few simple broken-up corals and rubble substrate.
As we comb the bottom, we come across everything from wunderpuses to seahorses, from harlequin shrimps to ghost pipefish, several species of devilfish and numerous colourful nudibranchs.
At the jetty, closer to the harbour of Laha, brightly painted fishing-boats tie up. Mimic octopuses and flamboyant cuttlefish hide between timber planking, tin-cans and even fish cadavers thrown overboard from the boats.
The night-dives have a reputation of their own. As soon as darkness falls, the site is transformed. Bizarre-looking creatures emerge from their daytime hide-outs to roam the seabed, either swimming freely or crawling across the sand in search of prey.
In a single dive, I saw more critters than could be written on an underwater slate; a pair of harlequin shrimps devouring a piece of seastar, several seahorses, Donald Duck and marbled saron shrimps. We even discovered an “undescribed” shrimp that was new to our dive-guides.
For a change from muck-diving you could dive the Aquila wreck (originally the Duke of Sparta), identified in 2009.
At 134m with a 17m beam, the vessel offers divers a lot of space to explore, but it is relatively deep, because the foredeck starts at about 30m.
Don’t expect amazing visibility either, because the wreck is close to the harbour and in the middle of the shipping lane, but it is covered in pink coral that attracts hundreds of fish species.

A FEW HOURS LATER WE’RE BACK to what Ambon is really all about, muck-diving in the rubbish, but it seems that our guides have saved one of its treasures for our last dive – Rhino City.
This site lies west of Laha and is an extension of the same sandy slope and hosts an enormous variety of critters.
It could easily have been called Laha X+1 but it’s named after the Rhinopias scorpionfish.
We find not one, not two but three Rhinopias. First we see a red one, then a lacy and, the highlight, a “green” one. It’s unclear why this animal is referred to as green, because it seems to contain all the colours of the rainbow.
This spectacular site has yet to sink into our brains when 15 cuttlefish move past together. Seconds later, our guide has to fight off a triggerfish attack: the grand finale of a trip filled with cultural, historical and natural wonders.
The guides stress several times that the trip covers diving in three completely different areas – Raja Ampat, the Banda Sea and Ambon – and three completely different seas: Halmahera, Ceram and Banda Sea. They emphasise that “the biodiversity should be amazing”.
But as the trip unfolds we hardly have time to think about theoretical details, such as that the three seas have different season and corresponding plankton levels. We’re too busy looking at the “Santa Claus pygmy”, or night-diving to look for the endemic epaulette “walking” sharks.
Forget the theory, just have a blast and enjoy every second diving these underwater gems.