Dangers and delights at Aliwal

Dangers and delights at Aliwal

MELISSA HOBSON hoped the reality of diving the Aliwal Shoal in KwaZulu Natal, South Africa, would live up to her high expectations – but quickly encountered even more drama than she had bargained for 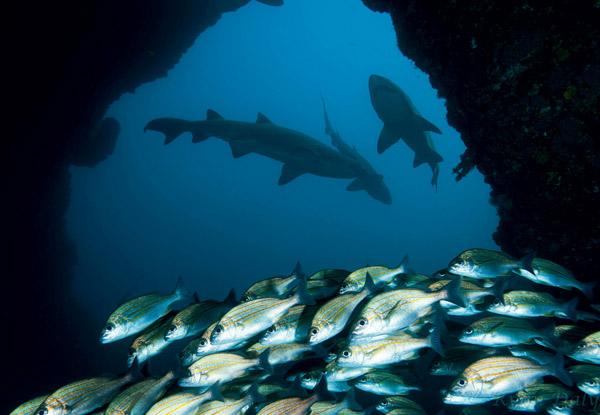 DRIVING INTO THE QUIET seaside town of Umkomaas, some 30 miles south of Durban, it quickly became clear that there is only one reason to visit this sleepy and seemingly deserted town – diving.
A town of this size boasting more than 15 dive operators and a variety of accommodation – with any other type of entertainment a substantial drive away – raised our expectations even further.
We had come to one of the most popular dive destinations in South Africa, the Aliwal Shoal, which was waiting for us three miles or so offshore. The reef is named after British ship the Aliwal, which very nearly struck it in 1849.
After the near-collision, Captain James Anderson wrote a letter to warn other ships of the “very large and dangerous” uncharted reef. For the next 100 years it remained unexplored, but when recreational divers did begin to visit in the 1950s, its reputation soon spread.
As we clambered onto the 8m RIB, our skipper Keith handed out life-jackets and told us to tuck our feet into the foot-straps, warning us that we were in for a bumpy ride. And what a ride!
The boat carefully wound its way around the Mkomazi river-mouth to find its best route out to sea. Suddenly, Keith revved the twin 85 Yamaha engines and we raced towards the ocean, battling through the breaking surf.
Gripping the rope tightly, I was forced by the waves repeatedly slapping me in the face to squeeze my eyes shut.
When I managed to blink the stinging salt water from my eyes, I saw the divers on the opposite side of the boat doubled up and shaking with laughter. I was on the “wet side” of the boat, and they were as dry as a bone. Not for long!

ENERGISED BY OUR exhilarating start, we were ready to drop down the descent line for our first taste of Aliwal Shoal.

The remains of a bed of sand-dunes from thousands of years ago, this rocky reef is nearly a mile wide and three miles long, running north-south along the inner edge of the Mozambican current.

Inhabited by many kinds of coral and a huge array of marine life – including large predators such as grey nurse sharks – the area was given protected status in 2004.

We started at one of the most popular dive-sites, the Cathedral. With a maximum depth of 27m, divers can’t spend too long in the cave before reaching no-decompression limits.

But it’s quality, not quantity, that counts, and even a short time spent at this site will reveal something amazing.

The water temperature was around 22°C and the visibility 12-15m, although we were unlucky to have just missed several days of 20m-plus vis. We settled at the base of a huge archway, the natural entrance to an open-roofed cave, to look for sharks, rays, cuttlefish and other species common here.

My buddy was watching a shark several metres away outside the cave – his first-ever shark sighting.

Pointing excitedly to the undulating tail disappearing into the distance, he was blissfully unaware of a much closer sighting less than a metre behind him.

I pointed, he turned, and a flurry of bubbles burst from his regulator as he came face to face with a huge, grinning mouthful of fearsome teeth.

This was the star of the show – and what divers come to Aliwal to see – a 2m grey nurse shark. The locals know them as raggedtooth sharks, or raggies, after the three rows of sharp, jutting teeth that protrude from their mouths like cactus spines. They swim with mouth open, so my buddy saw an impressive display!
Despite its formidable appearance, this is a relatively docile species of shark, and no human fatalities have ever been reported.

Sadly, however, the species is listed as vulnerable by the International Union for Conservation of Natural Resources, which means it is at high risk of extinction.

THE SIGHT OF OUR FIRST RAGGIES wasn’t to be the most dramatic part of our dive, however. The huge grins on our faces as we ascended were swiftly wiped away as we realised that someone was missing.

While we had been swimming with the sharks, a diver had become separated from the group and ascended on her own. Watching from the boat, Keith had noticed one bubble stream going in a different direction, and was surprised to see a diver surface only moments later.

We had been diving at around 26m, so she must have shot up like a rocket.

As he helped her to clamber into the boat and checked that she was OK, her buddy surfaced too. Seeing that she was back safely on the RIB, he returned to the group to tell our instructor she was OK.

But very soon after that, Keith tugged the buoy rope to tell us to abort the dive – first once and then, as we were still taking our time to ascend, several times more, urgently.

On reaching the surface, the diver had assured Keith that she was OK and had not come up too quickly. But once on the boat, she seemed confused and admitted that she didn’t know at what speed she had come up, only that it was fast.

She also complained of feeling nauseous and having a sudden, terrible headache. Recognising the obvious signs, Keith acted instantly.

Decompression illness. It’s something every diver is trained to avoid, and here we were coming face to face with exactly why.

FIGHTING THE HUGE surface swells, we tried to haul our kit, and ourselves, back onto the boat as quickly as we could.
A sense of urgency hung over us as we sped back across the rough seas.

One diver leant over the side, blood pouring from his nose as he tried to stem a nosebleed. His buddy, struck by seasickness, retched and gagged over the other side.

But however bad the vomiting, it couldn’t come close to the bends.

The casualty was curled in the foetal position, clutching her head in agony. Luckily, she was still conscious and responsive. Our dive-instructor Riaan fitted her oxygen mask while Keith radioed for an ambulance.

We had to get her back to the shore for medical treatment as soon as possible, and tore through the waves with no regard for finding the smoothest route.
Clutching the rope and dodging flecks of vomit, I fixed my gaze on the horizon, desperate to fight off nausea.

The mouth of the river had closed, so we had to ram the RIB straight onto the banks of the shore. The wind tore at our hair and faces as we got up to top speed, fast enough to slam the boat straight into the sandbanks. We jumped out and carried the injured diver to where the ambulance, and her fraught parents, were waiting.

A few days later we heard that the diver had been discharged from hospital. She had spent several hours in the chamber and a couple of days in intensive care.
We can’t praise Keith and Riaan enough for their professional, quick behaviour. In an intensely stressful situation, they stuck to their training and did everything they needed to do.

They definitely deserved a few beers (or something stronger) in the bar that night.

The BSAC Diving Incidents Report for 2014 showed that “most of the incidents reported… could have been avoided had those involved followed a few basic principles of safe diving practice.”

We still don’t know exactly what happened, but this experience reminded us of the importance of sticking to your training!

MEMORABLE FOR FAR BETTER reasons, our second dive was at Raggie’s Cave. At a maximum depth of 18m, its caves, gullies, swim-throughs and spectacular raggie viewing area make it one of the most popular sites at Aliwal.

Despite being out of raggie season, there was still plenty of life. As well as the grim-toothed raggies, we found a pair of lobsters lurking in the crags of a rock, several surly-looking, venomous stonefish, and an impressive shoal of dusky sweepers.

Not to mention the large blotched sting rays wriggling under the sand to conceal themselves. Or the giant moray – the biggest I’ve ever seen – with two cleaner shrimp in its menacing jaws.

Just beyond the moray, the sand began to squirm and a guitarfish emerged and darted away as we approached.

After watching a hawksbill turtle determinedly battling the surge, swaying back and forth as it tried to munch on food it had found in the crevice of a rock, we were getting low on air and it was time to ascend.

A few metres from the surface, we heard the distinctive clicks and squeaks of dolphins. We tried desperately to follow the sounds, but they remained just out of sight until the noises faded into the distance. Admitting defeat, we returned to the boat.

As it’s so incredibly rare to see dolphins on a dive, we tried not to be too disappointed.

But we received compensation during the week with sightings of boxfish, giant starfish, multi-coloured nudibranchs, white paperfish, Moorish idols, needlefish and ember parrotfish, to name only a few.

OUR FINAL DIVE was quiet compared to the rest of the week, though not literally so – on several occasions during our week at Aliwal we had heard the booms of what we at first thought was a revving boat engine. We now knew that these rumbles accompanying our dives were whale song.

Despite the impressive soundtrack, we saw very little other than one last raggie, and it didn’t hang around for long.

As it swished its tail and disappeared behind a rock, we heard again the tell-tale sounds of dolphins. We looked around desperately, knowing that the pod would be tantalisingly just beyond our 12m vis reach. Would we be disappointed again?

Suddenly there was a flurry of movement, as 20 tails whizzed past us. Despite the number of dolphins we had glimpsed on the surface from the boat during the week, we hadn’t expected to be lucky enough to see them under water.

Kicking our fins frantically, we were able to swim alongside and keep them in sight for a fraction longer.

But they were in no mood to play for long, and we were soon left gazing after them, our giggles of delight creating a cloud of bubbles.

It was the perfect last dive in South Africa (for now). Ascending to the reverberations of whale song, I was already wondering how soon I might be able to return to the incredible Aliwal Shoal.