Diver finds WW2 mine off Cornwall

Diver finds WW2 mine off Cornwall

A large explosive device found by diver Mark Milburn half a mile off Maenporth beach near Falmouth in late November turned out to be a WW2 German “G-mine”, or parachute mine. 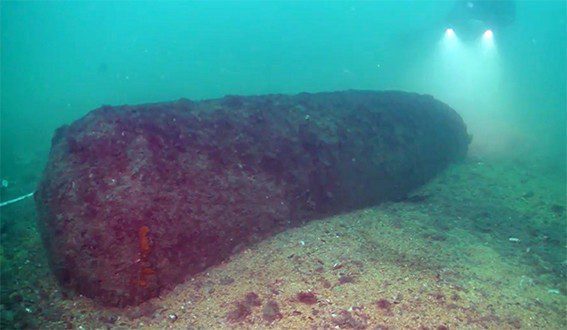 Milburn filmed the device and after the dive called the Coastguard, who referred his find to the Royal Navy.

The Coastguard and Falmouth lifeboat established a precautionary 1000m exclusion zone around the area while waiting for the RN Explosives Ordnance Disposal Unit to destroy the 1000kg device – which it did successfully on 29 November.

Milburn, who runs the Atlantic Scuba dive-centre in Penryn, says he has found similar devices under water before.

Parachute mines dropped by Luftwaffe bombers were able to detonate before hitting the ground to cause maximum damage. With a G-mine, a concealed photo-electric sensor could set it off should it be exposed to light during bomb-disposal operations.

Large numbers of bombs and mines were dropped near Falmouth during WW2 and more could remain undetected, warns the Coastguard. It advises anyone finding one to stay clear and do as Milburn did by calling 999.