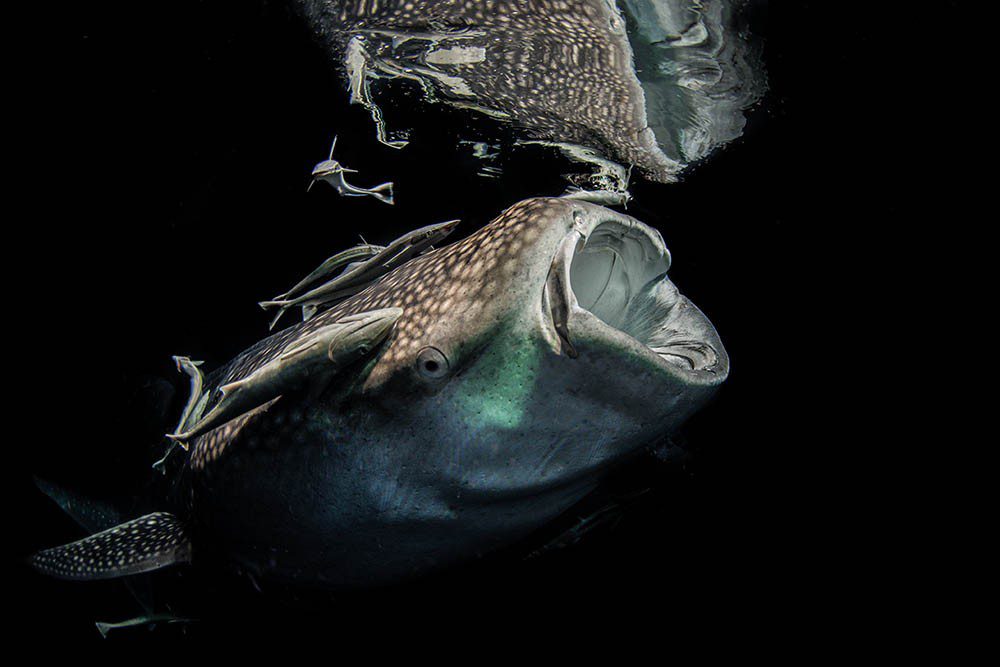 NIGEL AND I HAD MET several years ago, in Egypt. At first, I didn’t quite know what to make of this little guy and his never-ending, albeit hilarious, accounts of his exploits as a fireman. His laughter was infectious and our like-minded sense of humour and shared interests acted as a catalyst to form a very special friendship.

He was a genius photographer and always happy to share his knowledge and offer tips. Nigel and I shared a passion for photography, though I was nowhere near his level, and he would never tire of giving me helpful guidance and advice.

On this trip, once again, my photography took a dramatic step forward thanks to his patience and ability to explain the finer points.

It’s rare to meet someone and “click” in such a profound way. Our friendship just kept getting stronger, and I can honestly say that I have never met anyone like him and, sadly, never will again.

OUR LAST TRIP TOGETHER started when another great buddy and travel agent John Spencer Ades, called me about a trip to the southernmost atoll in the Maldives. Suvadiva is the second largest atoll in the world, about 1° north of the Equator.

It was a little-known itinerary and promised to be something special. Sharks, whale sharks, untouched reefs, luxury liveaboard – oh, and Nigel Wade would be on the trip too. I didn’t take much convincing.

I asked John not to tell Nigel I was coming, as I wanted to surprise him at the airport. The look on Nigel’s face when I barged in front of him with my dive-gear-laden trolley was priceless. His mouth resembled that of a fish, opening and closing yet emitting no sounds – a rarity.

Finally, a huge WTF!, followed by a bear-hug. The plan had worked to perfection and the trip was underway.

The long flights passed quickly and soon the three of us were aboard the Duke of York, the luxury liveaboard that would be our home for the next week. This 36m, three-deck super-yacht was well-equipped to cosset its guests. 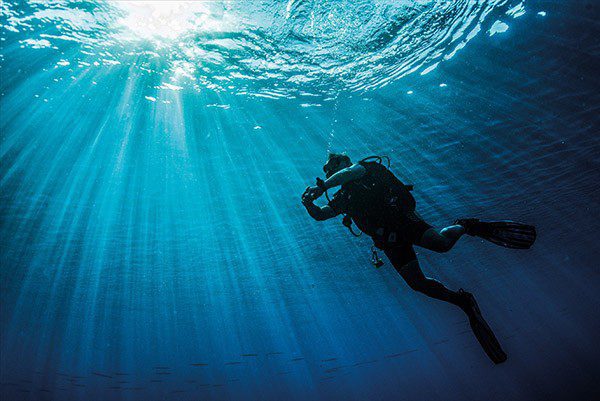 Working with the light.

Recognising our zombie-like demeanour, the crew quickly showed us to our respective cabins so that we could freshen up and possibly push up a few Zs. I was pleasantly surprised by my cabin’s size and décor. It was beautifully appointed, with plenty of space to spread out. The en suite bathroom would not have looked out of place in a small flat.

I have been on many diving liveaboards, but this one was in a class of its own. It is Italian-owned and managed, and in typical fashion you are immediately made to feel welcome – an experience rather like visiting your favourite Italian restaurant.

In his inimitable way Nigel made sure he made himself known to all the crew, but in particular to the chef.

Being a fussy eater, he needed an ally in the galley. Sure enough, at every meal “Nige’s dish” would be served.

It is not uncommon to have non-diving guests aboard the Duke of York, and the crew are only too happy to arrange a variety of activities for them, such as snorkelling or kayaking, or even drop them off on a secluded island for that Robinson Crusoe experience.

Later, the tender will whisk them back to the yacht in time for cocktails and another lavish meal.

For those who need to de-stress and unwind, a treatment room is at their disposal. Enrique the resident yoga instructor and wellbeing therapist has a number of different treatments and massages on offer.

I often get a bit of a stiff back after diving, so what better than a massage with an ocean view as your mind drifts away? Enrique also runs yoga sessions for both beginners and the more experienced on the vast upper deck, a tranquil haven for sun-worshippers.

THE DIVE-BRIEFINGS ARE DETAILED and well-executed. Stress is laid on awareness of the often-strong currents and the need to be equipped with a rock-hook.

All the dive equipment is kept aboard the Duke of York’s dhoni, which came alongside to take us to the dive-sites but kept at a distance while all the noisy cylinder filling and kit-cleaning took place – a regal solution.

Although exhausted from the trip, we kitted up and reluctantly (slight exaggeration), jumped into the sea the day we arrived. I don’t remember much about that dive except for Nigel’s excitement at having found a bommie engulfed by glassfish, one of his favourite photographic subjects.

He later explained how hard they are to photograph and the best technique to use. If done right, he said, spellbinding images could be achieved. Not having brought our cameras on the dive, we were reassured that the site would be revisited later that week.

Our first three dives left us lost for words – and also rather worried. The coral bleaching caused by prevailing warm sea temperatures was extensive and Nigel was wondering what on Earth he was going to write about for DIVER.

Luckily, the scare was short-lived. As we sailed further south, only by about 10 nautical miles to Nilandhoo Kandu, normal service was resumed, and amazing colours and reef life abounded.

THE DAILY ROUTINE was to do one dive before breakfast, one before lunch and one in the afternoon, with plenty of time to relax in between.

What makes diving in this area of the Maldives so special? The answer is its wild, natural beauty. At their best the underwater topography, colourful corals and wildlife are wonderful.

There is something very raw about diving on this particular itinerary off the beaten track. As only a handful of dive boats come this far south the fish are not accustomed to divers, so you experience their natural and instinctive behaviour.

Some dive-destinations will feed sharks to keep them in a localised area, but here you experience them in their natural state. On one of the dives, we witnessed hundreds of schooling sharks effortlessly swimming in the current. 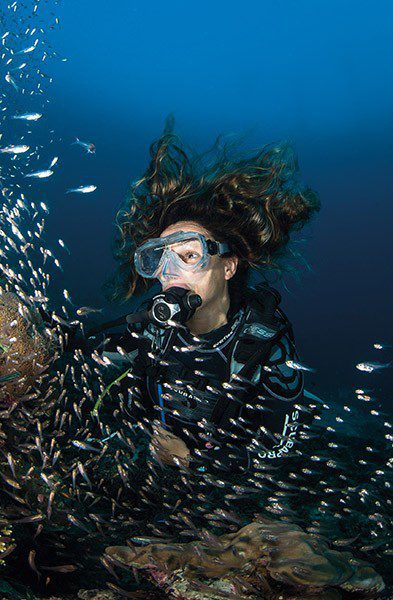 Getting glassfish to work for the photographer.

We ventured towards them, and the closer we got, the more sharks appeared from the blue. It wasn’t the kind of shark-diving where you are surrounded and able to indulge in close-up photography, but it was an impressive natural spectacle.

I have rarely laughed as much as I did on this Maldives trip. Nigel and I would spur each other on and generally joke around, but as always he would get serious when it came to taking pictures.

One evening, while enjoying a sundowner on deck, he instilled in me a lesson he had learnt from one of his peers: “Get the shots, then relax.”

Wise words, because you can never be sure what the sea will be like tomorrow.

Our guides Monica, Asia and Margherita would ask what we wanted to see and, as if by magic, would deliver. They were not only very experienced divers and superb guides but turned out to be very good underwater models.

This is not as easy a job as it might sound but they were like bees to honey when Nigel was in charge of the camera.

Ever the professional, Nigel had had a picture in his mind of a particular shot he wanted long before we arrived in the Maldives. The subject was a whale shark, and although he knew it would not be easy to get, he had been imagining methods of how he might make it work. Of course, all this depended on a whale shark obliging us with its presence.

One night, we were blessed. Before you could say “look!” Nigel had disappeared into his cabin and re-emerged, camera in hand, in his white swim-shorts.

What ensued was among my funniest memories of the trip. Nigel donned his fins and got in. Now as a diver he was very experienced and extremely accomplished, but his snorkelling skills were something to behold.

Picture a white marker buoy being held below the surface and then released – that was Nigel. He’d dive, camera primed, and a few seconds later would break the surface, bottom-first and gasping for air.

The whole boat was in hysterics at the spectacle. It’s a memory I can’t get out of my mind, and always makes me smile.

The last laugh was his, however.

He didn’t get the shot he wanted, but nonetheless he obtained some stunning images, and was delighted with them.

WHILE REVIEWING IMAGES post-dive, I always appreciated the fact that he would be as interested and enthusiastic looking at my pictures as I would be with his.

If you recall the bommie engulfed in glassfish that I mentioned at the beginning of our trip, as promised we were taken back there. Nigel and I were both excited by the prospect, but in particular the challenge.

The glassfish didn’t disappoint; they were there in their thousands. Same format: Nigel and I would go first and he would guide me with a couple of tweaks to my strobe position and, more importantly, to my own positioning.

Back on board, we were going through my images when, all of a sudden, Nigel blurted out “Oh – what! Beautiful!” This was Nigel – his enthusiasm filled me with immense pride and confidence. I knew he had taught me another invaluable lesson.

It was an exceptional trip and an unforgettable one, but of course we had no idea that this would be Nigel’s last-ever dive trip. I’m glad it was such a good one.

I’ll sorely miss Nigel Wade, as will numerous others who were privileged enough to know him. Rest peacefully, dear friend.

GETTING THERE> The group flew to Male via Doha with Qatar Airways, then with Maldivian to Koodhoo.

DIVING & ACCOMMODATION> The Duke of York is a 36m three-decker with 10 en-suite cabins with individual climate control. Italian and Maldivian cuisine is served at the table in indoor and outdoor dining areas, luxuryyachtmaldives.com

WHEN TO GO> Duke of York runs year-round but offers the southern itinerary in March when conditions are at their best.