Unique ‘floating tanks’, relics of World War Two, can be dived from Swanage, says WILL APPLEYARD. Ideal for an early-season UK warm-up dive in this case – but they’re always ready for inspection 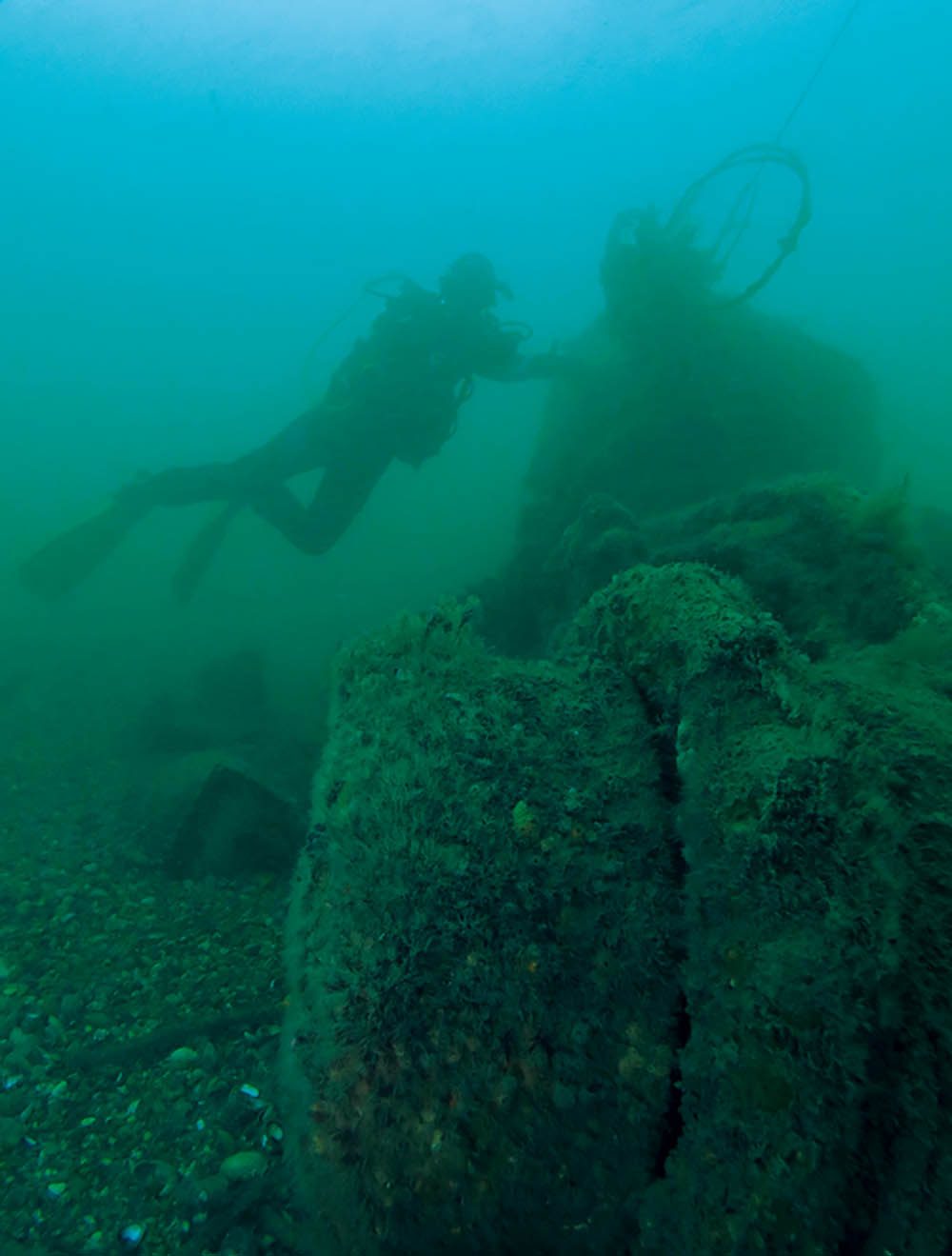 Diver beside the turret of Valentine tank number 1 off Swanage.

WE USUALLY ASSOCIATE wreckage found on the seabed with boats that have had a bad day. It might appear odd, then, that just a short boat-ride from the popular seaside town of Swanage in Dorset, it’s possible to dive the remains of several World War Two tanks.

Well, these tanks were in fact sea-going vessels in their own right. Before their demise, they were taking part in Exercise Smash around Poole Bay in preparation for the forthcoming D-Day landings of 6 June, 1944.

The idea behind the top-secret design was that a canvas frame fitted around the tank would, when raised, displace enough water to enable them to float. They were known as “DD” or “Duplex Drive” Valentine tanks, and a propeller was also mounted at the rear to move the vehicle forward and to within beach range, where the tank’s tracks would take over the job.

Today, divers usually visit only two examples of these tanks because, conveniently, one pair has been roped together to help divers to locate both on a single dive. They lie upright only 70m apart.

A condition survey by Bournemouth University confirms that in fact seven tanks exist in the area, although divers venture to the other five rarely, if at all.

I’ve been interested in the Valentine tanks for many years, but have only really scratched the surface with my own research. So when I discovered that Isle of Purbeck SAC was launching an underwater project to map the history of the sinkings in time for the 75th anniversary in 2019, I thought I’d take the opportunity to expand my own knowledge and head on down. 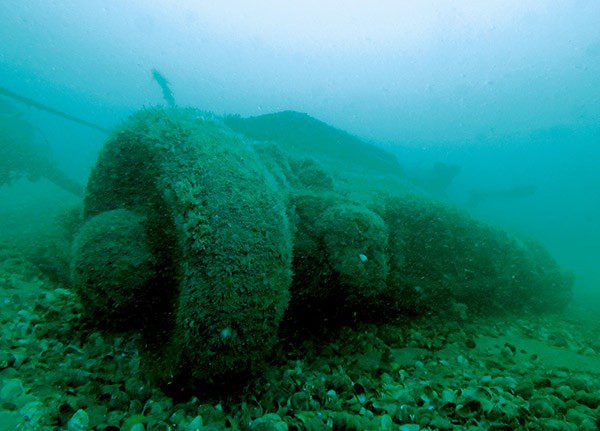 Exposed tank wheel where the tracks were driven.

The wreck-site is popular among newbie divers because of its close proximity to Swanage-based dive-centres – and the fact that the tanks lie only 15m deep. With this in mind, I took my partner Ana along to introduce her to the delights of UK diving and immerse ourselves (literally) in a piece of history.

Our visit to the tanks took place in late April, the start of the UK diving season. The water at this time of year is around 11°C, drysuit territory for sure.

The handy aspect of diving from Swanage is that it’s possible to carry out in-water weight-checks beside the pier prior to any boat-diving trips. This is an essential exercise for newbie divers, and especially those with low drysuit time.

We chose to dive with pier-based dive-centre Divers Down Swanage, although several established operators visit the Valentine tanks alongside scores of other popular dive-sites in the area.

The weather was to be on our side, and I just hoped that the visibility was with us too. Introducing newbie or “holiday” divers to UK diving can make or break their passion for diving in home waters.

To experience the really good stuff, ideally you need to dive in the UK often, and if you want to maximise your chances of some cracking underwater conditions, choose a neap tide and allow for a few days of settled weather ahead of your planned trip.

WITH ROPES OFF just after lunch that day, we rolled up to the permanently buoyed tanks within about 30 minutes of leaving Swanage. Pete, our skipper for the day, put us slightly uptide to enable us to float right on top of the mooring line.

On the way, Pete had explained that it’s always best to dive the tanks with a slight tide running, to allow any muck kicked up from misplaced divers’ fins on the seabed to clear. Let’s face it, with up to 12 divers plonked onto a tiny tank wreck, there’s going to be a silt-fest – with nobody admitting afterwards that they were the culprits, of course!

We were lucky enough to be the first on the wreck, and there was a bit of a pull from the tide once at the dive-site. 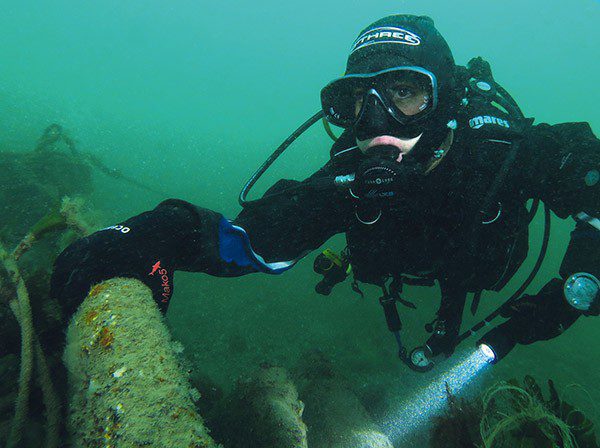 A diver approaches tank two after navigating the rope between the two vehicle wrecks.

Although the tanks are quite small, they still harbour a fascinating array of marine life. Common prawns live there – they’re inquisitive little guys, and if you hold out a bare hand, they’ll often come over and have nibble.

Where there are prawns, there is usually a conger eel lurking behind them – the relationship between them is unclear to me, but I have witnessed this behaviour on many a UK wreck-dive.

We found the battle-scarred nose of a medium-sized conger wedged inside the smallest of cracks and, just below it, the antennae of a common lobster.

Shoals of bib flitted about above the tank’s turret, which is now missing its gun-barrel. I later learnt that this had still been attached to the tank itself until very recently. Our guess was that commercial fishing gear might have knocked it off.

It wasn’t long before four more divers appeared on the first tank after their descent of the shotline, so we made for the 70m of rope that connects this tank to its brother. I think we left the visibility in good enough shape for the other guys, but it wasn’t great that day in any case (that’s our excuse).

Seventy metres feels like a long way when finning over barren seabed, but on arrival at tank two we found it to be in far worse condition than the first. As with the other tank, the wheels that drove the tank-tracks were still visible, but much of the sides and top have vanished.

The remains of the turret lie 2m or so from the main vehicle, although the gun-barrel has disappeared.

Some good-sized wrasse appeared, and didn’t seem bothered by our presence at all. Another conger and its prawn friends frequented this site too, alongside a pair of edible crabs.

ALTHOUGH I DO MY BEST while diving these underwater pieces of history, it’s impossible to imagine what it must have been like to be aboard or indeed inside one of these tanks when they sank on that fateful day.

Seven soldiers of the 4th and 7th Royal Dragoon Guards lost their lives when these vehicles made for the seabed, rough weather swamping one after another.

I later spoke about this to Nick Reed, Training Officer for Isle of Purbeck SAC and “Valentine 75” project leader.

“The exercise was observed by King George VI together with Prime Minister Winston Churchill, Supreme Allied Commander Dwight Eisenhower and General Montgomery,” he told me – so basically all the top brass in one place.

I also learnt from Nick that: “Exercise Smash involved rocket attacks and a beach assault using live ammunition in order to make the rehearsal as realistic as possible”. This exercise, I’m told, was the largest live-ammunition dress rehearsal of the whole war.

It’s a very interesting and unique dive-site, but because of their size this pair of Valentines will make no more than a 30-40 minute dive, depending on what else you find lurking beneath the waves.

It’s possible, of course, to come off the wrecks and explore further around the seabed, using an inflated SMB so that the skipper can locate you.

It’s not uncommon to find lone rays in the area if you’re willing to dedicate some time, and you should have plenty of air with which to do so at the depth.

We decided, once we’d had our fill, to send up a buoy from tank two and be picked up after our safety stop, rather than following the line back to tank one and heading back up the line on which we had descended. This is the quick and/or lazy way, but the choice is yours!

I believe that Project Valentine 75 is a great way not only to remember those tank crew lost but also to have the opportunity, as Nick puts it, “to record and preserve part of local history”.

Post-dive, he also explained that “survey work began in April 2017 and it has been noted that 80% of the tanks’ original metal thickness has corroded away”. These WW2 war machines won’t be around forever.

I also found it interesting to learn from Nick that “Studland Beach and Shell Bay, near Poole, were chosen for this exercise because they physically resembled the beaches of Northern France” – which is of course where the D-Day landings began.

The scenery around this part of the country is spectacular, and should also be considered as part of the adventure.

I’m looking forward to hearing more about the club’s findings once the project has concluded in 2019 close to the 75th anniversary.

And perhaps one day I’ll return to dive some of the other five Valentine tanks, wherever they may be!