This coldwater Pacific classic can create dilemmas for photographers, says MARK B HATTER, torn between tiny rockfish and huge ‘GPOs’ in British Columbia 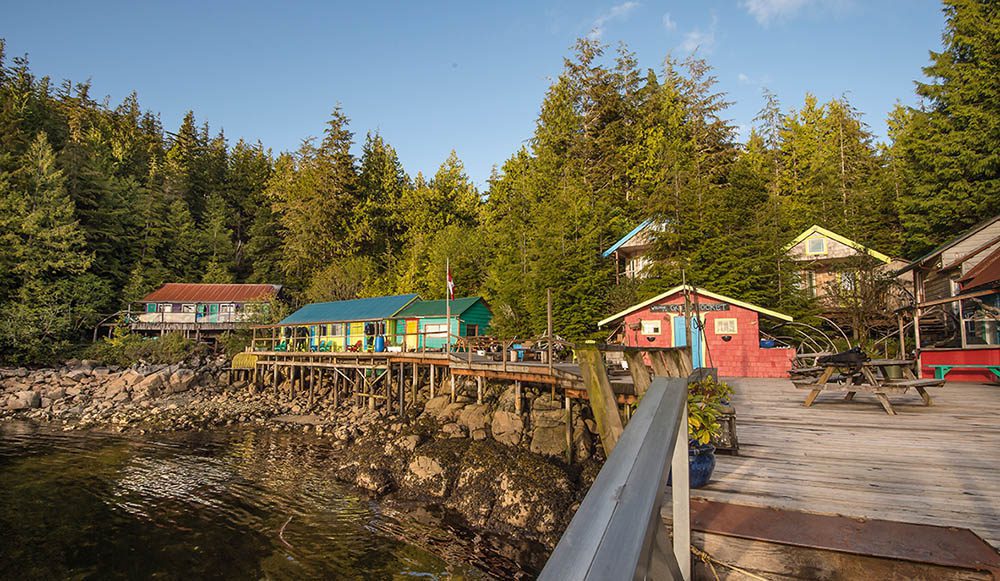 “Here is why!” the post continued, followed by several gorgeous wide-angle images of centimetre-long yellow fish streaming up the face of a vertical wall by the hundreds.

The images were posted by my diving buddy Ron Watkins, and could have come from some tropical reef had it not been for the oddly competing colours in the images. I knew better – I had been with Ron when he captured the shots.

The streaming fish were not anthias, those ubiquitous schoolers of reefs in the Indo-Pacific, but juvenile rockfish, a coldwater species that often schools.

And, as they ascended a wall carpeted with bone-white short plumose anemones, the contrasting colours between the fish, anemones and an emerald-green backdrop of cold water betrayed the marine environment of Canada’s Pacific North-west coast.

Ron and I had just returned from four special days’ diving at the God’s Pocket Marine Provincial Park in Queen Charlotte Strait, about an hour’s boat-ride north-east of Port Hardy, Vancouver Island in British Columbia. Getting there had had its complications.

With our heavy kit assembled to comfortably dive waters hovering around 8°C, we exceeded the weight limits of the uber-small commuter flight from Vancouver International Airport to Port Hardy. Ultimately, we had to accept the non-refundable ticket cost, hired a car and drove up from Vancouver, making the boat with minutes to spare. On greeting our fellow-divers at the pier we learned that no one flies – everyone drives.

Ask any Canadian or US diver comfortable in a drysuit, and they will tell you that God’s Pocket is the best coldwater diving in North America.

Ron and I can testify that the biodiversity surrounding God’s Pocket must be the coldwater equivalent of Raja Ampat in the Coral Triangle.

Indeed, dive-sites offering vertical walls, pinnacles, rockpiles, kelp-beds and more proved vexing for our trip’s photographers – having to choose between wide-angle or macro at every site became an agonising decision.

You can’t go wrong in the end, because every site offers opportunities for both perspectives. Alas, some great shots will be missed with one rig but then excellent ones will be captured with the other.

I selected macro for the dive on which Ron captured his schooling rockfish, yet nailed some nice blackeye goby images with my macro lens.

Home base for diving this remote region is the picture-postcard God’s Pocket Dive Resort, nestled on a bluff high above the tide-line in a tiny bay on Hurst Island, and aptly named God’s Pocket. 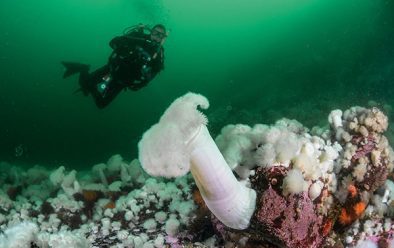 Diver with a giant plumose anemone at the Fantasy site.

Owner-operators Annie Ceschi and Bill Weeks have been running a first-class and safety-conscious diving operation there since 1998. And, though remote, the resort staff includes a top-shelf chef who can humbly explain to a culinary dullard like me the nuance between gravy (which contains beef stock) and a double-reduced sauce (which has no beef stock). In short, the food was so good that I may have said that if my wife could cook as well as chef Oliver, I’d travel less!

Our trip leader for the four-day expedition was local resident and God’s Pocket “frequent flyer” Jackie Hildering. A marine biologist, teacher and eco-ethicist with incredible knowledge of the Pacific North-west’s eco-systems, Jackie hosts two or three trips a year to God’s Pocket, and is always eager to share her deep and diverse knowledge of the region with rookies like Ron and me.

Because we knew virtually nothing about the local wildlife, we played charades with Jackie after most dives in an attempt to ID things new to us. Jackie was amazing and adroitly reduced our base descriptions of organisms to genus and species within a few questions.

The Pacific North-west is well-known for 5m tides and strong currents. It takes the decades of experience of captains such as Bill to know when and where to place divers to give them a safe but exhilarating experience. Bill was blunt with our group in the trip’s pre-briefing: “When I say the boat leaves the dock at 07:35, be on the boat ready to go or I will leave you on the dock.”

There was good reason for his curtness –  dive times at every location are dictated by tides, currents and weather conditions. To maximise bottom-time coupled with dive safety, all of these variables need to be considered simultaneously, resulting in a London Underground-like timetable.

With hundreds of islands and dozens of passages surrounding the greater God’s Pocket region, there is always a site where the tide and current are slacking, ready to change direction and prime to dive.

Finally, we’re ready to get wet and Bill takes us to a shallow, sheltered bay, allowing the group to tune weights, adjust cameras and acclimatise to the 8° water on an initial check-out.

At the end of the dive, we tell Bill that we’re comfortable and dialled in. Bill agrees, and is satisfied that we’re ready for some serious diving.

Under a smooth sea with a modest groundswell we steam to an underwater pinnacle named Fantasy. It’s well-known for the wolf-eels that live in cracks and crevices at around 20m. 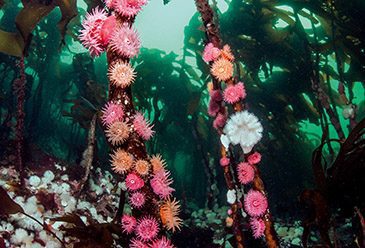 As most of the wolf-eels are too large for macro, Ron and I select wide-angle set-ups, and are not disappointed. The visibility is good for the site, perhaps 15m, but the light level at depth is low beneath an overcast sky, contributing to an otherworldly shade of intense emerald in the nutrient-rich water.

I follow Ron to the bottom and take to shooting him as he is shooting close-focus, wide-angle subjects with his mini-dome rig. The dive is mesmerising, with rocks, walls and tables along the base of the pinnacle carpeted with seemingly millions of ghostly white short plumose anemones.

Then, like giant sentinels among the smaller, uniform short plumose minions, a few giant plumose anemones extend themselves, like living watchtowers above their smaller cousins.

Anemones abound, and so do the seastars. I count at least five species in the first 10 minutes on the bottom.

At the edge of the anemone fields, the open bottom is populated with slate-coloured mussels the size of my fist. A few unlucky ones are under assault by muscular seastars, their thick arms applying a constant pull that will eventually fatigue the mollusc and lead to its demise.

Real estate is at a premium on Fantasy, and every inch of surface is occupied by something vibrantly alive.

By now we are deep into our bottom-time, and I have completely forgotten the wolf-eels, even though they are among the most iconic animals found in coldwater diving. I have just signalled to Ron my intention to work up the slope when, above a rubble pile of empty mussel-shells, I find a female wolf-eel jutting out from her lair.

She lingers just long enough for me to snap a couple of quick frames before retreating back into her recess.

Back on the boat, our group is animated by the discoveries of the dive. Everyone other than Ron and me knows their animals, it seems, and we’re leaning on Jackie for identification support, woefully lacking the basic skills required to describe the new animals that we have encountered.

One of the divers asks if anyone has found a “GPO” – aka giant Pacific octopus – on the dive. The GPO is another iconic coldwater animal, and encounters are treasured. While the cephalopod eluded our group, everyone got their wolf-eel images.

During our extended surface interval awaiting the tide change at our next dive site, 7-Tree, Jackie spots more than a dozen bald eagles, mixed with gulls and diving ducks, diving-bombing a Pacific herring school in the middle of the passage.

Bill slowly motors closer, careful not to interrupt the feeding birds, while Jackie explains the interactive biology we were witnessing. The impressive experience is yet another reminder of how remote and pristine this slice of British Columbia remains.

Looks can be deceiving. There are assaults underway in this region, more global than local. In the past few years multi-armed sunflower stars, seemingly once as plentiful as the plumose anemones, have suffered an alarming, fatal infection known as wasting disease.

Anecdotal evidence suggests that climate-change may well be a stressor to the sunflower stars, making them much more susceptible to this affliction, The Pacific Ocean off the west coast of the USA and Canada has seen water temperatures rise in recent years, and certain animals may not adapt well to even minor environmental changes.

We saw few sunflower stars in our four days of diving, and most of those we did see were juveniles.

Had it not been for Jackie’s cautious if not sobering lessons on the subtle fragility of this eco-system, it would have gone unnoticed by a newcomer like me. At least for now, however, and despite the global climate-change ramifications, the eco-system appears to be quite diverse and vibrant.

Soon, the tide is right for slipping back into the chilly water at 7-Tree. Here, Ron gets his schooling rockfish, and I shoot what Jackie later tells me are brooding anemones anchored on the stipes of bull kelp anchored on the top off the reef.

A few days later, at Hussar Point West, another offshore pinnacle, I make an amazing find – brooding anemone colonies at 13m hosting on the bull-kelp stipes in the dense macro algae forest.

I find a crack in the bottom, lock myself in with a few fingers and adjust my buoyancy, careful not to disturb any benthic animals.

I then spend half my dive shooting away in the forest, swaying with the palm tree-like kelp in the rhythmic oceanic swell washing over the reef.

I’m thinking that Jackie would approve of my minimalist impact, working with the surge, not against it, while leaving no footprint. I surface content, with a warm sense of accomplishment.

Back on board, Bill tells us excitedly that a humpback whale cruised by in the channel while we were on the bottom.

Ron looks at me with a smile and says: “Wow, all we need now is a GPO!”

“You didn’t see it?” one of the other diver’s exclaims.

“The GPO. A big one, on the bottom, with all its arms tucked in,” the diver says. “We shot some video – I was sure that everyone had had a chance to see it.”

Sometimes things like this are providential. At least, that’s the way I like to think about missing an encounter such as the schooling rockfish or the GPO.

It means that Ron and I have unfinished business at God’s Pocket. Important business that necessitates a return trip. And Jackie is cool with that.

“There is a long waiting-list for repeat guests on my hosted trips,” she tells us. “But you guys are genuinely passionate about your photography and fun guys to dive with. You’ve earned spots high up on my invitation list.”

Thank you Jackie, we accept!

GETTING THERE> Fly to Hurghada from London Gatwick – embarkation is from Port Ghalib.

DIVING & ACCOMMODATION: > God’s Pocket Dive Resort offers three boat-dives daily and evening/night-dives off its dock in the bay at the resort, and full-board that includes everything but alcohol (buyable in Port Hardy). Nitrox is available for an extra fee, godspocket.com

WHEN TO GO> March through October.

MONEY> Canadian dollar. US dollars are accepted but you lose on the exchange rate so credit cards are preferable.

PRICES> Return flights from the UK start at around £800. Weekly car-hire costs around £200. Four days’ diving with full-board costs around £1600.