In the Glassy Ripples

IN THE GLASSY RIPPLES

Tonga is a place of myths and traditions, and until 1978 whales were welcomed there only as food. Now things have taken a very different turn, as JENNY STOCK, only slightly hampered by her wetsuit, relates 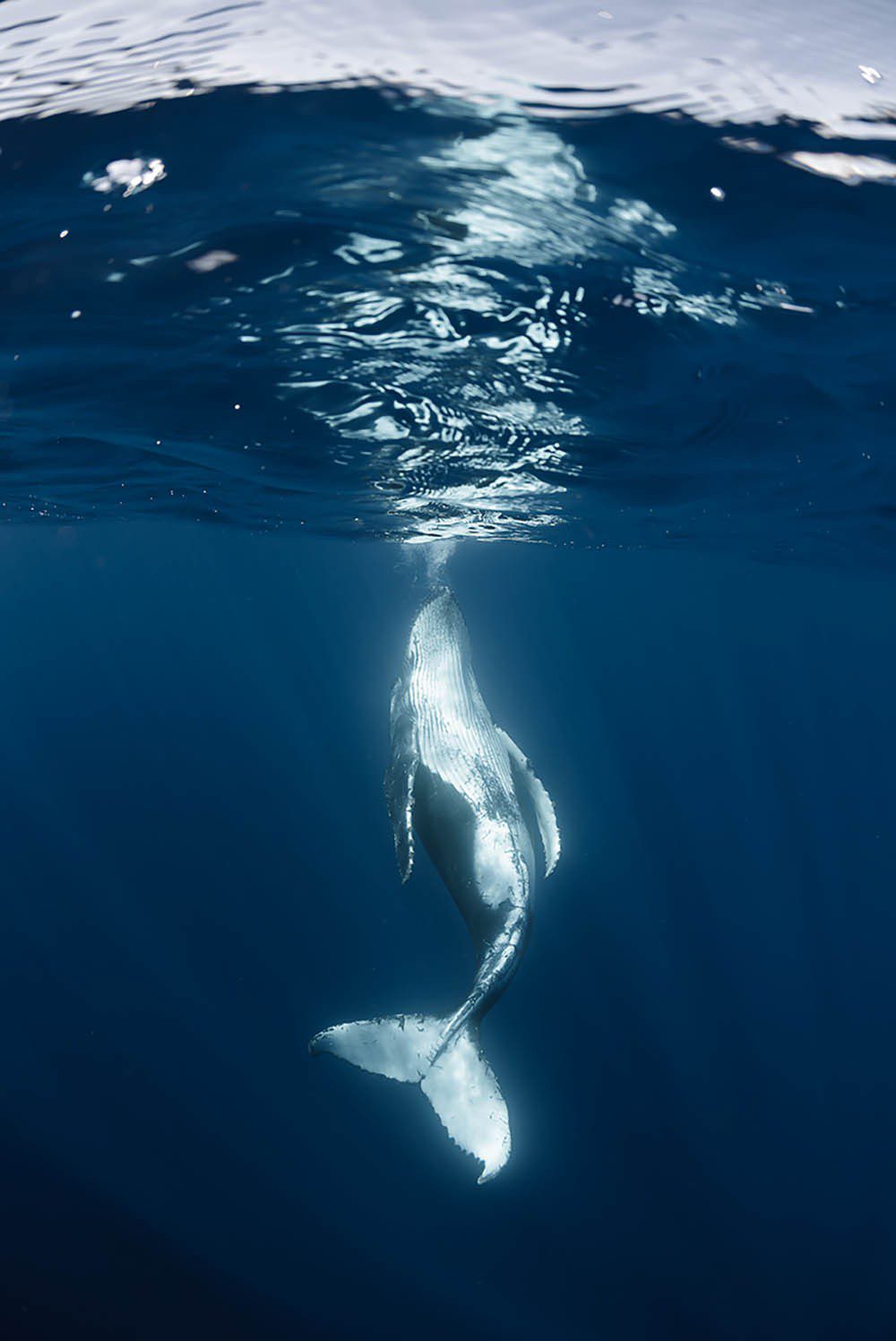 HUMPBACK WHALES HAVE long been pursued by humans, but the motives for this hunting have changed significantly. Once sought for food, fuel and raw materials, the whale is now more often a target for inquisitive tourists than a deadly harpoon. For us aquatic animal-lovers, the whale is a creature to be revered.

In February 1805 the 400-ton sailing vessel Port-au-Prince cast off from the UK with the primary intention of attacking and capturing enemy ships, specifically those of the Spanish and the French. Armed to the teeth, the ship carried the “letter of marque” that permitted privateering, a legalised form of piracy.
Should Port-au-Prince fail to meet and plunder any ships, its secondary objective was to hunt whales for valuable oil. The youngest of the crew was a 14-year-old ship’s clerk named William Mariner.

After two years of fighting, Port-au-Prince mistakenly ended up in Tonga, with a juicy booty of weaponry and gold ore on board. Aching from her adventures and leaking somewhat, she anchored up close to the shores of Lefooga (Lifuka).

TONGAN CHIEF FINAU appeared to be welcoming at first. Hailing the ship with an offer of barbecued hogs, it seemed that Finau was living up to Captain James Cook’s description of the Tongans and Tonga as the Friendly Islands.

The next day, however, Captain Brown was beaten and left to die naked on the sand. Finau’s tribe then murdered all but a handful of the sailors and stripped the boat of weapons, believing it would make his the strongest Tongan tribe.

Legend tells that much of the bounty went down with the ship, and that gold, silver, candlesticks, crucifixes and chalices supposedly still lie on the seabed.

One of the few survivors was young William Mariner, who was spared because Chief Finau had taken a shine to him. He was kept on Vava’u for four years and adopted the name Toki Ukamea (Iron Axe) before being “rescued” and taken back to the UK. Presumably he’d had enough adventures by then, because he became an accountant.

I received a more genuine welcome to the Tongan island of Vava’u last October than Finau had offered; perhaps because I had no intention of killing whales, and the only capturing I would be doing was of images on my camera. 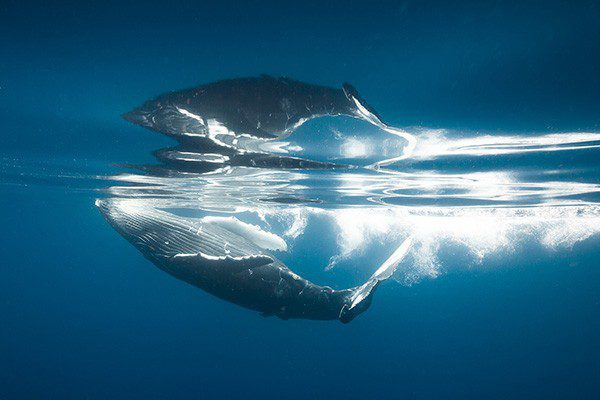 In the glassy ripples – the strange inversion effect.

The season starts in July, when the heavily pregnant female humpbacks arrive to give birth. They stay in the warmwater nursery in Tonga until the calves are big enough to make the trip to Antarctica. Whale gestation is 11 months, so the location is also the mating ground for the next season’s calves.

Early in the season, it’s possible to see the heat runs, where male humpbacks chase the females at full pelt while singing at volume level 11.

My first interaction with the humpbacks set the bar for the week. After seeing a breaching whale from a distance we powered closer in the hope that it would settle. Luckily it did, and our group slipped into the water.

A maximum of four people and a guide are allowed to snorkel with the huge beasts at any one time. I approached the jaw-droppingly magnificent physique of a relaxed mother, and the closer I got the more discernible she became, until I could make out individual barnacles on her nose.

Within minutes of our arrival her playful baby came into view and began looping around us. This overly amorous calf seemed to be curious. Our guide Sione began rolling in the water and, incredibly, the calf mimicked this behaviour straight back.

Sione explained that this was an older calf, one that had grown more accustomed to people. This is one advantage of arriving later in the season – chilled-out whales.

Photographically, my favourite moment would come with my final whale encounter. I had captured some striking images but didn’t feel I had a unique shot yet. Currently I have an obsession with reflection shots, so when the sea surface settled to a flat calm I excitedly kitted up and perched on the side of the boat, clutching my 5D tightly and expecting this to be my opportunity.

At this instant the smooth, almost milky ocean surface became mirror-like. All I needed now was a whale.

LUCJ HAS ITS PART to play in wildlife photography, and at this moment the Tangaloa, or Tongan gods, smiled down on me, as a whale announced its presence with a flap of its powerful tail.

Knowing that my opportunity could be fleeting, I threw myself into the water and kicked as hard as my legs would allow, shortening the distance between the humpback and me and my camera. 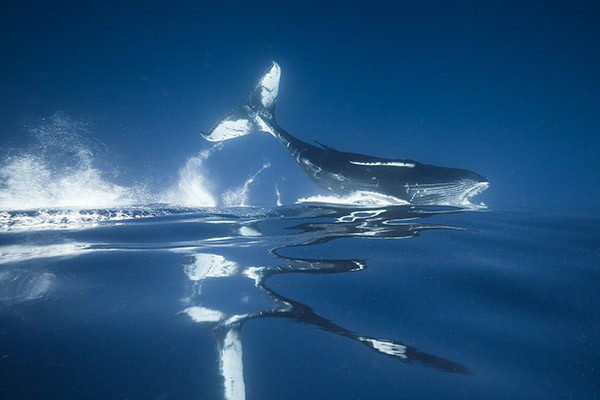 Whale of a mirror!

I had a battle on my hands. My fear of the cold means that I wear a 7mm wetsuit even in the hottest of climes. Those extra delicious millimetres of insulation unfortunately result in a rather overly buoyant me, and it can be a fight to get through the water (I know, I need to toughen up).

Regardless, I managed to get close enough to enjoy the glorious sight of both the whale and its reflection. The humpback and its mirror image combined is a gargantuan and glorious vista, truly a moving moment for me.

I rapidly fired off a few shots, but the experience was all too brief.

I wanted to enjoy the moment for longer, but the whale had other plans and, with a wave of a pectoral fin, it was gone…

Back on the boat, triumphant from my hunt, I reviewed my captures. My favourite depicts an arching humpback whale crashing down through the surface while being reflected serenely in the glassy ripples. This image is even more striking when displayed upside-down!

If that encounter sounds appealing, you too might want to meet the giants under water. How about while scuba-diving?

This isn’t possible everywhere in the world, but it is legal to dive with humpback whales in Tonga. However, you’ll find that locating the whales is a game of cat and mouse, and because the process of kitting-up with tanks slows down your entry, there are fewer chances of close-up interactions. It is also believed that bubbles disturb some whales, so they tend to keep a safe distance.

Liveaboards also operate in the area, and if I returned I would combine the diving and the snorkelling with praying to the Tangaloa for more of their generosity. But sticking to the snorkel I saw each day, on average, three mothers with their calves.

On slow days we would return via Mariner’s Cave, located on a tiny island half an hour from Vava’u. Yes, the Tongans named this cave after the ship’s clerk, and later accountant, William.

Here you needed to freedive 3m down and 2m forward to penetrate the cave (not so easy if you’re wearing your trusty 7mm). This would be a fabulous location to take your scuba-gear, and it’s worth the diversion from the whale encounters to view the hundreds of fish that school in the entrance.

These shimmering beauties make for a glistening backdrop to the modelling shots that are often taken at this site.

Flying from the main island of Tongatapu to the small island of Vava’u kept me off the main tourist trail, which suited me perfectly. But if you do the same, expect to be weighed on a giant set of scales with all your luggage before boarding the tiny plane.

Vava’u was exceptional. I was invited to feasts and enticed to social events in which the locals harmonised around a guitar while supping from huge wash-bowls of kava. This drink is made from ground-down roots of indigenous plants, and is said to have sedative, euphoric and entheogenic properties. It looks and tastes like muddy soup.

Kava is a legal high in Vava’u and I sampled its delights at the weekly gathering in the local police station. It was at this assembly that I asked a local about Mariner’s Cave, and he recalled his version of an ancient Tongan legend.

A Tongan king’s daughter fell in love with a poor man, but the king forbade their love. The couple ran away, dived into Mariner’s Cave and hid on the rocky sides of the internal hidden cavern.

Weeks later a fisherman saw the poor man diving in and out of the cave, collecting provisions for his beloved. On being informed, the king demanded that the couple be pulled out of the cave and brought to him. He had them beheaded for their disobedience – more bloodshed in Tonga, then.

AFTER A WEEK made memorable by beautiful whale interactions, I took my final ride to the airport. I chatted to my 53-year-old taxi-driver about Tonga and its relationship with the humpbacks.

He told me that before the hunting ban introduced in 1978, any whale catch would be divided up among the community. The meat would last people several months.

During the 1970s the government invested in the new technology of an industrial-size fridge. Tongans would buy a portion of whale, bag it, name it and put it in the huge chest.

Folk would come back to town to collect their meat bag when they were ready to feed their family.
I asked the driver what whale tasted like. He replied that it was more delicious than steak, with a fantastic texture. He then started salivating and swallowing and, laughing, begged me to change the subject: “You’re making me hungry – I miss it so much!” he wailed.

He described how in 2002 a container ship accidentally hit a humpback. The dead whale was brought to shore, where it was promptly divided between the locals. By the time government officials arrived, there wasn’t a morsel left, just people on the beach saying: “Whale? What whale?”

It doesn’t matter how good humpbacks might taste – having looked one straight in the eye, I never want to eat one!

I would love to swim with them again, however.

GETTING THERE: Jenny flew from London Heathrow via New Zealand, as international flights to Tonga depart from Auckland (or Sydney). She flew on to Nuku’alofa on the main island of Tongatapu, then with Real Tonga Airlines to Vava’u. Note that RTA has a 20kg hold-baggage limit with 5kg for carry-on, and it may not always be possible to fly with excess.

WHEN TO GO: Whales in the Wild operates from July to October and is already booked well ahead, whalesinthewild.com

PRICES: Return fares from UK to Auckland from £750, onward from £220. Whales in the Wild organises packages from Auckland from NZ $1900 (around £1070) including flights, seven days’ twin-share accommodation and snorkelling.