US dive-teams are working around the world to find the remains of armed forces personnel missing in action from past conflicts, and the process can bring significant wrecks into focus – none more so than a WW2 B-24 Liberator in Croatia. GEMMA SMITH was part of the team. Photos: Brett Seymour, NPS/DPAA 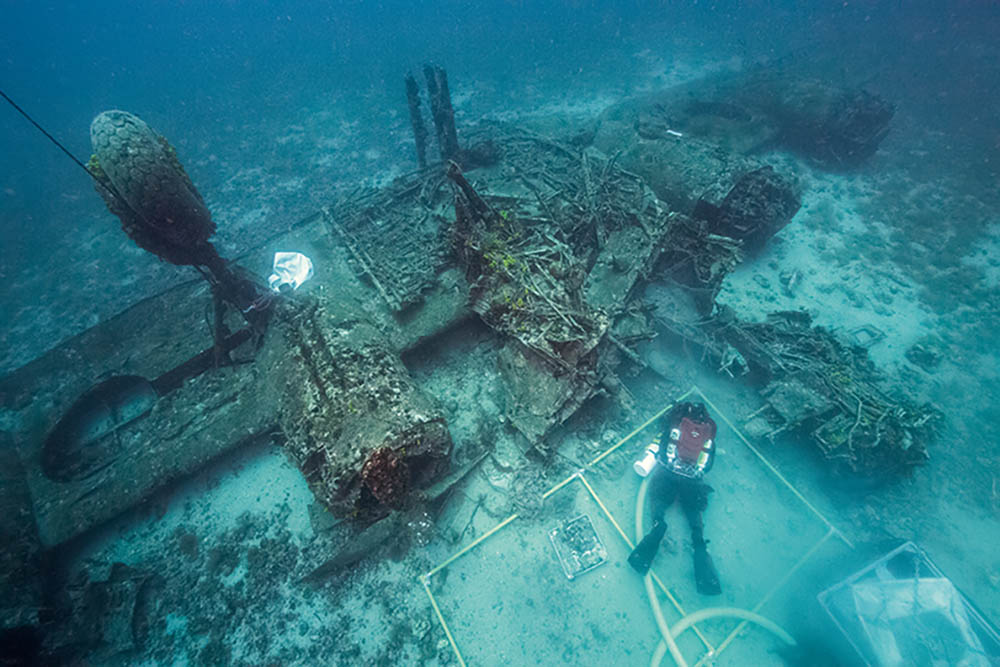 The dive-team works on the wreckage of the B-24 bomber, still only too recognisably a large bomber.

ONE LATE AFTERNOON in March 2017 in Boco Raton, South Florida, I stand in the blazing sunshine and wait. The temperature even in the shade is hot and uncomfortably humid. Despite this, I am busily putting on extra layers to keep me warm.

It doesn’t matter how uncomfortable it makes me right now – in a few minutes when I’m several thousand feet in the air in an unpressurised, cold and draughty B-24 bomber, I know I’ll be glad of it.

Although I’m looking forward to the opportunity to fly in Witchcraft, the only remaining airworthy B-24 in the world, this trip isn’t about just having fun. It’s all about learning the ins and outs of this type of plane for the most meaningful and sobering underwater archaeological job of my career, coming up later in the year off the small island of Vis, in Croatia.

Understanding the layout of this bomber, and where to find things, is going to prove important to our team.

During World War Two, the USA produced only three long-range, four-engined, heavy-duty bombers in any real numbers: the B-17, B-24 and B-29.

Much has been said about the most famous of these, the sleek and elegant B-17 “Flying Fortress” and, later, the B-29 “Super Fortress”. However, the ugly duckling of the group, the B-24 “Liberator”, is nowadays too often overlooked for its more glamorous-looking brothers, despite the innovation of its design and the part it played in helping to win the war.

Our project is going to focus on the wreckage of one particular B-24, now lying at a depth of 37-60m in the Adriatic Sea – the Tulsamerican. This was the last B-24 to be built by the Douglas Plant of Tulsa, a joint project financed by the Tulsa community, the people of Oklahoma, and factory workers. It became a community icon, and remains so to this day.

It flew many successful missions in the war until the fateful day of 17 December, 1944. Having survived a vicious dogfight with the Luftwaffe, the badly damaged Tulsamerican was attempting to limp back to the Allied airfield on Vis for repairs when it crashed into the sea.

The speed and angle with which it hit the water caused the fuselage to rip in half, the aft section eventually sinking into deeper water at around 60m.

Of the 10 men on board, three of the crew were unable to get out of the plane in time. One is believed to have drifted away while still on the surface, but the pilot and the navigator are thought to remain within the wreckage to this day.

Our team wants either to return these men home, or definitively prove that they are no longer there. One way or another, we want to bring closure to their families.

WE ARRIVE IN THE Croatian city of Split in mid-June to meet the rest of our team. Most are familiar faces, with whom we have worked over the past few years on the Antikythera project in Greece, but there are some newcomers.

This is a project carried out primarily with the DPAA (Defence Prisoner Of War / Missing In Action Accounting Agency), a US government agency formed in 2015 from within the US Department of Defence. Its sole mission is to recover military personnel listed as missing, from all past wars and conflicts all over the world, so we also have representatives of that organisation along on this project.

We all feel it’s important for the crewmen to be returned to their families, and are united by our common goal.

Project life is never without its complications, and this one is also a massive collaboration between many different organisations, including not only the DPAA but Lund University of Sweden, Woods Hole Oceanographic Institute, the US National Parks Service and the Croatian Navy.

We have multiple-PhD archaeologists on our team, professional divers, under-water photographers and videographers and an underwater rigging team, as well as a dry-land film-crew, who will join us later for a documentary they are making for NOVA TV about our mission.

Our first job once we reach Vis is to move all our gear, including rebreathers, stages, compressors, pumps, dredges, scooters, survey grids, rigging gear, specialist bone-detection devices and much more, to the large Navy vessel on which we are based.

On the first night of our stay I get a wasp-sting on my eyelid, and spend the next couple days with an eye swollen to the size of a tennis ball. These things happen on expeditions, and it’s just one aspect of being in a remote place with basic living conditions. Either you accept it or you find a different career!

Wearing an eyepatch and looking like a pirate for a few days is insignificant in relation to what we’re trying to achieve.

OUR RECONNAISSANCE DIVE on this wreck is worth every bit of effort the team has put into the project. We have all spent so many months researching the history, schematics and layout of this plane that to see it in the flesh is surreal.

I descend the shotline with Brendan Foley, lead man behind the project, and we see the wreckage of the Tulsamerican appear beneath us for the first time. Despite seeing numerous photos and video footage, I’m still surprised by how relatively intact it is.

The Tulsamerican in flight during WW2.

The aircraft was turned upside down by the impact of the crash, sustaining serious damage, but it is still obviously a plane, and not just a heap of unidentifiable broken metal.

The four radial engines are very broken up, but stand up proudly from the seabed, one with the propellers still attached.

The wings reach out eagerly to each side, and poking from beneath some twisted metal are the flimsy remains of the parachutes that were never deployed.

Dipping our heads under the wings, we see two huge oxygen cylinders that were used for supplying a breathable gas to the crew when at high altitudes.

Ammunition litters the seabed, and the control wheels of the pilot and co-pilot can be seen thrown brutally to one side, where the cockpit was ripped off at a 90° angle. The Tulsamerican will never fly again, but despite the damage it remains something to be admired.

The first week of the excavation goes smoothly. Long days consist of multiple dive rotations followed by wet-sieving on the boat of everything dredged from the seafloor. Two- or three-man teams go in shifts to excavate and carefully water-dredge around the plane, where we believe the airmen might still be.

Each working team contains at least one archaeologist and one professional diver to oversee the scientists as they work. It’s a slow process.

The remains we seek could be tiny, and it’s imperative that nothing is missed.

Although no osseous remains are immediately obvious, we do slowly begin to unearth personal equipment. The co-pilot’s oxygen mask is uncovered for the first time in more than 70 years, and the next day we find the pilot’s headphones, buried in the sediment surrounding the mangled cockpit.

Although this plane was discovered and identified only within the past decade, it is now dived fairly regularly by recreational divers, who have unfortunately begun to slowly strip away the plane. All we hope is that what we seek is deep enough beneath the sediment to remain undisturbed.

After our first week of perfect weather, the wind changes direction and denies us access to our site for eight days. It’s a frustration that all divers have experienced at one time or another, but it never gets any easier.

Everyone is keen and motivated to work, but all we can do is watch the waves crashing and the wind howling, and wait it out.

Three of the dive-team do get the chance during this time to dive on another aircraft wreck, a B-17 lying at 72m, which the DPAA believes might also contain remains of a crew-member.

We carry out only one reconnaissance dive, but this is without doubt the most incredible plane wreck I’ve ever seen. It is almost totally intact, down to propellers still being attached to all four engines. It looks ready to take off from the seabed and start flying again at any moment.

FINALLY THE WEATHER BREAKS, and we’re able to get back to the job. With only 10 diving days left at the site, we’re eager to finish what we started.

Although we’re keen to disturb the site as little as possible, after further discussions with the archaeologists, DPAA members and the Croatian Ministry of Culture, it’s decided to remove the parachutes from the site. Despite our best efforts, we have been unable to dredge successfully beneath them, and can’t take the risk of closing the site without fully exploring the possibility that remains may be hidden there. 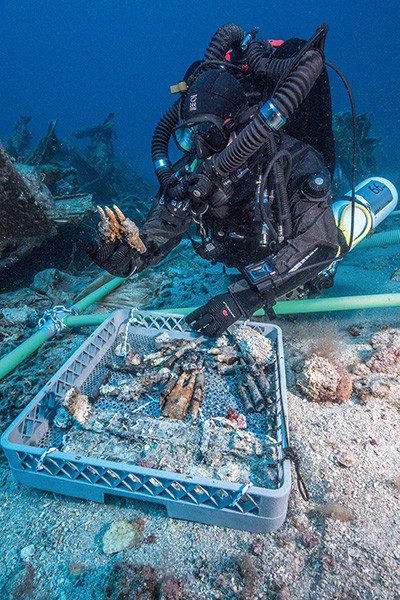 Team one is tasked with the removal job, and by the time Brendan and I drop down as team two to start excavations, it’s clear that we have found our area.

I wish I was eloquent enough to put into words the thoughts and feelings of seeing something lying in the hollow of silt where the parachute had been, and realising that it is possible human remains. This could be someone’s brother, husband, father, son, and we are finally going to allow them to go home to their families. It’s an indescribable feeling, and one I don’t think I will ever forget.

Over the next few days we continue to find further possible osseous remains, as well as the “Mae West” life-jacket that the men would have been wearing in the event of ditching in the sea.

It is an emotional experience for the whole team, and we are all affected in different ways. The overriding feeling is one of duty to these men, and the commitment to ensure that they are treated as respectfully as possible now that they have been found. That night we buy a bottle of whiskey and toast these fallen airmen, who paid the ultimate sacrifice in the war.

As the diving draws to a close and we demobilise and start the journey to our next project, my part in this story comes to an end. From here, all possible osseous remains and personal items are sent to laboratories in the States for DNA testing and analysis.

Results may take weeks, months or even years, but it is hoped that all remains can be conclusively linked to individuals. Easier said than done – often there is no genetic data on file for lost men of WW2, and scientists have to rely on descendants coming forward to get a DNA match.

Sometimes people ask: “Why put so much effort into searching for these long-gone men?” The answer is simple: leave no American soldier behind. The DPAA’s motto of “You are not forgotten” still holds true. I’m proud that I was able to play a small part in helping to bring some of these men home.