Thresher sharks are a treasured sight for divers, all the more so as their numbers worldwide have fallen, and are often associated with the Philippines. JAMIE WATTS looks further into this literally stunning shark, with photography by MALCOLM NOBBS 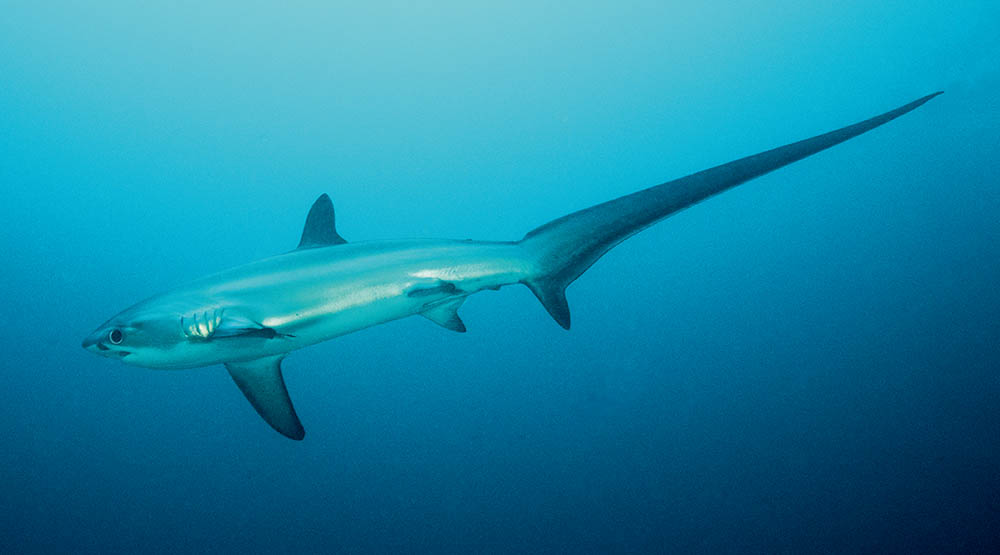 Malcolm Nobbs’ images on this page are of pelagic thresher sharks (Alopias pelagicus).

AFTER AN UNCIVILISED early start, Malcolm found himself in the dawn twilight at 30m, atop an uninspiring rubble reef shoal. But the hour, the surroundings and the early light didn’t temper an excitement that had been building for years;

“I’ll never forget my first sighting of a thresher shark,” he says. “I was both thrilled and stunned. With its disproportionately large eyes and huge, slender scythe-like tail, half the length of its body, its appearance is unlike that of any other shark. I’ve been privileged to see and photograph many sharks, but this species is particularly special.”

The three species of threshers (although recent DNA studies suggest that there might be a fourth) are all rather large, partly warm-blooded sharks, most closely akin to the great white and its cousins.

If you ignore the length of that enormous, elegant tapering tail, threshers are similar in size and build to the larger and bulkier requiem sharks – maybe most similar to an oceanic whitetip or silky – or to the threshers’ slightly closer cousins the makos and porbeagles.

The smallest species, the pelagic thresher found at Monad Shoal in the Philippines and right through the warm Indo-Pacific, matures at about the same size and bulk as a human, at about 12 years old. A large adult female might be 2m long to the fork in her tail and weigh 100kg, and with the long upper tail more than 3.5m in total.

The basic body is that of the stocky, muscular, active pelagic shark, but then attached is that gorgeous, bizarre tail.

Basically the oversized top lobe of the tail, just shy of the same length of the entire body again, has become a giant whip. The shark uses it to stun its prey.

In recent years threshers have been observed a few times hunting under water, and have been seen flicking their tail both over the top of their heads and around to the side into shoals of small fish, stunning them.

The tail flows behind the animal like a ribbon as it swims relaxed, but snaps with incredible force when used in hunting. Orcas use their rather different tails to stun herring in a similar way. If you can stun your prey rather than chase it down, you don’t need quite such a mouthful of teeth as other similarly sized hunters.
The small down-turned mouth combined with the huge eyes – threshers hunt rather deep in dark waters – gives a somewhat comical, cartoonish startled and scared look to these sharks.

They are all rather small-toothed for such large sharks, and their prey consists mainly of moderately small fish.

The pelagic threshers Malcolm saw in the Philippines have large eyes, the temperate common thresher smaller, more normal-sized eyes and the bigeye thresher very odd, giant eyes that wrap around to the top of its head, enabling it to look upwards at depth for prey silhouetted against the dim light flittering down.
The pelagic thresher that visits Monad Shoal off Malapascua Island seems to live a similar life to its closest cousin, the better studied, slightly larger bigeye thresher found in warm seas worldwide.

Both prefer tropical seas, reaching into warm temperate areas as large adults, when their body size retains heat, and their partial warm-bloodedness allows them to tolerate slightly cooler seas, where food is more plentiful. Pelagic threshers live in the tropical Indo-Pacific.

Threshers stay in warm shallow water at night, straying occasionally into diving depths, then dive deeper, far beyond the range of divers, to hunt during the day in colder, richer waters.

Bigeyes have been known to dive more than 700m deep, into water at just 5- 6°C, though 250m and 10° is more normal. Pelagic threshers seem to live their lives a little shallower, and a little warmer.

THE TWO (OR THREE) SPECIES of tropical threshers have a heat-retention system, warming in particular the blood supply to their large eyes and brain, albeit not nearly as well-developed a warming system as makos and coolwater giant tuna have for their swimming muscles. The blood warming to eyes and brain is also found in bigeye tuna, another tropical hunter dipping into richer, deeper water for prey.

Threshers normally cruise slowly, like most other large sharks, at around 1-2 knots, certainly much more slowly than their more active and powerful mako and great white cousins. 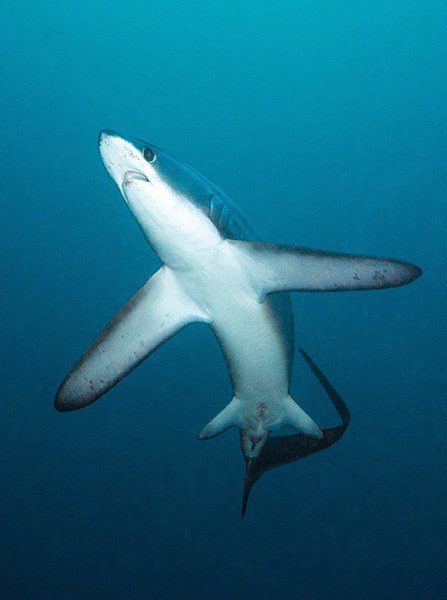 They are constantly on the move, however, and tropical threshers can still cover huge distances; they are known to migrate thousands of kilometres.

The biggest of the threshers, the stocky, smaller-eyed common thresher, spreads into cooler, richer temperate waters. It grows and matures a little faster, and has a better developed counter-current blood-warming system for its core swimming muscles than its smaller cousins, very much like that in makos, porbeagles and great whites.

This partial warm-bloodedness is what allows this species to remain active in cooler seas, where the sharks forage over the edges of continental shelves.

Like other cool-tolerant sharks such as blues and makos, common threshers drift with the warmth and productivity of the waters in their local summer season. Access to these richer seas allows common threshers the luxury of not having to range as widely as their tropical cousins to get their food.

A very big common thresher these days would be a 3m, 200kg shark – 5.5m long with the tail. A few decades ago fishermen were bringing in much bigger sharks, but average and maximum sizes have dropped since then, reflecting the fisheries-driven decline in populations of large sharks all over the world.

Intriguingly, however, the biggest thresher ever caught, a monster massively larger than any other ever measured, at 9.75m to the tip of its tail and weighing 567kg, was caught in a trawl as recently as 2007.

A few areas around the world seem to be hotspot areas for threshers, although few of them bring these sharks into contact with divers.

THERE ARE AREAS OF concentration, perhaps breeding and nursery areas, off Cuba, the Atlantic coasts of Spain and Portugal, the Maldives, some of the central Pacific seamounts east of the Marianas Trench, and the edge of the shelf off north-western Australia.

Monad Shoal is one of a handful of areas in which divers can regularly encounter threshers, as they come in to be cleaned at dawn before heading deeper. 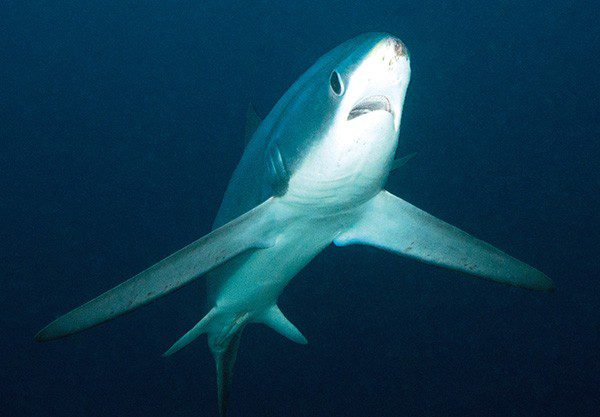 riends working off Bali’s Nusa Penida report occasional encounters, as do friends diving in some areas of the Red Sea off central and southern Egypt.

Like all the big pelagic sharks, thresher numbers worldwide dropped in the 1980s and particularly the ’90s with the rise of shark-finning. That tail naturally provides a lot of fin.

It’s difficult to appreciate how much of a change this has made to thresher populations, partly because of patchy and incomplete fisheries records, but some stocks have certainly almost collapsed completely. Mediterranean thresher catches have declined by more than 95% in the past century.

Threshers were probably always less abundant than blues or oceanic whitetips, but probably a little more abundant than the more energetic makos. They seem to reproduce relatively well, often away from where there are concentrations of people.

Best estimates are that threshers make up 10-15% of pelagic shark catches, so original populations worldwide were once probably in the low millions. It’s difficult to clearly estimate now, but I’d hazard a very rough guess that tens to hundreds of thousands of threshers remain, spread far and wide.