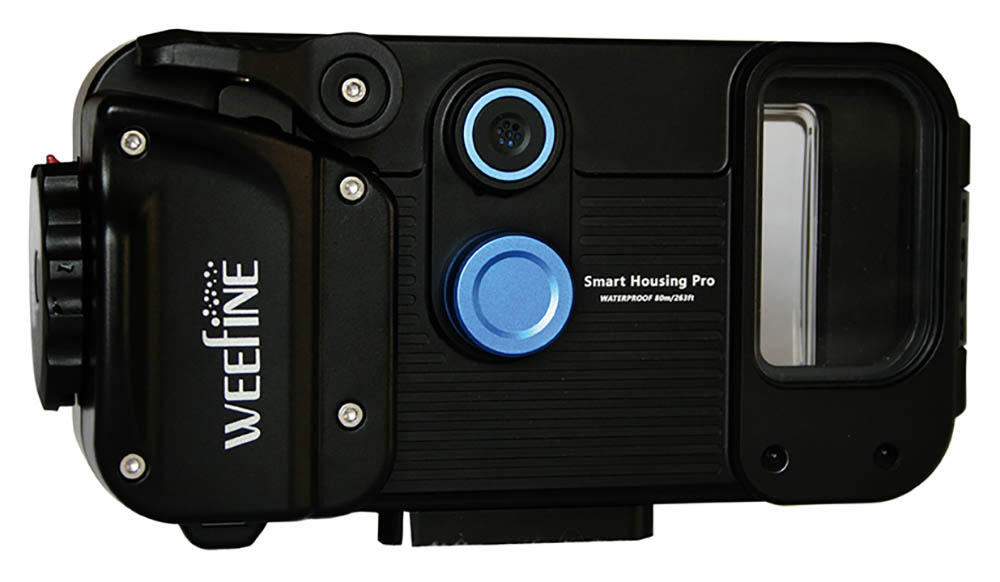 TEN YEARS AGO, the compact-camera marketplace was booming. New models were being announced pretty much every week, and sooner or later an underwater housing became available for nearly all of them.

Today, the segment is more like the end of the party, when the lights go on and the few remaining guests stand around blinking and shuffling their feet and looking embarrassed

as they search for their coats to go home.

And why? Well, pretty much everybody has a smartphone with a camera these days, and it’s always in your pocket when you want to snap a picture, so what’s the point of carrying a dedicated camera when you have such a wonderful multi-purpose device?

Which brings us to the Weefine Smart Housing for smartphones. Let’s make one thing clear from the start – this is a proper housing for proper underwater photographers.

The only real question is whether the picture-quality of your phone camera is up to the job. Topside, it does seem to be for most of us for most of the time, otherwise we’d all still be buying cameras.

Now that’s sorted out, the housing comes in a high-quality black zippered case roughly the same size and weight as a house-brick, and when you unzip  it and take out the housing you’ll understand why. Made of a combination of metal and heavy-grade acrylics, the Weefine stands comparison for build quality with any housing on the market. 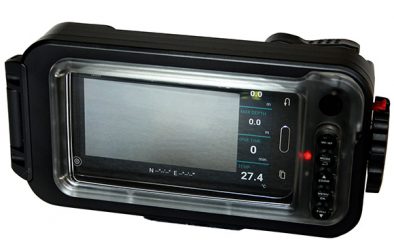 The rear of the housing with phone showing standard viewing display. The red light indicates that there is no vacuum seal.

Also in the case is a suspiciously medical-looking device – about which more later – a wrist lanyard, two spare O-rings, an O-ring picker and an instruction sheet. The instruction sheet could have been more helpful, but let’s not be too critical.

I dislike using phone cameras, because they’re an ergonomic disaster and just not natural to hold. I’ll admit that they’re convenient, but given a choice I’m one of those people who still prefer a proper camera.

Stick the phone in the Weefine housing, however, and the handling is transformed. There’s a chunky hand-grip on the front right for your fingers, a neat little pad top right of the rear for your thumb, and your forefinger naturally rests on a proper shutter-release.

It all feels just like holding an actual camera, albeit on the large side, and it’s marvellous.

The front of the housing is dominated by a large window at the right-hand end as you look at it from the front. It’s large because Weefine says you can use any smartphone in the housing, and different phones have the camera lens in different places.

If your phone has a flash setting, you’ll also be able to set up a fibre-optic connection to an off-camera strobe using the window.

You’ll note the big blue knurled knob, too, also to be referred to later on.

Round the back, pretty much everything is window. You’ll be using the screen of your phone as the viewfinder and you need to see all of it, so it has to be. There’s a vertical row of five buttons at the right-hand side, however, and these are used to control the camera in the housing.

They fall easily to the thumb if and when you need to press one.

You unlock the housing using the large rotary-action knob on the right side, then open the back door. You’ll need to insert two AAA batteries to power the housing. The compartment is accessible with the back open, then you simply drop the phone in place. 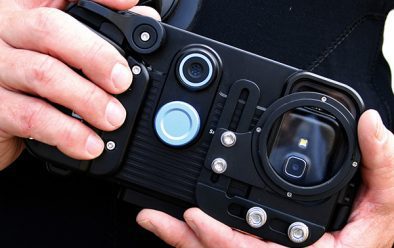 Housing in the hand, showing the accessory-lens mount (left) and with add-on wide-angle lens (right).

There’s a sliding blade towards the bottom right to hold the phone firmly against the left edge of the housing, though nothing to hold it in place vertically.

In the set I was sent there was a block of soft material that would be ideal to cut to make a shim to hold the phone exactly in place.

Not that it matters too much, because when you close and lock the back the phone is sandwiched firmly but gently in place, and doesn’t move.

Back to the blue knob round the front – unscrew it, and you realise that it’s actually a cap, under which is a valve. Take out the medical device, a syringe attached to a rubber tube with a cup at the end, place the cup over the valve and half-a-dozen pumps of the syringe evacuates the air from the housing. Now you know it’s sealed.

A red light around the back changes to green to confirm that you have a good seal and the housing isn’t leaking. With phones costing what they do, that’s nice to know before you drop into the oggin. Not that real ’togs worry about the cost of flooded equipment. If you’re going to let trifles like that concern you, you might as well not bother.

Remember to replace the cap before you dive, and you’ll need to release the vacuum before you can open the housing again, which is done by removing the blue cap and pushing the valve to one side.

Which leaves just two more features to mention: a tripod bush on the bottom to mount your housing to the tray of your choice, and a couple of threaded holes beneath the front window for mounting an adapter, so that you can use wet-mount accessory lenses. 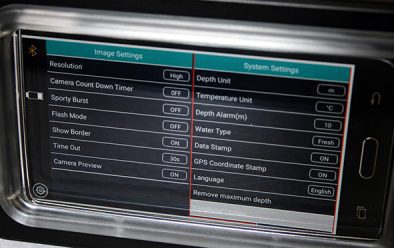 Just because you’re using your phone, the basics of underwater photography don’t change, and a wide-angle lens remains an essential accessory.

You’ll need to adjust the position of the adapter to centre your wet lens over the camera lens, but you should only need to do that once. That’s why I’d like to shim the phone so that it always sits in the same place in the housing.

The mount takes 52mm lenses, and conversion rings will allow you to use the more common 46 and 67mm lenses, as I did.

And then we’re into the realms of the app.

This is the clever bit, and the bit where the instructions could have been a little clearer.

You need to download the Weefine housing app to your phone, make your phone visible to the housing and pair using Bluetooth, then put the phone in the housing.

The housing then controls the phone via Bluetooth and the app, and you have full control of the camera, just as you do with any camera and housing combination.

For example, the most common setting you’ll need to access on dives is colour balance.

Press the bottom button on the right rear of the housing, the one marked Filter, and you get a pop-up allowing you to choose from auto colour balance or red or magenta filters, for blue and green water respectively.

Each filter has five strength settings, so you look at the picture on the rear screen and choose the setting that looks right. Simple.

And there’s more. The housing also monitors your current and maximum depth, dive-time and water temperature, and can stamp your pictures with date and GPS co-ordinates if you want it to. You select the units it uses, and can choose between salt or fresh water, set a maximum depth alarm and more.

In water, the housing is easy to use. The set-up is surprisingly large and remains quite heavy, especially with a wet-mount lens attached, but that’s no bad thing. 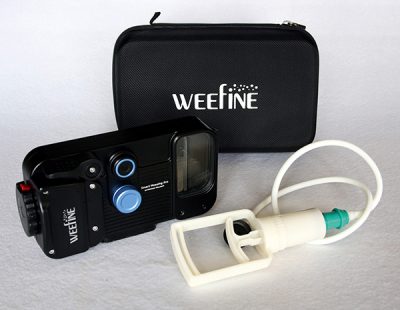 Add a bolt-snap to the lanyard and you can clip it off if you need a rest. The rear buttons are a bit fiddly with thick gloves, but more usable than most compact-camera housings.

Picture-quality will be determined by how well the camera in your phone performs, of course, and Weefine says that  its housing will work with any phone, regardless of operating system, although the UK importer is currently recommending the housing for use with iPhones only.

I tried an iPhone and two different Android phones and found that the iPhone worked nicely, whereas the Androids were a bit temperamental. Expect to see new Android software soon.

Oh, yes, and expect to recharge your phone after every dive, just like you did with your proper camera!

This is an impressively well-made piece of kit, and it does the job for which it’s intended  extremely well.