The waters around the village of Portofino in northern Italy are a fine illustration of what a marine reserve can achieve in a comparatively short time. And as NICK & CAROLINE ROBERTSON-BROWN find, it’s in a great part of the world for a budget diving break 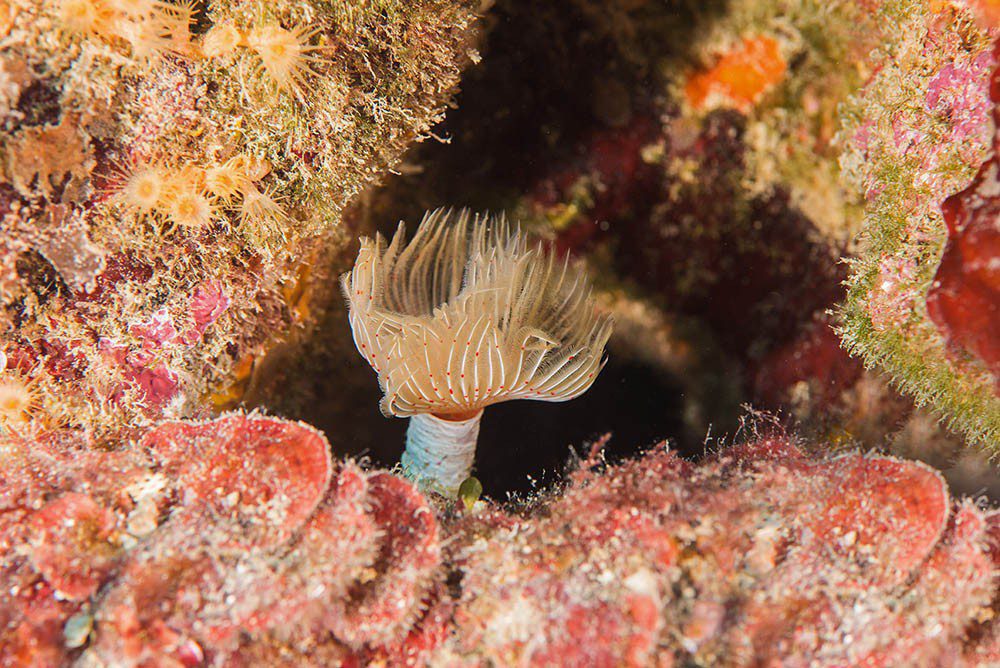 PORTOFINO IS A BEAUTIFUL Italian fishing village on the Ligurian coast, along the Italian Riviera.  Situated in a natural harbour, it has been inhabited for more than 2000 years. In more recent times, it has often been the rich and famous who could be found staying in this idyllic corner of Italy, where the ancient buildings are brightly painted and overlook a protected inlet from the steep cliffs and hills that surround the cove.

The waters around Portofino have been a marine park for 18 years now, and as a result of this conservation effort, the underwater wildlife is prolific. 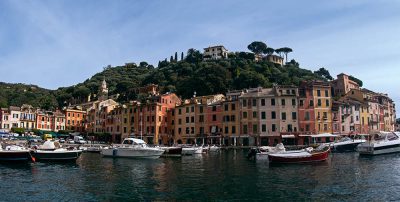 The fishing village of Portofino.

There can be only two or three other places in the Mediterranean that offer the corals, sponges and schools of large fish that you’re likely to find beneath the waters off Portofino.

It’s not just underwater wildlife, either. Within the marine reserve there are 15 shipwrecks to explore, many of them suitable for the recreational diver.

Beyond 40m there are also deeper wrecks for the tekkies, and most of the dive-centres along this stretch of coast have the facilities to cater for all kinds of technical diving.

This is also a place well-known to freedivers, and one of the most popular places to dive for both free- and scuba-divers is the bronze statue of Christ of the Abyss. This underwater monument was erected in 1954 in honour of Dario Gonzatti, who died in 1947 while scuba-diving, and it is supposed to protect all those at sea in the region, particularly divers and fishermen.

To get to Portofino, we took a budget flight from Liverpool to Genoa, but there are various options from the UK, and flying into Pisa is another way to make this short trip.

If you’re feeling adventurous, try taking a road trip down through France.

Shortly before you enter Italy, at Golfe Juan, there is another marine park offering some very reasonable Mediterranean diving.

There is a dive-centre there called Diamond Diving which is run by a British/French couple, and they can help you find accommodation if you fancy this overland drive.

As we had flown into Genoa, we hired a car and drove to Rapallo, which is just two or three miles from Portofino. Rapallo offers a wider choice of places to stay, and it’s probably safe to say that you get more for your money in terms of accommodation than you would in Portofino. Rapallo has a great history of diving and is in fact home to Mares, and where research and production of most of its equipment is carried out.

WE DIVED WITH Abyss Diving Centre, now part of Diving Group Portofino, which was formed by a merger between the three most-established dive-centres in the region. It runs a full range of SSI and PADI courses as well as being a specialist centre for TDI and UTR courses. As a result, nitrox and trimix refills are available, and it also offers rebreather facilities and courses.

Our first dive was to check out the marine life at one of the many sites that all lie within a 15-20-minute boat-ride of Rapallo. All these sites inside the marine park have their own dedicated mooring. All are marked with a small buoy, and only one boat is allowed to tether at any one time.

The sun was shining and the water looked crystalline from the surface. As we descended, following the steep sloping walls that, disappointingly, appeared to be covered in algae, schools of fish came up to greet us.

Then, as we descended further, colours appeared to explode before us.

Gorgonians and anemones of red, yellow and orange enveloped everything on the vertical walls, and once we got our eye in nudibranchs of all colours and sizes and shapes seemed to appear everywhere.

There were large grouper patrolling their turf and large grey morays hiding in crevices while being cleaned by striped shrimp. It was sometimes difficult to focus on the nudibranchs and anemones, as schools of fish swooped from left to right in front of our eyes. All told, it was quite hard to believe that we were diving in the Mediterranean Sea.

Our second dive was on the wreck of the Mohawk Deer, a Canadian cargo ship that was being towed to be scrapped for iron in November 1967.

The weather turned nasty during this operation and, as the storm picked up, she broke free from her towline, hit the rocks and broke in two.

The vessel sank to the seabed and can now be found pointing upwards in 18-50m of water on a steep slope, with both pieces in the same orientation and close together. The bow of the wreck is at the top, with the stern down at 50m.

We stayed for the whole dive in the shallowest section of the wreck, where schools of fish swam in and out of the remaining structures, eels hid in metallic crevices and substantial coral growth decorated the superstructure.

Both of the dives were easy-going, with very little current, and the clarity of the water allowed us to feel comfortable diving in 5mm wetsuits.

BACK UP ON THE BOAT the sun was shining, and we quickly warmed up while chatting to our guides about the dives we had done, and checking the plans for our next day.

Alas, the sunny conditions were about to disappear, the wind was changing and the seas were already starting to pick up. We could feel it getting rougher. We did, however, manage to convince the crew that we should get up early, before the waves and swells became too much, and head out to dive and photograph the famous Christ of the Abyss. 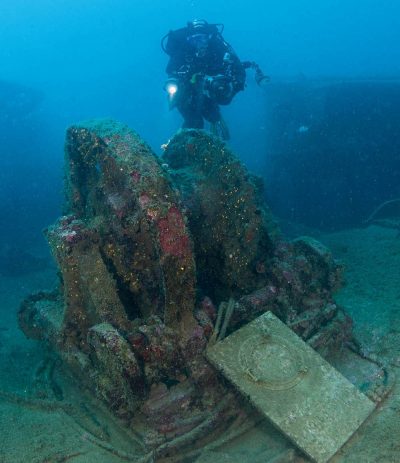 Even in the shallow section of the wreck there is plenty to see.

This is one dive that any diver visiting Portofino has to do. It lies in a sheltered bay, so while the ride around the headland was a little bumpy, preparing for the dive took place off a flat-calm coastline near San Fruttuoso.

The statue stretches up from the seabed at 15-10m deep at its fingertips. Numerous tourists and local people come here to snorkel, because the visibility enables it to be viewed from the surface.

As we had arrived on a working weekday and got to the mooring while most people were still having their breakfast, we had the Christ all to ourselves.

Caroline, inspired by religious depictions of Christ with a halo of light around his head,

set off to position strobes behind the upper part of the statue so that we could recreate this idea under water.

Every now and then a small fish would swim up, as if curious about our activities. It was clearly intending to photo-bomb us, which it succeeded in doing on multiple shots.

All too soon, our boat-crew signalled to us that it was time to ascend. The clouds were coming in and the weather was picking up, which meant that we needed to head back to shore.

In just those three dives in Portofino we encountered spectacular coral reefs, an impressive wreck and the statue of Christ of the Abyss, so a more varied set of dives we could hardly have wished for.

Rapallo, too, is a beautiful town with great views out and across the bay. In the evenings, you can wander around and stop at any of the numerous bars and enotecas to enjoy the local wine (which is really very respectable) or you can drive out into the country where there are great views of the mountains. Only two hours south-east is the beautiful city of Florence.

After diving, we drove the hour or so north-west to a village called Barolo, where we sampled some of the finest wine anywhere in the world.

And the rest of our tour was dedicated to enjoying the wonderful food, company and wine this region has to offer.

GETTING THERE> Nick and Caroline flew with Ryanair from Liverpool to Genoa, then hired a car.

WHEN TO GO> April to October is best.

PRICES> DPG can offer six nights’ B&B at the 3* Hotel Giulio Cesare in Rapallo (two sharing) with eight dives each from 535 euros pp. Budget flights to Genoa cost from £75 return.