‘Warming up’ in Iceland for a trip to the great unknown of Greenland gave MICHAEL SALVAREZZA and CHRISTOPHER P WEAVER a keen sense of anticipation, but the realities of iceberg-diving proved to be a step beyond expectations 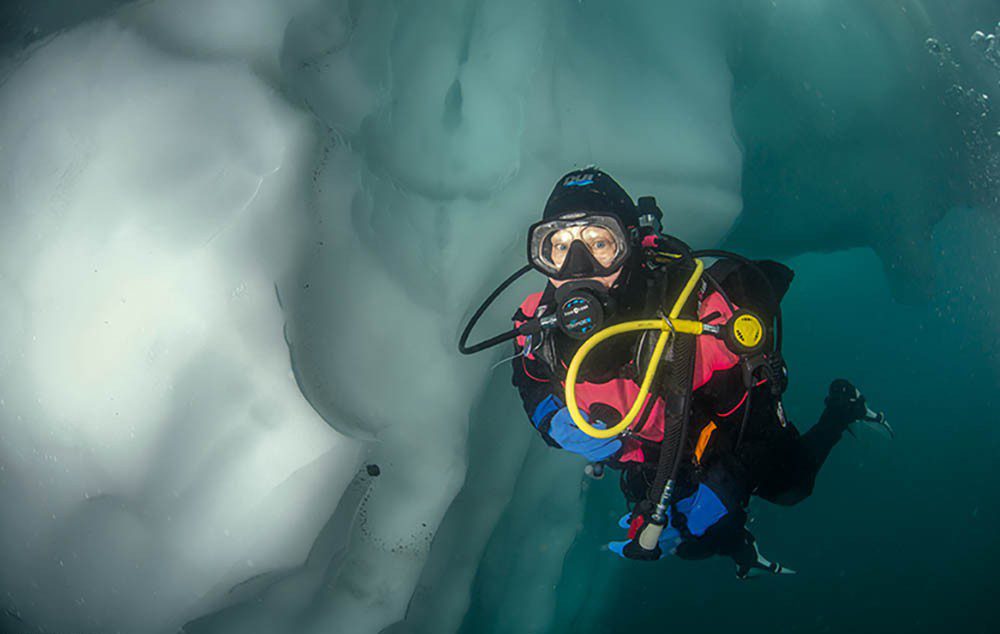 THE EXPEDITION VESSEL mv Plancius was pointed south-east and heading into the Denmark Strait, bound for Akureyri, Iceland. It was time for us to reflect on our expedition north of the Arctic Circle to the rarely visited, and infrequently dived, island of Greenland.

As with all true exploratory expeditions, the outcomes are never certain and we had our share of unmet expectations, but the wonders of the north had captured our hearts and we had departed with a sense of regret. We wanted to stay!

The ship rolled lazily in a gentle swell under a serenely setting sun. This was a big difference from our experience more than a week earlier, as we had set out on our first trip to Greenland.

With the expedition vessel leaving from the north of Iceland, most members of the dive-team had chosen to arrive early and explore the wondrous diving opportunities of that island-nation. 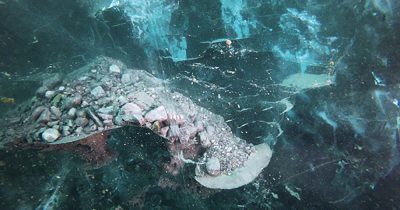 Divers peer through the clear ice of an iceberg to see trapped sediment from eons ago.

With a marvellous initial dive in the iconic Silfra geologic fissure, we were also able to shake out any equipment issues, buoyancy problems and diving rust before proceeding further north.

Iceland has many varied dive opportunities, and over the course of a week we had carried out macro dives along the shores of fjords and experienced the only diveable hydrothermal vents in the world at Strytan.

Visits to hydrothermal rivers and additional geological fissures in the north rounded out an exciting start to the expedition.

Before long we were excitedly boarding our vessel, getting settled into our cabins and casting off for a 24-hour crossing of the Denmark Strait. Our destination was Scorsby Sund, a group of dramatic fjords on Greenland’s east coast.

Leaving the shelter of the Eyjafjordur Fjord in Iceland, the Plancius confronted a 40-knot wind and 4m seas as it punched its way towards the world’s largest island.

Over the course of the next day we became accustomed to being tossed about like a bird in a storm… that is, those who didn’t quietly retire to their cabin and keep a low profile!

We crossed the Arctic Circle early on, and the only witnesses were those on board and the Northern fulmars that seemed oblivious to the weather as they flew an aerial ballet alongside the vessel.

All crossings eventually come to an end. We suited up under a brilliant Arctic sun for what would be something of a check-out dive at a place known as Vikingebugt in the Danmark Fjord.

There was very little marine life to see except for a few brittlestars and small coldwater mussels. The most memorable aspect of this initial plunge was that several members of the team became “bi-polar”, having previously completed dives in the Antarctic.

No official statistics are maintained on this, but DUI, the expedition sponsor, estimates that fewer than 1000 divers are bi-polar in this sense. True or not, this was cause for a small celebration in the ship’s lounge that evening.

After a couple more dives along rocky drop-offs in the fjords of Scorsby Sund, it was time to seek out a diveable iceberg.

Icebergs litter the waterways of these fjords as the glaciers of Greenland push their ice inexorably towards the sea, where they calve off, begin to float in the salt water and eventually melt and vanish.

Diving on icebergs is dangerous if the right one is not selected. Icebergs are inherently unstable, and one that breaks apart or rolls over in the sea while divers are around it means trouble.

We searched for a while in a place known as Jytte Havn until we found a reasonably safe-looking ’berg to dive.

Rolling off the inflatables into the cold water, we were transfixed. Below the waterline is where most of the iceberg exists and the ice formations, smoothed by untold weeks or months in the sea, present an ever-changing palette of other-worldly landscapes.

As we passed divers exploring the iceberg, we could see the smiles literally frozen on their faces!

THIS TYPE OF DIVE presents an unexpected challenge. Divers

properly weighted for salt water will find themselves sinking dramatically as they get close to the ’bergs, because of the fresh water melting off the ice.

Although a real problem, we couldn’t help laughing as we watched divers bob up and down in the water column, alternately adding and flushing air to their BCs. It took some practice before we all got it under control.

One of the icebergs we explored created a buzz with the entire dive-team that lasted for days afterwards. It was early afternoon and the sun was peeking in and out of high clouds as we searched among the multitude of ’bergs in the Rypefjord area, looking for a stable example.

After some time we came across a fairly nondescript iceberg, one that almost had a grubby appearance on the surface, as the jagged ice seemed to have been stained with mixed rocks and soil.

It seemed stable, however, and before long we were splashing into the water alongside this “dirty iceberg”.

The water was murky, and it took a moment to focus our eyes as we searched for the underside of the iceberg.

Slowly at first, and then more abruptly, the spectacular image of its nether regions came into view. We were captivated.

This glacial remnant emerged from the murky water as a crystal palace under water. The ice was as clear as glass everywhere we looked.

The transparent ice gave us views into the inside of the ’berg itself. Trapped deep inside were rocks, silt and dirt, caught in the glacier’s traverse across the Greenland landscape.

There were shelves of glassy ice with piles of rock and stones resting on them, as if they were part of an elaborate table setting. And as the ice slowly melted in the surrounding salt water, waterfalls of silt could be seen cascading down the interior walls of the glass-palace iceberg.

In some places, shards of ice jutted out from the main body. It was both beautiful and spooky to see wavy images of divers on the other sides of these glass walls.

We had never seen anything remotely like this, and were mesmerised by the infinitely beautiful shapes and textures of this Arctic wonder. The divers on this dive could be heard later in the ship’s lounge, regaling others long into the night with descriptions of that iceberg.

As we continued to explore the many fjords of Scorsby Sund, it became apparent that we were not seeing the marine life we had anticipated. Brittlestars, sea-anemones, jellyfish, copepods living on icebergs and small Arctic sculpin fish seemed to be the only forms of life in these waters.

Our pre-expedition fantasies had embraced images of meeting narwhals, seals and Greenland sharks, but our camera memory-cards were filled only with the species listed above.

We remain perplexed; the rocky bottom at each dive-site was often covered with marine algae, seaweeds and kelp, but we saw very few fish and no large marine animals. Is it normally this barren?

For photographers, other than the obvious wide-angle opportunities around the icebergs, most outings are best viewed as macro dives, and a 60mm lens suits these conditions perfectly.

DIVING IN THE polar regions is not easy. The challenge of properly protecting yourself from the frigid temperatures (we recorded temperatures down to zero) necessitates drysuits and all the accompanying undergarments and coldwater gear.

Several divers used heating systems to provide extra warmth to their core, hands and feet. With one or two dives a day, maintaining warmth was the over-arching concern. It’s also important to use environmentally sealed and coldwater-prepared regs to guard against freeflows and other possible malfunctions.

Our dives in Greenland ranged in depth from 8-18m, with visibility varying from 3-9m. The water temperatures were coldest nearest to the icebergs, but were consistently close to freezing.

The rigours of diving in the polar regions extend to getting in and out of the water. Typically, dives are done off inflatables and divers kit up on the boat and back-roll in – the tricky part is getting back in, and the often inelegant manoeuvres of those unused to such exits were the source of endless entertainment.

THE DIVING PROGRAMME completed, we made one final landing before heading home – a brief visit to the Inuit village of Ittoqqortoormiit.

Divers are often blessed with opportunities to encounter other cultures that other tourists don’t get to meet. This brief encounter with Greenland’s Inuit was an example – and a sobering one. 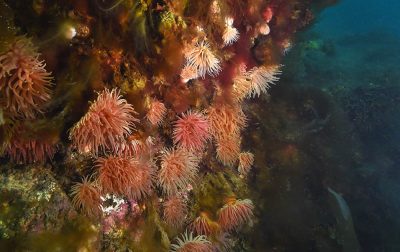 A wall of colourful anemones

From a distance, the settlement appears as a small collection of brilliantly coloured homes and small structures.

But as we prepared for our landing, we learned from an Inuit expert aboard the Plancius of the trials and tribulations of the indigenous people in these regions.

With few employment opportunities, dwindling marine resources and prohibitions from traditional hunts of now endangered animals, the Inuit struggle to eke out an existence and maintain their culture.

Many are on government subsidies and some fall prey to alcoholism as an escape from their problems. It’s a harsh life in an unforgiving environment.

Still, we greatly enjoyed spending time with residents of this village, learning their names and ages and hearing their stories, which they tell with pride.

We’re always struck by how similar we all are, despite our superficial differences – we’re all concerned with shelter, food, employment and providing for our families.

All cultures struggle with the pace of change in the modern world, and the Inuit of Greenland are on the front lines of these struggles.

Our expedition infused a sense of appreciation for the magically desolate environment of this northern region. Greenland’s landscape is dominated by dramatic mountains seemingly thrust from the sea, thundering glaciers and beguiling icebergs.

In the evening, the dark skies overhead are often lit up with the dancing lights of the Aurora Borealis. Greenland is home to polar bears, musk ox, seals, Arctic hares and narwhals – all of which can prove elusive. Our dives didn’t reveal a plethora of marine life, but our explorations of the icebergs captured our hearts.

We wish Greenland well as the Earth’s climate warms and touches the ice that covers this vast island in the Arctic.

Eventually, this ice will melt, revealing untold mysteries. For now, we can only hope for the best and plan our return.

GETTING THERE> Expeditions to Greenland depart from Akureyri, Iceland, so fly from the UK into Keflavik international airport. Icelandair flies regularly from London.

DIVING & ACCOMMODATION> Plancius is an 89m ice-strengthened vessel and can take up to 116 passengers. Owner Oceanwide Expeditions runs several expeditions a year to Greenland, plus itineraries to Antarctica and Svalbard, oceanwide-expeditions.com. Diving in Iceland was arranged through Magma Divers, magmadive.is

WHEN TO GO> Trips to Greenland are typically conducted in the late summer months when the weather is mildest. Diving in Iceland takes place year-round, with the best weather in summer.

PRICES> The two -week expedition was organised by DUI, which runs a number of such trips each year to remote destinations, and cost US $9000, divedui.com