An experiment using green-dyed water established long ago that something strange was happening in Kefalonia – and nothing has changed. MARTYN FARR reports from a unique Greek diving destination. Additional photography by GERASIMOS SOTIROPOLOS 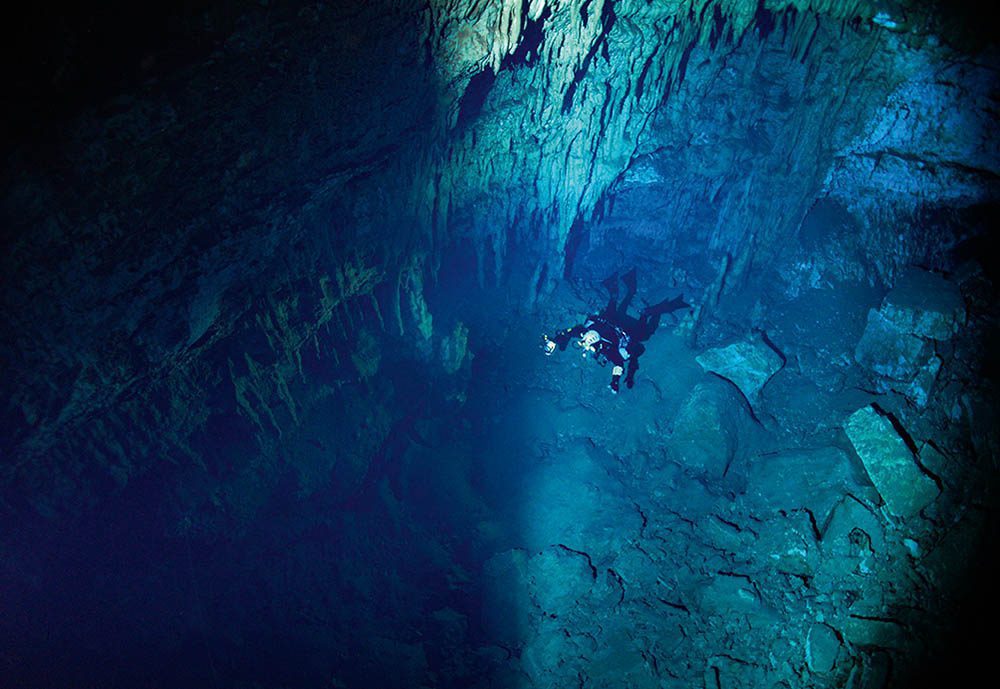 KEFALONIA IS THE LARGEST of the Ionian islands off the western seaboard of Greece, and has long been a popular destination for tourists, especially from northern Europe.

With its balmy Mediterranean climate, clear waters and rich historical background, few would question Kefalonia’s potential as a holiday destination. But apart from its obvious charm and featuring in the 2001 war film Captain Corelli’s Mandolin (starring Nicolas Cage), Kefalonia also presents a unique phenomenon that has intrigued scientists for nearly 200 years.

Here, at a discreet point on a peninsula, the sea flows into the land – and the water eventually reappears on the other side of the island.

I’ve been a cave-diver for 46 years, and had heard of this unusual phenomenon very early on in my diving career. The intriguing situation was recorded at Katavothres, on the headland near the capital Argostoli. As early as 1835 an Englishman called Stevenson documented the disappearing water, and subsequently a small water-wheel was constructed to operate a corn mill.

Scientists naturally took an interest in the unusual water flow, and in 1963 a strong dye was poured into the sink.

This experiment, carried out by Ioannis Petrocheilos and the Austrian hydrogeologists Maurin and Zölt, involved the use of 140kg of uranine, a very intensive green colour.

Amazingly, the green water was to reappear 14 days later near Sami on the eastern side of the island – more than nine miles away. Appearing first at the popular tourist venue Melissani Lake, it finally emerged from the flooded cave of Karavomilos, at a point slightly higher than sea level. 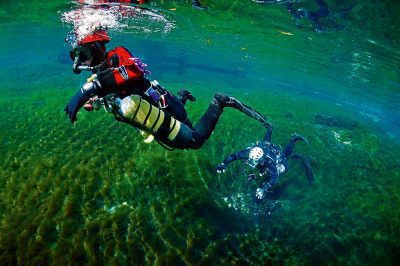 Diving in the lake.

Here again, a water-wheel was constructed. Today the structure is still evident and, while the wheel may no longer turn, it’s fascinating to see the brackish water running in force down the stone-lined channel to the sea a few metres away.

In effect, therefore, the water would appear to run uphill from one side of the island to the other!

Various theories have been formulated to explain this unique situation. While the most likely answer involves the mixing of fresh with sea water, and the complicated physics of water density, to an explorer the reality is that there is one exceptionally long cave system waiting to be uncovered there.

To date, numerous cave entrances have been located but few possess more than a few hundred metres of passages.

I had made a fleeting visit to Kefalonia back in 2003, and had been fortunate at that time to take some photographs in Melissani Lake Cave.

Archaeological discoveries made at this site mean that today dive access there is complicated, with permissions required from a government department in Athens. As such, divers need to be aware that the process is not quick or simple, and if filming or photography is envisaged, access will involve certain expense.

THERE IS LITTLE DOUBT that Melissani Lake Cave is a prime dive-site. At some point in the cave’s distant past, the roof of a large subterranean chamber collapsed, revealing a spectacular water-filled void.

The rock walls of this cavern are everywhere overhanging, so that in the historical period there was no access to the water other than by being lowered on a rope, or using a caving ladder.

But what a beautiful, enchanting place this is when the sun’s rays pierce the depths! The tunnel is large, the water is clear and there must surely be exploratory diving potential both upstream and out towards the sea, 500m away at Karavomilos.

Even if you’re not prepared to embark on the lengthy process of gaining dive-access at this site, a visit to the cave as a normal “tourist” is a must.

Entry today is via an artificial tunnel driven down to the lakeside in 1963.

At this point one is taken on a rowing boat out across the lake and into the enormous cave at the far side. 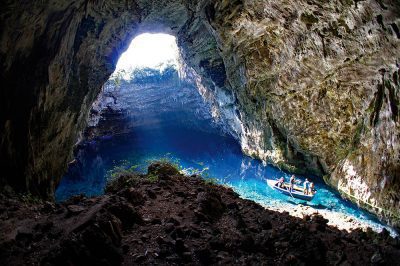 This gives a very good idea of the size of the submerged tunnels in this area. Drogarati Cave, a few kilometres to the east, might be large, well decorated and totally dry, but Melissani will certainly give the best impression of what it’s like under water in the subterranean world of Kefalonia.

As we discovered on our visit last October there are a number of caves further back from the coast than Melissani.

Zervati Cave in the middle of the village of Karavomilos presents a fine cavern-dive and, as its location suggests, access is easy. We also visited other sites known to divers, to gauge the practicality of diving.

Significantly, the ones we saw all required the use of vertical equipment and proficiency with ropes, not to mention a fair amount of physical effort.

Our friends at the Aquatic dive centre were to rig Hiridoni Cave for us and, while the preparation was challenging, the dive through to a neighbouring cave, Sotira, was outstanding.

We were to pass a 240m-long sump, maximum depth 25m, in a passage regularly 20m square and richly adorned with stal formations throughout.

We surfaced to air on the far side to find scores of bats flitting to and fro between the low stal roof and the water.

The cave continues apparently for hundreds of metres more. These large tunnels need all the light that you can carry. We needed more!

THE FINEST DIVE on the island, indeed one of the best recreational cave-dives in Europe, was Karavomilos Lake Cave. Supremely spectacular, I cannot praise the place enough.

From the point at which you access the water at the mill-race exit point, it’s a 50m swim to the cave entrance.

We returned to Karavomilos for our last dip of the week. Knowing the spectacular size of the tunnel, on this occasion we took a battery of powerful video lights and swam in formation to get the best appreciation of its immensity.

As with the other sites we had seen, this shallow tunnel has to be 20m wide and almost as high for much, if not most, of its 240m length. Passing beneath the local church, the main road and much of the village, it’s amazing to consider that only a few metres of rock separates the cave roof from the normal world above.

Our Greek friends were interested in our assessment of the overall stability of the place, especially given the fact that the area regularly experiences earth tremors.

A major earthquake in 1953 had had a devastating effect on virtually the entire island. We were shown a significant rock-fall in the final section of passage in Karavomilos, where a few tons of debris had buried the dive-line in recent years.

Other than in this terminal chamber, the cave would appear to be perfectly safe.

AS WITH SO MANY other caves that we have experienced in earthquake zones, it’s amazing to see stalactites and stalagmites perfectly intact, and as beautiful as the day the cave was submerged. There were a few stal pieces lying on the floor of Karavomilos, but by and large the formations seem to manage to survive the earthquake vibrations very well.

Seeing my friends flying together in arrow formation, each equipped with spectacularly powerful lights, was awesome by any standards. I had no illusions: this is the largest flooded cave I have dived in Europe, and it’s superb – a European classic.

With its easy land-based access there is no doubt that this will be a very popular place with divers in future years. Barely have you submerged than you start to pick out calcite formations draped from the walls. At 150m from the entrance you enter a significantly larger section with fine grottos at either side.

Exhalation might reduce the visibility slightly but the silt never causes concern in Karavomilos. Few caves, or mines, present such favourable conditions.

We emerged after a 40-minute dive and a kingfisher studied us intently from a low branch. He’ll be seeing a few more sights like this, we thought… what a magical afternoon’s dive!

We are deeply appreciative of the support provided by Makis (Gerasimos Sotiropoulos) of the Aquatic Diving Club in Agia Efimia.

Aquatic Diving Club hires cylinders and runs a variety of boat-trips to dive some historic and more recent wrecks, including the WW2 submarine HMS Perseus six miles off shore, aquatic.gr. easyJet flies direct from the UK to Kefalonia until the end of October, when travel has to be routed via Athens.

Martyn Farr is author of The Darkness Beckons, available at farrworld.co.uk