This month marks a significant landmark, as ALEX MUSTARD  presents the 60th in this series on taking potentially prize-winning underwater photos. His subject? Leaving your strobes behind – do you dare to do it?

‘It is not an easy thing to do, because most of us are
paralysed by FOMO – Fear Of Missing Out’ 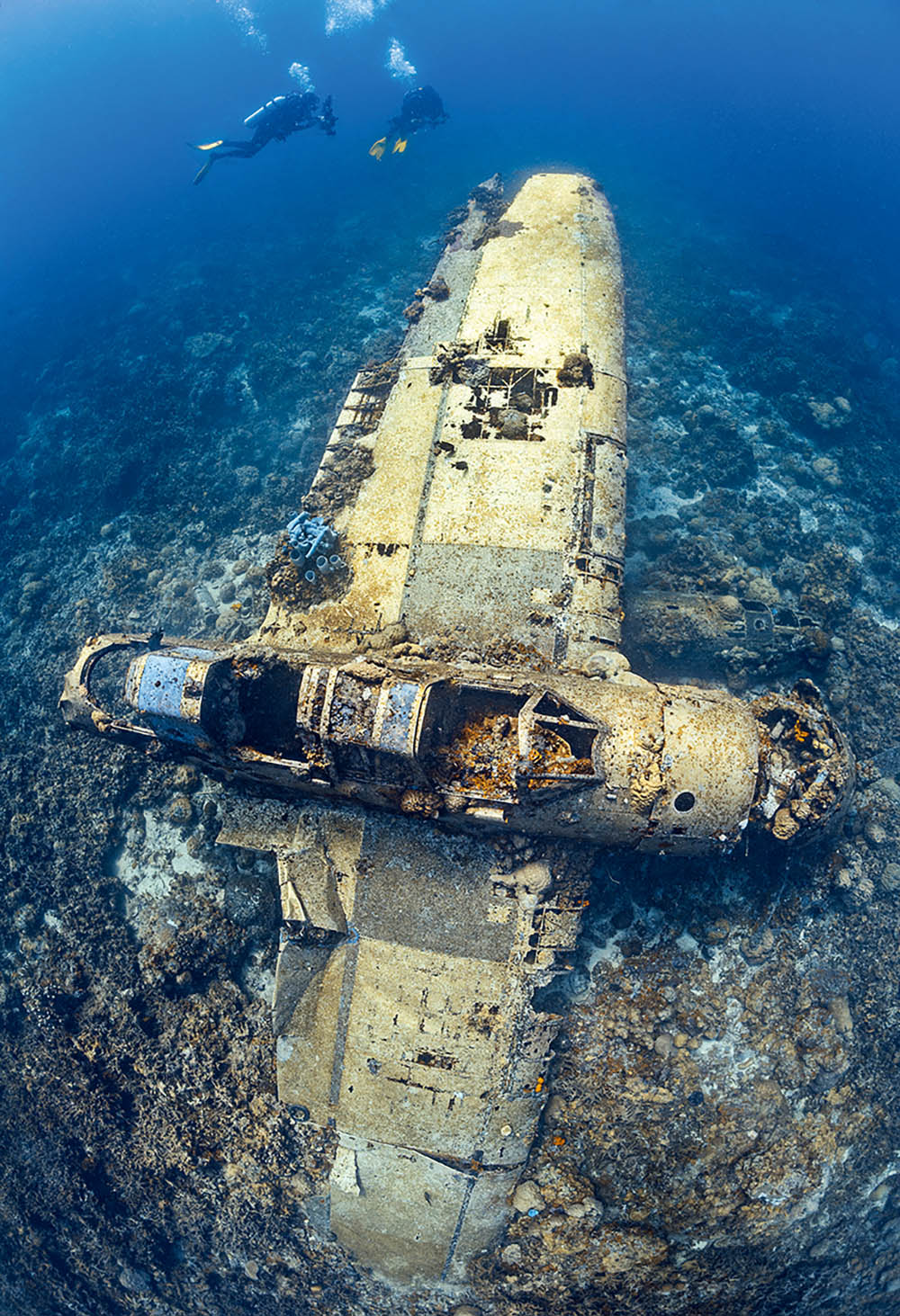 To exploit available light, we need to know it, working with the direction here to reveal colour and detail in this Japanese plane wreck. Taken with a Nikon D4 and Nikonos 13mm. Subal housing. Magic filter. 1/160th @ f/14, ISO 400.

EMBRACE LIGHT.  Admire it. Love it. But above all, know light. Know it for all you are worth, and you will know the key to photography.” These words by George Eastman, the founder of Kodak, probably popped into my head when selecting the photos for this month’s column, because the green picture below was taken not on digital, but years ago on one of his films.

Film, as I should explain for younger readers, is what we used before cameras went digital. Think of it as a combined image sensor and memory card, although one that had to be reset with a lever between shots and that only let us take 36 photos on a dive.

Oh, and it also wouldn’t show us our pictures, hiding them away for several days or even weeks before we knew if they had come out!

Much has changed in photography since those days, but Eastman’s advice is as pertinent as ever. Technology may evolve, but the way sunlight behaves under water remains a constant.

However, of all the branches of photography, underwater photographers are notorious for their lack of reverence for light.

We can come up with convincing excuses, such as having to focus on staying safe in an alien environment while shooting, but I believe that the real culprit is our strobes.

Most underwater photos are taken with flash, which take application and concentration to master. The result is that we become strobe-obsessed (some of us have even written a whole book on the subject!) and tend to take the ambient light a bit for granted.

There is a cure – to go for a dive without your strobes. It is not an easy thing to do, because most of us are paralysed with FOMO – the Fear Of Missing Out. Just as we’re about to detach our strobes and leave them on the boat our mind races with thoughts and what-ifs! My students regularly suggest to me that they will take their strobes and “only turn them on if they need them”, but this misses both the opportunity and the point.

Ironically, it is the FOMO about subjects that actually means we miss out on the valuable lessons about light. I strongly believe that we learn to embrace, to admire and to love available light under water only by doing some dives where it our only light source.

The time that we really get to know ambient light is not when it’s easy to use, but when it’s difficult. The most valuable learning comes at those times when the obvious option would be to use flash. But when that isn’t an option, we must figure out a solution with available light, and this is the path to knowing it for all we are worth.

Underwater ambient light has a strong direction to it, and it is the first and most important factor to consider whenever we use it. The rules are simple, the challenge is to consider them when a great subject comes swimming towards us!

When we want detail and colour in the subject, like the photo of the plane, we must always shoot with the sun on our back, so that it comes over our shoulder and fully illuminates the subject.

When we shoot against the light it increases contrast and creates silhouettes, giving impact but depriving the image of detail and colour in the subject.

Although light always comes down from above when you are under water, the sun is rarely directly overhead, so sunlight will also have a horizontal direction. Picking up on this and then exploiting it is crucial.

Light is strongly directional in clear, shallow water. Increased depth and reduced visibility don’t just lessen the amount of light, they eliminate direction, except for a gentle downward progression of light. While at a depth at which you can still see the sun, the light will have a clear direction.

Once visibility and/or depth obscure the sun, light is soft and directionless.

Do a dive without strobes. Don’t choose to try it at a macro site or on a night dive, but on a sunny day in reasonably shallow water.

Leave your strobes behind because they are a distraction, and also stop thinking about how to use the ambient light in tricky situations. In other words, they will stop you learning. 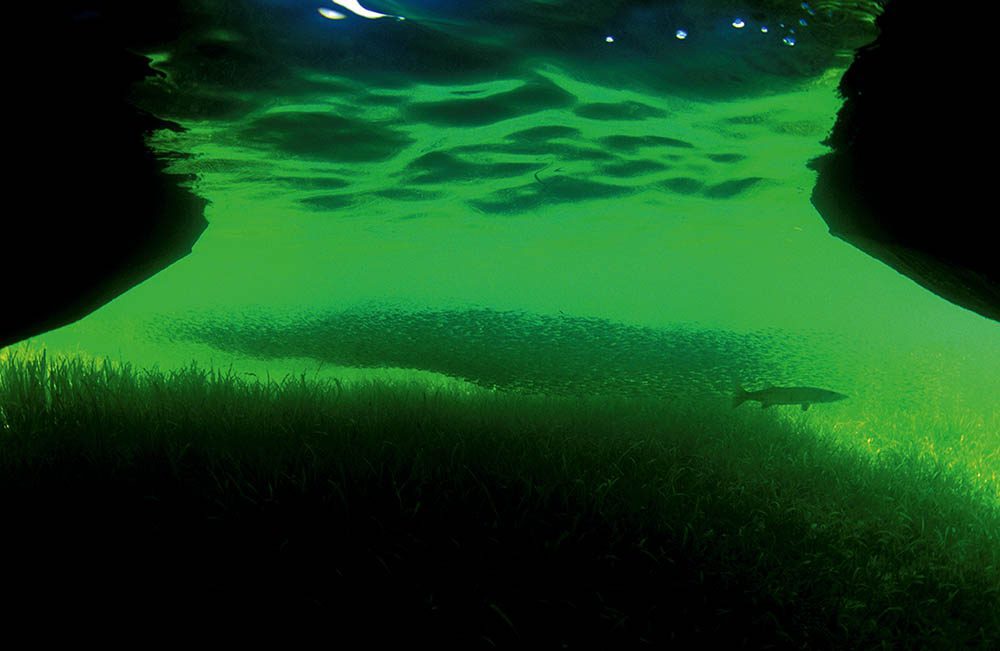 AMBIENT LIGHT images can be gratefully enhanced by processing, particularly in terms of colour and contrast – the two factors that shooting through water diminishes.

The first step should be to correct the colours using the white balance. In Lightroom, most people prefer to start with the white balance dropper, but to my eye this usually slightly overdoes corrections, so I often back off the values it produces slightly, moving both sliders to the left.

If the image is more of a silhouette, rather than try to correct for the colour cast in the water I prefer to leave it there. The green picture on the first page generates most of its atmosphere from the rich emerald hues, so we want to preserve them, rather than white-balance them away.

Ambient-light images often have a washed-out look, and most will benefit from a significant boost in contrast. The first step to increasing contrast is to strengthen the blacks (in Lightroom, move the Blacks slider to the left). The Dehaze slider moved to the right has a similar effect.

Ambient light in shallow water usually has a clear horizontal direction. This means that you must be disciplined in how you approach subjects, and know that not all subjects will be available on any one dive.

If in doubt, swim into the sun, then turn back and shoot the subject to maximise colour and detail. 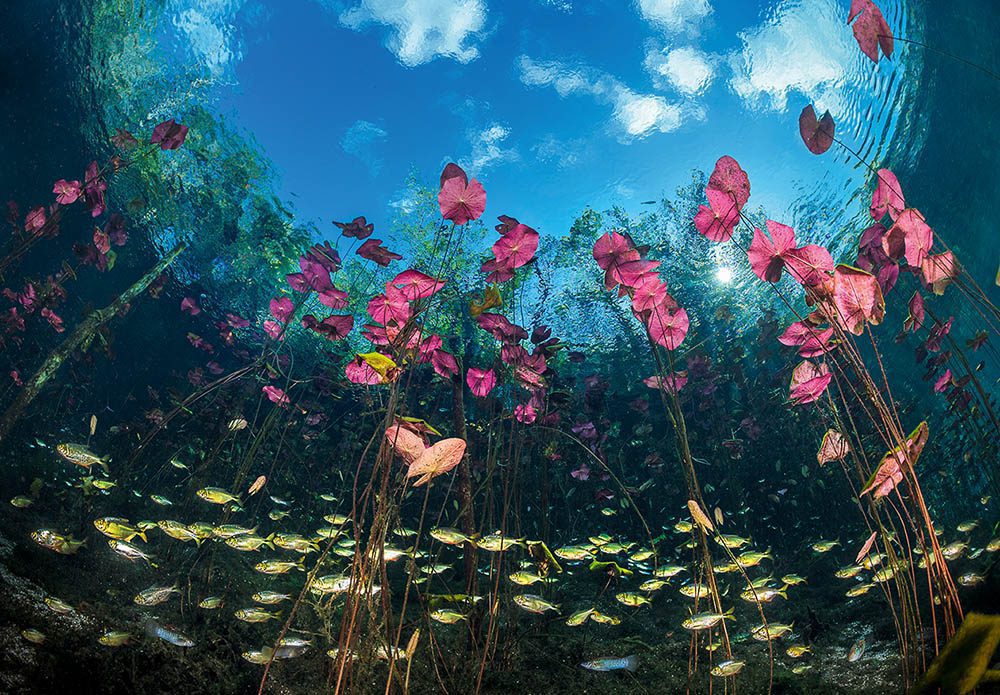 We can then add further contrast using the contrast slider or the clarity slider, probably requiring higher values than our strobe-lit shots. At this stage we might need to back off the Blacks or Dehaze a little, as both have a tendency to obscure detail in the darker parts of the picture. Get the tweaking right and your pictures will really pop.

The twist in this tale is that the real pay-off of truly knowing ambient light happens when we attach our strobes again. A handful of dives shooting in just available light massively enhances our knowledge of light, and this will transform our capabilities when shooting wide-angle with our strobes.

Or, in the words of my double-act partner Martin Edge: “Photography is all about light; underwater wide-angle is all about the natural light.”

In Photoshop I like to use a feature called High Pass Filter to add contrast and pull out detail, blending in soft light mode.

The larger the details you want to pop, the coarser you should set the filter radius. 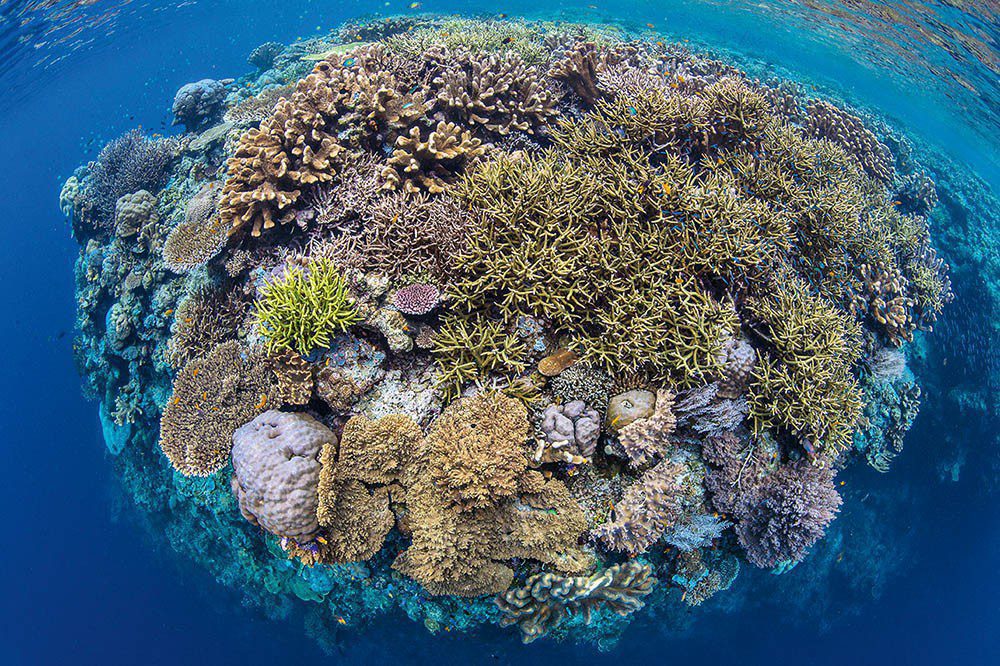