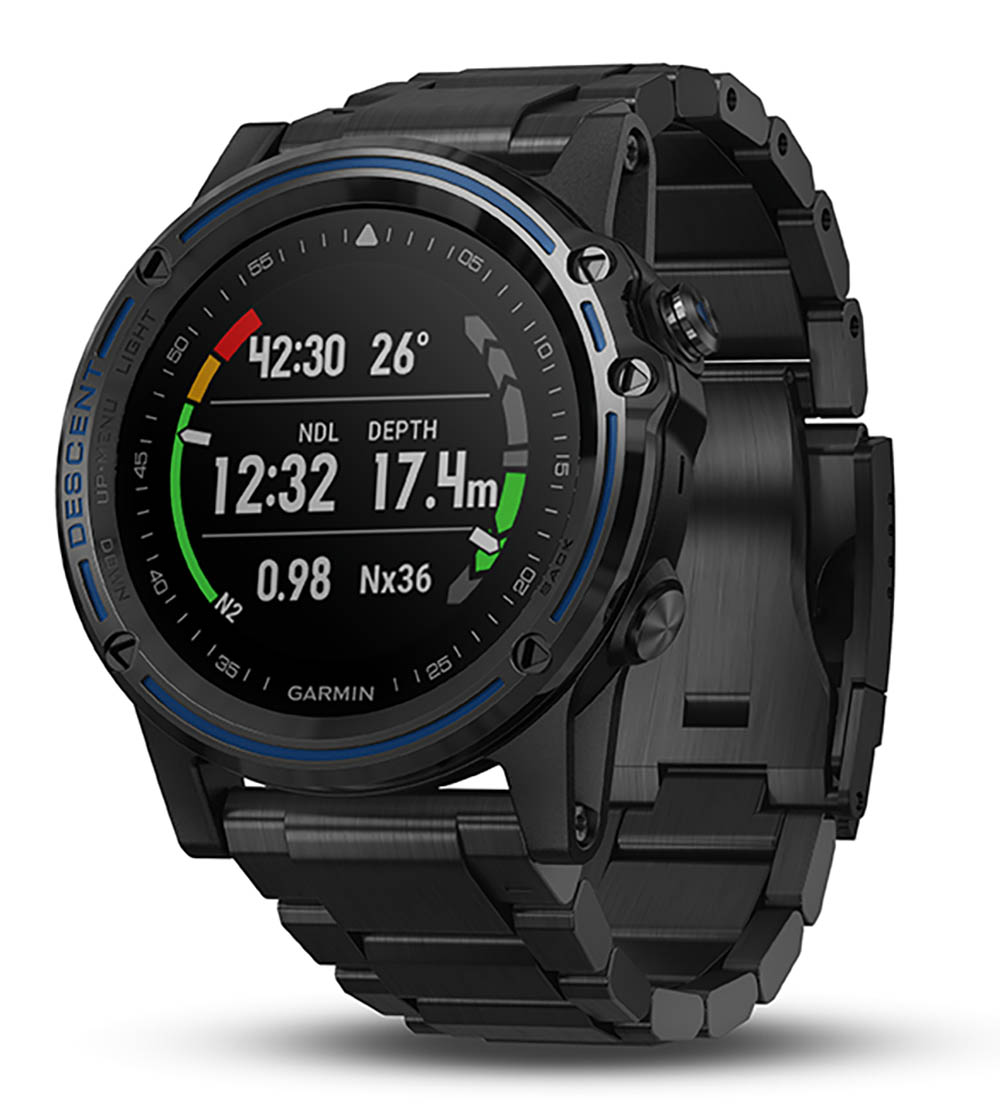 THE WATCH-STYLED DESCENT Mk1 is the first dive-computer from US marine-electronics giant Garmin, and the hype preceding its availability has been astonishing. I’ve been told by more than one industry insider that it was the wow product of DEMA last year, and that it takes dive-computers to a whole new level.

To be fair, it’ll need to be a bit special. The dive-computer marketplace is pretty well stocked, with mass-appeal models from established and respected makers, and more niche offerings from smaller players delivering pretty much all the functionality you could ever want. So if Garmin is going to convince you to launch your hard-earned wedge in its direction, it’ll take more than pre-launch hype.

And, of course, the downside to hype is that it raises the bar of expectation very high. If the new computer turns out to be merely very good, it’ll be disappointing. But, spoiler alert, it isn’t disappointing.

On with the test, and Garmin has nailed the first-impressions thing. It sent me the range-topping titanium-bracelet version to try, and the moment I’d freed it from the high-quality box and removed the lavishly applied protective plastic film, the unit nestled in the palm of my hand and simply oozed build-quality. 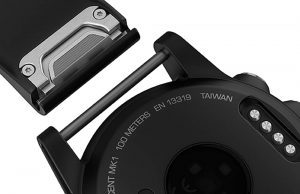 If you decide on the metal-bracelet version, you’ll probably need it to be shortened to fit, as I did, and to give you an idea of how special it is, despite my well-deserved reputation for thriftiness I found myself thinking in terms of a visit to a jeweller instead of digging out my own set of tiny screwdrivers. I’d hate to spoil the finish of that bracelet.

As it turned out, I had no need to worry. Inside the box was a plastic strap, and switching the straps required no tools and was not fiddly. Long- and short-tongue plastic straps are supplied, so you can wear the Descent on your naked wrist or over the top of even the bulkiest drysuit.

The face is a decent size, and the unit is quite bulky for a watch-style instrument. I couldn’t fasten the cuff of a long-sleeved shirt over the Descent, but it never really felt over-weighty, and I quickly stopped noticing it on my wrist, even though I don’t usually wear a watch.

Strap sorted, I charged the unit up with the supplied USB cradle. This clips easily and positively to the back of the watch and can be plugged into a computer USB port or used with a mobile-phone charger.

Garmin claims around 10 days’ use as a watch or 40 hours of dive-time before recharging is required, and after using the computer for a while those figures seem realistic.

To activate and control the Descent, you use the five buttons set around the face, three to the left, two to the right. They’re nicely weighted with a decent travel, so they won’t press accidentally, but are light and positive when used.

The button at top left switches the built-in light on and off. The others allow you to scroll through the various menus, and enter and confirm settings.

As usual, the first job was to set the unit up by confirming my preferences for metric units, seawater diving and so on. But then the Garmin asked for my age, height and weight, which was a first for me, and demanded to be paired with my smartphone so that it could access the Garmin Connect Mobile app.

Unusual, certainly, but it’s only when you start to explore the full range of functions and the add-ons that can be accessed via the app that the difference between the Descent and an ordinary dive-computer become clear. We’ll come back to that.

The Descent uses the Buhlmann ZHL-16c algorithm to calculate your decompression requirements and offers three levels of conservatism, with a default setting of high.

If you prefer, and you know what you’re doing, you can set your preferred gradient factors, for which the default setting is 45/95.

Out of the box you get a choice of five dive-modes: Single Gas, Multiple Gas, Gauge, Apnea and Apnea Hunt.

The latter seems to be the same as Apnea but with the alarms turned off so as not to disturb the prey for which you’re spearfishing,

a clue that the Descent comes from a US maker.

Select Single Gas mode and you can dive air, nitrox or trimix. Select Multiple Gas and you can set a bottom gas and up to five back-up or deco gases using any combination of oxygen, helium and nitrogen.

Gas set-up is simple, and gas-switching is a one-button operation when you’re diving. It’s a well thought-out and user-friendly unit.

Once you’ve entered all your preferences and dropped into the water, the computer will enter Dive mode as you descend deeper than 1.2m. 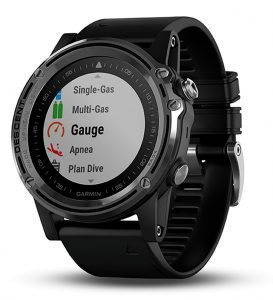 Dive-mode selection screen. This computer is fitted with plastic strap.

The real estate provided by that big face is well used. The left of the screen shows a graphical representation of your nitrogen-loading, and the right has a similar graph allowing you to keep an eye on your ascent and descent rates, and then shows oxygen toxicity when you’re bimbling along.

In the middle of the face are the numbers

for no-decompression time, depth and any required stops, and the size of the face means that the numbers are big enough to read easily.

You can set alarms for pretty much anything, so the computer can chide you for being naughty, if you like that sort of thing.

In the water everything makes sense, and the computer is easy to read and follow, although I’ll admit that I don’t see much point in a descent-rate graph. Get in, get down and get on with it, I’ve always thought.

While we’re under water, the compass function is very good. Actually, it’s better than that. You use the bottom-left button to scroll to the compass during the dive, and can set a heading by pointing the compass marker in the direction in which you wish to travel and pressing the button top-right.

You can easily switch to the reciprocal when you’re ready to swim back, or select a course at right angles to your current course to left or right. This unit would make that swimming-in-a-square exercise so beloved of dive-instructors a piece of cake. 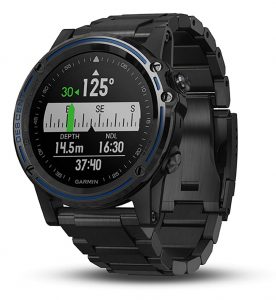 And when the compass is active, you still get important decompression information presented at the bottom of the screen.

If you don’t like buttons, you can scroll through the screens by tapping the face of the watch, which is an excellent way to access the compass when you want it.

In fact, the only things missing from this computer are a CCR mode and gas integration, neither of which facilities seem to make much odds to the majority of divers I know.

So far, so good, then, but now it’s time to get into some of the features that make the Garmin far more than just another dive-computer.

Your first clue is that the Descent will automatically record your location on submerging and surfacing, subject to you holding your wrist clear of the surface until the GPS indicator turns green, to tell you that it has acquired a satellite fix.

In fact the watch also functions as a GPS unit, and can be used to navigate from place to place.

It comes pre-loaded with land-maps, and you can buy detailed maritime charts via the Garmin app.

At which point we start to leave scuba trailing in our wake and get properly outward-bound in an explosion of jaw-dropping technology.

For example, the Descent Mk1 comes pre-loaded with the layout of more than 40,000 golf courses, and can then utilise the inbuilt GPS functionality to tell you how far you currently are from the front, back and sides of the next green, or get you back to the bar when you’ve had enough.

You can even create a bespoke scorecard to keep track of your progress around the course, and if you buy an additional sensor, also made by Garmin, it will allow you to analyse your golf swing.

Not a golfer? You can also use the Garmin to record and analyse your running or swimming performance, or record how many steps you walk in a day. 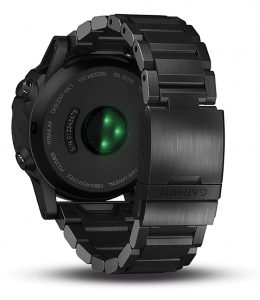 Green lights of the heart-rate monitor.

Notice the green lights on the back of the unit? They’re a heart-rate monitor, and with the age, height and weight data you’ve already input you can use it to develop and monitor a training regime and document your improved performance.

And it gets more involved. Most runners slightly favour one leg over the other, and the Garmin will allow you to record your foot-strikes and the duration of foot contact for each leg to help you correct any imbalances.

If you go skiing, the unit will automatically time your runs, sensing when you’ve stopped loafing around at the top of the slope and started to slide downhill.

Or you could buy a Garmin VIRB action camera and control it from your watch. Or use it as an alarm clock, or a stopwatch, or do all sorts of other clever stuff.

If I tell you that the manual has 48 pages and only five of them cover using the Descent Mk1 as a dive-computer you’ll get the idea – and that’s without even mentioning the app.

Bottom line, the Garmin Descent Mk1 is an amazing piece of kit, and I do mean amazing. The word is over-used these days, but not here. The only real problem is how I sum up such a radical instrument.

Actually, it’s easy. As a dive-computer it’s perfectly adequate, though nothing outstanding, but the range of functions you get as standard and all the add-ons available put it in a class of its own.

Look around you at the technology available these days, and it’s clear that single-use devices are dying out. Take cameras. Compact cameras are dead, long live the phone-camera, and the Garmin Descent Mk1 feels to me like the start of a new trend in diving instrumentation. Welcome to the future.