A seagrass festival in the Balearics? Would there be enough to write about? RICHARD ASPINALL didn’t know it, but he was about to live his dream 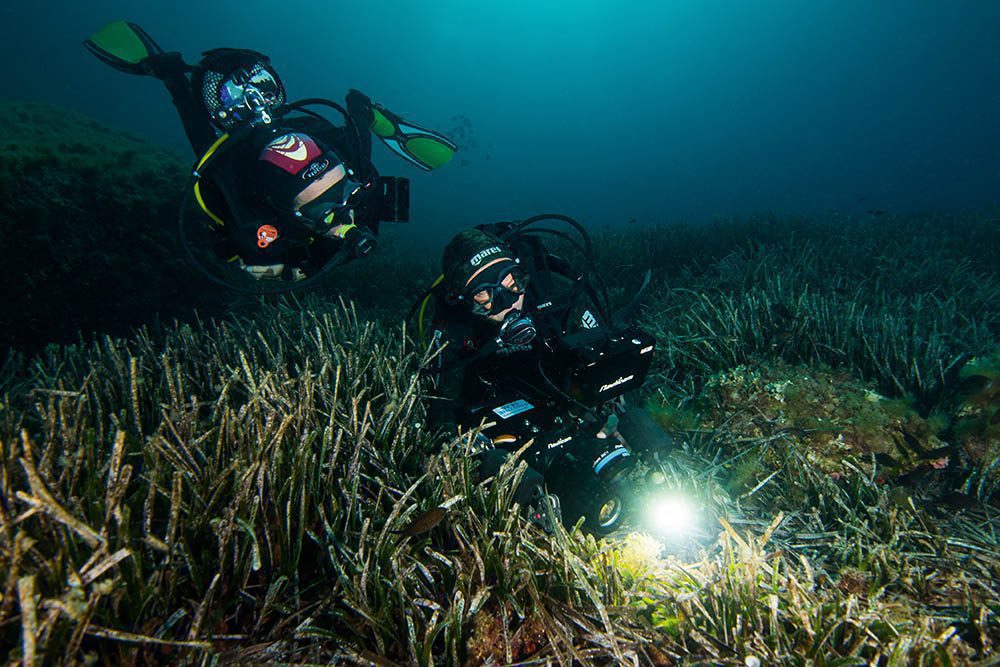 Diving in the Posidonia seagrass beds.

THERE ARE FEW PEOPLE as pleased with themselves as divers who have just photographed their first seahorse! I’ve been diving for 13 years, and these wonderfully charming and downright odd-looking fish have always managed to elude me.

Many a dive-guide has told me that had I been around last week I would have been in luck, or something similar.

I did wonder if I was the victim of a conspiracy, attempts to see for how long I could be convinced to stare at weed-covered rocks. No longer, however – I am finally part of the seahorse-spotters’ club – not a claim I thought I’d be making after a trip ostensibly all about seagrass.

What can I say that’s interesting about seagrass? I had pondered that question as the ferry pulled out of the Balearic island of Ibiza, heading for the smaller and much quieter island of Formentera.

It was a short journey, past a series of low rocky islands and beaches that suggest that Formentera doesn’t really want to be separated from its bigger brother. The two seem to reach out towards one another, reluctant to let go.

Formentera’s water looked clear, and I could see sandy patches and darker areas of seagrass full, I hoped, of interesting critters. 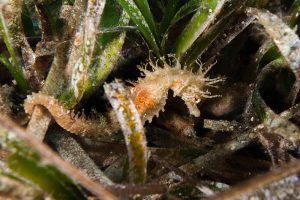 A seahorse spotted among the seagrass blades.

I found myself thinking about the way we interact with life in the shallows, especially the plants. I suspect that many of us tend to ignore the green leafy stuff in the pursuit of depth, or a wreck, for example. Seagrass, or even stands of kelp and wrack in UK waters, might be something to have a quick gander at on a deco stop, but unlikely to be sought out as a “destination” in itself.

This was going to be a challenging assignment, I suspected, but with scuba-diving you never quite know what you’re going to get or who you’ll meet.

Formentera is a small island reliant on the tourist trade and keen, it would appear, to develop without damaging its flora and fauna, on land or beneath the surface. Part of that approach lies in recognising and valuing what the island has a great deal of, and that’s seagrass.

I’d been invited to cover the island’s Save Posidonia Festival, a series of events designed to encourage locals and tourists alike to value Formentera’s rather special underwater meadows. I was later to learn that these are some of the oldest and largest living organisms on the planet.

AFTER A QUICK SNORKEL from the beach at Es Pujols on Formentera’s north-eastern flank to look at some seagrass meadows, I headed inland to the town of Sant Francesc Xavier, to ask Pierre-Yves Cousteau what made Posidonia so important.

Pierre-Yves, the youngest son of Jacques, had been invited to talk about how much carbon seagrass meadows absorb and lock up in their roots, and in the reefs they create.

Chatting after his address, he told me how seagrass meadows, especially Posidonia oceanica (which is found only in the Mediterranean), is far more efficient at storing carbon than any forest, and that some reefs can be many thousands of years old, with certain meadows shown to be massive colonies of the same individual.

All very fascinating, but I was itching to get under water. The next day I would get my chance.

I was diving with the Vellmari centre, located on the harbourside at La Savina, the island’s capital and ferry port. Vellmari is owned by Manu San Felix, a tremendously skilled underwater videographer and photographer himself and a friend of Pierre-Yves, who had decided to join us. I was in fine company.

We headed out of the port and into the marine-protected area that covers a fair chunk of the island’s surrounding waters.

Leaving La Savina, we turned left, rounding the rocky outcrop of Punta de sa Pedrera before mooring to a buoy at a site called Es Banc.

The sun was high in the sky, and the vis looked great. “We’ll follow the ridge to a shoal of barracuda,” said Manu. “Past an arch and then maybe we’ll see a seahorse.” That all sounded far too much to expect from one dive, I thought.

THE WATER TEMPERATURE was around 23°, and as I dropped to a seagrass meadow below me and turned my spotting torch on, what appeared from above as dark and dingy stands of seagrass came alive with life.

Amid the plants’ roots were delicate growths of algae, coral-like with their calcified structures. Orange and yellow sponges, lace corals, cup corals and tubeworms were everywhere among the Posidonia’s fibrous roots. I was quickly gaining a new appreciation for the stuff.

The plants’ long strappy leaves were covered in minute life and, at the roots, new bright green leaves were growing.

A slightly rockier area held an octopus that eyed me warily. It had collected shell remains and rocks around its hole for protection, and was holding them ready to pull over its head if I got too close.

Everyone had now descended. We all signalled OK and finned across the meadows alongside a limestone ridge that soon gave way to a fine arch, with a span of 5 or 6m.

Several large grouper, and a shoal of brown meagre and zebra bream parted to let us explore. Small, bright red cardinalfish hung close to the arch’s ceiling, while growths of Posidonia atop the structure looked like wild tufts of hair.

The cardinalfish, not caring which way was up, were upside-down, holding station just beneath the arch’s roof.

Before long we encountered the barracuda. Manu had said that they were approachable, and he was right.

As we took up position for a shot or two, they slowly circled above us. It was hard to estimate their numbers, but there were at least a hundred, sunlight glinting on their silver flanks.

We turned and headed back, past the mooring-line, sunlight streaming down.

I was bothering a few more octopuses until Jose, one of Vellmari’s team, started banging on his tank like a man possessed.

He was pointing and calling me over in between making a racket, pointing into the Posidonia. And there, on the edge of a patch of seagrass, tail wrapped around a leaf-blade, was the first seahorse I had ever seen in the wild.

Slightly cursing my wide-angle lens, I finned ever so slowly towards the shy animal to marvel at its camouflage. I took a few shots and pulled back, allowing Manu in with his video camera. We were all rather pleased with ourselves!

Back on the boat, Pierre-Yves and I confided to each other that this seahorse was a first for both of us!

Next morning, I took a little time to explore the island, visiting salt-pans, bird reserves and dunes before joining Vellmari for one more dive. I’d asked for another chance to shoot close-ups, and fitted a macro lens. 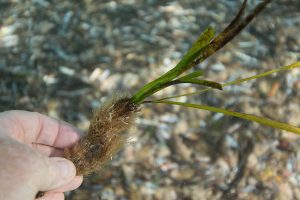 Was I being greedy? I’d enjoyed an almost perfect dive the day before. “There are many nudibranchs at Es Banc,” Jose suggested, and I didn’t need much arm-twisting. A few nice nudis would be fine, and you never know, the seahorse might still be there, I thought to myself.

The vis had improved a little, with a mild current from the south, to at least 30m. We found a few bright purple Flabellina nudibranchs quite quickly, and I set to work trying to shoot these delicate animals, with their fine cerrata flailing in the current.

I kept looking over to Jose, who was scouring the seagrass bed, hoping to find another seahorse. I found another nudi, this time a migrating aeolid, and then decided to join him.

In a perfect world, and to make for a better story, we’d have spotted one with minutes to spare… or even two, but we all know that diving doesn’t work like that.

Still, I had my seahorse pics and an almost perfect dive. I mentally wished the curious little fish well in all that lovely Posidonia, stretching into the distance.

My last memory of the dive was of handing my camera up onto the boat and looking down at the seagrass, and seeing it swaying gently in the current.

Of all the thousands of years it’s been there, providing refuge for uncountable numbers of animals, long may it prosper. I remained smug for quite some time.

GETTING THERE> Several airlines fly to Ibiza from UK airports. Ferries from there to Formentera are fast and frequent. Tickets can be bought on the ferry or online. Those operated by Trasmapi are ideal for foot passengers, trasmapi.com. Car and scooter hire is available in La Savina, near the ferry terminal.

DIVING> Vellmari offers diving and training for all skill levels to sites around the island. Nitrox and rental gear are available, vellmari.com

WHEN TO GO> You can dive year round, but fewer tourist businesses are open in winter and fewer flights are on offer.

VISITOR Information> The trip was sponsored by the Formentera Tourist Board (formentera.es) in collaboration with the Balearic Islands Tourist Board, illesbalears.travel