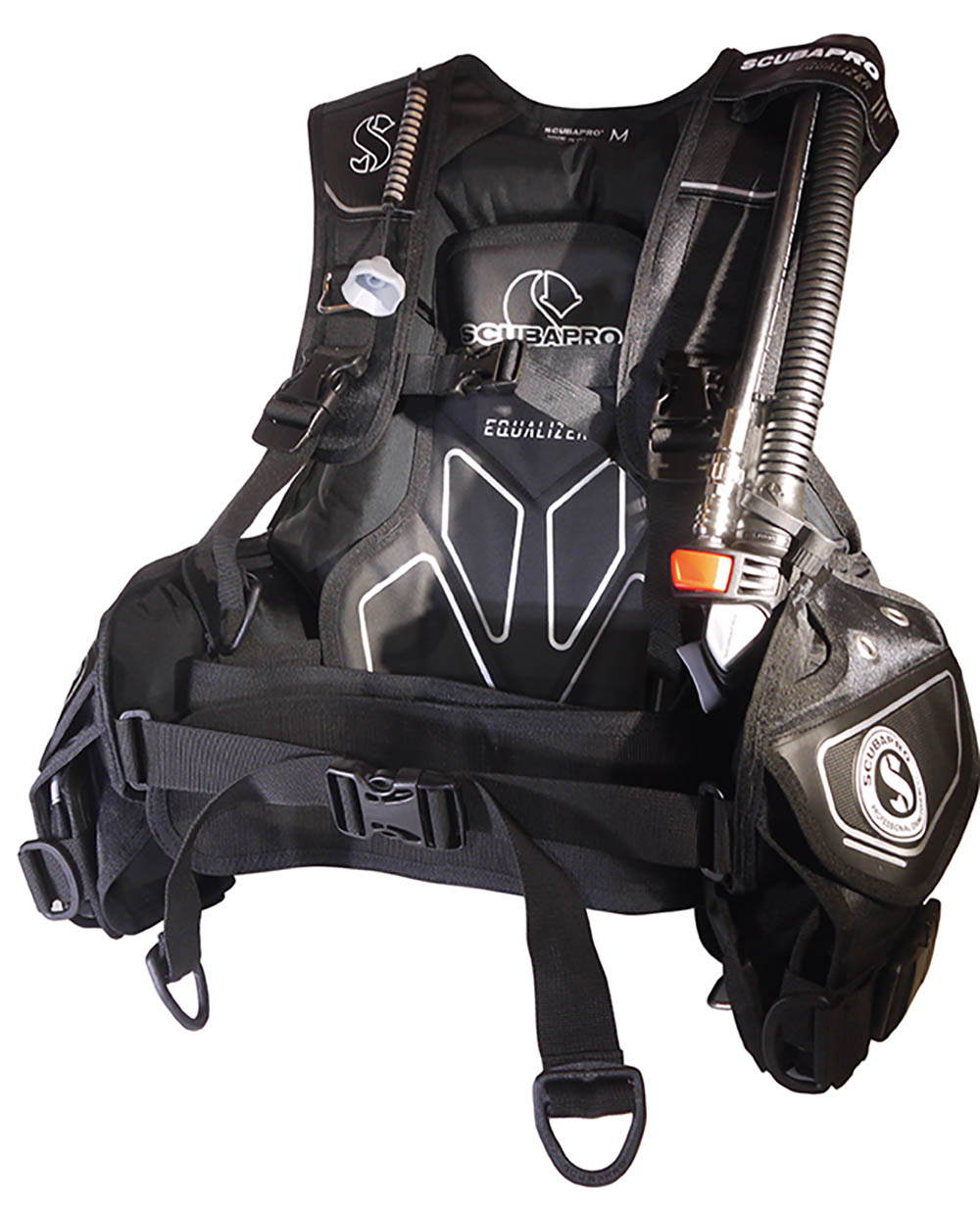 As one of Scubapro’s least-expensive BCs, the Equalizer is likely to find favour with casual divers, schools and clubs. It’s rated for single-cylinder use, with Scubapro setting a limit of a 10-litre tank for the XS size and 15 litres for Small on up.

It’s a single-bladder BC made from 420-denier nylon and polyurethane. Part of Scubapro’s front-adjustable range, it’s a conventional jacket-style BC with breakaway shoulder-straps.

The full-length backpack is rigid and shaped to transfer weight onto your hips. It’s padded and sports a top handle. A conventional cam-band is supplemented by a height-adjustment loop that ensures that your Equalizer always sits in the same place on your tank.

There are two shoulder-straps with fixed-position buckles and chest-strap, a waist-strap and buckle and a wide cummerbund. All the buckles are pinch-clip types, with a touch fastener used to close the cummerbund. 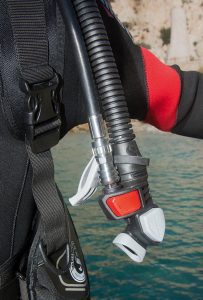 The harness design makes this BC a real rib-squeezer when you inflate it, if you don’t first set it up correctly. This isn’t a fault – it’s common to a lot of jacket-style BCs, especially budget models. I set my test Equalizer harness up with the air-cell fully inflated. If you don’t do this, inflating the BC will make it hard to breathe.

Wanting to evaluate the comfort of the BC out of the water, I put on a 5mm wetsuit jacket and longjohn, placed 8kg of weight in the pockets and attached a 10-litre/300-bar steel cylinder and a regulator for an all-up weight of around 23kg.

I then walked it about half a kilometre each way to and from the shore dive-site, including up and down two flights of steps.

Before a single test-dive I’d developed lower back pain, but even then the Equalizer was very comfortable to schlep.

Along with integrating your scuba system, a BC’s main roles are to provide stability under water and positive flotation on the surface. 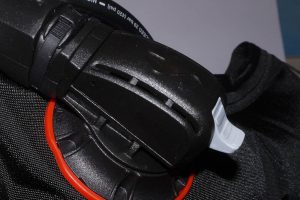 I tested the Equalizer using a thick wetsuit, as I didn’t want the buoyancy characteristics of a drysuit influencing the results.

The Equalizer doesn’t have pockets for trim-weights but I found stability to be as good as that of most other BCs I’ve used.

Trim was excellent. I was held horizontal, with minimal fin movements needed to correct any pitch. That means using less air, tiring less easily, and being less likely to kick up clouds of sediment.

At the surface, the Equalizer floated me upright. There was no tendency to fall forwards; no need to fin to keep my face out of the water.

I measured the distance from water level to my lip while holding a neutral breath and with a full cylinder while properly weighted, to assess whether an out-of-air diver at the surface would ride high enough to be able to breathe through the mouth.

The full cylinder slightly slews the results, as it will weigh about 3kg more than an empty one and makes the diver float lower in the water.

The Equalizer lifted me about 15cm above the waterline, in the usual ballpark for a BC with this much lift.

Scubapro describes the pockets as large. They’re not, they’re tight. They aren’t expanding pockets and you’ll struggle to put much in them other than slates.

Even taking those out or replacing them isn’t easy, especially at the surface with BC inflated. 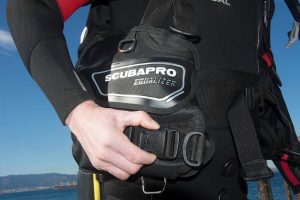 Weight releases work well, but the D-ring could confuse a rescuer.

If you’re carrying reels and marker buoys, you’ll need to clip them onto the outer D-rings.

The pocket-flaps are secured with a touch-fastener and the left pocket has grommets for an optional dive-knife. There are gussets behind the pockets into which you can stuff loops of octopus hose to minimise snagging.

There are three large pre-bent and one small unbent metal D-rings. As a photographer, often hanging a camera system worth thousands of pounds off my BC, metal D-rings give a greater feeling of security than plastic.

For roped diving, such as exploring under ice, they’re also a safer mooring point for lifelines.

The Scubapro Balanced Power Inflator is easy to use and has differently shaped and coloured deflation and inflation buttons that are simple for the wearer to tell apart by feel, and for another diver to distinguish by sight.

For oral-inflation it has a stem rather than a full mouthpiece, so it’s quick to place against your lips to orally inflate under water if your direct-feed fails or, at the surface, if you’re out of air.

The direct-feed button is progressive, so the harder you press the faster it inflates. Using the supplied Scubapro hose, I timed the fastest inflation rate from empty to full at the surface and at 10m, which took five seconds.

To confirm that the Equalizer could dump air faster than it inflated, I opened the shoulder-dump and maxed the direct feed. It worked – an important safety feature to prevent a runaway ascent in the event of a direct-feed freeflow.

However, I initially had a problem when testing the dump built into the oral inflator elbow. I went sailing to the surface, even though I thought I was pulling down on the oral inflator hard enough to open the elbow-dump.

On the second attempt I did manage to brake the ascent, about 3m from the surface.

Later, discussing the test, my photographer Nicky Martinez noticed that the retainer that clips the direct-feed hose to the oral inflation hose was fitted just above the restraining epaulette. As I pulled down on the inflator to activate the dump, the retainer jammed against the epaulette, interfering with the dump’s proper operation.

Once the retainer was moved out of the way I retested and the dump worked flawlessly.

At least  readers can be assured that Scubapro didn’t spend hours specially prepping the Equalizer before letting me use it! 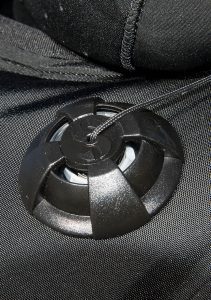 To further test the effectiveness of the dumps, I fully inflated the BC 10m down, let go and measured the stopping distance once I had activated either upper dump by itself. This took about a metre, confirming that a runaway ascent can quickly be brought under control.

The shoulder- and bum-dumps have nice big chunky toggles that are easy to locate by feel and are in hi-vis colours which, like the controls on the oral inflator, make them easy for your buddy to identify.

You can also vent from the elbow-dump by depressing a small switch. Scubapro is not alone in providing limited product information about equipment submitted for test or available to the consumer, and I was curious about the benefit of this unexplained switch.

I thought it might be useful to a rescue diver making a controlled buoyant lift of someone wearing an Equalizer. Rescuers are often taught to do this from the back, so this control might be easier to operate than the other dumps. I didn’t have time to test this.

There’s a bit of bleed back through the dumps, so at the end of the diving day, you’ll need to drain a little water from your jacket. This is normal.

Safety specialists claim that in as many as 80% of recreational scuba fatalities, divers fail to jettison their weights.

A weight-release needs to be easy to jettison, yet not easy to release by accident.

Some manufacturers use systems that are very quick and instinctive to drop, arguably at the risk of being more vulnerable to unexpectedly falling out due to snagging of the release-handle or improper loading.

I wondered whether Scubapro had gone too far the other way, and made its weights hard to drop. Operate a pinch-clip and the weight-pockets should naturally fall out. There is a very obvious D-ring – but this is used to tighten the weight-pocket into position.

While it could be used to pull out a stuck weight-pocket, that isn’t its main purpose, so it’s essential to ensure that anyone who might need to assist an Equalizer-user understands that simply pulling on the D-rings will not jettison the weights in an emergency.

D-rings are not identified by hi-vis colours, so they are less obvious to a rescuer.

In use, in fact, I was surprised at how easy to use and how effective the releases were, with or without gloves.

As an entry-level BC, the Equalizer would be a good choice. It performs the main two tasks of a BC – providing underwater stability and surface flotation – admirably. The features that are missing, such as trim-weights and larger pockets, are offered on other Scubapro jackets at, naturally enough, a higher price.

For a diver keen to keep costs down and for amateur diving clubs and commercial schools needing inexpensive loan or rental BCs, the Equalizer has much to recommend it.