MICHAEL AW finds himself in deep doo-doo as he pursues the perfect shot of the southern right whale – shame they like it so green and murky! 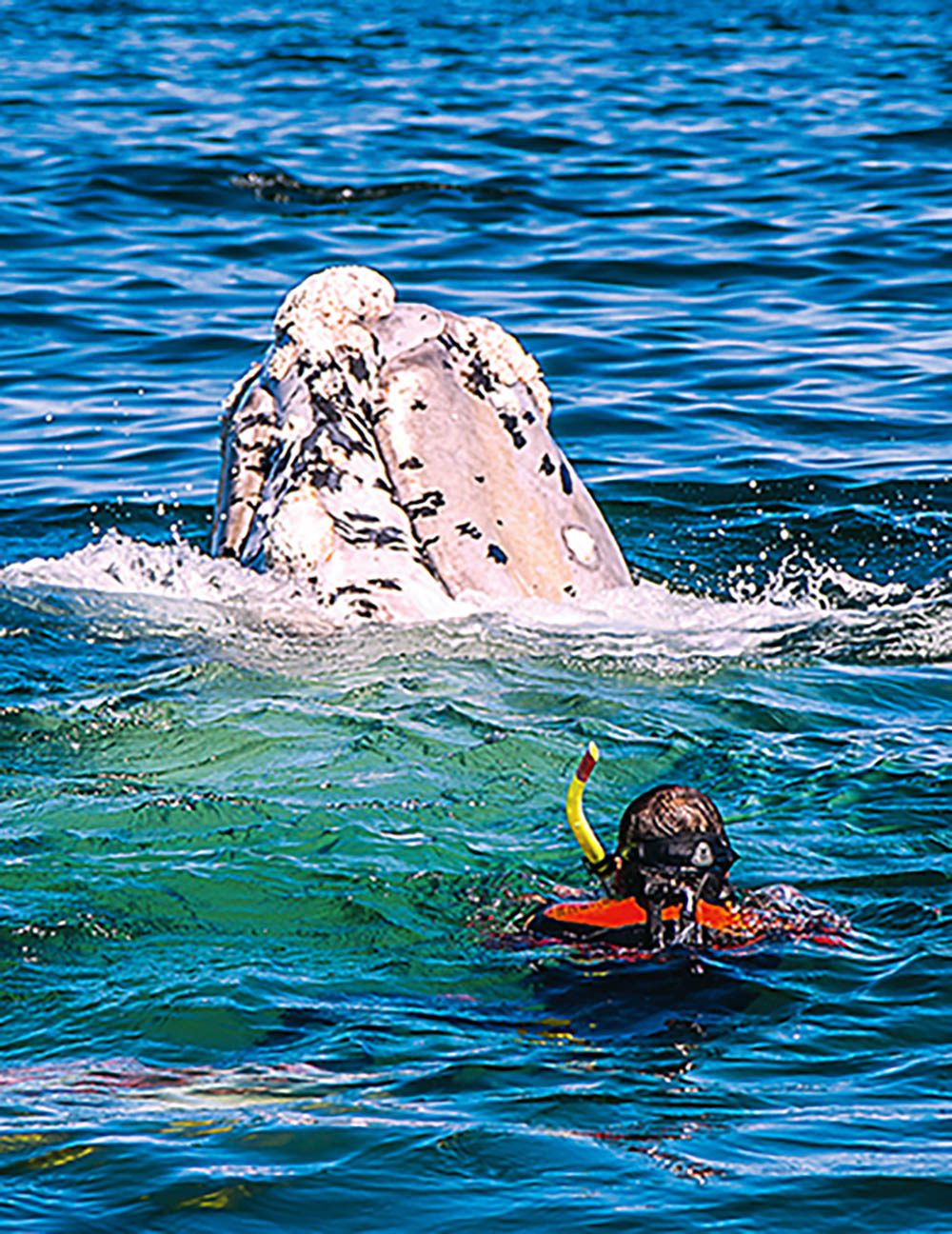 IN MAY OF 2015 I was in South Africa in pursuit of sharks, sardines and penguins. One evening, resident wildlife photographer Jean Tresfon called to ask if I would be interested in shooting a pod of southern right whales that had remained around the western coast of South Africa from the previous winter.

Is the Pope Catholic? The stars seemed to align as Rainer Schimpf, my local fixer, expedited a permit application to the Department of Agriculture, and we were granted one overnight.

Armed with my permit to interact with the whales under water, I flew to Cape Town. A couple of friends, Michael Valos and Gary Peart, joined me for this very special adventure.

It was a halcyon morning with blue skies and a mirror-flat sea when we found our whales, 300m offshore. It had taken us only five minutes. Whales seemed to be popping up all over the bay, and I thought this was simply too good to be true.

Psyching myself up to face a 50-tonne mammoth, I slid into the path of a whale less than 10m away and swam stealthily towards it. I swam and I swam. Where was that whale?

I know that right whales are black but still, how I could possibly miss a colossal, 13m-long giant just ahead of me?

I stretched out my hand – and realised that I could hardly see my fingers! The water was dark, murky, green and cold. Visibility was barely 25cm!

BY NOW I’M SURE you can feel my frustration – beautiful sky, calm sea, whales everywhere, but we just could not see them under water, even though they might have been right in front of us.

For the next hour, we scouted around the bay for clearer waters. As I looked back towards the city skyline, I saw whales frolicking against a backdrop of high-rise office towers and apartments nestled at the base of Signal Hill (a flat-topped hill in the shape of a lion’s rump) and Table Mountain. 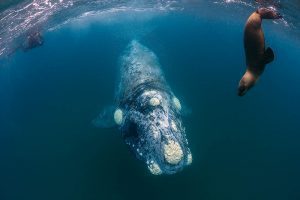 I spotted several colourful paragliders taking off from the mountain to descend upon this 21st-century megalopolis, and said to myself: “Cape Town, what a wonderful city!”

That was when Jean interrupted my thoughts, pointing to a cloudy brown patch in the sea, and enlightened us about what turned out to be the outfall from the Green Point sewage outlet, just a mile offshore. The “deepwater” outlet is 30m deep, and releases 30-40 million litres of untreated sewage into the bay daily.

The smell of sewage was all around us. “This wonderful city is not so wonderful after all,” I thought, “especially when the westerly wind blows.” The scent of this sewage gets blown right back into the city. Ah, the fragrance of Table Bay!

So there we were, surrounded by right whales, but in the wrong place.

After another infuriating hour of futile attempts, luck came in the form of a small, white package. Well, about five tonnes small – it was a rare encounter with a juvenile brindle!

Only 2% of southern right whales are born white, and they’re mostly males. This young lad was boisterous, curious and friendly. He kept approaching our boat, making passes again and again. We interpreted it as an invitation to play and, of course, we obliged with little hesitation.

Though the working conditions remained challenging, being white with black patches made this juvenile somewhat easier for us to focus on and shoot, once in very close proximity. He certainly was the “right” whale to shoot in dark, green waters.

On one occasion he rose to the surface right in front of me. He stayed for quite a while, making numerous passes until his mother came and beckoned her frolicsome child away.

FOR THE NEXT FIVE DAYS, we found the whales every day in perfect weather conditions, but always in atrocious near-zero water visibility.

However, I felt very lucky to be in the ocean with the mysterious southern rights, and even luckier to have encountered the playful rare white juvenile, but I am not done yet, and plan to return.

After being hunted almost to extinction, right whales, though protected worldwide since 1935, remain the rarest of whale species. They are recovering, but very slowly.

In the whaling era, whalers named them the “right” whale to kill, because they’re slow swimmers and, because of the bulk of their blubber, float when dead.

They were also the preferred species because each whale provided huge amounts of valuable products – particularly oil for lights and lubrication.

The southern right whale is a single species (Eubalaena australis) found throughout the entire southern region of the Southern Hemisphere.

Commercial whaling began in the early 1800s, almost taking out the entire southern right population between 1835 and 1845. Even when the industry collapsed, it took another 90 years before official protection was provided.

There are now an estimated 12,000 southern right whales, but only 300 E glacialis and 450 E japonica remain. These are the rarest whales on Earth.

All right whales are identified by their colossal heads, which account for up to a third of their body length.

They are easily distinguished because they have no dorsal fin, broad pectoral fins, a long arching mouth that begins above the eye, and small rough patches of skin (callosities) on their heads.

They have dark grey or black skin, sometimes with white patches on their bellies. Their two separate blowholes produce a distinguishing V-shaped blow.

Right whales use a comb-like strainer of baleen plates and bristles to ensnare tiny morsels of food as they feed.

Like other whales, southern rights migrate twice a year. The feeding migration in December is to the krill-rich region near the Antarctic Convergence, and the reproductive migration in June is towards coastal temperate waters that provide a calm refuge for newborns.

The two main havens are the Valdés Peninsula in Argentina and South Africa’s west coast. They have well-defined areas for their autumn and summer migrations, on which they travel thousands of miles. They are also often spotted in Australia and New Zealand, and some very small groups can occasionally be seen along the coasts of Brazil, Mozambique, and Madagascar.

While it might seem as if wildlife professional photographers always manage to get that “lucky shot”, our trade secret is that what looks like luck is actually a combination of optimal timing, perfectly planned encounters and shooting at the best locations.

Behind each successful picture are a thousand unseen frames of failures. When I next tried to capture southern right whales under water two years later, it was clear that I needed to select either Argentina with its 2000 animals or the South African whale territories, which extend from Doringbaai, south of Cape Town, all the way east along as far north as Durban and are visited by up to 4000 whales a year – 30% of the entire population. My choice was a no-brainer!

To increase our chances of good pictures, I organised two groups of shooters with Rainer for 16 days out at sea. And to escape the sewage-polluted water of Cape Town, we opted to operate from the quaint little seaside town of Hermanus in Walker Bay, promoted as the whale-watching capital of the world!

The sheltered breeding ground hosts hundreds of these majestic animals, which spend up to five months a year there. I read that even from shore we could watch them courting and nursing newborn calves. In my simple mind, and with so many elements on our side, what could go possibly go wrong?

WITH THE FIRST GROUP, we arrived in Hermanus on mid-August to find wind ripping whitecaps over the face of the ocean, but were enthused to see from our hotel apartment balcony that whales were frolicking in the choppy sea.

We had eight days, so surely we would be able to get out to play among them? 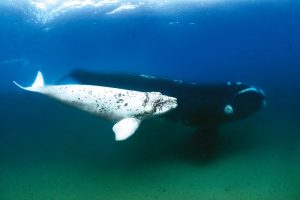 On day one the wind was still howling, so we spent it shooting African penguins. Day two, the wind subsided. We launched and quickly found whales all around us in the adjacent bay.

As soon as Rainer positioned us in the path of five southern rights, we gently slipped into the water in anticipation of capturing a perfect picture of a mother, calf, auntie, uncle and perhaps her new suitor as well!

Déjà vu. We were back in May 2015 with the dark-green water of Cape Town, though without the stench of the local toilets. However, we all saw the whales, or rather small parts of each whale.

In the following days we did find clean blue water, but without whales. Southern rights obviously prefer to romp in calm coastal waters, with no thought of satisfying the desires of ambitious photographers.

Three days later the wind picked up and we took our grief up the mountain, drowning our sorrows through the 100 or so wineries surrounding Hermanus.

Rubbing salt into the wound, Michael Valos, a fellow-photographer from our first attempt in 2015, was posting almost perfect pictures of southern rights, mother and calf, as well as mating whales, in reasonably clear water from Puerto Madryn, off the Valdés Peninsula.

For once, I was dumbstruck. Once again: right time, wrong place. What else could possibly go wrong?

THE SECOND GROUP arrived on 24 August to be greeted by the biggest sea ever to hit the picture-postcard coast of Hermanus. The sea clashed violently against rocky shores, churning up a dreadful sewage-like froth. It lasted for three days, and on the fourth we launched in calmer seas and found whales easily, albeit in darker, murkier waters than before.

Rainer claimed a win, as everyone got to see the southern rights under water. A few of us did return with marginally acceptable photographs – just.

Though whaling is of a long-gone era, the southern right – in fact all baleen whales – has drawn the short straw… a plastic one. Baleen whales are among the largest animals on Earth, 12-13m giants feeding on some of the smallest creatures in the ocean. By filtering water through their numerous long baleen plates, they guzzle tons of plankton, including larval crustaceans and copepods.

As they swallow these microscopic critters, they gulp up tons of plastic debris. Researchers believe that there are more than 5.25 trillion such pieces in the ocean. More than four billion plastic microfibres per square km could be trapped in open seas – death by plastics!

The southern right whales on the Valdés Peninsula have suffered the largest mortality event ever recorded for the species. At least 605 whales have died along the Argentine coast since 2003, including 538 newborn calves. The worst year was 2012, with 116 whale deaths, 113 of them calves. This means that a decade from now we’ll see a significant reduction in the number of calves born.

Discussing existing evidence, experts from around the world conclude that the three most likely causes of mortality are malnutrition, infectious disease and biotoxins from plastic.

Toxic chemicals tend to accumulate in fatty tissues, and because whale milk is one of the highest-fat substances on the planet, mother whales inadvertently wind up nursing their babies to death with contaminated milk.

Plastic pollution is one of the greatest threats to these whales, and to our ocean eco-systems. It is strangling and choking animals and changing the chemistry of the ocean, poisoning all marine life.

To save whales like the southern rights, we must reduce the use of plastic in every aspect of our lives, especially single-use plastics, and recycle more.

Meanwhile, my tale has yet to end; I am not done with the southern right whales yet. Learn more from the videos at goo.gl/wzijV3 and goo.gl/9HLFDA