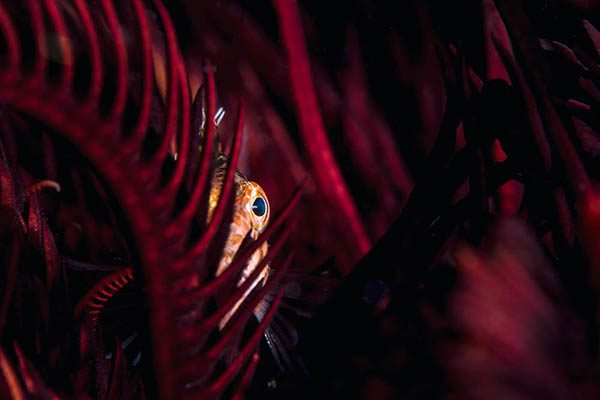 HEAVEN IS A GOOD house-reef, and here in Zamboanguita I have reached diving nirvana. Just steps from our room is the dive-centre where expert guide Nadi awaits. I gear up while studying the walls, which showcase images of the local marine life and whet my appetite for the dive ahead.
A brief stroll to the beach and we walk out onto the dive-site. Dark volcanic sand stretches beneath us, and the hunt for macro-critters begins.
Within the first minute I spot a giant frogfish, but Nadi promptly goes one better and points out a button-sized juvenile painted frogfish.
Looking through the magnifying lens, I admire its vibrant orange hues and ridged back. As it shuffles over the seabed in search of a microscopic snack, it looks like a cross between a dinosaur and an alien camel.
After a few moments we leave the frogfish in peace and venture down the sandy slope. Artificial reef structures and a small van have been sunk and quickly colonised in this seemingly barren landscape.
More fish are feeding here, and a large map pufferfish catches the eye. This species is one of the largest puffers and, as a relatively poor swimmer, it has the famous self-defence mechanism of inflating by gulping in water when stressed.
It’s a beautiful but sheepish fish which, until now, has always been camera-shy in my presence. I stalk the puffer and try a gentle approach.
The fish remains blasé about my presence and I inch further forward . The puffer has either understood that there is no threat, or is too consumed by hunger to pay heed to my bubbly presence.
I’m inches away now, and starting to wish I had fitted a wide-angle lens. Up close, the intricate map patterning of this voluptuous fish is even more striking, and between bites it looks straight at the camera for a frame-filling portrait.

TIME FLIES BY, AND I curse the limitations of decompression tables and diving cylinders. I start wishing that evolution could just hurry up and give us all gills, like Kevin Costner’s mutated character in Waterworld.
Diminishing air supply pushes us back up the slope, but we continue to scour the bottom for life. A small anemone stands out as an oasis in this sea of sand, and the resident anemonefish are the obvious attraction, but on closer inspection we also find porcelain crabs and anemone shrimps.
The shrimps ride the carpet anemone, rejoicing in the protection it brings, all while advertising their cleaning services. One individual in particular stands out, gracefully bouncing to and fro as it proudly bears an abdomen full of eggs, visible through its translucent body.
Zamboanguita is situated on Negros island in the Philippines. Dumaguete City is the main access point, either via the domestic airport or by ferry from nearby Cebu island.
Most divers come here to visit an area commonly known as Dauin. About 20 minutes from Dumaguete, Dauin has a coastline peppered with dive-resorts, and claims to offer the best macro diving in the Visayas region of the Philippines.
Venture a little further south and you’ll arrive in Zamboanguita, less developed but still blessed with world-class macro-diving along its shore. We’re staying at Thalatta Resort, founded by Frenchman Patrick Hascoet 10 years ago and a perfect base for an intensive week of diving.
Relatively unknown to UK divers and mostly populated by guests who have a fairly relaxed “one-a-day” diving habit, the result is a house reef and dive-boat without much of a crowd.
A private dive-guide doesn’t cost too much out there, and is well worth the investment for a completely bespoke experience, particularly if you’re an underwater photographer.
Thalatta Resort has luscious gardens and a large pool for lounging away a surface interval. The food is good and, crucially, comes out of the kitchen fast, which means no sacrifice of dive-time!
While it’s a slightly longer trip from Dumaguete, the advantage is that you have faster access to Apo Island, which is located just across from Zamboanguita.

APO IS THE PLACE to get your reef-diving fix once the muck fever has subsided. A 20-minute boat-ride away, an array of wall-dives surround this small island outcrop.
The coral reef is in pleasingly good shape, constantly replenished by the fast movement of water around the island. There is, however, a concerning lack of sharks, and I suspect that the demands of the shark-finning industry have played a role.
On the plus side, banded sea krait are here in numbers and, although they spend most of their time on land, they must venture into the water to find food.
Their zebra-striped bodies are adapted for both environments, with a flap on the tail making them capable swimmers.
Without gills, they must occasionally come up for air and, during a surface-interval snorkel, I follow one snake as it comes up to breathe. They are highly venomous but do not display any signs of aggression towards divers. In fact, you can usually follow closely as they forage around the reef in search of sustenance.
Turtles are the star of the show in the waters off Apo Island, and while nothing in nature comes with a guarantee, the odds are that you’ll see one.
Green turtles in particular are thriving, following protective measures put in place more than 30 years ago.

CHAPEL IS THE DIVE-SITE just out from the small village on the island, and where we head for our first immersion. Dipping down in the warm, clear waters onto a shallow reef, I spy a green turtle resting on the nearest coral bommie. Tracking us with a sleepy eye, the flat-faced turtle lets us into its coral-reef sanctum for a closer look.
I’ve often wondered why they are called green turtles and it turns out that it’s due to the greenish coloration of their flesh, a useful fact to bandy about on your next dive trip.
Satisfied, we continue towards the drop-off, weaving our way through the coral-heads. Soon another turtle appears, its relaxed fin movements belying its surprising speed.
Turtle sightings are always a treat but after a few I start to get greedy, and look for those with the most attractive shell.
As if reading my mind, another turtle passes below, showing off a pristine brown carapace, divided into symmetrical plates and splayed with yellow, a reminder that no artist can outdo Mother Nature.
For the second dive we head to Coconut Point, a drift-dive on which, because the image opportunities are so fleeting that it can become frustrating, the best bet is to get your settings dialled in and hope that you can drift onto some unsuspecting marine-life.
On this occasion, it turns out to be several banded sea-snakes, gyrating in the current and coming within inches of my dome port as we breeze by.

THE NEXT DAY WE SET OFF in the local bangka-style dive-boat, a kind of rustic trimaran, to explore some of the sites on the Dauin shoreline.
Prior to the trip, I’d invested in a garishly colourful and sparkly iPhone case, and the idea is to experiment with it as a backdrop in photos.
It’s a brilliantly sunny day, and we soak up the rays on the half-hour boat-trip to the site. Operation Sunbathe is so successful that by the time we’ve donned our gear and strode in, even the warm 28° water seems momentarily chilly.
The dive-site, named Cars for the artificial reef sunk there, shares the same topography as we had found in Zamboanguita. It’s an expanse of dark sand, gently sloping into the deep with only the occasional seapen or anemone to break it up.
The first time I saw a muck landscape it came as a bit of a shock, but I’m now fully converted to this type of diving and am filled with excitement at underwater treasures to be discovered.
We slowly frog-kick our way over the sand, scouring both directly beneath us and into the distance.
A black featherstar looms on the horizon and, as we approach, it appears that one of its arms has detached and is bobbing about independently.
Closer inspection shows this to be an ornate ghost pipefish, expertly camouflaged and swimming vertically to fool any would-be predators. I pass Nadi the iPhone case and line up a few shots, the inky profile of the pipefish now framed by a shimmering backdrop.
Once the pipefish grows tired of our sparkly shenanigans, we move on in search of a new subject.
Nadi starts to point excitedly at a small leaf growing from the sand, and I smile knowing that it can only be that most fashionable of underwater macro finds, the “Shaun the Sheep” nudibranch!
You’ll probably have seen these fellows posted on Facebook, intricately designed with one of the best underwater haircuts of all time, but nothing quite prepares you for how small they are in person. About the size of a grain of rice, it’s only through the viewfinder that it’s beauty becomes apparent.
Shaun seems quite happy to model, and we test out the iPhone backdrop once again, ending up with a shot of the nudibranch against a disco-style background. A fun exercise to mix things up, but far less satisfying than finding a beautiful, natural background for a charismatic subject!

BEFORE WE KNOW IT the last day of diving dawns, and when that happens there is nowhere I’d rather be than on the house-reef. Our visit coincides with a particularly fertile period for the local cardinalfish, with many of them bearing eggs.
The intriguing thing about cardinalfish is that, once fertilised, they mouth-brood their eggs, harbouring them for around a week until hatching.
As with seahorses and jawfish, it’s up to the male to carry the eggs, so any time you’re diving and see a cardinalfish with its mouth slightly agape, it could well be an exhausted father-to-be!
Once the first challenge of spotting a cardinalfish with eggs is accomplished, the second lies in keeping track of it, as it zigzags erratically among its identical-looking peers.
Ultimately, I have my eyes peeled for the moment when the pregnant fish opens wide in order to shuffle its eggs, a process that happens in the blink of an eye. I feel as if I’m playing some sort of bizarro video game as I track the cardinalfish through the camera and try to time the shutter-release with its momentary egg-shuffle.
Many failed attempts later, the plan finally comes together and a feeling of elation sweeps over me.
Underwater photography is so often a testing enterprise, but when the right moment, subject, and location all come together, it can really transport you to a higher plane.