It isn’t only the threats to coral reefs that scuba divers have to worry about – now it’s shallow seagrass habitats, popular for hosting species ranging from seahorses to dugongs, that are causing scientists concern. 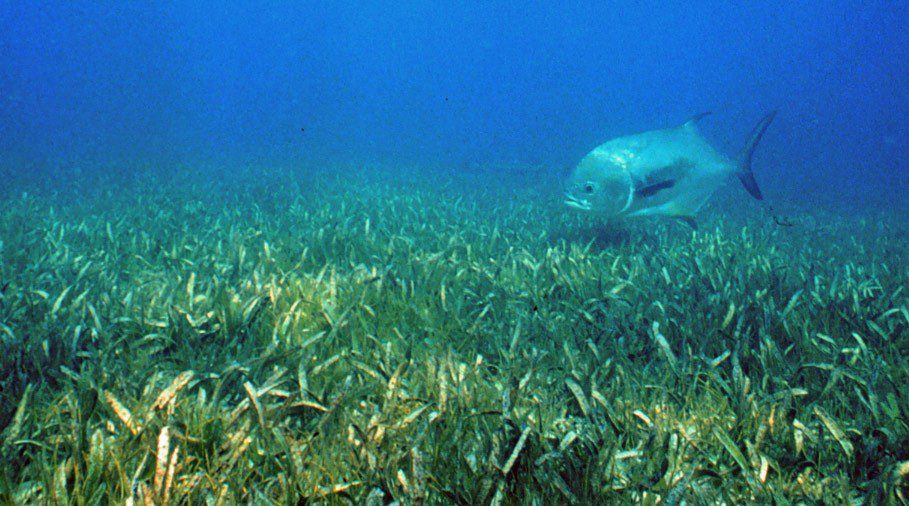 First, a new study reports that a marine heatwave off Western Australia eight years ago resulted in a double-whammy as it released millions of tonnes of trapped carbon while devastating the world’s biggest collection of seagrass meadows at Shark Bay.

The release was equivalent to more than a fifth of Australia’s recorded greenhouse-gas emissions.

Seagrass collects carbon from seawater and buries it safely beneath the surface, where it can remain for thousands of years, but ocean-warming can kill the seagrass, causing vast amounts of carbon dioxide to escape into the atmosphere as the plants decompose and oxygen penetrates the sediment.

Over the past century it’s reckoned that almost a third of seagrass has been destroyed around the world, mainly through human disturbance.

An international team of scientists found that 22% of the Shark Bay seagrass had been destroyed by the 2010/11 heatwave and 2-9 million tonnes of CO2 released in the following three years alone. With the slow recovery rate of seagrass, 21m tonnes was likely to have been released by 2050.

The scientists have proposed transplanting seedlings to the habitat to limit the damage, even using tougher non-native species if necessary. Their findings are published in Nature Climate Change.

Closer to home, nitrogen from human and livestock waste released into coastal waters is damaging UK seagrass meadows, according to joint Cardiff and Swansea University research published in Frontiers in Plant Science.

The pollution gives rise to algal blooms that block out the light that enables seagrass to grow.

In the UK seagrass can grow no deeper than about 7m because of limited light penetration, whereas in the clearer Pacific the same species can grow five times deeper than that.

The researchers measured nitrogen accumulated in seagrass leaves collected from a maximum depth of 3m at 11 UK habitats, all but one of which were European marine protected sites.

They found that levels were 75% higher than those measured elsewhere in the world, particularly in denser areas of human habitation – seagrass from Southend held around three times as much of the isotope nitrogen-15 as that recorded at a Scilly Isles site.

Lead author Benjamin Jones told the BBC that seagrass, which grows in sandy and muddy areas around the UK, was 35 times more efficient at capturing carbon than a tropical rainforest, and prevented coastal erosion by stabilising sediment.

It also provided “a nursery habitat for a diverse range of marine life, which includes cod, plaice, pollack and, in places on the South Coast like Studland Bay, seahorses”.

The researchers have launched a citizen-science project and want people to download the Seagrass Spotter app from Project Seagrass and contribute to their database.