Jack Jackson, the underwater photographer and author of many best-selling diving books, has died at the age of 79. He had been seriously unwell since 2007. 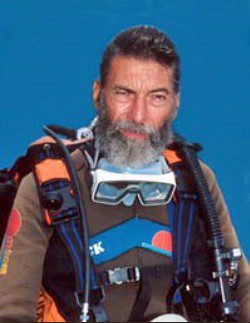 Jackson started his working life as an industrial chemist working in the oil and photographic-film industries, but in 1967 gave up this career to pursue a love of mountaineering, specialising in the Himalayas and working as a professional photographer, expedition-leader and lecturer.

By the early 1970s Jackson was diving and had taken up underwater photography. For 12 years from 1975 he spent more than half of each year running a dive-centre and boat from the southern Red Sea port of Sanganeb in Sudan.

As his books took off, he travelled widely, often in remote parts of Asia and Africa, leading expeditions and gathering material.

Apart from his books and articles, covering other adventure sports such as trekking and kayaking as well as diving, Jackson’s photographic work was in demand in the advertising world.

Known particularly for his shark photography, he led underwater photo-workshops in the Red Sea and Andaman Sea, and Nikon mounted an exhibition of his work in 1989, which was followed by other shows.

He was only the second diver to achieve an underwater nature photography fellowship of the Royal Photographic Society and served on several of its panels. He was also a Fellow of the Royal Geographical Society.

Diving books written or edited by Jackson and found on many divers’ bookshelves include two diving manuals, Dive Atlas of the World, Diving with Sharks, Diving the World’s Coral Reefs, Diving with Giants, Top Wreck Dives of the World, other dive-site compilations and guides to Malaysia and the Philippines, which he described as his favourite destination.

His Top Dive Sites of The World was voted best publication by readers in the Diver Awards of 1997.

Jackson’s funeral was in Woking in Surrey on 21 March. He leaves his wife Babs, with whom he shared many of his diving and other adventures.