In 1927 the Christiaan Huygens became the largest passenger ship ever built in the Netherlands. Furnished by famed designer Lion Cachet, she was finished in expensive materials such as marble and mahogany but, badly damaged by a mine at the end of WW2, she became a total loss. VIC VERLINDEN and STEFAN PANIS tell the story in this compelling chapter from their new book Diving For Treasure… 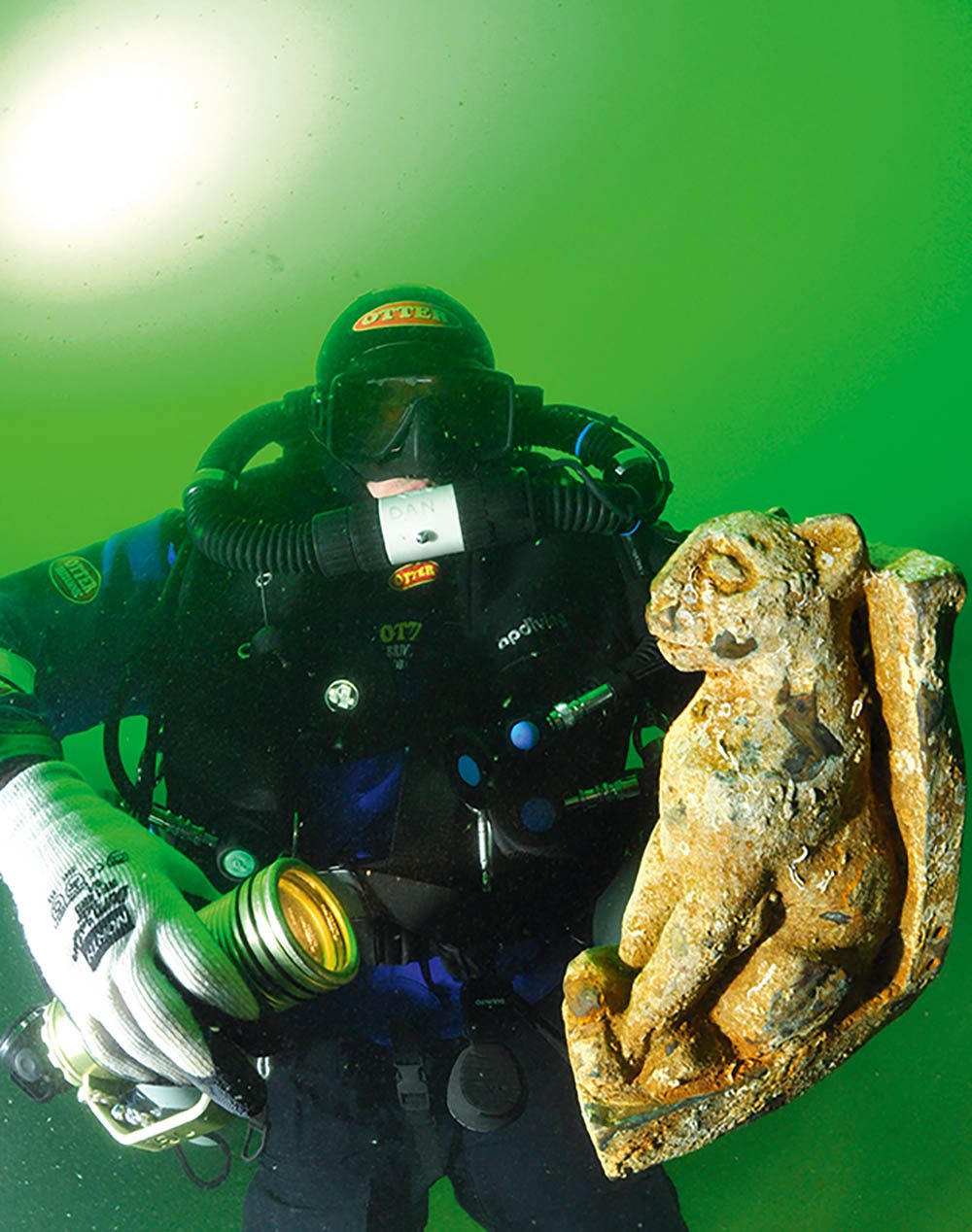 On 25 August the ms Christiaan Huygens left the port of Antwerp destined for Rotterdam. The weather was good, with just a light breeze of Beaufort force 3. Shortly into the voyage the pilot was exchanged off Terneuzen.

At 20:49 Captain Bakker gave the order to drop anchor for the ship to spend the night in the vicinity of buoy No 3. On Sunday morning at around 6am the anchor was raised and the captain ordered the voyage resumed.

When the ms Huygens passed the wreck buoy of the Empire Blessing at 7.56 the officer of the watch reported in the deck logbook that all was in order.

However, a few hours later, at 11.30, a large explosion, caused by a mine, took place. Immediately, all engines were stopped and the captain ordered an emergency distress message to be sent. The lifeboats were made ready to offload the passengers, several of whom were wounded by the explosion.

The captain signalled the tugboat Arthur to come alongside as soon as possible – while all the time, water rushed into the cargo holds.

At 3.30pm Captain Bakker held a meeting with his senior officers, and it was decided to beach the ship on a sandbank four miles away so that it could be salvaged at a later time. It was taken in tow towards the sandbank and beached.

In the following days several attempts were made to save the ship, but unfortunately a heavy storm came through and broke it in two. On 3 September it was written off as a total loss.

Attempts were made to save as much as possible from the ship: the compasses, telegraphs, radio equipment and binoculars. Even the table silver that could be reached was saved from perishing. Throughout the years the ship sank deeper and deeper in the North Sea and was finally lost into oblivion.

A DIVE INTO THE UNKNOWN

When I made my first dive on the wreck of the Christiaan Huygens on 29 May, 1991, I could not have imagined that this wreck would still keep me captivated many years later. 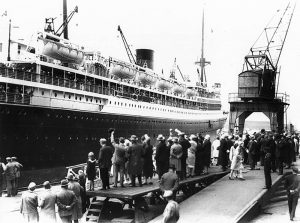 Passengers give scale to the massive ship.

However, the first dive was not a success. We had no GPS navigation systems, and it was a challenge to find the wreck with just a compass and a map.

However, we got lucky when we followed several buoys as a small day fishing-boat was anchored on the wreck. Quickly, we threw the anchor and prepared ourselves to explore.

While descending along the shotline I could feel a very strong current and the visibility was reduced to nil. I decided to detach the anchor and we called it a day.

We did not give up, however, and we returned to the wreck many times that season. We found the visibility under water better on some days than others, and we slowly got to know the wreck.

During the season of 1992 we again dived on the wreck regularly. One day in July, at a depth of 20m, my curiosity was triggered by a bronze ring sticking out of the sand.

Using my dive knife to clear it away, a figure featuring three naked women appeared. As I dug deeper, a beautiful bronze statue became visible.

Back on the boat, the find was studied and we figured it was most likely a lamp foot. I had left my reel next to my find, and shortly afterwards my buddy found a statue of a cat close by. Several weeks later, we also found a statue of an owl.

Other objects such as silver dishes and porcelain were also found at different spots. In the following years I made many dives at the site, even though I prioritised other wrecks.

RESEARCH IN THE ARCHIVE

In 1999 I had a bit more time on my hands, so after a tip-off I started researching in the National Archives in The Hague.

Here I found a booklet with pictures of the various compartments of the ship and a description of the interior.

This document identified the bronze statues that were used in the first-class dining hall; they were easily recognisable as the ones we had found.

The bronze statue with the three naked ladies was placed on an ebony side-table along the wall, and there was also a second statue. In between the statues, a tapestry hung with a representation of Paris in the time of Christiaan Huygens [a 17th-century Dutch physicist]. The statues were made by the famous Dutch sculptor Lambertus Zijl on the orders of the ship’s interior designer Lion Cachet. 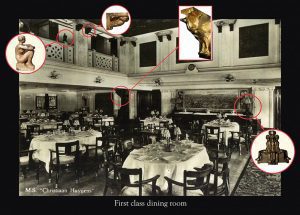 The spacious interior of the first-class dining-room, with the original positions of some of the finds shown.

The interior decoration and sculptures were designed in the contemporary art deco style. This art-form originated in Paris during the early 1920s and was distinguished by the clean lines in the design.

In a different archive I even found the original order form for the casting of the statues at the Belgian foundry Fonderie Nationales des Bronzes. They cost what was then the astronomical price of 990 Belgian francs each.

The form mentioned that a disagreement occurred between Cachet and the original clients because the statues portrayed naked ladies, but they were already cast and were eventually placed on the ship anyway.

From the pictures it was clear that many more bronze statues were to be found on the wreck.

In other compartments, such as the first-class music room, there was a description of five bronze panels that depicted five different Dutch heroes and scientists: Huygens, Michiel de Ruyter, Maarten Tromp, Prins Maurits and Hugo de Groot. The door panels were decorated with inlaid tin and depicted the planet Saturn. The smoking room was also finished with bronze panels, and had a marble bust of Huygens.

It was very difficult to find precisely where the statues would be on the wreck, but after many dives and studies of the plans I could focus on an area that must have been the first-class dining hall.

A recurring problem was dropping the anchor as close as possible to the site of the statues; on a wreck 170m long, this was not an easy task. However, a lot of practice meant that we became much better at interpreting the sonar images, thus solving the problem.

For weeks the site was combed centimetre by centimetre, and finally on 27 July I was successful and found a bronze owl and a cat between two beams. On the following three days I found three other statues in the same location.

Several years later I found one of the bronze panels that had served as decoration of the support beams in the first-class dining hall. Since then other divers have also found statues in the wreck.

In 15 years I have logged more than 200 dives on the wreck. The visibility can vary from just a few centimetres to 8m, but usually it is not that good, because the ship is positioned on a sandbank; this is also the main reason it is difficult to find your way around.

During neap tides long dives can be made on the wreck; however, during spring tide the water barely comes to a standstill, and there are very strong currents. The depth of the wreck is between 8 and 25m at the bow. She has been ripped apart by waves and current, but it is still possible to enter some areas with the use of a reel.

The engines are still clearly recognisable and now form the tallest points on the wreck. There is a cannon at the stern, and at the bow there is another, beautiful one on a pedestal.

Close to this area is an ammunition room, which is still stocked with grenades. (The ship sailed as a troop transport during the war.) The cranes that were placed at various locations on the ship to take on cargo have fallen beside the wreck and make a great orientation point to start your exploration.

The wreck is also a great hide-out for numerous crabs and lobsters that reside in the scrap. Large schools of sea-bass call it home as well, but go into hiding as soon as divers arrive.

When I made my first wreck-dive of the year this season the visibility was barely 20cm. This made exploration a dangerous undertaking, and a certain amount of caution was necessary.

However, the ms Christiaan Huygens is a fantastic wreck to explore, and I am sure it will offer up many more of its secrets in the coming years. 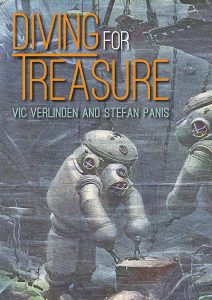 The illustrations used in this extract from the new book Diving for Treasure are just a selection – this chapter alone has 48!

The book carries accounts of 17 wrecks, many of which lie in North Sea and Channel waters. While they didn’t all carry gold, silver, coins or gems, they all contained the sort of treasurable artefacts that divers love to find.

This is not just a maritime history book, because DIVER contributor Vic Verlinden and soon-to-be contributor Stefan Panis, both from Belgium, have dived these wrecks, including some, like the Egypt, that lie as deep as 130m, and uncovered treasures.

These highly experienced technical divers have been able to add their own photography into the mix and, through first-hand accounts, convey the considerable challenges of diving these vessels.