The concept of failure points is frequently discussed in the technical-diving world but often neglected in the mainstream, says SIMON PRIDMORE, who reckons it is highly relevant to every form and level of scuba diving. 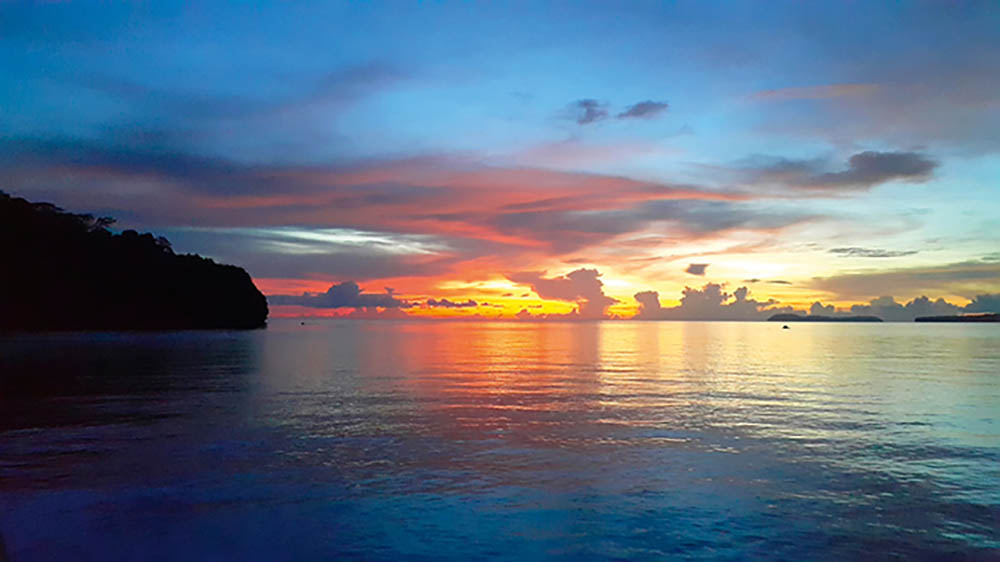 Manuk island in the Banda Sea.

AN INCIDENT THAT OCCURRED during a recent liveaboard trip illustrates the concept of failure points nicely. The group of divers in this story were diving off the rock island of Manuk in Indonesia’s Banda Sea. Their primary object was to look for hammerhead sharks out in the blue off a deep reef wall.

IT ALL CAME APART

Ian back-rolled from the tender into the water and started to descend. He dropped fast to 20m, at which point he reached for his inflator to inject some air into his wing and put the brakes on, so to speak. 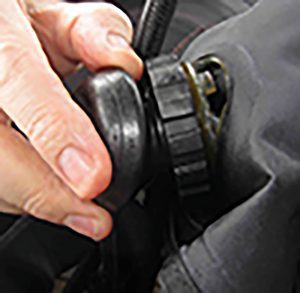 Worn casing around a BC shoulder dump-valve.

However, when he pressed the inflator-button, all he did was inject a stream of compressed air directly into the ocean.

He looked down and, to his great surprise, saw that his inflator mechanism was connected only to the low-pressure inflator hose. The corrugated BC hose was nowhere to be found.

Ian continued to drop. He tried finning up to arrest his descent but all that did was slow him down. He was still descending with no means of correcting his negative buoyancy. He was using a harness and wing BC with a 7kg stainless-steel backplate, so had no weights to ditch.

He looked around for his diving companions who, luckily, were close by. They had seen him in difficulty and swam down to help.

One held onto Ian and inflated her BC a little to stop them both sinking further. The other retrieved Ian’s corrugated inflator hose from where it had floated away behind his back, and reattached it to his inflator assembly.

There was nothing to secure it there, but Ian was able to hold it in place with finger and thumb while he pushed the inflator button gingerly and managed to get some air into his air-cell to make himself neutrally buoyant.

He felt shaken and signalled that he wanted to go up, so they all aborted the dive together. They didn’t see any hammerheads.

Ian had chosen this particular BC system because he didn’t like wearing a weightbelt or weight-pockets. He always worried that a belt might slip over his belly and fall off, or that the buckle might fail. Wearing weight on a belt also pushed his legs down when he swam horizontally, and he found it difficult to get good trim. So he had come up with the solution of using a heavy backplate instead of weights. 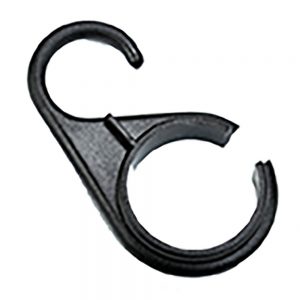 Ian was lucky that he had a capable dive-team with him when the incident took place. In moving his weight around, he had cured a couple of relatively minor problems but had created a major new one. He now had no weight that he could dump if his BC failed.

All BCs have multiple failure points. The wing can tear, dump-valves can shear off, inflators can fail and, as in this case, cable-ties can break. Ian never considered that his BC might fail on a dive, and what he would do if it did.

Nor had he looked at the system with which he was diving and identified the failure points. His corrugated hose was connected to the BC pump mechanism by a single cable-tie, and to the shoulder dump-valve by another single cable-tie. There was no clip, Velcro wrap or length of shock-cord keeping the corrugated hose and the inflator-hose together.

The cable-tie on the pump end of the corrugated hose had either split when Ian entered the water or it might have broken earlier without him noticing.

Certainly it was gone when the gear was examined post-dive. 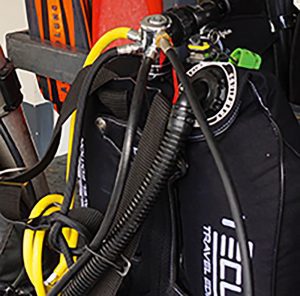 Ian confirmed that he had never even thought about why he should have something connecting the two hoses. Without anything holding it in place, the corrugated hose came off the pump and drifted away behind his back, where it was out of his reach.

Most BC systems have double cable-ties at each end of the corrugated hose or a permanent heavy-duty screw-fitting. They also have some sort of bridging or wrapping device connecting the corrugated and inflator-hoses, precisely so that what happened to Ian cannot occur.

You might not even have noticed these features. Good equipment manufacturers have the concept of failure points in mind, even if divers do not.

FINS AREN’T ALWAYS WHAT THEY SEEM

You will have noticed that I specified good manufacturers. There are some brands on the market from manufacturers that do not think their designs through completely in terms of failure points. 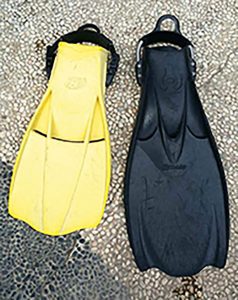 Two fins, one with a steel strap fit for purpose, the other just cosmetic.

An example of this can be found in the recent fashion for stainless-steel fin-straps, an idea that originally came from the world of cave-diving.

The thinking behind using coiled metal straps bolted into the body of the fin is primarily to remove the failure points represented by flimsy plastic buckles, making it less likely that you will lose a fin on a dive.

A side-benefit for cave-divers is that there are no flapping bits of rubber on the ends of their feet that might get tangled in a guideline. However, if you look closely at many of the models produced by manufacturers that have jumped onto this bandwagon, you will see that they have coiled stainless-steel straps, but the straps are attached to the fin by plastic buckles.

They look similar to the real thing, but the failure-points that the metal-straps concept was designed to remove are still there. The change is purely cosmetic. 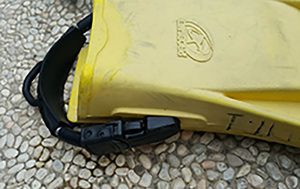 What can you do? There are potential failure points in every piece of gear with which you dive. Recognise that they are there, eliminate them when you can and, where you can’t eliminate them, ensure that you have a plan for what to do when the failure happens – a plan that works, and one that you have tested in a pool or shallow water.

When you’re planning to buy equipment, compare options with the concept of failure points in mind. Although, as I mentioned earlier, all BCs have multiple potential failure points, some have more than others.

Some have an internal air-cell to keep the wing functional if the external casing is torn, or the material around the dump-valves gets worn. Some have double cylinder-straps to ensure that the cylinder never falls through.

You must also assume that a cable-tie anywhere on your gear will fail at some point, usually at the worst possible time, and double it up.

As technical-diving pioneer Billy Deans used to say: “Two is one and one is none.” 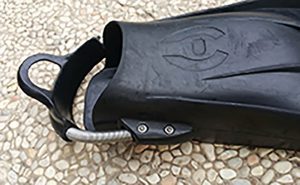 Here the steel strap is bolted into the fin body.

Either that or, in the case of a regulator-mouthpiece cable-tie for instance, prepare for it to break, and know what to do when it does.