The Great Barrier Reef and Ningaloo get the headlines, but Aussie diver NIGEL MARSH reckons the real underwater Australia lies much further south 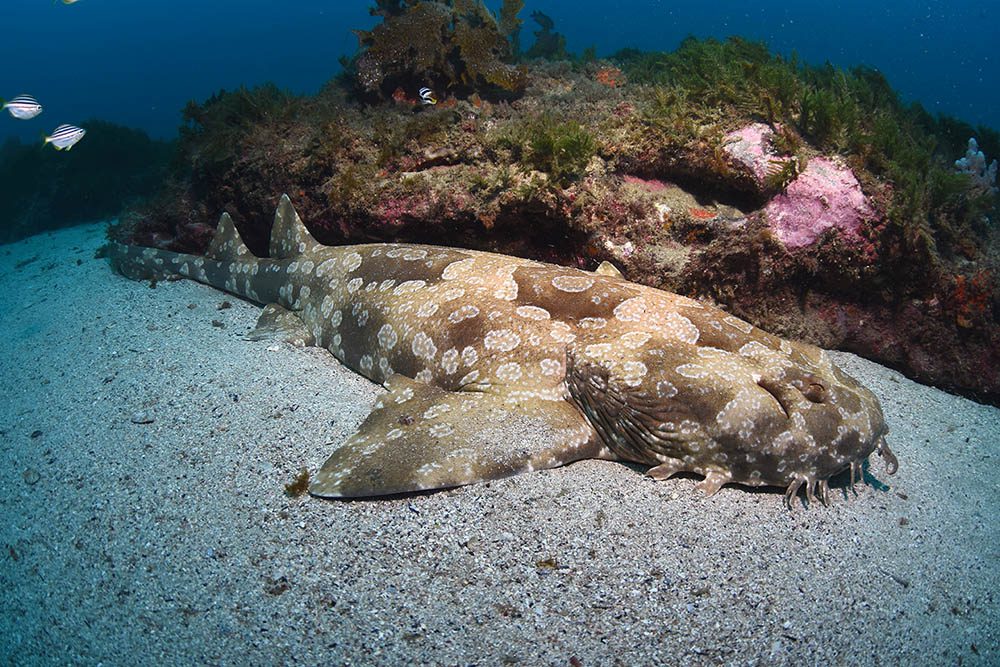 A large population of spotted wobbegongs resides at the Nursery.

I HAD BEEN IN THE WATER only for a few minutes before I was joined by the local bully demanding a handout. It was an eastern blue groper, a very large species of wrasse and also a very over-friendly one.

The curious fish was swimming around me, peering into my mask and basically being a pest. I knew that if I didn’t feed the fish it would refuse to leave me alone, so I flipped a nearby sea urchin to keep it occupied.

Gropers have very thick lips, designed to smash urchin shells and spines. In two quick bangs with its lips it had the urchin open and was sucking out the tender flesh.

Now satisfied, the blue groper left me in peace to explore this lovely rocky reef on the south coast of New South Wales.

I grew up in Sydney and spent many childhood holidays on this coastline, which stretches from Sydney south to the Victorian border – more than 300 miles of pretty beaches, beautiful bays and rocky headlands.

After I learnt to dive, this stretch of coast became a favourite weekend destination, its temperate waters home to an amazing variety of endemic species.

And even after I moved to Brisbane in 1990, 600 miles north of this region, I still drive down the coast to explore the area whenever I can.

My last southern sojourn in June 2017 was one of the best.

Joining me on this trip was an old Sydney dive-buddy, Stuart Ireland, who now lives in Cairns and is one of Australia’s top underwater cameramen.

Our first challenge was to drive from Brisbane to Shellharhour, nearly 700 miles in one day. Shellharbour is 60 miles south of Sydney and

I used to dive this area, with its variety of shore- and boat-diving sites, on day-trips.

Arriving late at night, we checked into our hotel and crashed. The next morning we woke to blue skies and mild weather; Aussie winters are hard to take. 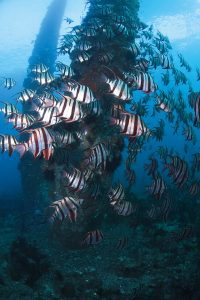 A school of old wives mill around the pylons at the Blue Metal Loader.

We had time for a quick dive, so drove to nearby Bass Point and the Blue Metal Loader.

This long jetty is always a great dive, especially when the seas are calm and blue. With barely a ripple on the surface, our entry and exit was easy over the rocks, and we were happy to find the visibility at around 15m.

We were quickly joined by the over-friendly eastern blue groper, the state fish of New South Wales. Every dive-site is home to a family of these cheeky fish, which follow divers around like puppies.

We explored the rocky reef and jetty in depths to 11m, and there was plenty to see among the rocks, kelp and seaweed, including nudibranchs, morays, leatherjackets, wrasse and a small reaper cuttlefish.

Usually this site is home to dozens of giant cuttlefish, but I could find only one.

We later learned from Shellharbour Scuba Centre that a small group of grey nurse sharks had taken up residence under the jetty over the previous months, and had only just moved on.

I suspect that they might have also enjoyed feasting on the giant cuttlefish.

The highlight of the dive was a vast school of old wives milling around the pylons.

Checking out of our motel, we jumped in the car and headed 220 miles further south. On the way we drove past many dive-sites I knew, off Ulladulla, Bateman’s Bay and Narooma.

I never usually bypass Narooma, because offshore from this town is Montague Island, always washed by clear water and home to a large colony of playful Australian fur seals.

But on this trip I wanted to dive an area I hadn’t visited for more than 20 years, a pretty holiday town close to the Victorian border called Merimbula.

Arriving late in the afternoon, we checked into the Merimbula Divers Lodge, the local dive-shop with cheap but comfortable bunk-style accommodation. We were here to explore a few of the local shore-diving sites, and in particular Merimbula Wharf.

The next morning the weather was a little cold and cloudy, but the water looked fantastic; flat and blue. We quickly geared up in the car park at the wharf, strolled across the rock platform and jumped into a shallow gutter.

While it’s possible to dive under the wharf, the main attraction at this site is the rocky reef. We quickly found ourselves in 14m, and with 20m visibility now we could really appreciate the rocky terrain, with lots of small ledges to explore and lovely sponge gardens.

Sponge gardens are a feature of the south coast, with colourful sponges, gorgonians, ascidians, sea tulips and bryozoans decorating each rock. A close examination between the sponges revealed nudibranchs, hermit crabs, shrimps, moray eels, octopuses and many attractive seastars.

We explored the rocky reef for a while, encountering a good range of southern reef fish and, naturally, several eastern blue gropers. We then headed out over the sand, as I was hoping to photograph an Australian angel shark. I had found a few of these elusive sharks off Merimbula Wharf on previous occasions, but had no luck that day.

We ended the dive under the wharf, which is only 2m deep, with two very large smooth sting rays swimming around us. These giant rays gather under the wharf to scavenge scraps from the anglers overhead.

OVER THE NEXT THREE DAYS we carried out six more dives at Merimbula Wharf, each time exploring a different area and seeing a host of different marine life. The angel shark continued to elude me, but I was just as happy to find a rare crested horn shark. 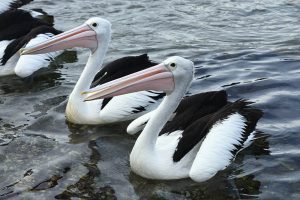 On other dives we encountered gurnard perch, a coffin ray (a type of electric ray), a giant cuttlefish, a blue-lined octopus, a banded wobbegong, a green turtle (very out of season) and a cowtail sting ray, 600 miles south of its normal range. But the highlight for me was a close encounter with a Melbourne skate, a rare species I had been hoping to see for 40 years.

While at Merimbula we did a morning trip to nearby Tathra, to dive the historic Tathra Wharf. With a small swell washing over the rocky shore, we decided against a shore entry and instead climbed the ladder to get in and out.

The only problem was that it was 8m above the waterline, hard work with heavy underwater camera housings. We managed and it was worth the effort, because the rocky reef at this site was sensational. Under the wharf were schools of yellowtail scad and old wives, but the best part of this dive was the adjacent rocky reef in depths to 14m.

AFTER THREE DAYS WE HAD BARELY scratched the surface of the diving in this area, but it was time to head north to our final destination, Jervis Bay.

This picturesque bay is located 120 miles south of Sydney and was once my favourite weekend getaway. It has the whitest sand beaches in Australia, and some impressive shore diving, but we were there to explore some of its boat-diving sites with Dive Jervis Bay.

The mouth of the bay is dominated by towering sea-cliffs, which continue under water to form walls, caves and swim-throughs. While the diving outside the bay is good, some of my favourite spots are just inside the heads.

These sites are shallower and protected from the swell, and as such abound with a great variety of marine life. A little wind provided a perfect excuse to dive one of these protected sites, the Nursery.

I hadn’t dived this site in more than 20 years, so it felt good to jump into the water and find the visibility to be more than 25m. We headed across the sand to a small rocky reef in 16m. It was covered in spotted wobbegongs – we must have seen more than a dozen.

While busy with the wobbies, we were suddenly bombarded by an Australian fur seal, which did a circuit around us and was gone.

It was an easy decision to revisit the site for our second dive. We saw many of the same animals, but also found a pair of male giant cuttlefish having a showdown over mating rites.

These two 1m-plus cephalopods were displaying waves of colour to each other and flattening their bodies to make themselves look bigger.

We couldn’t find the object of their affections, the female, which must have been hidden away under a ledge. Exploring other ledges we found a pineapplefish and another species unique to New South Wales, the eastern devilfish.

The next day the boat wasn’t running, so we did a couple of shore-dives at Murrays Beach. This is always interesting, with rocky reef, seagrass beds and sand-flats to explore. There were lots of reef fish to be seen, but the main feature of this site is the rays, with dozens of common stingarees, kapala stingarees and eastern fiddler rays to be seen.

Our final day of diving took the form of another double boat-dive trip, this time exploring two sites on the northern inner headland, the Docks and Outer Boat Harbour. The Docks is one of those magical dive-sites with which I never get bored, with walls, boulders, caves and sponge gardens to explore in depths to 20m.

June sees the start of the winter breeding season for Port Jackson sharks, and we were happy to see a dozen of these cute sharks lazing on the bottom, saving their strength for several months of mating.

EXPLORING THE CAVES, we found an eastern devilfish and a very large banded wobbegong. We also encountered two smooth sting rays, one lazing on the bottom and the other cruising around.

Outer Boat Harbour was new to me. It had been recommended as a good spot to see angel sharks, but once more they eluded me. We instead found a rocky reef covered by a pretty sponge garden and populated with a variety of reef fish and invertebrates. A thick school of trevally was the highlight of the dive, but we also saw a southern eagle ray and a grey nurse shark before we reluctantly surfaced.

We loaded the car for the long road trip back to Brisbane. We had seen some amazing endemic marine life and sponge gardens in fabulous visibility. I can’t keep away from the area!

GETTING THERE> Fly to Sydney and hire a car to explore the NSW south coast at your own pace. You need to arrange a visa before departure, immi.gov.au

WHEN TO GO> Any time, but winter (UK summer) offers the most stable weather. Water temperature varies from 22°C in summer to 14°C in winter. Visibility varies greatly but is generally 5-15m inshore, 10-30m-plus offshore.