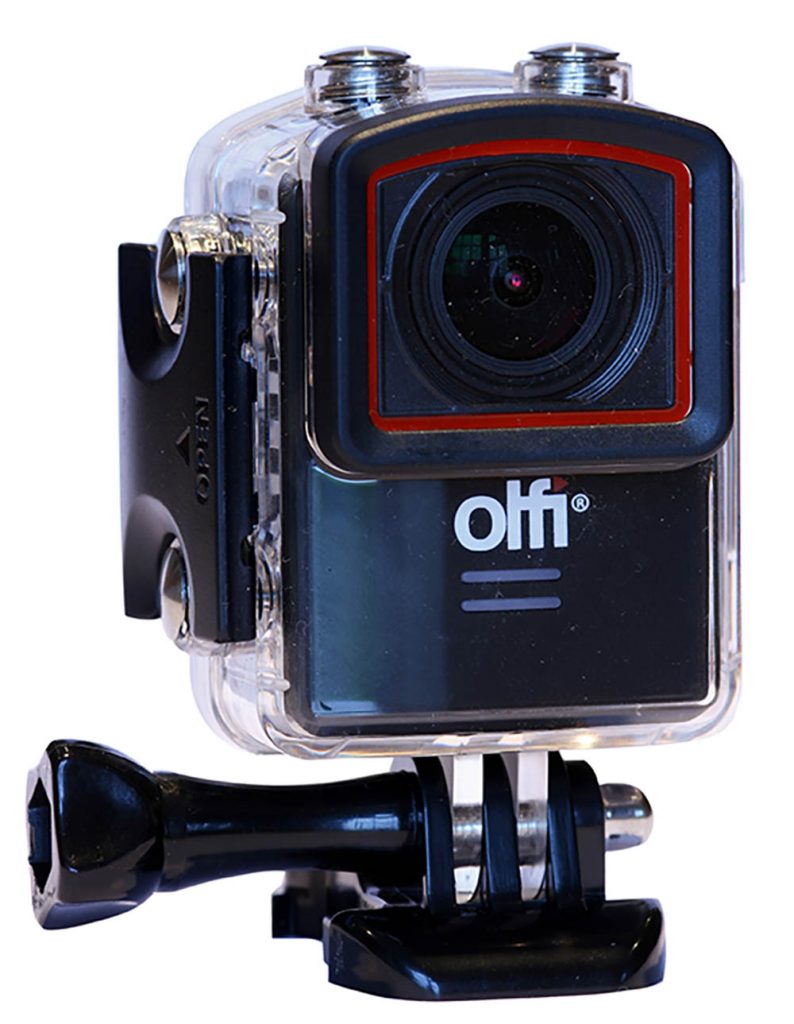 IT ALL STARTED WITH the original GoPro, a video camera the size and shape of a box of matches. Add a housing capable of diving to reasonable depths and suddenly everybody not only wanted one, they went out and bought one, seduced by the ease of use and compact size of the package.

The quality of the underwater video wasn’t great back then, but technology is improving at an exponential rate and the results achievable from action cameras today are remarkably good.

GoPro continues to dominate the market, but competitors such as the excellent Paralenz are keeping them honest and there’s now a whole raft of models available at lower prices.

But what can you expect if you spend less? Here are a couple of recently released £150 action cameras that can answer the question for you.

The OLFI One.Five seems small, even by action-camera standards, an impression reinforced by the upright form-factor. It comes in a smart zipped case with a 30m housing and a range of mounts, though there’s no mount with a threaded hole to attach to a standard camera tray. 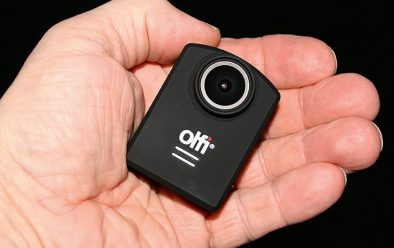 That’s a criticism common to many action cams, and shows that these gadgets are aimed less at traditional photo enthusiasts but more at people who do stuff and want to show off their exploits. Which is a good time to mention that OLFI uses the tagline “One Life, Film It”. Geddit?

The base of the housing has the common GoPro-style finger-mount moulded in, and the camera comes with various mount-bases with self-adhesive pads. Once I’d got over my nut-and-bolt issues, I found that the self-adhesive pads did a fine job of work.

The top front of the camera is where you’ll find the lens, for which OLFI claims a field of view of 170°. That’s corner to corner across the diagonal, of course, and the moment you take it under water the field of view is reduced by diffraction, but it’s still impressively wide-angle the first time you look at the small but perfectly usable rear screen to see what you’re filming. The screen itself is sharp, clear and also shows set-up information.

The OLFI’s headline party trick is 4K video at 24 frames per second, which is the cinematic standard, though that headline resolution is achieved by interpolating up a lower native resolution.

Leaving that aside, you also get 2.5K, 1440P and 1080 full HD at various frame-rates, plus assorted lower resolutions that I doubt will ever be used.

Complementing the resolution settings is an adjustable bit rate. The higher the bit rate the more data the camera records, and the higher the quality of the final video footage.

Tested alongside two other action cameras, all set to record 1080 full HD at 30 frames per second, the OLFI files were a good third larger.

The camera boasts a range of photographic controls, including settings for picture sharpness; colour saturation; exposure level in one-third of a stop increments; ISO; a High Dynamic Range mode and a choice of white-balance settings.

There’s a dedicated Underwater mode but no manual white-balance option, which is a shame, but you should be able to set up the camera to record the sort of footage you like, or the sort you can tweak in post-processing to deliver eye-popping results.

The camera uses four buttons to select the various options from clear, well-thought-out menus. The top-left button, as seen from the back of the camera, turns on the power with a long press and cycles through video, still picture and menu screens with a short press.

Yes, the OLFI does still pictures too, the back-lit Sony sensor delivering 16-million-pixel images. The button at top right starts and stops video recording, takes a snap or selects a menu option, and the buttons on the right allow you to scroll up and down through the sub-menus. It’s all very easy to work out, and if you’ve ever used a camera before, you’ll find yourself quite at home.

The housing is a good-quality piece of kit, small and perfectly formed. The buttons on the housing are well-weighted and positive in action, and the over-centre latch that holds the case closed snaps shut with the reassuring violence of Arkwright’s till. Trust me, it won’t come open unless you want it to open.

This is a more conventionally shaped camera, a bit larger than the OLFI. It comes in a box along with the usual selection of mounts and bases, all of the self-adhesive persuasion except for one that would allow you to attach your new camera to the handlebars of your bicycle, or anything else that’s tubular and not too large in diameter. 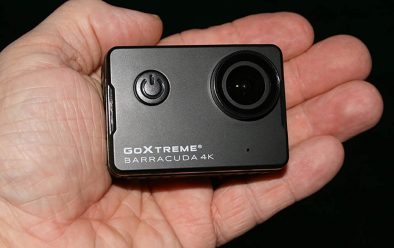 I know you won’t be taking your bike diving, but it does point up that all of these action cams are developed for above-water use, then tweaked for those who like the life aquatic.

What you won’t find in the standard package is a housing for use under water, because the GoXtreme Barracuda doesn’t need one. It’s fully sealed and can happily be plunged beneath 33ft of briny without fear of unpleasantness.

Of course, 10m isn’t a lot of depth, so a 30m housing is available as an additional purchase.

I really like this idea. Leaks are a fact of life for underwater photographers, and having a waterproof camera inside my no-longer watertight housing could have saved me three cameras over the years.

The lens is front left of the camera and has a claimed 170° field of view. Above water, I wouldn’t argue. A true fisheye should show 180° across the diagonal, but the GoXtreme lens is close enough not to lose sleep over. And yes, diffraction reduces the field of view under water, but the lens remains decently wide-angle.

Round the back you’ll find a decent built-in screen that you can use to compose and also read the various menu-settings.

Selecting the options is a doddle when the camera isn’t housed or wet. The rear screen is touch-sensitive and is quick and positive in use.

The screen itself is a reasonable size, and the information displayed on it is clear and easily interpreted. You won’t find yourself squinting at a tiny icon and wondering what exactly it means.

Other photographic controls include a number of white balance settings, though no manual white balance or Underwater mode, and an exposure over-ride of plus or minus two stops in full-stop increments.

Once in the housing the touch screen isn’t usable, so you’ll need to use the two buttons on the camera to make changes. 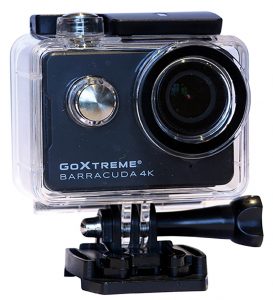 The power on/off button is on the front and a second button on the top right starts and stops recording or takes a picture.

When you’ve turned the camera on you use a combination of short presses on both buttons to scroll through the menus and confirm settings, but it’s not the easiest of jobs.

Better to get the camera set up before you hit the water, especially if you’re wearing gloves.

Which brings me to the housing – which was a bit disappointing. Not that it leaked. It was perfectly watertight and did that part of the job extremely well. It’s just that it seemed flimsy and in need of better quality control at the factory.

The camera drops easily into place and is held tightly by a strip of flexible plastic either side of the rear door, but on the housing I had the strips were of different sizes, the camera wasn’t pushed properly forward into the housing and the lens wasn’t centred in the port.

The result was that the buttons needed to be pressed really hard to operate the camera.

I also found that the soft white plastic used as the seal between the rear door and the front of the housing didn’t always seat properly, so it was better to close the door and check the seal, then use the over-centre latch to hold it shut.

Finally, the latch itself was large and positioned on top of the housing where it could easily be pulled open. I wrapped an elastic band top to bottom around the housing as an extra safeguard.

I’ve lambasted the housing a bit, but it’s watertight and I reckon some neoprene off-cuts and double-sided tape would have it tickety-boo in no time.

Both the OLFI and GoXtreme have wi-fi functionality and can beam their footage to either Android or iPhones, so you can shoot your video and have it posted to social media before you’ve rinsed the water from your ears, if you want. 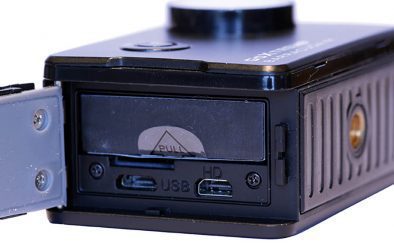 Both cameras ran for more than an hour on a fully charged battery, more than enough oomph for an average dive, and took a couple of hours to fully recharge.

The GoXtreme battery did seem prone to discharging over time, especially if the wi-fi was enabled, so it needs to be charged close to the time of use. A spare battery and charger unit would be a good idea for either camera if you’re doing more than one dive in a day.

A 10-minute full-HD 1080 video at 30fps was 1.6Gb from the OLFI and 1.2Gb from the GoXtreme, so the OLFI records more data and should produce the better results. If you shoot in 4K you’ll need to invest in fast cards, but the OLFI was picky about cards even at 1080 resolution. It’s not a big issue, but worth bearing in mind.

Above water, both cameras recorded sharp, detailed footage. Action cameras tend to be set to produce punchy recordings with high contrast and saturated colours that give the user in-your-face results out of the box, but that can often lead to washed-out highlights. 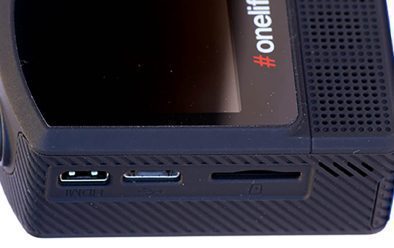 With exposure set flat and colour balance to auto I found that the OLFI produced slightly darker footage with a slightly warmer colour balance than the Barracuda. This meant that the highlights were controlled better, but shadows could block up.

By adjusting the camera settings and post-processing the files in editing software, I could get equivalent footage from both cameras. 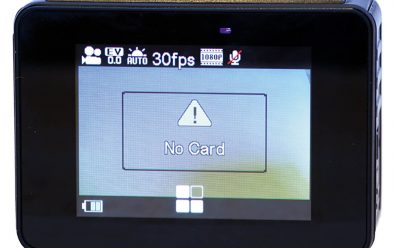 Both cameras were able to record decent colour down to about 5m in green water, which doesn’t sound much but is actually a pretty sound result. After that the Barracuda colour correction was banging against the stops, and the deeper I went the greener it all got, while the Underwater mode of the OLFI allowed better colour a bit deeper, say 8-10m in optimum conditions with some post-processing allowed.

You can colour-correct files from either unit in post to get better results, and the slightly larger OLFI files help to minimise quality loss, as does shooting in 4K and outputting your edited video at 1080. 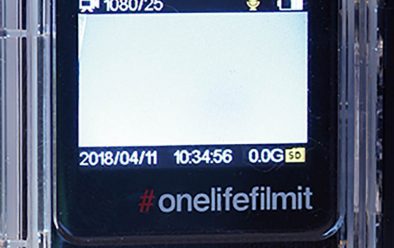 I expected nothing different. Colour-correcting underwater video at the taking stage isn’t easy, but at least these two cameras were consistent in their rendering of colour and exposure levels.

External colour correction was useful with both cameras, though you’ll need filters of the Flipfilter variety, because the housings aren’t shaped for readily available colour-correction filters. Add additional lighting and the differences vanish, as you’d expect, but then videographers tend to spend more on lights than cameras for a reason.

Time to make a recommendation. In a sentence, the OLFI has a better housing and better colour balance under water, but the GoXtreme is waterproof without the housing and has a bigger screen that’s nicer to use for composition.
So far, so tough to choose, but I’m doing the review so I get an extra sentence, in which I can note that the OLFI has the edge in photographic controls, and because I like to think I know a bit about cameras, that would edge it for me.