The WW1 U-boats at Pendennis have been dived for many years, by many people. The site is probably the second most popular shore-dive in Cornwall. Thousands of trainees did their first open-water dives there, most seeing the remains of one or two of the U-boats. Not sure what to write into their log-books, other than ‘Silver Steps’ or ‘Pendennis’, what were these subs? MARK MILBURN investigates, and believes he can now paint a clearer picture of what lies where and why 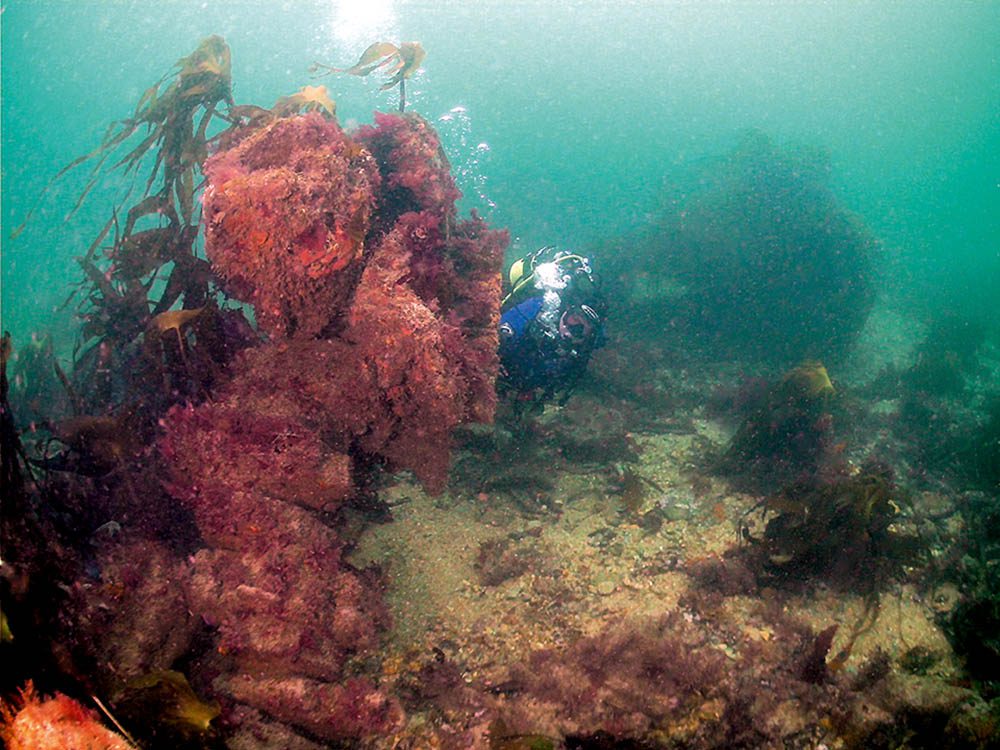 Diver beside the engine crankshaft of UB128.

I’VE BEEN STUDYING SOME OLD PHOTOGRAPHS, as well as the documented history, of the U-boats on Pendennis headland at Falmouth in Cornwall.

From these pictures, dated between 1920 and 1964, I’ve worked out where each of the U-boats was when it originally came ashore in 1920. I’ve even worked out which was which.

Having seen only the parts of three of the subs before, was there anything left of the others? I wondered. Maritime archaeologist David Gibbins came along with me to see what we could find.

The forecast was good, the tide was high and the in-water visibility had been improving. We parked in the usual lay-by, and walked down to check out the conditions.

The site was quite busy. Several local university students were taking photos for their marine and natural-history photography course. I had turned up with another photography student, who required pictures of a diver for his course. After spending a while posing in and out of the water, it was time to start the dive.

David and I snorkelled out past the students and their plethora of SMBs to the nearest U-boat remains, a section of UB112 in the next gully to the east of the Silver Steps entry-point.

Most prominent there is a three-pronged cast-iron object resembling a fork, thought to be part of a hydrovane mechanism. Otherwise, most of UB112 is very flat.

From the historic photographs the “fork” seemed likely to be part of the bow section. The earliest pictures show the sub quite intact, but in later ones, taken not that long after, the 6-8m bow section is no longer visible.

The visibility was some of the best I had ever had at the site, although kelp had started to cover the wreckage.

We then headed along the small gully to the east towards UB86. On the way I came across a black piece of pipe in the gully. I picked it up, and found it quite heavy.

Closer inspection revealed a clasp, which I recognised. I had a good idea what and whose it was – a neck-weight belonging to one of my freediving friends. He’d be happy.

The small gully runs east-west across the rocks, and as it nears UB86 gets quite shallow. It leads to the largest and shallowest part of the sub.

UB86 is the most dived U-boat, easy to find because it breaks the surface at low tide. There is a second set of steps near the Silver Steps, and if you’re looking straight up them you’re in line with the U-boat – it’s an easy transit.

The visibility was the best I had ever seen there, too. We spent a long time photographing and filming, because some sand had been removed by the winter’s storms, exposing more of the wreckage.

Several free-swimming cat sharks and some large wrasse joined us as we had a little rummage around some of these recently uncovered parts. We even had a school of pilchards darting overhead.

THE NEXT U-BOAT, UB97, was at least two gullies over, and with the state of the tide we would be very close to the surface if we went directly to it, so we surfaced to follow the coastline.

We snorkelled past the end of a couple of finger-reefs to where I thought UB97 might be. On the way I saw a very shiny object on the seabed, swam down a few metres and recovered a dive-knife. 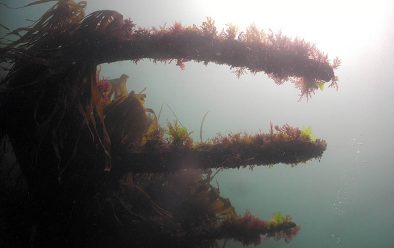 ‘Fork’ on UB112, possibly part of the hydrovane mechanism.

I was about to resurface when something else caught my eye. The shape looked familiar, and we took plenty of photos to study later.

A few metres away was a three-sided piece of heavy-gauge steel, I couldn’t see anything else, apart from another dive-knife, its blade eroded away.

In the next gully we saw what looked like the remains of a large electric motor, in the right sort of position to be from UB97. On to another gully, and on the edge of the finger-reef was a rectangular cast-iron block.

There are loads of these on the wreck of UB92, a few hundred metres away – they’re U-boat keel weights.

At the end of the next gully we found three large gas cylinders, exactly as we had seen in photos of the explosive trials where the hull had been ripped open.

About 3m long with a 1m circumference, these were big cylinders.

The rock-pool allows divers to do a giant-stride entry at more than half-tide via an underwater arch. As an entry-point it’s quite cool, but it does mean negotiating a very awkward and uneven path across the rocks.

The newer Hole in the Wall is still a rough walk across the rocks but it’s an easier one, and also allows a giant-stride entry at more than half tide.

Just outside the rock-pool cave exit and slightly to the east we came across some circular steel frames with large rivet holes and some curved plates.

THE FRAMES WERE QUITE SMALL, not U-boat size. We weren’t sure if they were from a submarine, but they were where I expected the stern of UB128 to be – although they could also be part of the bow of UB97.

The next and last of the subs was UB106. It was very close to UB128 in the photos, so we swam over the next ridge to see if we could find anything.

There were some very small pieces of rusted steel, and behind a rock what looked like a large mechanical wishbone or propshaft. Swimming around, we found lots of small bits lying about.

We headed further out, to find more and more wreckage that must have been the rest of UB106.

We then came across a crankshaft, con-rods and even the remains of what looked like two cylinders. The pistons had eroded away, but the con-rods and gudgeon pins were visible inside the cylinder-bore.

More photos, and even more wreckage. Our air was getting low, but we were at the deepest point of the dive now, 7.8m.

We swam east towards the shallows, and saw several more pieces lying around. An almost rectangular piece stood a few metres high and, jammed in tight next to it, were several pieces of Bakelite, parts of the batteries’ outer casings. There were also some lead pieces and latticework from inside the lead-acid batteries.

In around 5m we came across what was probably the largest single fragment of a U-boat. Standing 3m high and some 15m long, it was a piece of hull.

]We used what little air we had left to explore this section, and were at around 4m when we decided to surface.

We had been under water for 109 minutes, and a 400m surface-swim back to our entry-point was required.

AFTER THE DIVE, we went up to the catering van on the lay-by. The sun was shining, and we sat outside drinking tea and discussing what we had seen.

The familiar shape where UB97 was thought to be looked very similar to the fork on UB112, but without the wear, so it could have been part of the rear hydro-vane mechanism.

However, the wreckage from UB106, including the engine parts, made no sense. UB106 was stern into shore, and at low water its propeller and shaft were clearly high and dry.

Looking back at my overlay of the U-boats onto an aerial photograph, the stern of UB128 was also on the shore. How and why was there an engine there?

An aerial photo showed what looked like the outline of a submarine where the engine parts were. It lined up with where UB128 was, but 50m further out. It might have slipped off, or it might have been a failed attempt to haul it off to salvage elsewhere.

This area of wreckage is more than likely UB128, with some of UB106 possibly mixed in with it. The large piece of hull at the end of the dive had to belong to UB106.

So the layout I had been working on was quite accurate. We had managed to dive all five U-boats in one dive, although we had needed to do a couple of surface swims, plus the long swim back.

Had we started at the new hole in the wall we could have done all five submarines in a single submersion by avoiding spending so much time exploring and photographing each one.

THERE IS A SIXTH U-BOAT, UC92, which ended up in deeper water just off Pendennis. At some time it was dragged to Castle Beach and salvaged but there is quite a bit of it left, albeit requiring a 350m swim in the opposite direction. It’s best dived from Castle Beach, where it’s easily accessible and can also be spotted at the lowest of tides.

The visibility we had enjoyed in May was up to 10m and water temperature had been on the rise through the week. The neck-weight was returned to the freediver but the owners of the knives have yet to be found. Overall, a most excellent dive.

HOW THE U-BOATS CAME TO BE OFF FALMOUTH

At the end of World War One, the British Government found itself with more than 50 German U-Boats to dispose of. Scrap value was plummeting and they were pretty much worthless, so what could be done with them? 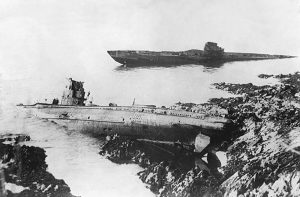 The washed-up U-boat nearest the camera is UB86.

Seven of the subs, along with the U-boat support vessel Cyklop, were sent to Falmouth. On route, a rear panel came loose on UB118.
It started taking on water and was close to sinking, so the auxiliary vessel Kennet fired on and sank the sub off Dodman Point.
Later that day, 23 November, 1920, the remaining U-boats arrived in convoy at Falmouth, and over the next three weeks various explosives trials took place.
There were 17 of these trials in all, each one involving the placing of different types and sizes of explosives at varying distances at sundry locations around the U-boats as they hung suspended at various depths by Cyklop. The Navy was trying to work out the best way to sink submarines.
By 15 December at least one of the U-boats was ashore, and the trials resumed on the other five at the start of 1921, finishing in March. As each U-boat was finished with, it was hauled ashore by naval personnel at high tide. Some even needed to have barrels tied on to give them extra buoyancy as they were dragged onto the rocks.
UC92 ended up on the sand, just off the rocks, south-west of UB112. At some point UC92 was dragged to Castle Beach and partially salvaged.
On the sand near UB112 are the remains of a small boiler from the steam tug Alice, which sank overnight while moored near the subs. It had been involved in salvaging the stranded U-boats when it sank, on 23 June, 1921.