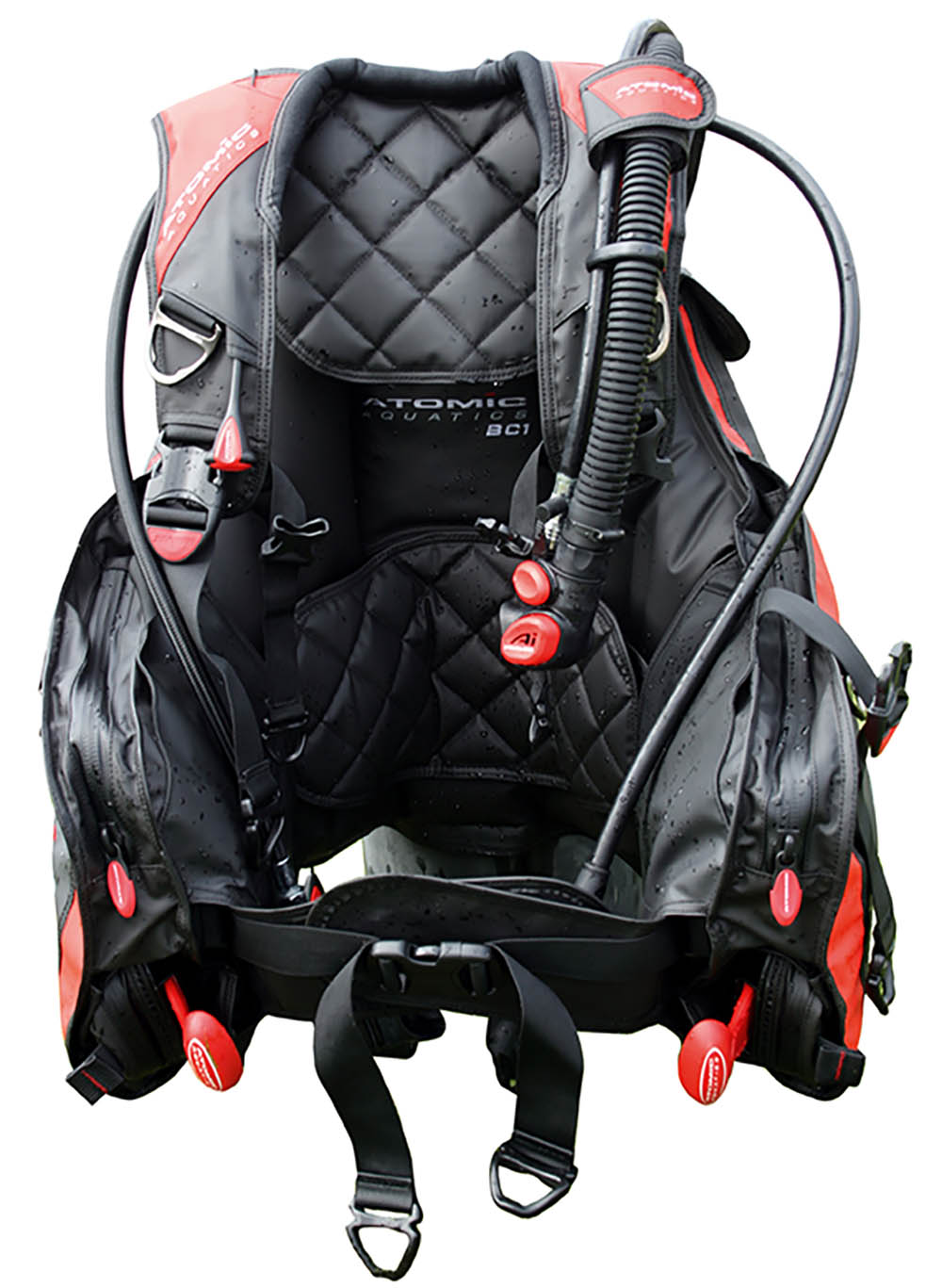 US MAKER ATOMIC has positioned itself unashamedly at the top end of the market, with pricing to match. It doesn’t do budget and it doesn’t do anything less than top quality, so its new BC was always going to be interesting.

Then, when the product was ready to go, Atomic began its marketing push with the bold claim that it had started the project with a blank sheet of paper and reviewed every detail, no matter how small, to produce the best BC on the market. And that makes the newly released Atomic BC1 downright fascinating.

When you make that sort of claim, you need to deliver. I won’t say I approached the review determined to pick fault with surgical accuracy and expose any and every shortcoming with tabloid hype, but if you want to think that, well, I won’t argue.

Time to open the box and take a look at the BC1, which came in a rufty-tufty carry-bag.

My first impression was that this is a weighty piece of kit, 4.6kg on the scales. My second impression was that it’s made of a slightly shiny, almost wet-look material, and that’s where we start to get down to it. Most BCs are made of tough materials that will take all sorts of punishment, but they do tend to absorb some water and take a while to dry out.

Not the BC1, which is made from a material that Atomic claims actively repels water. It looks vaguely like those wet-look PVC macs you used to get, only proper classy.

It’s a double-laminated polyurethane-coated fabric, and extends right to the edges of the zippers on the pockets to protect the teeth and prevent any sand or grit getting stuck in the zips and spoiling their operation.

The black and red colour combination looks stylish, as my other half pointed out. Or you can have it in plain black if you prefer, but why would you?

Get past the material choice and you’ll find what is basically a conventional jacket-style BC with large front buoyancy chambers that also house the pockets and the integrated-weight system.

There’s a rigid backpack, corrugated inflation hose on the left shoulder, dumps on the right shoulder and right hip, Velcro cummerbund with pinch-clip waist-band and a sternum strap.

The integrated weight system is claimed by Atomic to be remarkably easy to use. Each side holds up to 4.5kg of hard or soft weights and the pockets slide easily into place, locking with a distinct snap but coming out easily with a firmish tug on the handle. They worked extremely well, out of the water and in.

A pair of small trim-weight pockets that can hold up to 2kg apiece are situated on the back of the jacket at shoulder-blade height in case you need help with your trim, or just a bit more lead.

The inflator is a very high-spec item, with well-sized buttons to inject and dump gas, and there’s a Velcro loop on the shoulder-strap and a clip on the corrugated hose to hold the inflator neatly in place and readily to hand.

The dump-valves are stainless steel, and Atomic has redesigned the round black plastic ball used by just about everyone else into a sleek, sexy, triangular knob that you pull to dump gas.

Inside the BC1 you’ll find an adjustable padded lumbar-pad and shoulder-pad to make the BC more comfortable in use, with the latter covering a neat carrying handle.

Look closely and you’ll also see that the harness is pretty much separate from the buoyancy cell, which means that a fully inflated BC1 shouldn’t squeeze you too tightly.

Then you turn the BC1 around and see the camband for attaching a cylinder. This looks like no camband you’ve ever seen before, and is claimed to operate more like ski-bindings than a conventional camband.

The strap is a composite material with a stepped outer surface on the part of the band to the right of the cam.

You drop the BC1 in place over your cylinder, pull the camband roughly to the right length and lock the adjustment using a red plastic plate. Then you snap the over-centre cam into place to fully tighten the camband around the cylinder and hold it firmly against the curved plate on the back of the BC.

It all takes much less time to do than to describe, and it’s the easiest and most positive camband system I’ve ever used. On test it held the cylinder as tightly as any standard camband, but without the potential to stretch when wet and the subsequent need to retighten the band.

But is it any good? Well, first of all the review sample sat in my spare bedroom, blown up hard enough to make the over-pressure valves operate, for two full days without going soft.

So I was pretty confident that it would hold gas and do the buoyancy-control thing properly before I got it anywhere near the water, which is always encouraging.
Thus reassured, I strapped this new BC to my 30-year-old but still in-test steel 15 and took it for a dive. 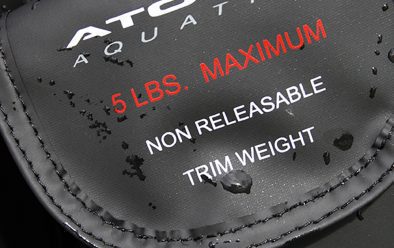 The side trim pocket.

You know the Tardis, Doctor Who’s time and space machine that’s bigger inside than out? Well, out of the water, either strapped to a cylinder or not, the BC1 looked large and bulky, but as soon as I put it on and adjusted the straps, a remarkable thing happened.

The size and bulk vanished and the BC settled into place just beautifully. I could even reach the zippers to open and close the pockets, though they turned out to be shallower than I expected, because the integrated weight-pockets take up a lot of the available space.

Back to the padding on the inside of the jacket, and if I tell you I’d have sworn I was using a smaller cylinder if I’d had to guess from the feel of the harness, you’ll understand why I was impressed, especially as I had to walk a bit to get to the water.

I won’t say I’d have happily done the shopping in this BC, but it’s as comfortable as any I’ve ever used, and much better than most. 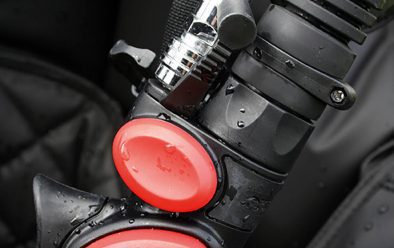 I had wondered if all that padding would require extra lead to sink, but as soon as I dropped into the water it was clear that it didn’t, and the rate of inflation offered by the power inflator was perfectly judged.

You might even call it slow and steady, but one of the secrets of good buoyancy control is to be adjusting your buoyancy in advance, and the BC1 inflator made that easy.

If you prefer, you can have the inflator in stainless steel or titanium, or opt instead for the pairing of an inflator and octopus unit.

True, the dump-valves were a bit more gung ho, but that’s OK; if the inflate jams, you need to dump fast to avoid a runaway ascent.

And yes, I tried it, and no, I didn’t ever feel as if I was about to ascend.

I’ll also confess that I was a bit sceptical about the redesigned dump-pulls. I mean, what’s wrong with the black ball used so universally?

Nothing, but there’s no denying that the redesigned arrow-shaped pulls were easy to find, easy to pull and positive in action. 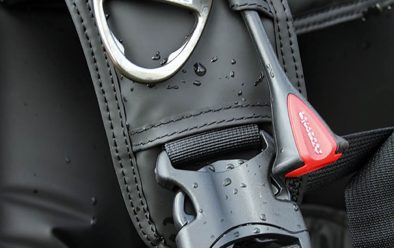 In-water trim was rock solid and the BC didn’t move regardless of my attitude in the water, so I was very soon just enjoying the dive and not thinking about the kit.

At the end of the dive the BC1 lifted my face and mouth so far clear of the water I’d be quite happy to wait for the boat even in a decent swell and, no, there wasn’t much squeeze from the fully inflated buoyancy cells.

Relax completely and I found the BC1 tilted me just a little backwards, face up. That’s nice.

Anything else? Well, yes, the D-rings. There are titanium-coated stainless steel D-rings on each shoulder-strap, more on each pocket and yet more at the bottom rear of the BC above each buttock. I’d happily sling a stage on this BC, and there are more D-rings than any sane diver needs to clip on reels or torches.

All of which brings me to the conclusion that Atomic has probably achieved exactly what it set out to achieve, and built the best jacket-style BC in the world. I can’t fault it in terms of sheer performance.

But. And I’m sorry about this, but there’s a bit of my brain that’s pointing out that the Atomic BC1 costs well north of a grand. That’s a lot of money for just your BC, bearing in mind that it’s quite possible to buy a full set of warmwater gear that will do the job for less than a thousand pounds.

On the other hand, I have a car-salesman friend who lives by the motto that pride of ownership in a high-quality product lasts much longer than the warm glow of a bargain price and, as previously stated, Atomic is top-end.

At the end of the day, it’s your call. If you can afford an Atomic BC1, you won’t be disappointed with your new BC.