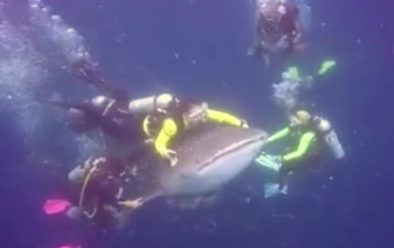 Police are reported to have arrested a group of scuba divers shown recently in a video riding on the back of a small whale shark in Cenderawasih Bay national park in eastern Indonesia.

The videographer is unknown but the 22-second clip , initially shared on Facebook by diving instructor Wayan Segara Bali on 9 August, has to date attracted more than 765,000 views and drawn intense criticism on social media.

The whale shark appeared to be in distress as the divers were seen holding onto its back and fin. They were later identified as guests aboard a Sea Safari Cruises boat.

The company operates 35m-plus phinisi-style wooden schooners on itineraries east of Bali and says it is “Indonesia’s largest fleet of luxury liveaboard vessels”.

When local environmentalist group Bird’s Head Seascape challenged Sea Safari Cruises about the divers’ behaviour, it responded with a letter in which it said that the dive was ended following the incident, with no further dives allowed at the site.

“We in no way condone or facilitate or promote this kind of interaction with marine life,” said the company.

“When guests come aboard and before any diving activities commence there is an essential briefing regarding common accepted safe practices such as maintaining good buoyancy and not to disturb or harass the marine life.”

When diving in Cenderawasih Bay, the company said that a site-specific briefing would remind divers not to touch or disturb the well-being of the whale sharks. “This is one of those regrettable incidents when experienced divers, with a higher certification level, decided on their own to not act according to the instructions in the dive-briefing and not follow the guidance of the divemaster.”

Sea Safari Cruises stressed that all the divers, including the one who filmed the incident, were guests and not employees, and said it would “strive to maintain our high standards and continue to find ways to improve our mechanisms for preventing an incident like this from recurring.”

The divers were arrested some days after the incident but their identities and nationalities have not been given out, and details of the charges they face are awaited.

The experience of diving from a Sea Safari Cruises liveaboard in Raja Ampat will be featured in the October issue of DIVER.