For 27-year-old Lukas Mueller, freediving with the ocean’s apex predator is a day-to-day reality. MELISSA HOBSON met him to hear his story – photos other than the portrait by the man himself 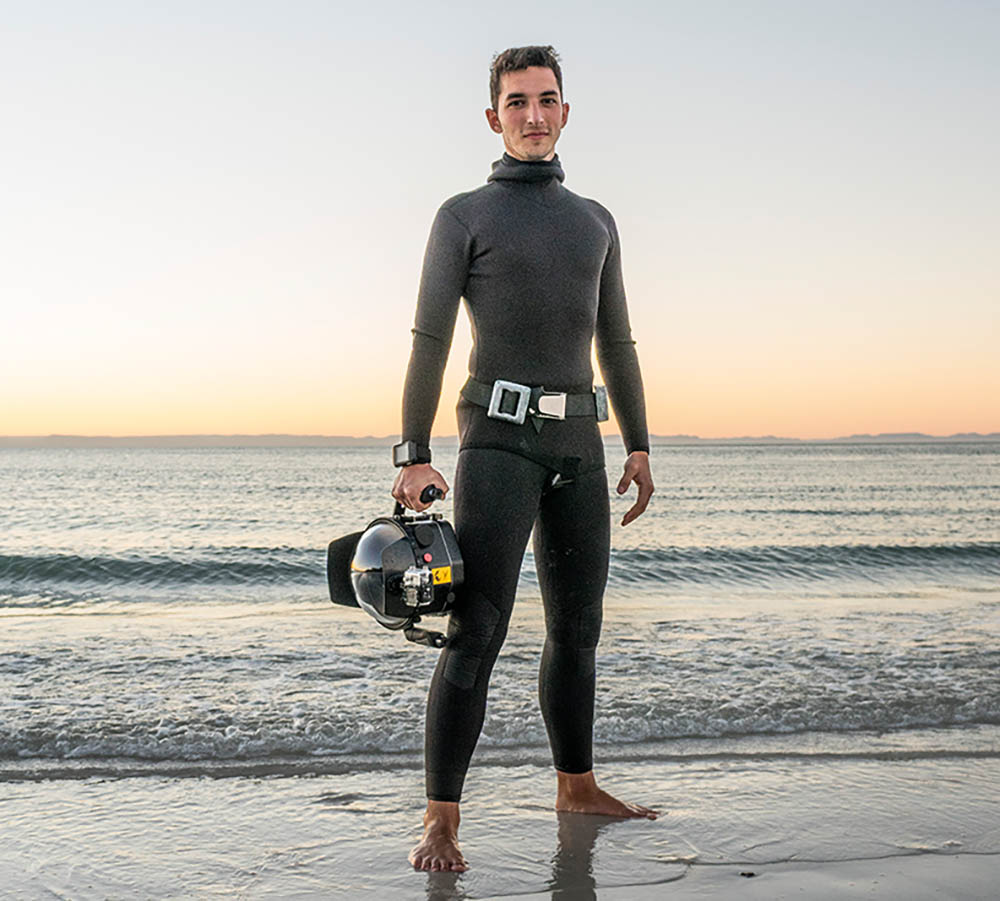 FROM AN EARLY AGE, it seems that Lukas Mueller was destined to work with sharks. Even as a toddler, the freediver, marine biologist and “ocean media” producer was fascinated with fish, and has made it his mission to seek out interactions with marine life ever since.

“My focus lies on projects that highlight the unique stories of the interactions between people and nature, and help inspire others to leave their comfort zone,” he told me. “To get off the couch and do something.

Just a few minutes into my meeting with Lukas it’s clear that this young man – one of the few people who freedives routinely with great white sharks without a cage for research purposes – is anything but ordinary.

His work is risky, both physically and mentally, and requires him to be in peak condition. Trained and mentored in freediving by world record-holder William Winram of the Waterman Project, he has learnt how to interact closely with these awesome animals from one of the best.

I was interested to find out how his interest in shark protection had begun.

“The shark that came up from the depths was, maybe, inches from my feet,” he said of his first great white sighting, while volunteering for the White Shark Project in Gansbaai, South Africa. “It broke the surface and, as it looked me straight in the eye, I could even see its blue iris.

“Disappearing with a powerful stroke of its tail, I knew this was what I wanted to do with my life. There’s something fascinating about the connection we can have with another species.

FOR THE PAST SIX YEARS, Lukas has been on expeditions around the world, seeking encounters with large predatory sharks to understand what makes them tick. “But also,” he added, “what makes us tick that we seek out these interactions.

“I love seeing the fin of a shark swimming towards me, and the moment when it turns and looks at me and this dance and interaction begins, in which we’re both trying to figure out what the other is thinking and how we’re going to deal with each other.

“One of my first really close encounters with sharks was in the Azores. It’s a volcanic island group surrounded by deep drop-offs with crystal-clear blue waters, and it’s a perfect environment for blue sharks.

“Diving down with one – a 2.5m male – I held my breath and hovered in the open blue with the shark 20m away. Floating there, without gravity, the peaceful shark came towards me with true and honest curiosity.

“I totally underestimated how close it would get, so we played a little game of chicken until it turned, right in front of my face. I could have kissed it if I wanted to – of course, I make a point that I never touch the sharks.

“This was one of the best moments of my life, not only because of the amazing encounter but also because it was one of the first opportunities to show my family – who had supported me from

the very beginning – the animal I’m trying to save.

“My father, brother and girlfriend shared the moment with me and the inquisitive shark swam right up to them as well, trying to figure them out (that is, once I’d pointed out to my girlfriend that she was so excited that she would scare the shark by trying to approach it herself).”

MOST OF US KNOW the buzz and excitement of sharing your experience of a shark-dive. Imagine the excitement of hundreds of incomparable encounters compounded in one person’s experience, and you can probably get an idea of how Lukas feels about sharks.

“Sharks are, by far, the coolest animals in the world,” he says. “People can argue for grizzly bears or lions, eagles, snakes or Komodo dragons, but it’s sharks that are just the coolest.

“To me, they are the embodiment of the perfectly adapted predator. They are resilient and efficient, can manoeuvre incredibly quickly and even launch themselves out of the water.

“They have keen eyesight and can sense the earth’s magnetic field to travel huge distances and migrate across oceans.

“The bull shark, in particular, has tools in its repertoire that will blow anybody away. It’s one of the few fish that can transition through eco-systems: occupying fresh water, brackish water and salt water; surviving just as well in the open ocean as it does in lagoons, or even in murky waters 4000km into the Amazon river.”

The energy Lukas emanates when I ask him about the best part of his job is palpable. His face lights up and his voice, usually measured and calm, speeds up as he tries to cram everything in: “There’s nothing I don’t love about my job. I love every single day of it.

“I love that feeling of weightlessness when you descend and begin to freefall, flying through the water column surrounded by creatures that look like they’re from a different planet.” 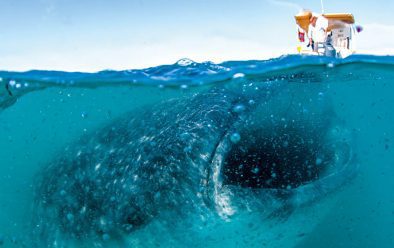 I ask how a freediving encounter differs from one on scuba: “I love to scuba-dive because you’re able to spend so much more time exploring deep reefs and seeing all the animals. With my research, though, freediving definitely gives me the edge of having closer, more intimate interactions with animals.

“Without the Darth Vader Dark Side noise of a regulator,” – here he pauses and imitates the heavy bubbles of a scuba-diver, “animals aren’t scared away and the silence allows them to show their true curiosity.

“They come to check you out and it helps you to understand how they behave towards creatures that don’t make a lot of sound. Being able to scuba-dive and freedive gives me the best of both worlds!”

His favourite place to dive? “Guadalupe Island in Mexico – it has one of the world’s biggest white-shark populations. You’re normally allowed to dive only in a cage there, but with the Waterman Project I’ve been lucky enough to freedive with sharks in this beautiful eco-system while conducting scientific research.

“Some of the closest encounters I’ve had with the king of the ocean have been here. Swimming through deep oceanic canyons and algae forests with seals all around you, a great white will pass just 10m beneath you through the volcanic rock formations. It’s truly incredible.”

You can believe Lukas when he says that a love for the ocean is in his DNA. Growing up in Essen, Germany, he would snorkel in rivers and lakes with his father and brother, but had access to the sea only during family holidays to Spain.

“I would spend eight hours in the water, until my mum had to pull me out because my skin had wrinkled up, and I looked like a frog,” he remembered.

ONE OF HIS FIRST close-up shark encounters was a conflicted one. “My dad and I joined a fishing trip when I was five, and I saw a shark caught by a fisherman. 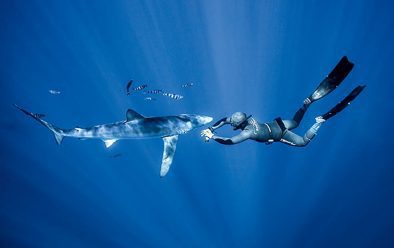 “At first, I was amazed to see close-up this animal that I’d only ever seen in books and documentaries but, seconds later, a wave of sadness hit me because the animal was dead right in front of me.

“That deep empathy has stayed with me ever since.”

His frustration that it’s often only people with money from developed countries who are able to enjoy the diving experience has led Lukas to work with virtual reality: “A lot of marine-conservation issues are happening in developing countries where people are not affluent enough to go out and see these amazing reefs, pelagic eco-systems and estuaries. When I came across virtual reality I thought wow, this tool can bring the ocean into your living room.

“Together with a team of VR film-makers and the ‘Queen of Mantas’ and co-founder of the Marine Megafauna Foundation Andrea Marshall, we produced a virtual-reality film that highlights the impacts of plastic pollution on our oceans. When we showed this film to local people, their emotional response was amazing.

“I’m excited to explore the potential of VR to inspire more people to protect sharks by showing them exactly what I see when I’m in the ocean – like the blue shark experience I shared with my family.

“When people hear, see and smell the experience for themselves, it ignites a passion and makes them want to protect this animal and its environment.

“Ultimately, that’s why we take pictures and encourage private individuals to join us in the field. My hope is that bringing these astonishing encounters into people’s homes through virtual reality can help turn the tide for sharks, and recover the pressure we humans have put on them – watch this space…”

Lukas’s passion is infectious, and I’m confident that you’ll hear more from this inspiring man in the years to come; hopefully, along with a positive sea-change for shark conservation.