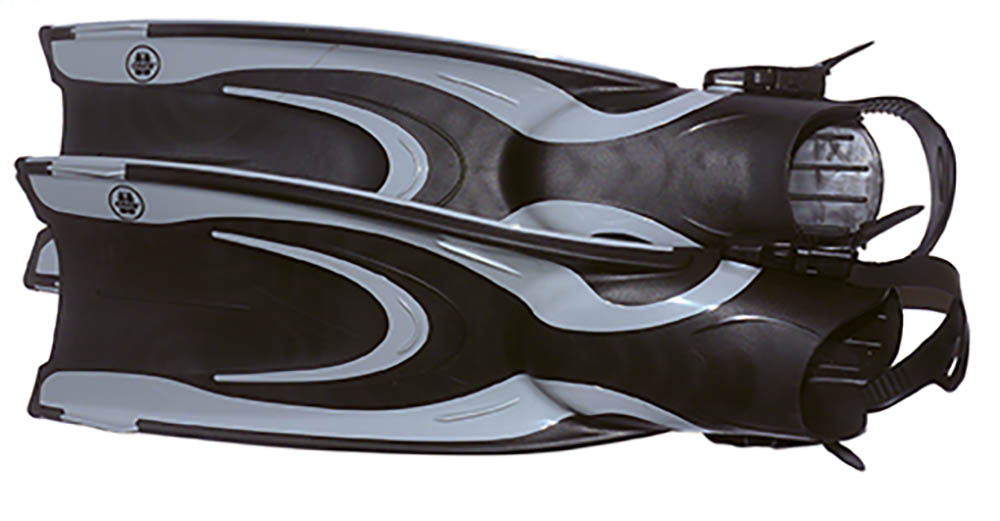 On a trip a few years ago to the Maldives with just a 23kg baggage limit for the hold, I left my big current kickers behind. Effective as they are, the long rubber blades would have pushed me into the cascading costs of excess baggage.

Instead, I reached for a pair of vintage vented Jet-fins, ostensibly from my historical dive-gear collection. The short plastic blades are lightweight and take up little room and, in the swift currents among the Indian Ocean thilas and drop-offs, my calves got a serious workout.

As a rule, most of the fins reputed to be high-performers – the typical choice for pushing tekkies encumbered with stage-bottles and reccies with cameras dicing with high currents – tend to be heavy-bladed.

OMS (Ocean Management Systems) Reefstreams are fairly traditional-looking power fins. They feature a medium-length blade with flex panels, but pick them up and you’re immediately struck by how much lighter they are than many others. This is because of the use of thermoplastics rather than rubber to form the blade.

The blade does not have vents, which are designed to let water flow through easily on the weaker recovery kick and, allegedly, made those heavy, inflexible rubber-bladed fins of the 1960s much easier to use.

The Reefstream takes its cue from fin design of the late 1980s, more often favoured by recreational divers. The blade is built to flex and scoop the water, pumping it out behind you for propulsion on the downstroke and letting it flow easily off the blade on the upkick.

So, returning to the Maldives, how would the Reefstreams cope with those currents?

Well-enough is the answer. I don’t think they have the thrust of a heavier-bladed fin but, of course, that’s the compromise you expect to make if you want to travel light.

You can easily flutter-kick, frog-kick and move backwards, so the Reefstreams are perfectly manoeuvrable, one of my scoring criteria. Comfort is another. The Reefstreams’ heel-pocket and straps were entirely comfortable and secure under water, even when swimming very hard. 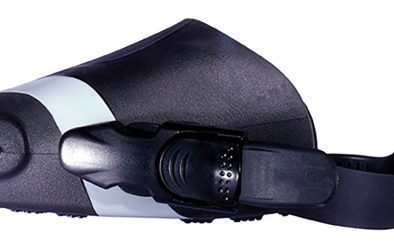 The straps are conventional, with swivel buckles you press to slacken and pull on the strap-end to tighten. A loop in the strap lets you hang your fins from your harness or thumb the strap on or off your foot.

Diving in current and choppy seas makes you want to reboard your boat as quickly as possible – in common, unfortunately, with everyone else. Fins that are hard to remove can leave you swinging on the ladder while a disgruntled crowd builds up behind you.

I found the Reefstreams dead easy to take off one-handed. There’s also a squeeze-release built into the buckle (easily usable with thick gloves), though I never needed to disconnect it to remove a fin. But it does mean that if you carry a spare strap with the male buckle parts, you can be ready to go again in seconds should a strap snap as you don your fin.

OMS offers only two models of fin – the other is a much more expensive vented item – and most manufacturers would regard the Reefstream as middle of the range.

It wouldn’t be my first choice if weight and cost were no object but, seen in the context of a medium-priced and lightweight fin, the Reefstream delivers excellent manoeuvrability and comfort, even if it lacks the thrust of costlier, heavier models.

WEIGHT> Just under 2kg per pair in size M