Where the Water meets the Sky

Where the Water meets the Sky 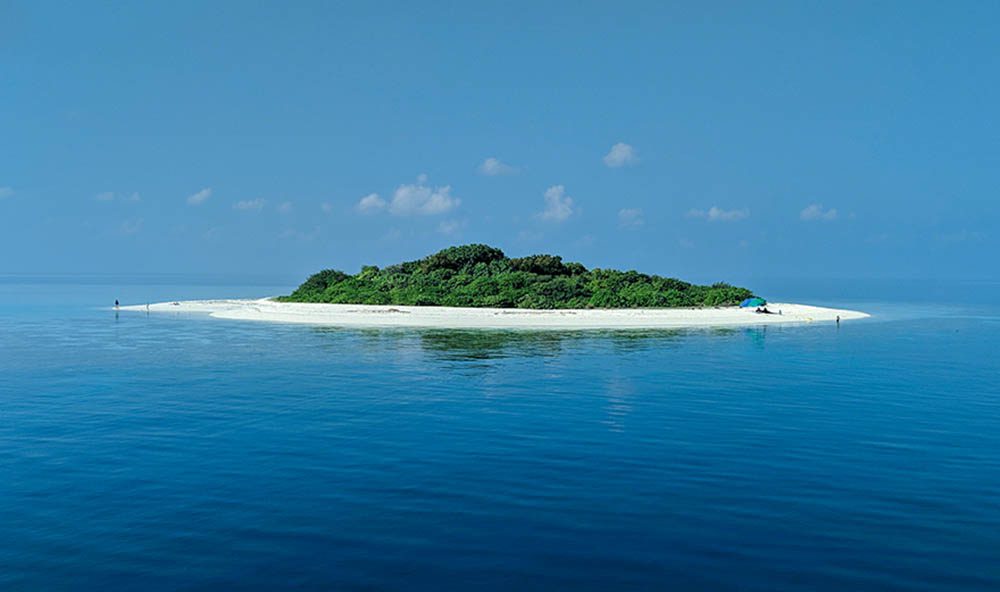 An uninhabited island – ideal for an afternoon break.

THE DHONI CUT THROUGH the flat-as-glass water, leaving a wake that quickly disappeared behind us into the sultry haze of an early spring morning in the Maldives.

With no other boats in this remote and uninhabited area of Thaa Atoll, we would have been enveloped in silence were it not for the engines of the dive-boat and the chatter of the divers preparing for their next dive.

Periodically, a flying fish would leap from the languid sea and skip across the water, leaving fleeting tell-tale tracks on the surface before dropping back into the ocean a few hundred feet away. We were headed to a pass, a cut in the fringing coral reef around one of the local islands, in the hopes of an exciting dive.

Suddenly, the water began to boil as a pod of several hundred spinner dolphins rapidly approached and began an impromptu round of bow-wave surfing with our dhoni. 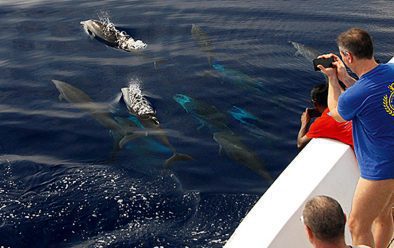 A pod of dolphins playing alongside the dhoni.

Several began swimming just ahead of the boat, riding its pressure wave, while others were leaping from the water in their famous spins. We could see their soulful eyes and hear the “whoosh” of their breaths as they surrounded the boat. While we wouldn’t have wanted to anthropomorphise this event, it did seem that these marine mammals were exuding all the joys of life on the open ocean.

For us, it was time to dive…

This surface encounter took place on the second day of our expedition aboard the Duke of York liveaboard to explore the southern atolls, starting from Laamu in the Upper South Province and eventually ending up in Male for the return trip home.

It would be followed by more dolphin encounters in other atolls and a remarkable encounter with a pod of short-finned pilot whales. For a week we would wind our way through the diving passes, coral reefs or giris and the pinnacles referred to as thilas.

Today’s dive was at a site known as Fushi Kandu. We descended to 18m to reach the drop-off and then dropped further down, exploring coral overhangs and cut-outs in the reef wall to reach a depth of 30m.

A slight outgoing current meant that our dive started inside the atoll and ended on the ocean side of the reef.

ALONG THE WAY WE SPOTTED varieties of gaudily coloured butterflyfish, including the redtail, and angelfish such as the yellow-face variety. Swarms of anthias, sporting brilliant reds and purples, flew above the corals while timid soldierfish clustered under coral shelters and rocky crevices.

But the real action started as we reached the corner or bend in the pass opening. Because of the rush of water entering or leaving the atolls on the tidal exchanges, large schools of pelagics gather there, looking to prey on smaller fish that are similarly taking advantage of the nutrients introduced by the movement of water.

Massive schools of bigeye trevally mixed with equally dense groupings of snapper, and all of them kept a wary eye on the whitetip and grey reef sharks patrolling the pass in the distance.

Emerging from the water into the warm morning air, everybody had huge grins on their faces as we prepared for breakfast. The daily routine aboard the Duke of York allowed for plenty of dive-time between sumptuous meals, and ample opportunity for rest and relaxation.

We would wake each morning to a dive briefing before heading out in the dive dhoni for a typically exhilarating dive, followed by breakfast, a mid-morning dive, lunch and an afternoon dive before dinner. Plenty of nitrogen to be had by all!

After leaving Thaa Atoll, we headed for a secluded stretch of the Meenu Atoll and a dive at a site known as Kureli Kandu, stopping to photograph a curious honeycombed moray eel as it poked its head out of its lair to inspect our wide-angle domes.

There was more current than on previous dives. Diving the Maldives often involves careful consideration of the water flow, and paying attention to dive-briefings is important.

SMBs and current-hooks are also a good idea, because the water can rush through the pass openings with unpredictable fury at times. Of course, it is this movement of water that brings the astonishing aggregations of marine life to these sites.

IN VAAVU ATOLL, we dived at a place known as Fotteyo Kandu. The coral walls of this pass are liberally draped in soft corals. Brilliant yellow, orange, purple and red corals adorn the rocks and coral overhangs while schools of snapper, soldierfish and butterflyfish flitted by.

Here, we also encountered giant triggerfish, lionfish and various species of the ubiquitous anemonefish. The dive was so special that we decided to repeat it the next day.

As we made our way further north, we did a night-dive under Alimatha Pier. Fishermen have come here to unload their fish for ages, and the scraps tossed into the water have attracted dozens of nurse sharks and untold numbers of opportunistic giant trevally.

A night-dive here is a surreal experience, with trevally and rays zooming by, and large nurses emerging from the gloom of night and patrolling overhead. However, divers must be mindful and not place a hand or knee on a looming lionfish.

An otherwise intense dive was interrupted by muffled laughter through regulators as one of our dive-guides literally jumped off the sandy bottom in a near-panicky surprise as a large sting ray swam just beneath his legs!

Other dives brought encounters with more sharks, schools of barracuda, groups of sweetlips, grouper and fleeting glimpses of tuna and eagle and manta rays. Unfortunately, some of the larger animals remained just outside our camera range or, maddeningly, too deep and beyond our limits to be photographed properly.

We even heard the distinctive clicks and whistles of passing pods of dolphins on several of the dives. 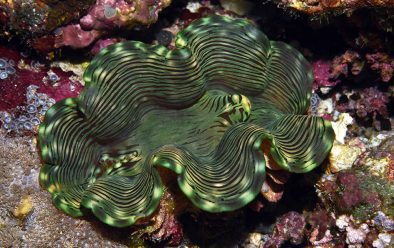 The mantle of a ridachna clam.

The reefs in the southern atolls remain very healthy. Our expedition took place in late March, and we found the surface temperatures in the atolls distressingly high, but only a few feet of depth brought cooler water, and we saw few signs of coral-bleaching. We encountered a wide variety of marine life, and reefs dripping with vibrant colours.

Wide-angle photographers can create images of dramatic walls and reefs, along with large pelagic animals such as eagle rays, schools of trevally, dolphins and, at certain times of year, manta rays and whale sharks.

UNFORTUNATELY WE FAILED to encounter any of the latter on this trip, and the only manta encountered was seen by the snorkellers and not by the divers!

Macro photographers can lose themselves pursuing the perfect image of a goby on a gorgonian, or a blenny peeking out from a hole in the rocks. Make sure you bring plenty of memory cards – you’ll need them!

Our final dive aboard the Duke of York was at a site known as Kandooma Thila in South Male Atoll. Here, in depths of water reaching 30m, we found several whitetip reef sharks, an impressive school of barracuda and a very curious hawksbill turtle that seemed infatuated with its reflection in the dome-port.

We concluded the trip with a few days on land at the Pearl Sands Hotel on the island of Kuraa. Albatross Top Dive, owner of the Duke of York, also runs a dive-centre on site there.

Only 30 minutes by speedboat from Male, this is an accessible island with a private beach that feels as if it’s a world away – and the diving there is very good as well.

ON THE DUKE OF YORK we were an eclectic group: a few open-circuit scuba-divers, tec divers, snorkellers and a freediver from Italy, two American photographers and a crew comprising a Russian divemaster married to an Indonesian woman who served as the on-board masseuse; a French national living in England; and others from Bangladesh, India, Sri Lanka and, of course, the Maldives.

A group of individuals, all with common interests and all working to make the trip a success in a wide swathe of Indian Ocean, where the tiny islands of the Maldives mark the almost indiscernible threshold between the water and the sky.

GETTING THERE> The only international airport is located on the main island of Male. Most flights from the UK stop at either Doha, Dubai or Colombo. Liveaboards such as the Duke of York arrange pick-ups at the docks alongside the airport. 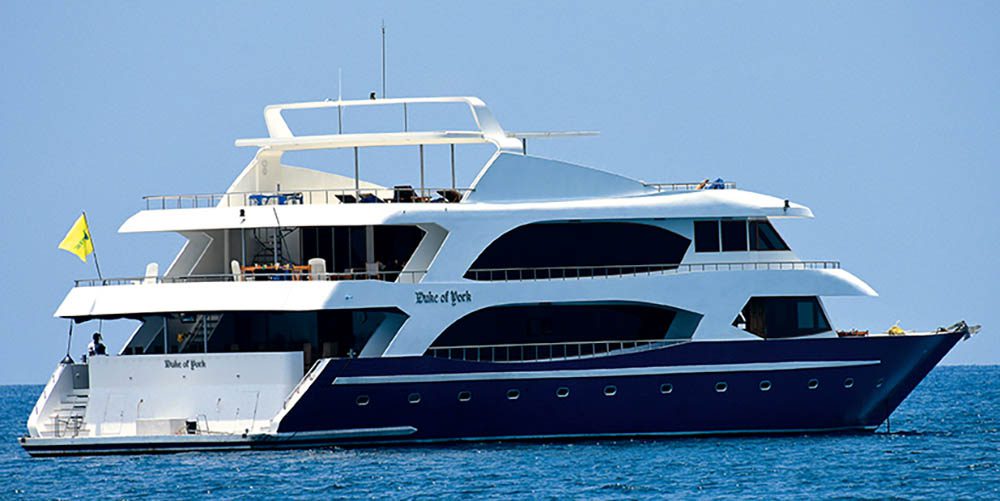 LIVEABOARD> The 36m Duke of York, built in 2010, has 10 large en suite cabins, all with air-conditioning. There is a diving dhoni and a team of at least 11, luxuryyachtmaldives.com

WHEN TO GO> The Maldives has an equatorial tropical climate. December through April is the dry season, February through April the hottest time of the year, and May through November is the rainy season.

PRICES> Return flights from £500. Duke of York charges from US $2555pp for two people sharing an eight-day itinerary. Nitrox is free.