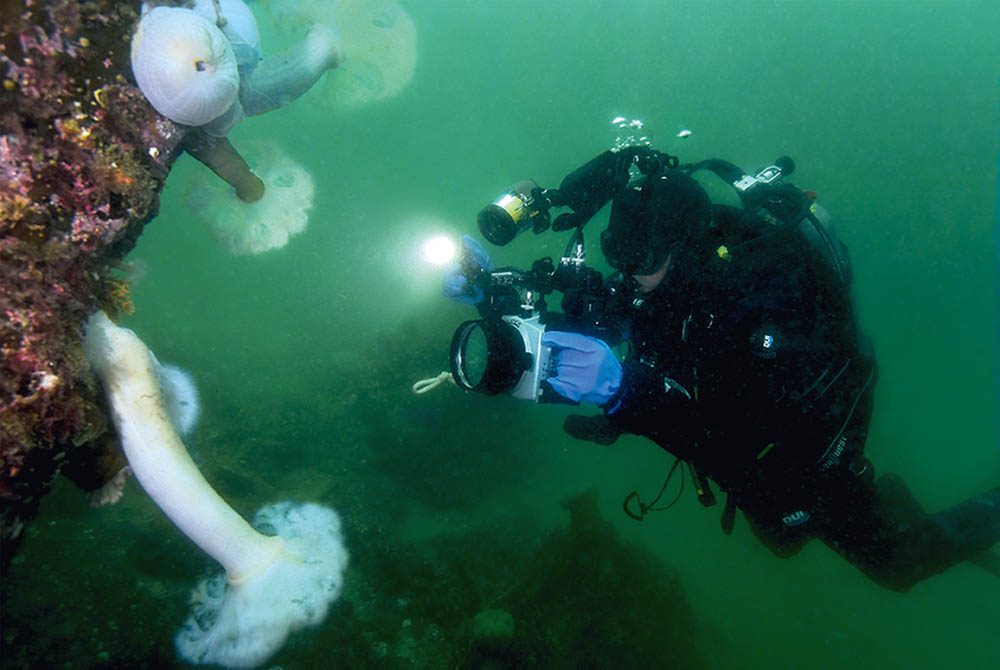 “hey, you guys need a lift?” Standing outside Valdez Airport with our pile of dive and photographic gear, and no means of transport in sight, this offer from a friendly stranger named Jeff, who worked at the airport, was music to our ears.

We had just arrived after a cross-country flight, so this was the very start of our Alaska dive adventure.

The unsolicited offer to drive us to town was emblematic of the friendliness and willingness to help that we would encounter throughout our time here.

Our dive expedition began in earnest the next morning, after a restful night in a waterfront hotel. We loaded our gear, boarded a transport boat and set out from Valdez Harbour to Fidalgo Bay, three to four hours away.

Our objective for the trip was to experience Alaska’s underwater world, immerse ourselves in the wilderness and possibly find salmon sharks in the waters of Prince William Sound.

However, before we had even arrived at Ravencroft Lodge, our base of operations for the week, we found ourselves in the ice-choked waters near the Columbia Glacier.

Icebergs, both small and large, and of varying shapes, sizes and colours, bobbed in the cold waters. Unlike other Arctic regions, where groups of seals can be seen hauling out on the icebergs, here we were treated to the site of dozens of otters relaxing on their tops. The urge to snorkel the icebergs became irresistible!

Our journey to the lodge continued, with sightings of bald eagles, stellar sea-lions and false killer whales keeping us and our cameras busy. Eventually we arrived at the well-appointed wilderness lodge, and our attention turned to the dives ahead.

The waters of Fidalgo Bay are somewhat sheltered between two strips of land and some towering mountains, but they are open to the exposed stretches of Prince William Sound, and can turn rough quickly.

We were fortunate that, during our time in the area, the seas were calm.

Our first dive was directly in front of the lodge, and we were immediately intrigued. A lush garden of seagrass was home to beautifully adorned opalescent nudibranchs, small jellies, assorted crabs and a variety of starfish, while further out in somewhat deeper water we found brilliantly coloured starfish and foot-long sea cucumbers wandering a bed of bull kelp.

One of the divers in the group located an oxymoronic small giant Pacific octopus hiding in a rocky lair.

We didn’t see this individual, but we would come across one on our last dive of the expedition.

back in the seagrass, we located an old abandoned ore cart, a relic from the past history of copper-mining in the area. Ravencroft Lodge is built on a former mining site and, in addition to this submerged cart, there are artefacts scattered about the grounds of the lodge.

A short hike into the forest will take visitors to the site of the original mine. Mining for copper occurred in the early parts of the 20th century before being abandoned due to a drop in copper prices. 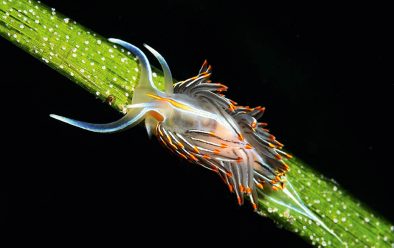 An opalescent nudibranch on the seagrass.

Before setting our sights on deeper dive-sites, we took advantage of favourable tides to explore a glacier-fed river in which salmon begin their migration from the sea upstream to their preferred spawning grounds deeper into the forests. Here, in only 1.5m depth, we battled the fierce rush of tumbling 8°C water to remain still and photograph hundreds of chum and pink salmon, as they raced by in a desperate push to pass through fallen trees, waterfalls and rocks and continue their journey upstream.

Some would dart past us at a frenzied pace, while others could be found resting in the eddies and pools, as if to catch their breath before making another push upstream. By the time we hiked back to our skiffs we were all exhausted, excited and gratified to have witnessed one of nature’s miracles.

Dawn comes early to Alaska in the summer months, and the next day we were awake way before breakfast, eagerly anticipating our first search for the mysterious salmon shark.

As we fiddled with our cameras and assembled our gear, we went over the details of what conditions we would be looking for, and how to dive with the skittish sharks.

According to the experts at Ravencroft, we needed flat-calm water to spot the small dorsal fin slicing through the surface. Once spotted, we needed to find a “player”. This is a shark that’s interested in feeding and not too skittish as to be unapproachable.

It can take some time, we were told, and indeed it did. In fact, after several hours of looking, we had found none.

This pattern would repeat over the next few days. We did see one individual on the surface, but we were never able to get into the water with one.

Nature is not predictable: an unusually cold summer could be why we failed to find salmon sharks during our visit.

Theories as to why salmon sharks frequent these waters and linger on the surface for the summer months focus on water temperature. Warm-blooded, they might be rising from deeper, colder water to bask in the warmer surface layers of the sea. The season for spotting them is short, only a few weeks across the months of June and July.

Our quest will continue on a future trip, in the hope of finally capturing photographs of this elusive creature!

After our search for sharks, we decided to dive some rocky outcroppings nearby.

At a site known as the Magic Garden, we found carpets of huge plumose and metridium anemones adorning the boulders. In addition, we photographed black rockfish and other species of Alaskan bottom fish.

The dive-sites here generally consist of a rocky sloping terrain until about 20-25m depth, when they typically drop off on a vertical wall to 180m or more.

we continued our exploration the next day to several previously unexplored sites. It’s always exciting to dive a new location and find out what’s below, and we were not disappointed.

Our first dive placed us into relatively clear water, with a beautiful bottom topography of rocks and crevices.

We found several lined nudibranchs, as well as a pair of large lemon-peel nudibranchs. These were the size of a baseball, and strikingly beautiful. 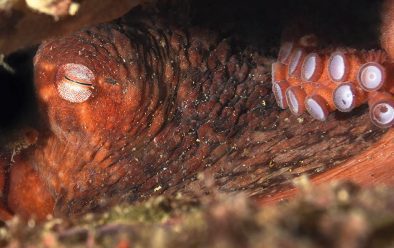 Alaska is known for huge groups of jellyfish, sometimes called a “smack”. Indeed, as we explored the second of our “undiscovered” dive-sites, we found ourselves in a soup of moon and lion’s mane jellies, and large and fearsome-looking sea nettles.

Protected by drysuits and dry hoods, the only spot on our bodies vulnerable to a sting was the area around our mouth… and of course, that’s where we got stung!

Lion’s mane jellies feed on moon jellies and we watched, transfixed, as the slow-motion pursuit by a lion’s mane of a moon jelly took place right before our eyes.

The quarry in this case evaded capture and swam safely away.

Exploring Prince William Sound is very much frontier diving. It is diving done on the timetable and to the wishes of the Alaskan wilderness.

Sometimes the salmon sharks are there, on occasion they’re not. Sometimes huge smacks of moon jellies so thick you can lose sight of your buddy a few feet away show up, and sometimes they don’t.

The visibility varies, from a few feet to 15m, and divers who don’t watch their buoyancy can easily stir up clouds of silt unwittingly.

The weather in Alaska plays a big role in what takes place on and under the water. This is the essence of adventure!

as we went on exploring the waters of Prince William Sound, other dive-sites led us to encounters with colourful decorator crabs, groups of crinoids and rafts of scallops that danced and flitted away as we approached with our cameras.

Our final dive of the trip brought us face to face with a red Irish lordfish lurking menacingly on the bottom, awaiting prey. But it was the sight of a giant Pacific octopus inside a rocky crevice that made the dive worthwhile.

As it peered at us from the safety of its lair, it seemed to be sizing us up. What were we? Were we dangerous? The octopus decided that we were… and remained safely inside its rocky home.

We decided to respect its wishes, ascend the upline to the dive-boat and begin planning our return trip.

GETTING THERE> Flights to Anchorage International Airport. From there, it’s a 5-6-hour drive to Valdez or a 30-minute flight on regional carrier Ravn Air. This has small overhead compartments, so large carry-on bags might have to be booked on at extra cost. Divers should arrive in Valdez a day before pick-up time. The only access to Ravencroft Lodge is by seaplane or boat, and a water-taxi can cost $700!

DIVING & ACCOMMODATION> Ravencroft Lodge with eight double rooms is the only dive operator in the area, alaskasharks.com. 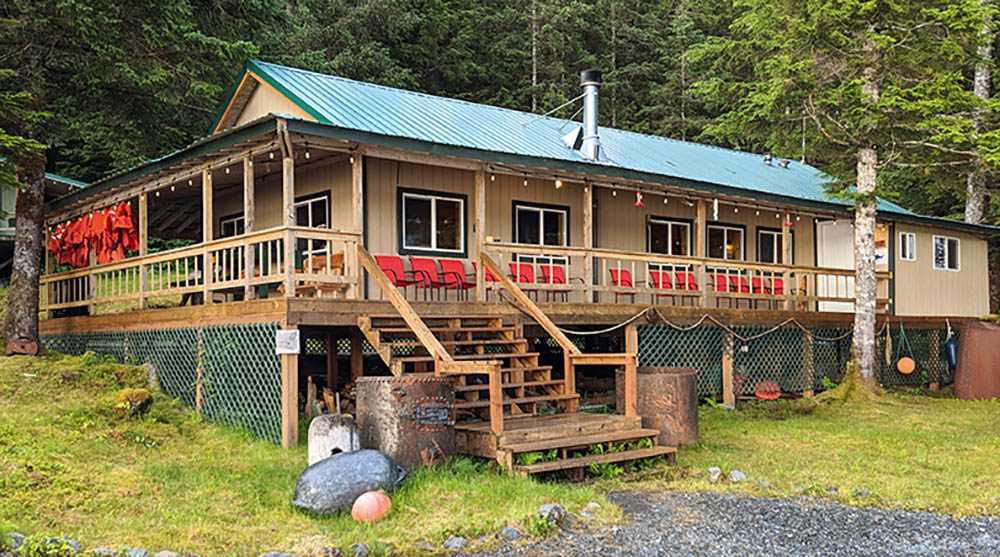 Valdez has several hotels – Michael and Christopher recommend the Best Western for its good service and proximity to the wharf for boat pick-ups.

WHEN TO GO> The only season to dive in Alaska is the short summer, generally June and July.

HEALTH> Dive safely – the nearest recompression chamber is in Seattle!

PRICES> Return flights London-Anchorage from £750. Flights between Anchorage and Valdez from $260. Ravencroft Lodge charges $4000pp for a week’s stay with diving, including transfers from and to Valdez.