GETTING COLD UNDER WATER IS body- and mind-numbing. As your hands freeze, disconnecting a direct feed that has jammed open or deploying a DSMB becomes difficult to impossible. The level of distraction as your mind concentrates on how uncomfortable you are makes it harder to carry out efficiently the mental multi-tasking any dive requires.
Your gas-consumption will also soar so, all-round, being cold is a safety issue. When asked to test a coldwater wetsuit, my job is to find some suitably chilly conditions and see how long it takes me to start shivering, or at least define some limits for how well the test suit performs.
I hate getting cold, and these tests are not ones I look forward to. Seac makes strong claims for the performance of its Libera 7mm, which I was to test in Gibraltar, where I began my diving career. Back in the 1980s my cylinder was smaller and I dived tables, not computers, so I had less time under water. I used thick jackets and longjohns, and often layered these with additional under-vests.
Around my torso, I could be swaddled in nearly 20mm of neoprene. Even then, the cold eventually stabbed through my wetsuit and would often drive me out of the water.
So I looked at this one-piece 7mm with some trepidation. I own a premium-brand 7mm one-piece that at face-value looks almost identical to the Libera. And in the Red Sea at 23° I was calling dives after less than an hour in 10m because I was shivering uncontrollably in it.
Bluntly, I expected to freeze in the Libera.

Wetsuits depend on two key design features, fit and type of neoprene. The other factors that affect how comfortable you are include depth, water temperature, gas-mix, activity level, how many dives you’ve made, their duration and time between them and your personal predisposition towards the cold.
The greatest heat-loss when using wetsuits comes from water flowing into and out of the suit. Any cold water in contact with your body will absorb body heat. Because water robs heat 25 times faster than still air, your body can rarely generate heat fast enough to replace what you lose from this flushing.
Wetsuits must try to trap water to prevent this; the challenge is to make an off-the-rack suit that can fit a range of body-builds. For example, a male of medium height might well have a beer-gut, and a medium suit still has to fit.
A very stretchy neoprene can cope with this – but it will also expand to allow water to collect. An example can occur when you climb a boat-ladder and, if your suit has good ankle-seals, the lower legs can fill up with far more water than a close-fitting suit should contain, betraying a poor fit.

The type of neoprene used in a wetsuit also makes a huge difference to how warm even a well-fitting suit will be. I and other divers brought up on wetsuits have long suspected that “modern” neoprenes used in “dive-suits” are inferior.
Newer neoprene seems to age quickly, indicated by a loss of buoyancy over just a few dives requiring far less weight to be used, and by getting cold much earlier.
Neoprenes should be selected according to the activity. Spearfishers may want a soft one that compresses easily, so it will quickly lose buoyancy during descent and require less ballast that must be physically swum back to the surface when they next want to breathe.
As they spend more time at the surface than under water, suit compression at depth and the resulting heat loss is of less concern than it is to a slow-moving underwater photographer like me, working at depth for long periods.
Suits used for surface activities such as paddle-boarding use similar neoprenes, prioritising flexibility over warmth, because you shouldn’t be in the water that much if you’re any good.
It’s neoprenes for these “soft” surface sports that seem to have infiltrated the scuba market.
Seac was keen to promote the quality of the Libera neoprene and sent me a spec sheet – very useful, because you can’t tell just by looking the type of neoprene used.
The big problem scuba-divers face is neoprene compression. It forms a heat barrier between your body and the water, and depends on nitrogen bubbles to slow loss of heat from your warm body being drawn towards the colder water.
Like any gas contained in a flexible container, pressure will compress these bubbles, which is what happens to the neoprene as we descend. Because the rubber that surrounds the bubbles is less flexible, it prevents the bubbles from compressing, in accordance with Boyle’s Law.
So a wetsuit might not lose half its buoyancy and insulation at, say, 10m, but will lose some. 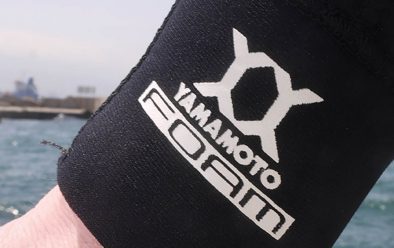 The Libera uses Yamamoto “microbubble” neoprene. Surface-sports neoprene tends to use larger bubbles, and it’s the volume and surface area of the bubble that affects compression resistance and, ultimately, heat loss.
I asked my buddy AJ, who has a PhD in chemistry, to elaborate: “It is claimed that the micro-cell neoprene has a greater proportion of gas cells and at greater uniformity,” he said.
“As it’s the gas cells that restrict heat-loss, this should mean it’s a superior insulator.
“Having smaller cells would also allow for a higher gas content without compromising the structure of the foam, leading to strength and flexibility of the material.”

The Libera is nylon-lined on both sides. The inner nylon makes it easy to slip the suit on and off, while the outer protects the vulnerable neoprene from nicks.
After the seams are glued edge to edge, the suit is dry-stitched, that is, along each inner and outer seam, without the needles ever fully penetrating the rubber. It takes longer and costs more but creates a strong waterproof seam. This prevents flushing through the seams, and makes the suit more durable and longer-lasting.
As a semi-dry, the Libera has rubber-faced neoprene seals fitted at forearms and calves. Neoprene faced with a smooth synthetic lining sticks to your skin to prevent water entering and leaving.
Some suits have zips at wrists and ankles to make it easier to pass larger hands and feet through, but I don’t seem to have that issue. Zips introduce fail-points so I prefer to do without, but it’s a trade-off.
With normal wear and tear, cuff-seals can split. Usually, at least a temporary fix can be made with wetsuit glue, whereas a zip has to be replaced but rarely breaks in the first place. 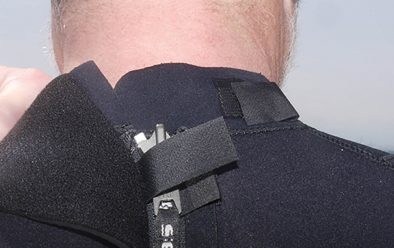 The collar and zip.

The main zip on any wetsuit is also potentially a source of flushing and heat-loss. The Libera uses an underflap to minimise this.
The usual Velcro collar-tab secures the zip-pull behind your neck so it can’t open under water, and a thumb-loop in the small of your back helps you zip your suit closed. A nice touch is a restraint for the leash, so it won’t flap around.

I carried out a dive of about an hour in 20m along Gib’s wreck-trail, swimming at a moderate speed with pauses to take pictures. At this depth the suit is compressed and the water was cold at 14°. A deeper dive will compress the suit more, reducing insulation, but then no-stop times are shorter, so it tends to cancel out.
I used another make of hood with a short collar. The inside throat area of the Libera has an unlined neoprene panel intended to dock with a matching panel on the yoke of a Seac hood. The two neoprene panels then “stick” to one another to form an effective seal to eliminate flushing.
Without that seal, occasionally I felt cold water wash against the nape of my neck, though it didn’t feel as if it was penetrating any further.
I then made a deeper multi-level dive to 28m, adding a non-Seac 3mm undervest with an attached hood that features the neck-seal design needed for a fair test.
I emerged still warm after 65 minutes, including a brief deco-stop. After each dive the shampoo I use as a marker to detect flushing was still inside the suit, an excellent sign.
The Seac Libera fitted me extremely well. Possibly, because it was such a close fit but more, I suspect, because of the type of neoprene. I was very aware that I was wearing it.
This is not an uncomfortable suit, it’s just less supple than others, and I found this reassuring – it was as if I could feel the neoprene’s density.
Water won’t pool in the legs as you leave the water. While some high-flex suits seem able to stretch like a balloon to fit almost any build, which is why they can flush water, with the Libera getting the size right will be important.

Overall, this is an extremely nice suit. Its simple one-zip design reduces fail-points, an important consideration for a diver working day in, day out. Most of all, I was impressed by its fit and the impression I had of the micro-bubble neoprene keeping me warm.
I can’t say how long it would last with sustained hard diving, but my past experience of small-bubble neoprene suits is that it’s likely to outlast “ordinary” wetsuits by some margin. Highly recommended.

Thanks to Dive Charters Gibraltar and Gibraltar SAC.