Taking Care in the Dragon’s Lair

Taking Care in the Dragon’s Lair

Underwater photographer, instructor and dive-guide CARL CHARTER has leafy seadragons on his doorstep – for many of us they’re on the bucket-list 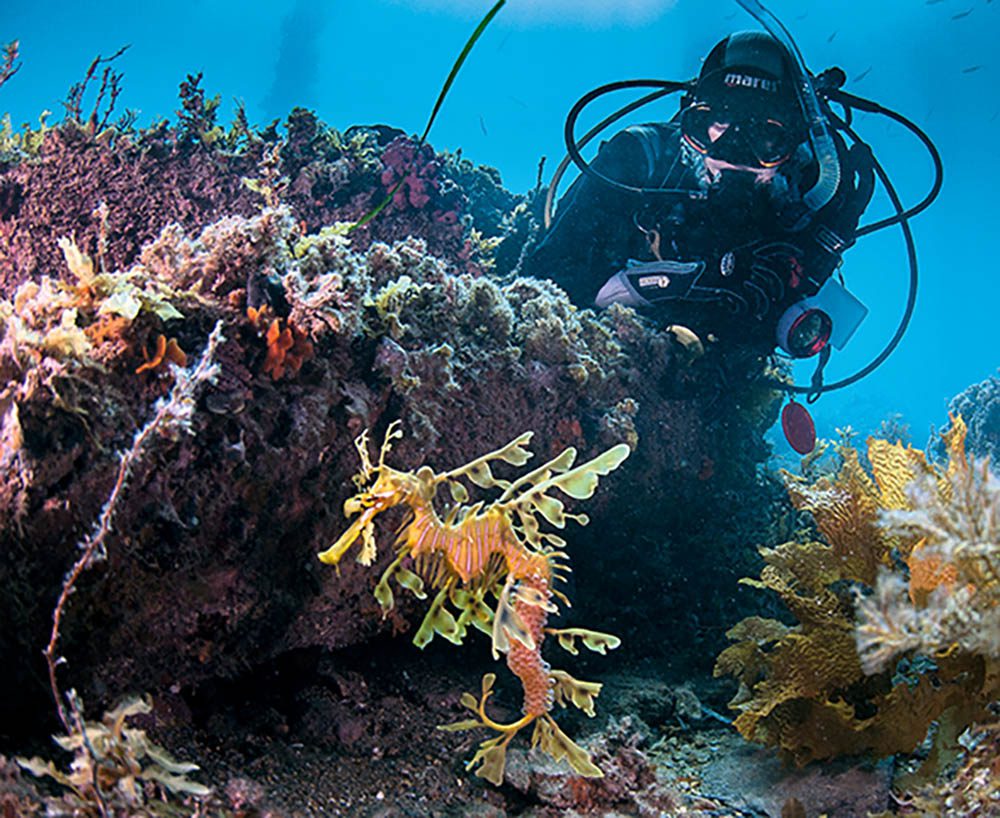 WITH A BODY COVERED in bony armour, a jaw fused into a long snout for feeding, and modified fins that look more like leaves for the perfect camouflage, the majestic leafy seadragon is a true freak of nature.

It is one of three seadragons to be found along Australia’s Great Southern Reef. The GSR straddles five states from Brisbane in Queensland down to New South Wales, Victoria, Tasmania, along the South Australian coast and up to Kalbarri north of Perth in Western Australia.

But the most flamboyant of the seadragons with its extravagant camouflage is Phycodurus eques. Leafy seadragons are found from Western Australia to South Australia, with very rare sightings in Victoria.

The best place to tick one of these majestic creatures off your bucket-list is the Fleurieu Peninsula, a one-hour drive from the South Australian capital, Adelaide. Rapid Bay is the hotspot for keen photographers from around the world to explore in the hope of spotting one of these elusive fish.

If you’re lucky, you can find a leafy seadragon cruising along the seagrass beds not far from the jetty’s easy entry-point – stairs that lead down to a dive-platform.

The leafy seadragon is fondly referred to by locals as the leafy, and is found all year round in the kelp and seagrass beds along the GSR. A protected species, it is South Australia’s marine emblem.

With a lifespan of seven to 10 years, the leafy spends much of its time day and night cruising along the seagrass hunting for and eating tiny mysid shrimp, but it always stays within a small “home range”.

In spring leafys aggregate into small schools of up to five individuals and set about finding a mate.

THE MALE LEAFY gets “pregnant” and carries the young. The female deposits up to 300 eggs into a pouch on his tail, and he incubates them for six to eight weeks until the 20mm babies are born. He can incubate more than one batch of eggs per season, too. 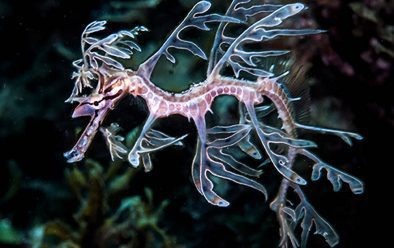 The young are left to fend for themselves, and only 1-20 babies from the initial 300 or so will survive.

These grow to 20cm within their first year and to their full length of around 43cm within two years.

Leafys are very sensitive to changes in depth. They will suffer barotrauma and die if moved vertically 2m or more when stressed. They are also very sensitive to light, so when photographing them divers need to use natural light whenever possible, and restrict flash photography to no more than a few shots per encounter.

Populations have crashed in some areas in the past, either because of suspected poaching for the aquarium trade or, more recently, pressure from large groups of divers trying to get that perfect shot.

It’s quite possible to “over-love” these delicate creatures, as more divers start to frequent easily accessible dive-sites such as Rapid Bay.

EVERY LEAFY SEADRAGON has distinctive facial markings that can be used to identify individuals. And those individuals have different personalities. One will sit in one place allowing you to enjoy its beauty, while others will be flighty, and likely to move away quickly.

So it’s important that divers respect the personal space of these creatures and stay at least 2m away when viewing them.

Don’t overcrowd them – no more than two divers should be with one at any one time – and if a leafy does start to move off, it’s time to back away and let it have plenty of room to manoeuvre.

It should go without saying that they shouldn’t be chased or touched, and divers need to be aware of fin placement and avoiding trailing gear.

With respect and good diving and photography practices, we can ensure that leafy seadragons stick around Rapid Bay jetty for divers to enjoy in the future.