Be The Champ! – Ultra Narrow Field of Focus

The eyes have it – it’s all about the eyes! It may not be suitable for everyday use, but for fish portraits that stand out from the crowd, ALEX MUSTARD explains how to achieve the sort of razor-sharp effect that’s hard to ignore

‘The larger the sensor in your camera, the easier it is to create an ultra-narrow field of focus’ 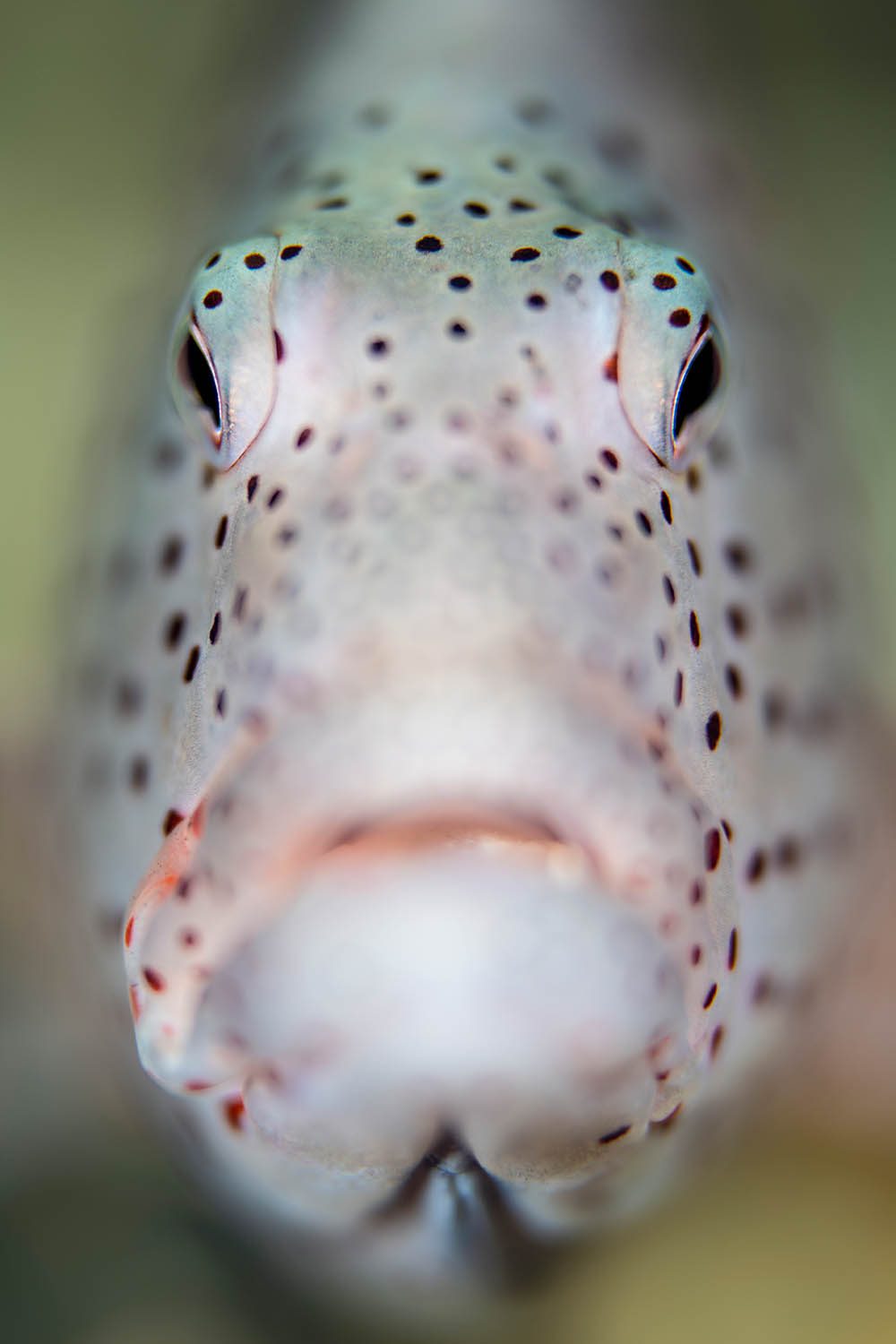 a photographer on one my recent Red Sea workshops grumbled that her striking coral grouper portrait, taken on a previous trip, had finished rock-bottom in her monthly camera-club contest.

My first response was to reassure her that the result probably says more about club competitions than anything to do with her photography.

I am a fan of camera-clubs. Like dive-clubs, they bring fellow-enthusiasts together and promote a passion for the hobby, but they can also have human failings.

And at least dive-clubs don’t have a monthly competition to determine who is the best diver!

Digging deeper, I asked the photographer if she received any feedback from the judge, knowing that many have a very blinkered view of what qualifies as “good photography”.

First up, the judge commented that her grouper was clearly shot in an aquarium, because “nobody could get such a clear image under water”.

His main criticism was that the whole subject wasn’t in focus. The judge acknowledged that the eyes were in focus, but scored the image down because the whole of the subject was not.

A point to which I objected – photography is about the image, not about following a rule like that!

Photography is indeed governed by the laws of physics and there are some rules to which we must adhere. But beyond that, the fun is not in following dogma but in breaking free. As the oft-quoted saying from Pablo Picasso encourages us: “Learn the rules like a pro, so you can break them like an artist.”

So this month’s column is all about pushing depth of field to extremes to create portraits with razor-sharp eyes.

martin schoeller is a portrait photographer, best known for his stylised, tightly framed face-shots of world leaders and celebrities. His is a style we can ape when shooting portraits of fish faces.

His close-up pictures are characterised by the subjects staring directly into the lens, and are shot with a very shallow depth of field, so that the eyes are in sharp focus and other features are de-emphasised and blurred.

He further accentuates the eyes by using soft, shadowless lighting that flattens the contours of the face. And his celebrated pictures probably wouldn’t score well with some camera-club judges, either.

In an interview with the Smithsonian, Schoeller explains that his portraits aren’t about faces; it’s all in the eyes. “Everything falls away so quickly because of the shallow depth of field. Everything else becomes secondary.

“So not only am I focusing on just the face, I’m even concentrating on it more by having everything else out of focus.”

For a really extreme, narrow depth of field portrait, set the aperture as wide as it goes. Most macro lenses offer a fastest aperture of f/2.8. But be aware that this is usually available only when the lens is focused on infinity.

_When you focus closer, the effective aperture shown by the camera is slightly less open, but will still give this razor field of focus.

the classic underwater technique for macro fish portraits typically demands a small aperture (such as f/16) to maximise depth of field.

Although, if you want an extreme look, you can consider opening up all the way, all the time.

The right gear makes a big difference. The larger the sensor in your camera, the easier it is to create an ultra-narrow field of focus.

Schoeller uses a medium-format camera, but fortunately our fish faces are much smaller than human mugs.

That said, this technique does favour those shooting with full-frame SLRs and mirrorless cameras. Crop-sensor SLRs (1.5x crop) still work well, while the M43 mirrorless cameras work well with the 60mm macro lens and smaller subjects.

Compact cameras are less suited, except for a few of the pricier models with larger sensors and fast-aperture lenses.

Next, attach a longer-focal-length macro lens, with a fast (f/2.8) maximum aperture. All three images here were taken with the Sigma 150mm f/2.8 lens on my full-frame Nikon.

Longer lenses naturally create a narrower field of focus than wider viewing optics – think how much depth of field you get when you use a fisheye. 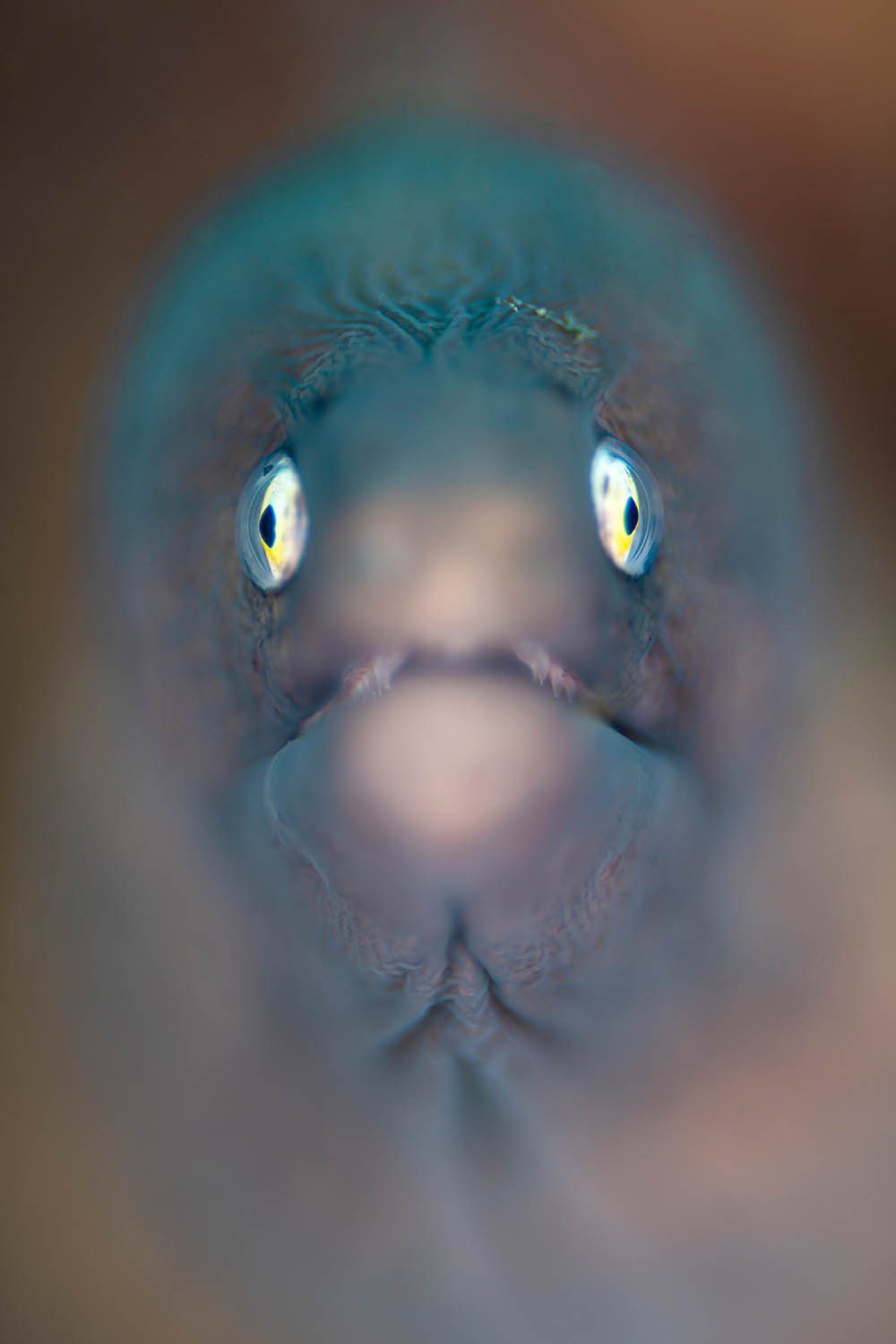 many of you might already be asking the next question. If we open the lens to f/2.8, doesn’t the camera get too much light?

Yes, you’re right! It certainly does when diving in the sunlit shallows of the tropics, so loved by underwater photographers. Also, at f/2.8 most strobes are often too bright, even at their lowest setting.

The first step is to drop your ISO as low as possible. Many cameras have low ISO settings below their official base ISO.

These don’t offer any increased image quality over higher ISOs, but they are very useful for reducing the sensitivity of the camera when shooting with such open apertures. That said, they are still not always enough.

So the final piece of the equipment puzzle is a neutral-density or ND filter. This is basically a grey filter that cuts down the light coming into the camera.

These are sold in different strengths, and I find 2 f-stop or 3 f-stop filters most useful for this type of photography.

Confusingly, ND filters are not sold in f-stop units. They have their own currency: an ND4 is a 2 f-stop, and an ND8 is a 3 f-stop.

When shooting fish portraits, especially with narrow depth of field, it is crucial to precisely focus on the eyes of the subject. 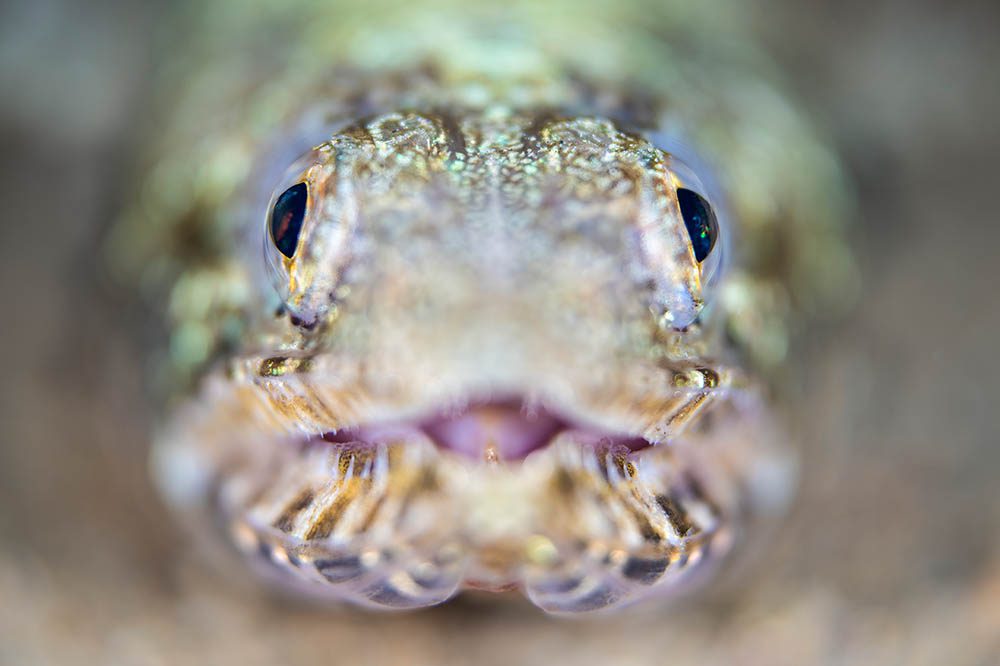 the final elements of the Schoeller-style portrait are the eye contact and lighting. Eye contact with fish is all about getting the camera right down to eye level with the subject and getting close without spooking it.

Then we just have to wait for that moment of connection with the subject to press the shutter.

Lighting should be soft and diffuse, which better suits the out-of-focus areas of the frame.

Strong shadows don’t look right here. We should use two strobes fitted with diffusers to front-light the subject.

The combination of low ISO, ND filter and fast shutter-speed allows us to quell the ambient light and illuminate only with flash, which makes the colours in the subject richer.

Schoeller’s is just one way to shoot a portrait. I’d hate to see all people pictures shot this way, and ditto those with fish. But variety is the spice of life and I am happy to have some shots in this style in my portfolio.

Photography would be very dull if there was only one way of taking a picture.

If you buy an ND4 or ND8 filter as a 67mm thread it can be mounted on the outside of the housing in place of your usual screw-on close-up lens, giving flexibility.

_Although nobody currently makes an underwater ND filter, you can just use a cheap land one, aware that it will last only for a trip or two. Avoid stronger filters, because you won’t be able to see through the lens to focus.