One of the few places in the world where whale shark encounters are virtually guaranteed is Oslob, but the site remains controversial. What would SAEED RASHID make of it?

Visitors gather for the whale shark experience. Numbers were recently limited – to 800 a day.

THE STORY GOES THAT IN 2011, fishermen in the south of Cebu in the Philippines had a problem with whale sharks eating their fish, and often killed those sharks to protect their catch.

But they soon found out that by laying a line of breadcrumbs (well, fish) the sharks could be led away from the fishing grounds.

Now able to direct the sharks anywhere they wanted, the fishermen realised that if they led them to a local bay, tourists would pay to see these normally elusive animals. News quickly spread.

Fast forward to 2018, and a huge and somewhat controversial business has built up around the once sleepy village of Oslob. Some say this practice of feeding whale sharks for public enjoyment is wrong; others argue that even though these sharks are protected by Filipino law, many would have been killed, and the feeding has also helped to bring local people out of poverty.

I had the chance to see for myself with a visit to Oslob on my off-gassing day at the end of a recent stay at Atmosphere Resort. It’s a two-hour ferry and car journey from the resort, and I had no idea what to expect.

Approaching the bay, you see hundreds of signs along the roadside depicting whale sharks, so there’s no mistaking that you’re in the right place. We pulled into the car park. There were lots of people on the beach, with coaches lined up ready to offload. It was more like the entrance to an amusement park than a wildlife experience, and made me feel a little uncomfortable, but my local guide assured me that it was very well-managed.

People try to get the best view, and sometimes losing the buoyancy aid is seen as necessary to do that.

The whale shark “experience” started with a group briefing in which we were told the rules: a life-jacket must be worn; no flash photography; stay more than 5m away from the sharks… you get the gist.

We were also given basic information about the sharks themselves, with much emphasis placed on the fact that these were sharks, not whales, as so many people apparently believe!

After the orientation, I was led to a small boat with seven other people. We were paddled out into the bay to join a line of eight other boats strung together.

Once tied up, our guide told us that we had 30 minutes with the sharks. Looking around me, I could see three other rows of similar boats, each with its own small paddle-boat rowing up and down, and food being thrown to entice the sharks.

As I wanted to be able to freedive with the sharks, I asked if I could remove my life-jacket. This proved to be no problem, so that was one rule broken already.

I slipped over the side of the boat into the water, and straight away was confronted by two 8-9m whale sharks. They swam right below me, and as I was watching these beautiful creatures go by I heard someone shouting.

I looked up to see our guide pointing behind me. I spun round to see the huge open mouth of another whale shark ram-feeding right in my face. I was being yelled at for being too close to the shark. 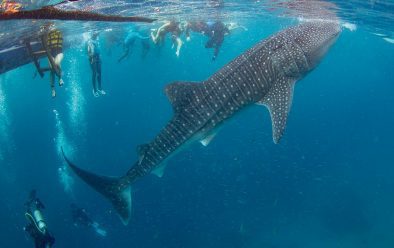 The whale sharks just get on with their snacking, but the amounts they are given would be unlikely to affect their regular feeding.

Another rule broken, but hard to avoid when food was being thrown down right on top of me. The shark was just moving up and down the line, following the trail.

Being that close to a feeding whale shark was awe-inspiring . For a moment I forgot that this was a contrived encounter. I had now moved away from my boat, and was quickly reprimanded by my guide, who insisted that I stay within my own area (seems I was a bit of a rule-breaker!).

All the food in the water was making it very murky, reducing the visibility to 15m or less. It was hard to see how many sharks were around me, but the most I counted at any one time was six.

I have never been anywhere where I could see six whale sharks at one time, so it really was an experience to remember. Looking out towards the oncoming sharks, it was easy to forget that there were more than 100 people in the bay doing exactly the same thing.

Some of my fellow-passengers chose to watch the action from the boat, but the others were in the water next to me. One was quickly scared back into the boat when the next shark passed by, until the lure of a selfie with one of these magnificent creatures became too strong.

Watching the circus unfold, I saw a guide from another boat swim over and remove the life-jacket from a guest, who was then pulled deeper under water to allow for a better shot.

For me, this was one step too far and seemed very unsafe, as the guest didn’t appear confident in the water.

I made my feelings clear, for which I just got a smile and “OK, OK!” before they carried on with a second person, although this one seemed to be a better swimmer.

This really was the influence of Instagram in action, with people desperate for the ultimate shot to “go viral” on social media.

Our 30 minutes was soon up, and I was called back to the boat. Paddling the short distance back to shore, I was more aware of my surroundings and looked to see what was going on with the other people watching the sharks.

Most of the boats seemed to have half the guests in the water and half choosing to stay on board.

Those in the water had their guides keeping a very close watch on them, and I noticed another person being told that he was too close to the sharks.

Back ashore, there were queues of others waiting for their opportunity.

My take on Oslob

Do I think it’s right? That’s a hard question to answer. From talking to experts, it seems that only about six sharks have become habituated to the feeding, with many just visiting once or twice on their migration route to other places, so it doesn’t seem to have had a significant impact on the population.

It has clearly lifted the local population out of poverty, and I was told that much of the money raised stays within the area.

It also has educational value, with many of the tourists visiting from the very countries accused of devastating shark populations through finning.

So perhaps watching these majestic fish might help to influence opinion and ultimately stop this practice.

But there’s no getting away from what is going on in Oslob. It’s clearly exploitation of wild animals, and I’ve been told that it’s only getting busier.

Do I think it’s well managed? Apart from the incident I witnessed with someone being pulled under without a life-jacket, desperate for a selfie, I think they manage the activity as best they can.

The briefing was informative, and most of the guides seem to respect the sharks.

Feeding happens for a short time in the morning only and apparently strict limits are imposed on the amount of food put into the water, because this forces sharks to search for their own nourishment as well as taking the hand-outs.

Would I do it again? No, I don’t think so. I’ve seen what I need to and it will be something I’ll never forget, but I would prefer to see whale sharks swimming spontaneously out of the blue in their natural environment.

Would I recommend this to someone else? I would say that if you want a pure adrenaline experience and you’ve never seen whale sharks in their natural environment before, then this isn’t for you, because nothing can replace a chance encounter under water.

On the other hand, if you have always wanted to see a whale shark and this could be your only opportunity, then, yeah, why not. But at the end of the day, you have to make your own mind up.

GETTING THERE> Philippine Airlines flies daily flights via Manila to Dumaguete or Cebu.

WHEN TO GO> Year-round, but the dry season runs between November and April.

PRICES> Oslob is a 90-minute road and boat journey from Atmosphere, and a half-day excursion there costs from £75, depending on group size.