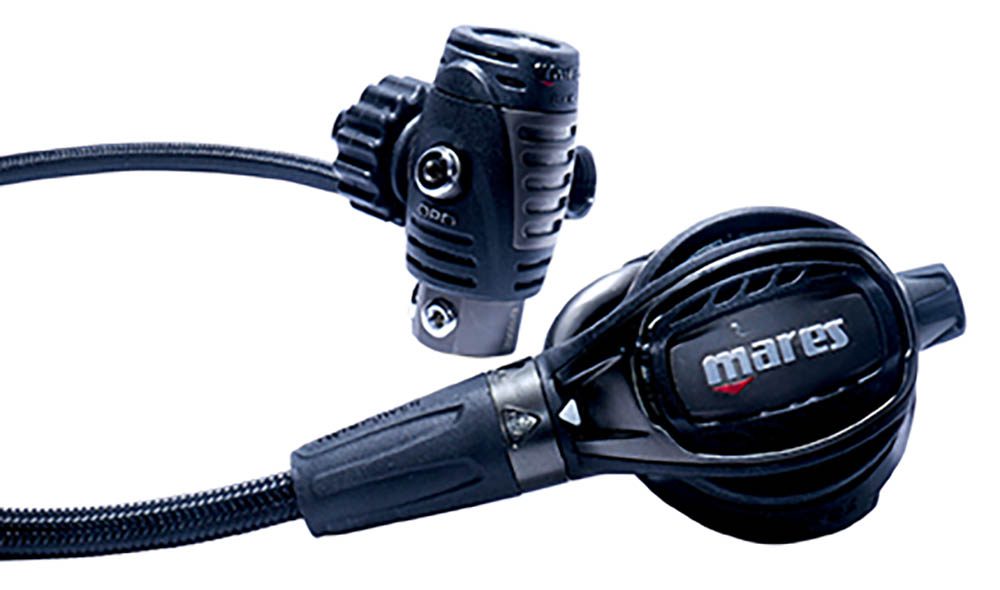 Fifty-two metres flashes up on our computers. On test is Mares’ latest Epic ADJ 82X regulator. Nick Balban, my buddy and co-tester, is thinking very seriously about taking it off the stage tank it’s on and putting it on my cylinder. And, no, Nick isn’t narked. He’s concerned for my safety.

Testing kit means that I find gaps in my knowledge and experience and try to fill them in and improve my test methods all the time. The objective of this final test-dive is to subjectively assess the reg’s performance in a near worst-case diving scenario. Sharing air, at depth, at low tank pressure.

The Epic ADJ 82X is EN250A-certified. This test is carried out by an independent agency using an ANSTI breathing machine.

Firstly, the regulator is breathed 25 times over one minute, with the volume of each breath set at 2.5 litres, to evaluate its use by a single diver. The test concludes at a simulated depth of 50m.

This meets the EN250 standard any regulator sold in the EU must meet, but attaining EN250A requires an additional test, simulating one diver breathing off the primary second stage and another breathing simultaneously from the octopus at 30m.

The first stage must supply 125 litres of gas in 60sec without exceeding a certain level of inhalation and exhalation effort, called work of breathing.

The lab test is supposedly objective, but it does have critics who suspect that some regulators bearing the EN seal of approval are actually substandard performers. On the back of the VW emissions and other scandals, such cynicism is unsurprising.

Others feel that the EN breathing requirement is set too low. The vital capacity of an average male’s lungs – the maximum volume of air you can shift in and out in one breath – is 4.5 litres, not a paltry 2.5.

However, when working hard, we breathe shallower, partly accounting for the difference. In fact it was our own Health & Safety Executive that fought for the European standard to be set at 2.5 litres rather than 2, so there was a dispute, suggesting uncertainty, even among the experts when setting the standard.

Additionally, under water our breathing efficiency is about halved at 30m, and many leisure divers not only pass 30m but do so without carrying independent bail-outs, leaving a buddy team dependent on an octopus in conditions untested by officialdom. That’s the reality – I do it myself.

So EN250A needs to be seen as a minimum and, arguably, inadequate standard. I believe it’s all too easy to stray outside that safety envelope.

Accordingly, Mike Ward and I aren’t meant to take manufacturers’ claims on trust. DIVER has in the past uncovered serious equipment concerns, such as exposing the inaccuracy of depth gauges in cold water that could have led divers to get bent. Our job is to look for flaws in test kit and report them.

That’s why Nick and I were trying at 52m to outbreathe the Epic ADJ 82X – it’s called “beating the lung”.

The Epic ADJ 82X title refers to the pairing of Mares’ Epic ADJ second and 82X first stage – you can mix and match these with other Mares options to get lower-priced combos.

Mechanically, the 82X is a balanced-diaphragm type, a design associated with high performance. It’s heavy duty, in fact butch.

The test unit had a 300 bar DIN fitting. The handwheel made for an easier grip than other DIN valves I’ve used, so was easy to mount and unscrew from the tank with wet hands.

The dust-cap screws on rather than just push-fits, so is very secure. A yoke fitting is available, though I would prefer to buy the DIN version and carry a screw-on adapter if required.

A built-in device automatically closes off the inlet when the reg is depressurised, so water shouldn’t get in should the first-stage be dunked in a rinse-tank uncapped.

Two high-pressure ports sit either side – I attached a hosed pressure-gauge and a computer transmitter to them. 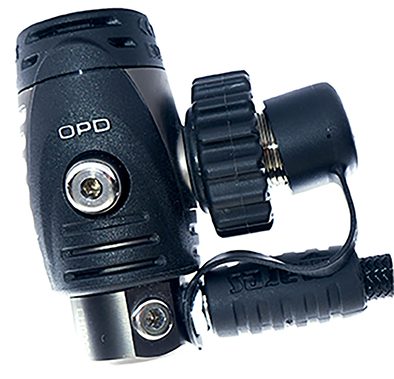 Four medium-pressure ports are mounted on a swivel turret, helping the hoses align for your preferred routeing. I used these to feed my primary second stage, Mares Loop octopus and two direct-feeds for my BC and drysuit. Swivel turrets are uncommon on balanced-diaphragm models, so it’s a praiseworthy touch from Mares.

A fifth mp outlet sits on the end of the first stage. All those ports make the 82X highly configurable for back- or side-mounted cylinder use.

But they are inclined to get harder to breathe from at low tank pressures, a situation in which a diver sharing air via a safe second is likely to end up.

Balanced first stages have been around for decades, so improving ease of breathing, especially during periods of high demand such as sharing at great depth, is all about refining and tweaking the engineering.

When you inhale, the pressure drops in the first stage, and there can be a conflict when there are multiple simultaneous demands for air, such as for inflating your BC, drysuit, DSMB or lift-bag.

In theory inhalation resistance could increase, so manufacturers sometimes prioritise flow to the port feeding the primary second stage.

Reflecting Mares’ intention to sell this regulator to deep-diving technical divers as well as recreational ones, it claims improved flow rates to all the mp ports, which should mean that you can rearrange the layout of your hoses without compromising ease of breathing.

Passing air from your tank through your regulator drops the pressure in two stages to reach your lungs. This also causes the air to supercool; its temperature can easily be 10° below that of the surrounding water.

Moisture in the air in the tank can freeze and form ice particles that can jam the moving parts, though more common is ice forming on parts of the regulator mechanism in direct contact with the water.

The Epic ADJ 82X is EN-certified for use out of the box in water down to 4°C, and for those who dive under ice Mares offers an additional silicone-filled coldwater diving kit. This isolates the first stage’s external moving parts from water and snow that could freeze and block the mechanism.

The first stage links to the second via a braided hose. Braiding increases the surface area of the hose, allowing it to draw heat from surrounding water and warm the incoming air to reduce the risk of icing in the second stage.

It’s very supple, and coils easily for packing. It’s also easy on your jaw as you move your head, helped by the play in the first-stage swivel.

It feels tough, as does the second stage itself. Its casing is PVD-coated metal. This minimises the icing hazard introduced from moisture in the diver’s exhaled air by acting as a heat exchanger, much like the hose.

The second stage is pneumatically balanced, which minimises cracking effort – the first part of the inhalation cycle that opens the second-stage valve to get the air flowing. An easily turned knob adjusts inhalation effort.

Some regulators can freeflow when facing into very strong current and a cracking control can stop that.

That said, I often dive in swift water and have never had that happen. I’ve owned four top-of-the-line regulators with inhalation-adjustment controls, and always set them for minimum breathing resistance.

Detuning them only makes it harder to inhale, which uses up more air as you work harder to breathe. Besides, who buys a Ferrari to drive it like a Citroen 2CV?
Most Mares second stages feature a small external tube. Ed Bulmer at Mares tells me ruefully: “Tekkies say what a great idea, having a D-ring built in so you can easily clip off your reg!” 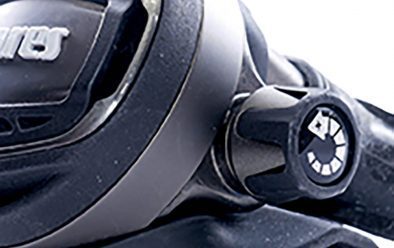 In fact the tube directs air into the second stage to ease inhalation, and dates back more than four decades to the iconic Voit MR series regulators of the 1950s and ‘60s.

Eventually Voit teamed up with Mares, which embraced its advanced regulator technology, including this tube that creates a venturi effect.

Regulator second stages have a flexible diaphragm that collapses when you inhale. It presses down on a lever that, in turn, opens the second-stage valve to let breathing air in. A venturi routes a jet of air through the second stage, creating a vacuum that keeps the diaphragm depressed and air flowing with far less effort on your part.

Most regulators have a small switch that turns off the venturi to stop the second stage freeflowing when out of your mouth. Mares has combined this switch into the Epic ADJ hose protector. With a lot to grip, this makes it extremely easy to use, even with mitts. 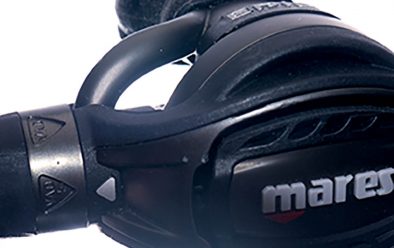 The venturi switch and venturi tube.

There are two click-stopped positions – pre-dive and dive. My one caution would be that if you pass this to an out-of-air diver while holding the hose-protector, you might twist it to the pre-dive position. The increased resistance could be unsettling for a casualty.

The regulator is suitable for use with 40% nitrox.

Pass through the 30m mark, and air usually seems to thicken up and drag as it enters your lungs. At 50m it is six times denser than at the surface and you need to move far more of it through your airways to breathe.

Ed told me I might prefer this in the shallows, the suggestion being that the reg might throw too much air at me, but it didn’t. This regulator is always on its best behaviour.

The second stage is very comfortable in the mouth, clears easily, even when inverted, and the exhaust-T does a fair job of diverting bubbles from your field of view. It’s easy to purge, even with gloves

So to that crunch test. Nick and I took the Epic ADJ 82X down on a 5-litre/200-bar cylinder, leaving me to make the main dive on a rental reg and a 15.

Our reasoning was that if we froze the Epic ADJ 82X, or anything else happened to cause it to freeflow, having it on my main cylinder would dump all my air, and the 5-litre wouldn’t get me through the stops on the way back.

At 52m I placed my hands against a rock and began to fin as hard as I could. With my respiration rate soaring, Nick, also working hard, came onto the Mares Loop octopus – with absolutely no discernible increase in breathing resistance from the Epic ADJ primary second stage at all.

I continued for 25 breaths. As expected, the real problem with breathing that hard was not with the Epic ADJ 82X, but the limits of my own body. We nearly emptied the 1000 litres in, I guess, 2-3 minutes, approximating a breathing rate peaking at around 350 litres per minute.

Nick could see the pressure gauge diving towards zero with each inhalation. During the exhalation cycle it bounced back, suggesting to me that the tank-valve was struggling to pass air at the rate it was being demanded.

But near-emptying the stage-cylinder while we were both breathing heavily from the Epic ADJ 82X confirmed its excellent ease of breathing, even at low cylinder pressures.

I assume this also bears out Mares’ claim to have engineered high flow-rates to all the mp ports, not just the one feeding the primary second stage.

Nick had been suspicious of the rental valve I was using and concerned as to whether I’d be able to get enough air from it when I transferred back to it.

That’s when he had thought he might put the easy-breathing Epic ADJ 82X onto the spare outlet on my cylinder valve!

He didn’t need to do that, but I was still panting by the time I got back to 30m a couple of minutes later.

I made eight dives using the Epic ADJ 82X, all over 40m. It’s damn near flawless. Highly recommended. Thanks to Native Diving, Lanzarote for its test support.