NIGEL MARSH & HELEN ROSE travel halfway around the world to see a single shark species in Gran Canaria, and in the process find a marine reserve top-loaded with life. From the UK, it’s a mere hop by comparison 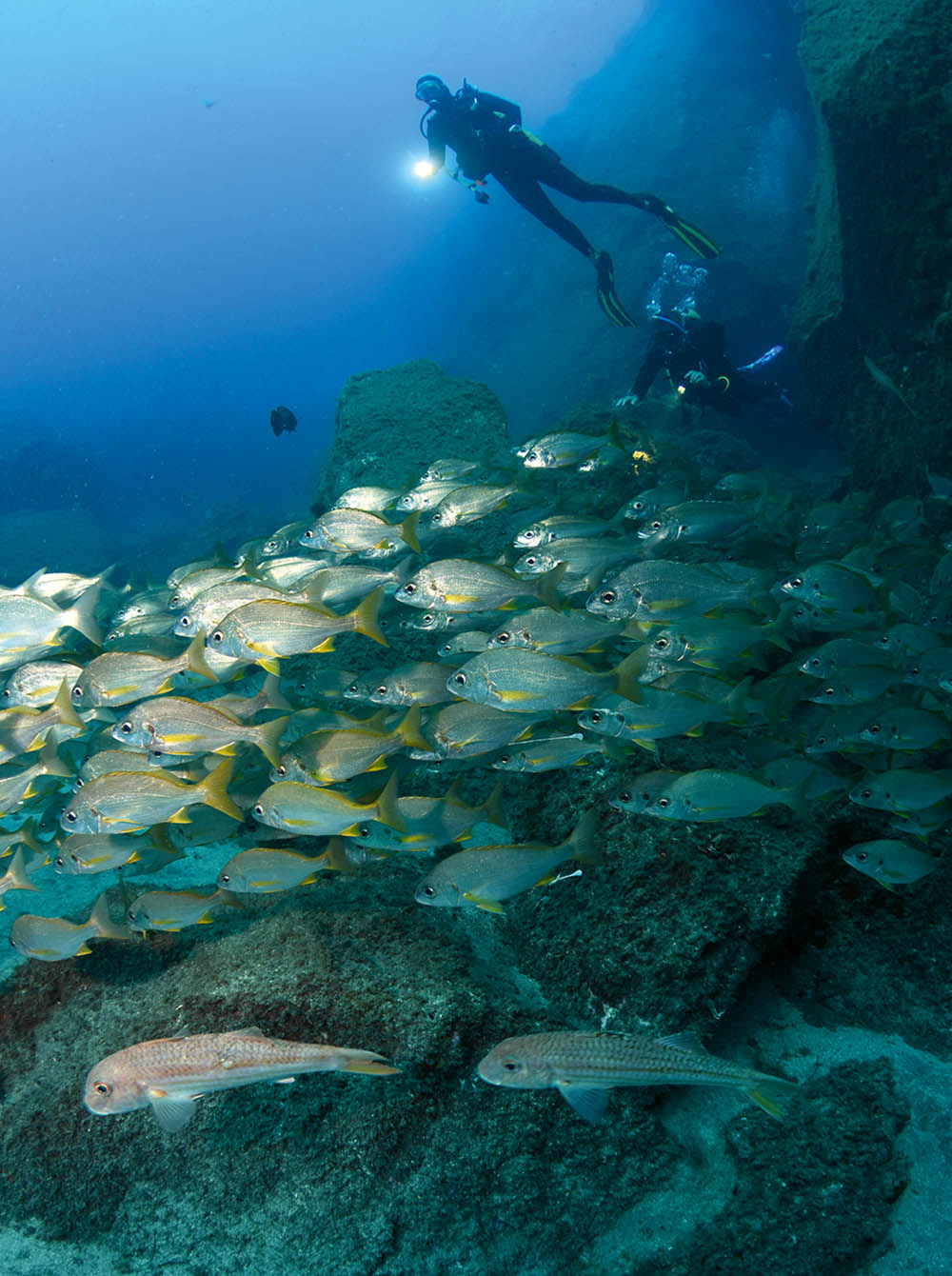 Immense schools of fish are regularly spotted in the marine reserve, including bastard grunt.

THE CANARY ISLANDS are a dive-holiday destination that I never thought I would visit. Living in Australia, I didn’t know much about these rocky islands, even though they feature in what was one of my favourite movies as a teenager, One Million Years BC.

It wasn’t until I became a diver that I learnt anything about the Canary Islands – mainly that they were popular with European divers. But located on the far side of the planet as they were, even the thought of Raquel Welch strutting across the terrain in her fur bikini couldn’t sell the destination to me.

My opinion changed several years ago, when I heard that the islands are the best place to see common angel sharks. With a great passion for sharks, I knew I had to get there one day to encounter this critically endangered species.

My chance finally came last September, when a friend asked us to join her on a special trip to Spain and Morocco to celebrate her 50th birthday. I quickly negotiated an extra week in the itinerary so that we could dive the Canary Islands.

THERE ARE DOZENS of places to dive in this mid-Atlantic island group, and countless dive operations, but I knew straight away where I wanted to go – Arinaga on Gran Canaria.

Last year I co-wrote a shark book with Andy Murch, and he had recommended Arinaga as the best spot for common angel sharks. He put me in touch with Brian Goldthorpe, owner of Davy Jones Diving, and we organised five days of dives. 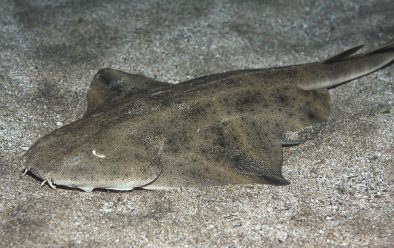 Nigel and Helen had travelled halfway around the world to see it – a baby common angel shark.

All the diving off Arinaga is done in the El Cabron Marine Reserve, and our reesearch showed that there was a lot more to see there than angel sharks.

We also discovered that September is not the best time for angels, as they prefer the cooler water temperatures in the winter months, but with the trip all booked we couldn’t change plans just to suit my desire to dive with them.

Finally arriving on Gran Canaria at night, we checked into our apartment and didn’t get to appreciate our surroundings until the next morning. Arinaga is a small beachside town, but by no means a picture-postcard destination, with its rocky shoreline and grey-sand beaches surrounded by a desert-like landscape.

As divers, however, we could see the appeal straight away, the rocky terrain dropping into very clear water.

Picked up by Brian after breakfast, we completed our paperwork and sat through the briefing about diving in the marine reserve. He explained that it contains some dozen dive-sites, though several can be covered in a single dive. He also explained that it’s all shore-diving, with entries and exits over the rocks or from the beach, depending on the site.

With the gear loaded in Brian’s car, we headed 15 minutes down the road to the reserve. The scramble over the rocks at Table Top wasn’t too difficult, even carrying a large camera system, and once in the water we were surprised to find the visibility close to 30m.

FINNING OVER the rocky reef, we were quickly captivated by the local fish species – the pretty Mediterranean parrotfish, the cute Guinean pufferfish, the colour-changing Atlantic damsels and the very inquisitive learned rockfish. 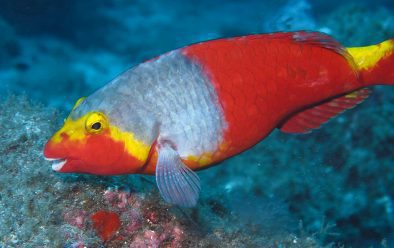 The most colourful fish off Gran Canaria are Mediterranean parrotfish.

There were also numerous species of sea bream, in schools and solitary, including zebra, white, striped, saddled, red-banded and common two-banded varieties.

Following Brian over the rocky reef, the small boulders in the shallows quickly gave way to a series of gutters and walls dropping to the grey sand at 20m.

This was the area I was looking forward to exploring, because sand is where angel sharks live. These ambush predators spend most of their time hidden under a layer of the stuff, which can of course make them difficult to find.

The sand looked barren at first glance, but we soon spotted soles, flounders, razorfish, lizardfish, pufferfish and cute starry weavers. Also on the sand was a colony of brown garden-eels, but they would quickly bury themselves before we could get close with the camera.

Cruising over the sand, but staying close to the edge of the reef, we came across a school of red porgy, then a yellow sting ray and finally a small African cuttlefish. We also saw several spots where angel sharks had been hiding in the sand but, unfortunately, that was it.

Swimming back over the rocky reef, two things struck us as highly unusual – the fireworms and the isopods. Fireworms, also known as bristleworms, are generally active at night, and even then they are only occasionally seen, but on this dive we had noticed more than a dozen crawling over the rocks and algae.

Even stranger was the number of isopods, with every second reef fish having one or more of these blood-sucking parasites attached. We were to repeat this unusual observation at every site we dived.

Of course, other invertebrate species were to be seen, including cleaner shrimps, arrow-crabs, anemones, seastars, sea-cucumbers, sea-hares, sea-slugs and octopuses.

Exploring a series of ledges and caves, Brian pointed out dusky and island grouper, glasseyes, cardinalfish, scorpionfish and trumpetfish.

But the highlight of the dive came near the end, when Brian spotted a tiger moray eel. There are several moray species in the marine reserve, but this is the most spectacular, with its yellow and brown skin patterns and a mouthful of over-sized teeth.

We didn’t find an angel shark, but this dive at Table Top was a great introduction to some of the 400 species to be found in the El Cabron Marine Reserve.

After lunch we dived a site called Two Caves. Once more the fish life was impressive, with schools of bream, goatfish and grunts covering the reef in places, and also plenty of caves to explore. In one cave was a tiny European locust lobster, while in another a round sting

Other caves were home to bream, grouper, arrow-crabs and a slipper lobster. Once more we spent time on the sand, looking for an elusive angel shark, but without luck.

We did see a few yellow sting rays, but missed the spiny butterfly ray that other Davy Jones groups saw. Brian later informed us that they see some 10 species of ray in the marine reserve.

EXPLORING LEDGES, caves and gutters we found octopuses, sea slugs, pufferfish and a rare yellow island grouper. Brian searched the reef for the resident common seahorse but, like the angel shark, it eluded us. 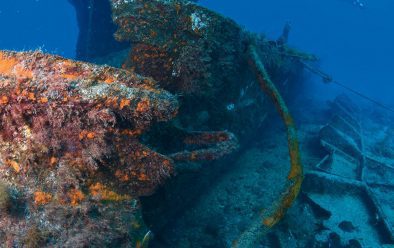 Instead we found groups of hairy blennies that must have been ready to mate, because they were fighting.

We explored caves, walls, gutters, seagrass beds and vast expanses of sand. We saw plenty of reef and pelagic fish, sting rays and invertebrate species, but still no angel shark. We even did a day-trip to the southern end of Gran Canaria, with Brian organising two boat-dives with Canary Island Adventures out of Taurito.

The first dive on the compact Cermona II shipwreck was impressive, because it was overflowing with fish.

Resting in 20m the wreck has broken open, and is home to trumpetfish, grouper, parrotfish, moray eels and schools of bream, grunts and barracuda.

During the dive we were also buzzed by a submarine full of wide-eyed tourists. It was like being in some bizarre animated Beatles film-clip, with this yellow submarine following us around.

The second dive wasn’t as good, exploring a rocky reef and sandy plain at Perchel. While the visibility was fine at around 20m, marine life was noticeable by its absence – one sting ray, one octopus and a sparse population of reef fish.

It really made us appreciate the rich species diversity of El Cabron.

WITH THE ANGEL SHARKS still eluding us, Brian suggested a night-dive as our last hope, because the sharks are more active at night when they feed.

Heading over the sand we spotted a few broadtooth conger eels emerging from their daytime hideout, a pretty tube anemone and sleeping starry weavers, but a white-spotted octopus was a great find.

These orange cephalopods live in the sand and are seen by divers only at night. We shot countless images as the octopus slowly crept across the seabed.

Exploring the sand, I waved my torch back and forth in the hope of lighting up an angel shark. Then, suddenly, I noticed an eye glinting in the distance.

Racing over to the spot, I could see that something was buried there. Suspecting that it was only a fish, I waved some sand away and, to my surprise and delight, a common angel shark wriggled out of the sand and swam off. But this was no adult, which can grow to 2.5m long, but a baby, less than 30cm long.

Small as it was I was overjoyed to have finally seen one, and shot a range of photographs when it settled on the sand again. Brian has been working with researchers to study these critically endangered sharks, and informed us that the females give birth in June and July, so this small shark was only a few months old.

We had a wonderful time diving the El Cabron Marine Reserve. This part of the Atlantic Ocean might not have the rich species diversity to which we are accustomed in the Indo-Pacific region, but its own range of species are just as precious, and very well represented.

GETTING THERE> Budget airlines operate direct flights from the UK to Las Palmas airport on Gran Canaria. 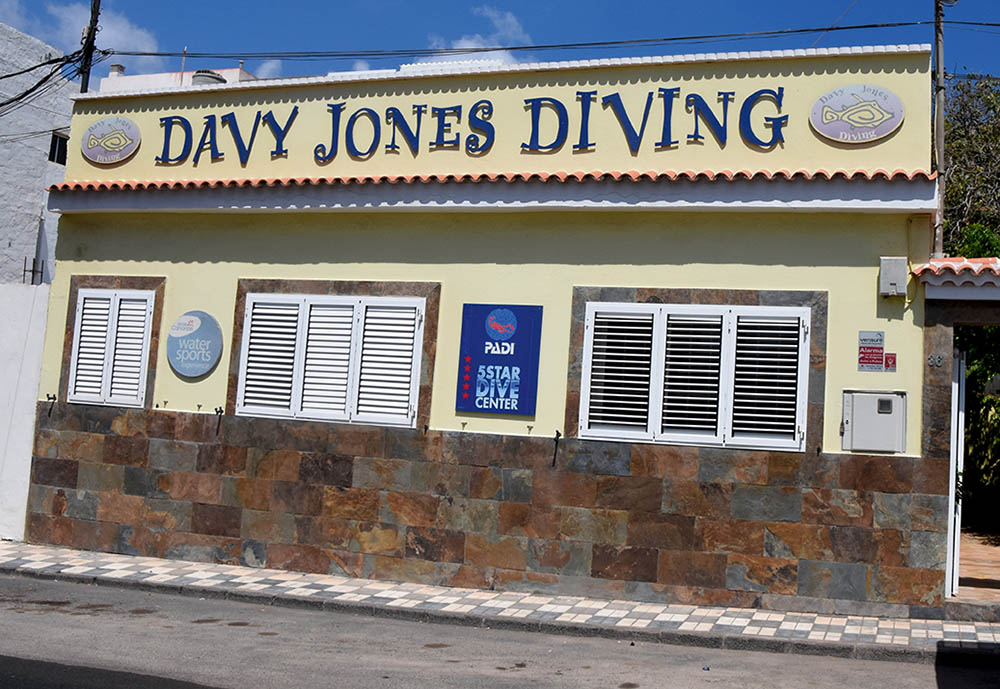 ACCOMMODATION> Self-contained apartments are the best accommodation option in Arinaga. Nigel & Helen stayed at Seven Islands Aparthotel, close to the diveshop, which can organise bookings, or go to playadearinaga.wordpress.com. If you prefer livelier holiday resorts try Playa del Ingles, Maspalomas or Meloneras, with accommodation from apartments to 5* hotels.

WHEN TO GO> Year-round the islands stay mild, but for common angel shark sightings winter is best. Water temperatures vary from 17 to 23°C, and vis from 10-30m or more.