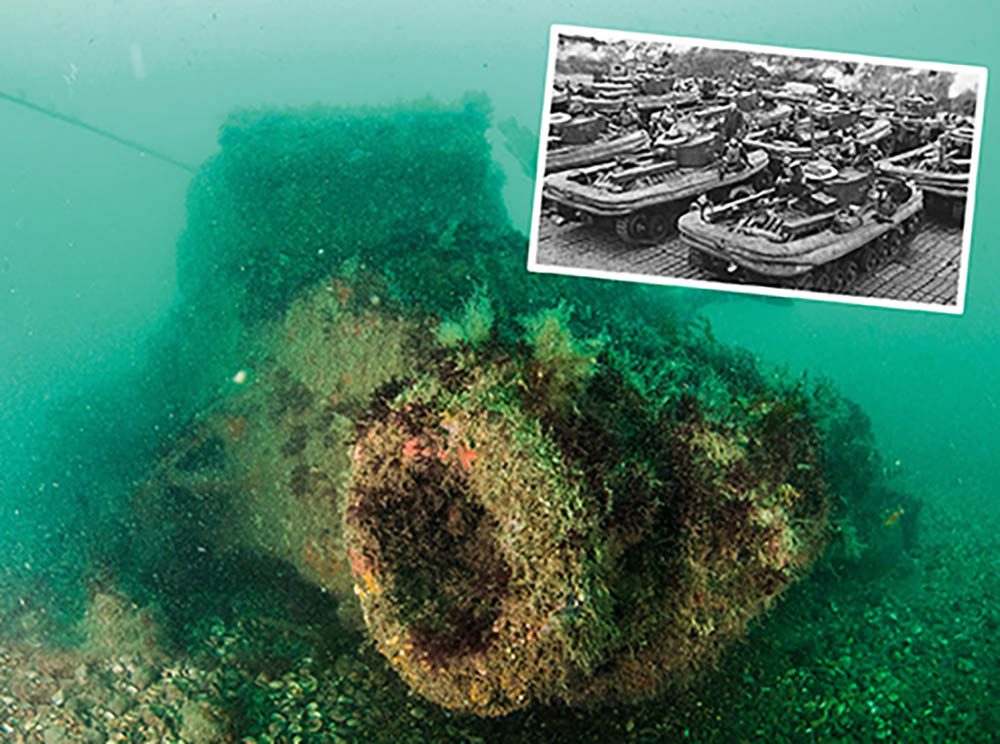 One of the Valentine tank wrecks in Studland Bay. Inset: Thirty-two tanks took part in Exercise Smash in 1944.

ON THE MORNING OF 4 April, 1944, a fleet of landing craft approached the Dorset coast, signalling the start of Exercise Smash.

For the next two weeks the beach at Studland Bay, chosen for its likeness to the beaches of Normandy, would see repeated aerial and offshore attacks.

Live ammunition bombarded the bay as the rehearsal for the impending D-Day invasion took place, with the aim of making the operation as realistic as possible for the regiments involved.

The exercise was so important that in one of the later phases it was watched by King George VI, Winston Churchill, the USA’s General Eisenhower and Field-Marshal Montgomery.

Three miles from shore, two squadrons of amphibious Valentine tanks were launched into the water, ready to rehearse their role in the forthcoming invasion. But because of unforeseen adverse weather conditions, seven of those 32 tanks never made it back to shore that day, costing the lives of six crew-members.

Almost 75 years later, two of the seven tanks remain intact on the seabed, having survived the consequent events of the war, as well as natural decay.

Now a popular dive-spot, the surviving tanks lie as a memorial to an operation that might well have altered the course of World War Two.

DESPITE THE IMPORTANCE of these wrecks, little research had been undertaken until the embers of the Isle of Purbeck Sub Aqua Club (IPSAC) uncovered their passion for diving with a purpose. In 2017 they initiated a project to survey the tanks with the aim of creating an archive and exhibiting their findings in honour of the 75th anniversary of Exercise SMASH this year.

IPSAC members have worked hard to bring to light new information about what was a “top secret” operation. By recording, and developing sketches from their fieldwork, they were able to build site-plans of the seven tanks, and to document accurately their locations in the bay.

“The tanks were often considered just a second dive or something for novices,” says Nick Reed, Project Lead on the Valentine 75 Project. “However, feedback from local dive-charter operators is that following the publicity our project has given to the tanks, people are now requesting to go diving on them. 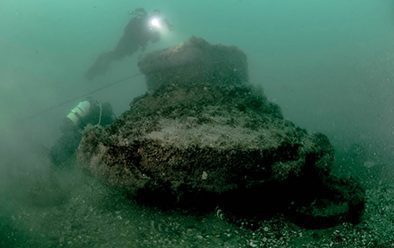 “It’s been a major achievement of the project to make people aware of the tanks’ history and the contribution they made to WW2.”

From the attention the project received in the media, relatives of the men involved in Exercise Smash came forward, allowing the club to put faces to the names of those who had lost their lives.

“So far, we’ve found photos of four out of the six, and it’s been really sobering to see how young they were,” says Reed. “They weren’t battle-hardened veterans, they were simply young men in their late teens and early 20s doing their duty.”

In an uplifting twist of fate, members were also fortunate enough to hear the moving story of the one remaining survivor of the exercise, Albert Price.

Price was only 19 at the time of the exercise, having lied about his age to volunteer, and remembers being rescued from his fallen tank – as well as the events that followed during the D-Day landings in Normandy six weeks later.

Reed describes interviewing Price as the highlight of the project. “It was a real privilege to meet this amazing gentleman and hear his story,” he says.

“When we visited him we spent a spellbound couple of hours listening to his experiences. It’s hard to comprehend what he went through at the age of 19, and the way he told the story was so matter of fact.

“It really brought home to us the debt of gratitude we owe his generation.”

OVER THE COURSE of the project, the IPSAC team have not only revealed the buried history of the exercise but also uncovered the stories of the men who sacrificed their lives, and commemorated their memory by reinvigorating their enthusiasm for purposeful diving.

For this reason, the Valentine Tank 75 Project has received the Adopt a Wreck Award from the Nautical Archaeology Society (NAS).

“Winning the Adopt a Wreck Award is a real validation of the hard work and effort club-members have put into the project,” says Reed. “Taking part has been a real joy and has given the club so much. Finding out new things is addictive, and you want to go on and find out more.”

“As the NAS motto says, discovery is just the beginning.” He accepted the award alongside fellow IPSAC member Keith Coombs at the NAS “Building a Future for Our Maritime Past” annual conference in Newport at the end of 2018. 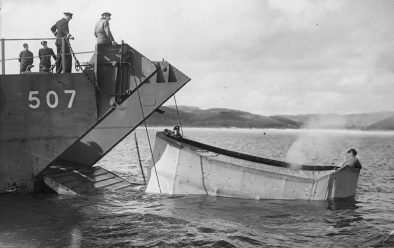 One of the tanks deploying from a landing craft.

The Adopt a Wreck award is made each year to the person or group that has made the most significant contribution to archaeology and research through the NAS scheme. It is designed to encourage dive-clubs and the public to be active in recording the sites they enjoy visiting.

While it’s most common for clubs to adopt shipwrecks, other types of wreck such as planes, tanks or maritime infrastructure can be adopted. And the sea really isn’t the limit, because on land there is a range of harbour works and buildings with nautical connections, coastal habitations, hulks and other material of archaeological interest that could qualify.

Since the scheme’s launch in 2003, clubs and individuals all around the UK have adopted sites. Paul Barnett, Chairman of the Friends of Purton, claimed the award in 2007 and says that receiving it for work on the Purton Hulks “remains a very fond memory, which I look on as a major stepping-stone in the long journey to the site’s formal recognition as one of national importance”.

In 2015 the calibre of applications was so high that two winners were announced. Nigel Braybrooke (right), Project Co-ordinator for Severnside Sub-Aqua Club, had been diving the wreck of WWI cargo ship the Baygitano and wanted to “bring the Baggy to life”.

“The highlight was being asked to present our project findings in front of the society’s President Dr Phil Harding and our NAS peers,” said Braybrooke. “Our winning of the award has encouraged other clubs to start their own projects, and will help continue the recording of our maritime heritage before it disappears.”

To learn more about the Adopt a Wreck Award or to apply, go to nauticalarchaeology society.org/adopt-a-wreck-award