What makes clownfish such excellent photographic subjects? RICHARD ASPINALL finds the answer in their host anemones – and in biology 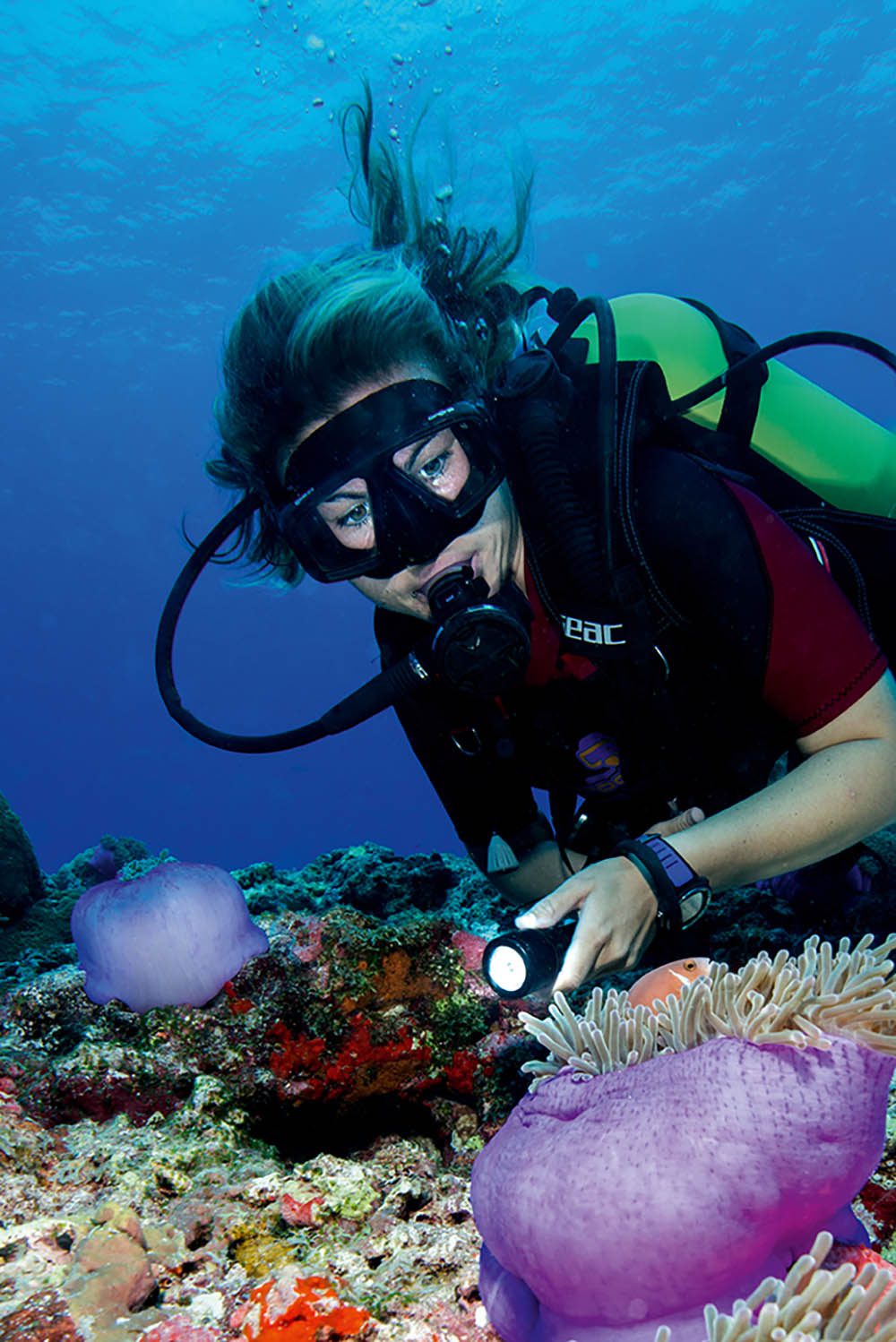 CLOWNFISH ARE AMONG the most beloved fish of the seas; popular with divers, especially underwater photographers, and of course the wider public, largely due to the animated antics of one particular fish.

As a photographer I’ve spent a fair amount of time with these charming and charismatic characters. In fact, it might be a certain anemoneful of clowns that gave my photography the boost it needed.

Imagine the realisation that your camera, sealed in its housing, is not as waterproof as you’d been hoping.

I was in Mauritius, shooting rare and endangered species from parakeets to skinks, and the Mauritian clownfish was on my list, I was one Nikon body and a macro lens down, but at 2am I hatched a plan to wedge a subtly different Nikon into my now dried-out housing.

I’d have to jury-rig the flash, and then I’d have the ability to use autofocus and fire the trigger but that would be it – if the housing didn’t let me down.

Clownfish are useful subjects for fish portraits – get the eye in clear focus, and you’re halfway there.

Next day, I tentatively dropped into the Indian Ocean waters, descending like a novice, gently, gently to a shallow reef. I’ve never been so nervous under water.

Everything seemed OK. The clear acrylic of the housing remained clear, with no dirty water sloshing around inside it – seawater and electronics mix to form a horrid brownish colour – and there was a large anemone, with a slightly greenish hue to its tentacles and a vivid red skirt.

Eyeing me from within those sting-laden arms was my quarry, Amphiprion chrysogaster. I fired repeatedly, filling my memory card with shots of each fish, and mourning my macro lens left full of salt water back on land.

Still, I had some shots and I’d begun something of a love affair with these ebullient little fish that, five years later, shows no sign of abating.

I WROTE UP THAT STORY, adding the rest of the details, described the fish and how they would bully their way around the reef from anemone to anemone, while keeping out of range of a lionfish that hoped my presence would spook them onto its menu. Remarkably, an editor, DIVER’s Steve Weinman, said “yes”, and I became a published underwater photographer and rather chuffed with myself, starting one of the most rewarding chapters of my life.

Since then I’ve photographed perhaps a quarter of the recognised species of clownfish – there are 30, but expect this figure to change as further studies refine their taxonomy. I have also learned a little more about their biology, from their practice of changing sex to their defining trait – their alliance with anemones.

Anemones are intriguing animals. Stuck to rocks, they appear innocent and flower-like, yet they can sting, kill and engulf unwary fish with ease. In the middle of their disc of tentacles hides a cavity we can call a “mouth”, yet it performs many more functions, including dispersal of gametes (sperm and eggs) as well as expelling waste – the indigestible bits of reef fish!

So how can clownfish, and a limited number of other fish species such as domino damsels, be so intimately associated with voracious and deadly predators?

The answer is mucous. Clowns have thick mucous layers to protect them, and seem able to “borrow” the anemone’s own mucous to mask their appearance from their host. There is some evidence that the clowns’ mucous has a distinctive chemistry that alerts the anemone not to sting.

The anemone derives a lot from this relationship as well. Some recent studies indicate that microbes might be shared between the fish and anemones. 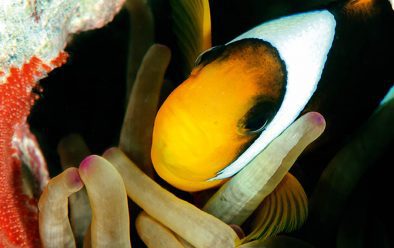 This Red Sea fish (A bicinctus) is guarding its bright red eggs, but its anemone host has retreated into a crevice in the rock, exposing them. Anemones tend to stay in one place but they are capable of slow movement, using their muscular attachment disc.

Not only do they protect the anemone from predators, but their activity can increase the flow of oxygenated water to the anemone, which can even make use of the fish’s waste products. Some observations of clowns in captivity suggest that the fish actually feed their hosts, but it may be that the fish have messy eating habits, and occasionally lose a mouthful.

To clownfish an underwater photographer is a predator, and their stoic ability to stay put and even make brief lunges towards a camera is proof of their incredibly strong relationship with their host. I can always count on a clownfish to provide me with a good shot, but their tenacity seems to vary between species.

The Red Sea clown is an ebullient species that will nip your fingers if you’re a diver who enjoys that sort of thing – I try to annoy them as little as possible. Being such a tough animal, it’s easy to approach as it hunkers down in its anemone home, between brief sorties made in your direction in the hope of seeing you off.

SOME SPECIES are quite skittish, and will hide away from you on the far side of the anemone, so you have to chase them around their home with little success.

With these species a macro lens is less useful, and it might be best to shoot them with a wider lens and capture the anemone in full, showing this mutualistic relationship in its totality.

In this scenario, the clownfish/anemone symbiosis becomes a single photographic subject, and you can exploit the ability of wide-angle lenses to focus very close to a subject.

The slightly awkwardly named close-focus wide-angle technique could have been invented for anemones and clowns.

There are a few things you need to consider with such shots. Firstly, you’ll get close to your subject and it’s easy to damage coral and other creatures on the reef, so you need to take care. 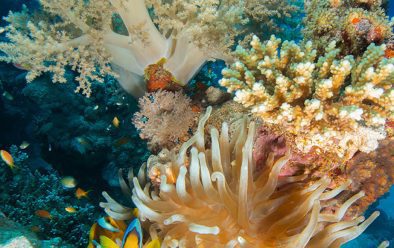 A wide shot to show a Red Sea pair in context, using the Rule of Thirds to place the fish in the frame while leaving enough “blue” to contrast with the fishes’ colour.

In any case, you don’t want to kick up sand and sediment that will degrade your image and leave you with an awful lot of work in Photoshop, removing backscatter with the spot-healing tool.

The other technique (tempered by the caveats above and not always possible) is to try to get below, or at least on a level, with the subject. I regularly see divers photographing subjects as they fin along the reef, shooting downwards to produce images that are uninspiring at best.

Getting low and shooting upwards including some of the blue reinforces the impression of sunlit tropical waters.

A sunburst can often be included, though you might need to select a narrow aperture to ensure that the “blue” isn’t washed out – f11-16 is ideal.

Such subjects rely on careful use of strobes to add artificial light to bring out the “real” colours of the anemone and fish.

While most anemones are fairly dull, some are spectacularly coloured, with red bubbletip anemones superb subjects.

There are no hard and fast rules to how to set up your strobes, but you are likely to have to “dial down” the output from one or the other to stop one part of the subject being over-exposed.

You’ll probably need to rearrange your strobes on their arms as well, to limit shadows and ensure even illumination.

I would suggest, as a starting point, setting the strobes with their heads to the rear of the end of your dome-port and angled slightly apart. You might need to rotate either one, and reduce the output from the strobe closest to the subject.

I referred earlier to Disney’s adventurous wee fish, and nowadays dive-guides across the Indo-Pacific refer to clowns as Nemos in their briefings. This always helps to flush out the pedants who can’t help observing that “Nemo’s dad would turn into a female”, and “How come Nemo ended up in that same anemone, as they disperse in the plankton…?” Such characters are either fascinating or deeply boring, depending on your viewpoint, but they do have a point.

Clownfish do hatch from eggs to drift

as larvae in the plankton, and as the fish develop they settle and find anemones.

This process is not entirely understood, though research has shown that they can use the noise of a healthy reef (reefs are surprisingly loud places) and chemicals given off by anemones to find their way. This means that clowns found in any one anemone are unlikely to be related.

Looking at anemones in the wild will usually reveal a dominant pair of fish, but also many juveniles, which are particularly attractive and often show different colouration to the adults.

SHOOTING JUVENILE FISH relies on a macro lens, and you need to get close. At such distances any movement will be visible, so you need to use a fairly fast shutter-speed and place strobes with care.

I tend to arrange mine almost pointing at each other, using the far edge of the light cones produced to light the subject but not the background. It takes a fair bit of practice, but it’s a worthwhile technique to master. 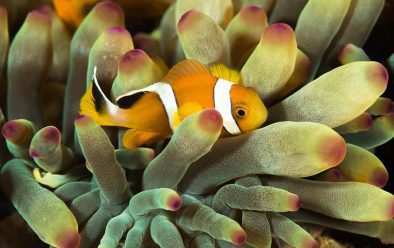 A young Omani clownfish –as it matures, it will lose a lot of its charm.

This can be quite risky. You often see anemones without fish, but you rarely see a clownfish without an anemone. Out on their own, they don’t last long.

Clowns make great subjects for portraiture, but it’s surprising how often I’ve been shooting one and then noticed that the anemone is also occupied by a subset of other little characters that you might be able to shoot at the same time.

Other fish are hosted, some only during their juvenile stages, but a number of small crustaceans also make their homes within the tentacles, often providing the anemones with cleaning services.

Most common are small shrimps, which present quite a challenge to photograph.

The closer you get – even with a narrow aperture, which normally maximises depth of field – you will find that it becomes increasingly difficult to capture all of the animal, which can result in some very beautiful and almost abstract images, showing perhaps only the animal’s eyes within a blurry field.

Clown/anemone pairings offer the chance to take shots of divers as well. For years I would try to exclude divers from my pictures, but of late (and when I can find a willing buddy/guide) I will try to get a “this-could-be-you shot” like the one at the start of this feature.

Obviously, this takes some time to perfect. There are at least three living things that are moving in three dimensions, but the relatively static nature of clownfish offers you a chance that you might not get with the majority of marine life.

As ever in diving and underwater photography, understanding the world and the life around you isn’t entirely necessary to enjoy yourself, but knowing a little more about your subjects can’t hurt.