Beyond the Yellow Train

Beyond the Yellow Train

This underworld dive isn’t everybody’s cup of tea – it’s in an abandoned mine in which the workers were long ‘kept in the dark’ about the risks of their labours, though the supervisors’ gas-masks and protective suits might have given them a clue! MARTIN STRMISKA ventures inside 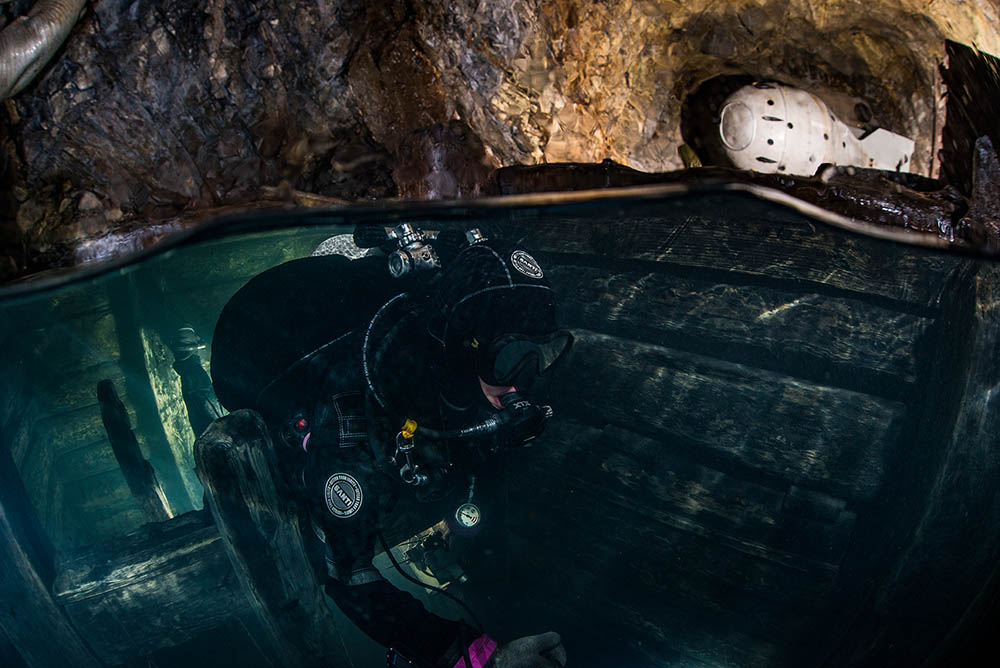 Split image of diver ready to descend along the vertical shaft, and a nuclear bomb replica.

SHORTLY AFTER World War Two Kowary, a charming town in western Poland that had escaped being devastated by German bombs, became the target for a wave of incomers from other parts of the country. Some managed to find well-paid jobs in the fast-growing mining industry.

The state enterprise Kowarskie Kopalnie opened up on New Year’s Day, 1948, and Stanislaw Jasinski was one of the first to enter the mine-shaft near Podgorze village. Like his fellow-miners, he was a labourer with no mining qualifications, and his working tools were a pickaxe and shovel.

Jasinski was not briefed about the ore he was digging, but the presence of Russian scientists and military guards indicated that what was going on at the Podgorze mine was highly important.

He had to sign a document committing himself to secrecy about everything going on there. Other miners who were rash enough to start gossiping while drinking vodka with friends would mysteriously disappear.

These disappearances were not the only phenomenon Jasinski had to be concerned about. His colleague Stanisław Moszkowski worked in the mine for five years, for the last two sorting the ore.

Extracted stones were exposed to a Russian Pietiorka radiation dosimeter.

If the needle moved noticeably, the stone went on the right-hand pile; if it stayed still, it was thrown on the left. After weeks of sorting, pieces of Moszkowski’s skin were peeling off his hands like paper.

Anatol Moszkowski (no relation) began working in radiometry in the mine when he was 18, and got to know a Russian engineer called Winogradow who shocked him with his friendly advice: if you want to live, he said, don’t go to places where the Pietiorka’s needle oscillates much. 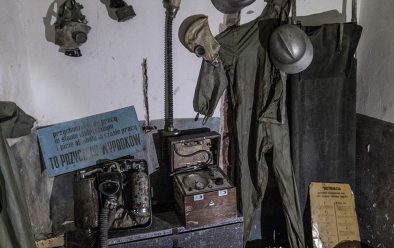 The Russian experts always wore protective suits and gas-masks, while the miners worked without any protection.

Eight years later, the quality of ore extracted from Podgorze was falling, but in any case it was no longer such a strategically vital raw material.

The Russians departed, and it was only then that Jasinski and the other miners learnt the truth (though they must have suspected) about the substance they had been digging out for years and shifting with their bare hands.

It was the radioactive, uranium-rich mineral uraninite, and the gas they had breathed was radon.

In 1963, the mining operations suddenly ended. Those still working were sent into disability retirement. Everything was done in secrecy.

THE GIANT MOUNTAINS (Riesengebirge) are a rich piece of nature. Their dense coniferous forests, intersected by limpid streams, waterfalls and mountain walks, attract tourists in the warmer months, while several ski resorts become popular in winter.

Kowary also has an unexpected visitor attraction in the shape of the Podgorze mine. In the mid-1970s an “inhalatorium” was established in one of its tunnels, as it was claimed that long-term exposure

to a radon-rich environment helped in treating serious skin, lung and kidney diseases. The theory sounds paradoxical in the context of the irradiated miners.

The March sun does not fully reach us on the northern side of the Giant Mountains National Park. Podgorze lies in the foothills of Snezska, Poland’s highest mountain, and it is still snow-covered today, which is why the asphalt road from the village to the mine entrance can’t be used by road vehicles.

Luckily, mine manager Patryk Guzik has sent quad-bikes with trailers to transport us and our equipment to the small wooden house near the entrance.

Before darkness engulfs excited divers, registration and the usual paperwork has to be completed. 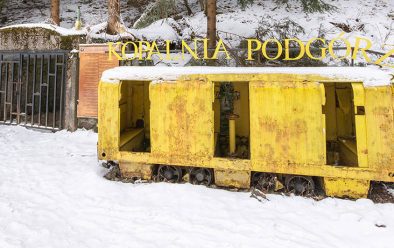 The entrance to the mine and the yellow train that used to bring miners to the central shaft located 400-500m inside.

The cold penetrates deep into the bones as we stand surrounded by gloomy forest, and only the yellow train standing in front of the entrance lends a touch of colour. Seventy years ago, it was used to bring the first  21 miners to work.

Ignorant about uraninite and radon and their effects, it seems that they were just excited about having jobs.

The train brought them through a 400m tunnel to a central shaft, from where they proceeded to various mining levels.

Following the same route now is our scuba team, but with our gear driven in on quad-bikes. First stop is a display. Glasses, plates, and other objects made of uranium-oxide-doped glass shine yellow-green when exposed to ultraviolet light.

At another stop there is an exhibition of anti-radiation and protective clothing for working in a radioactive environment. The dark story of these Polish workers is now alive in our minds.

The atmosphere in here is dense, and a question is hanging in the air – is it not still radioactive in here?

Yes, it is, but no longer at the sort of rate that could be damaging to health, we are assured. 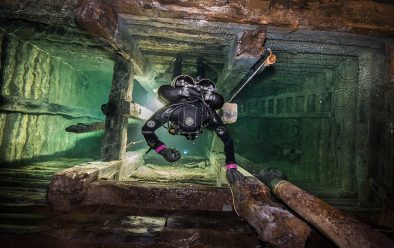 The final station is the vertical shaft, the artery of the mine connecting the 12 levels of tunnels. Water constantly flows into the mine through cracks in the rock, and flows out again to form a small creek in the main tunnel.

When the mine had closed down and the pumps stopped draining groundwater, the shaft and the lower levels got flooded, which is why we’re here.

THE ROOM CONTAINING the flooded vertical shaft looks scary. Water is dripping from the dark walls into the small pool. At the entrance, there is a replica of a Soviet atomic bomb. Uranium extracted from this deposit was used to create the original sinister weapon.

The horrific scene is complemented by old ventilation pipes and an atomic suit with gas-mask. A strange monotonous rumbling can be heard, as if a detonation could occur at any second, leaving no chance of escape.

Once we’re under water, the rumbling subsides. We submerge using the vertical wood-panelled double shaft. It is 520m deep, yet not wide enough for two divers to proceed abreast, so we descend one by one.

Being confined in this half-kilometre-deep chimney, unable to extend our bodies to trim position, feels weird. 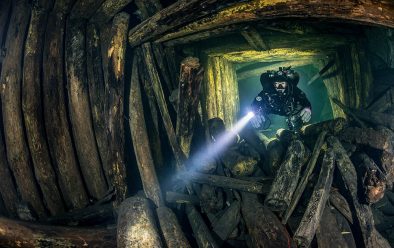 The portal to the horizontal tunnel system at 30-31m.

Passing through the portal into the tunnel at the first underground level 30m down is liberating. At 70m, 110m, 150m and deeper, other tunnels can be entered.

At the bottom of the shaft there are fins, stages, lights and masks that have been dropped by careless divers.

The shaft itself is a sophisticated piece of timberwork made up of tens of thousands of tree trunks. In the tunnels thousands more were used to create portals and support unstable ceilings.

Marian Michalek, a miner who dug uraninite 70 years ago, said that sometimes it was enough just to strike a deposit with a stick to make it fall down into the carriage. He would find himself covered in black dust, and a sweet taste of uranium shale remained on his tongue.

Today, pieces of slate  can fall through the tree-trunks down onto divers, and grey sediment, the former radioactive dust, lies on the floors of the narrow tunnels. Carefully passing through them, we look for traces of uranium and signs of radiation at every turn.

It’s nonsense, of course, but this place forces the mind into absurd imaginings. And when a very deep shaft and a 400m-long tunnel separate you from daylight, such feelings multiply.

As the scary rumbling and the sound of water dripping into the pool at the top of the shaft is heard again, this time round it comes as a liberation. Taking the first breath from the musty mining air means a return to the living.

The black walls no longer seem that scary. The water doesn’t feel as cold as it appeared at first, and the Soviet bomb is just a replica.

But the story of Stanislaw Jasinski and the yellow train remains real.