When too much time has elapsed since that last dive, a refresher is in order, says SIMON PRIDMORE 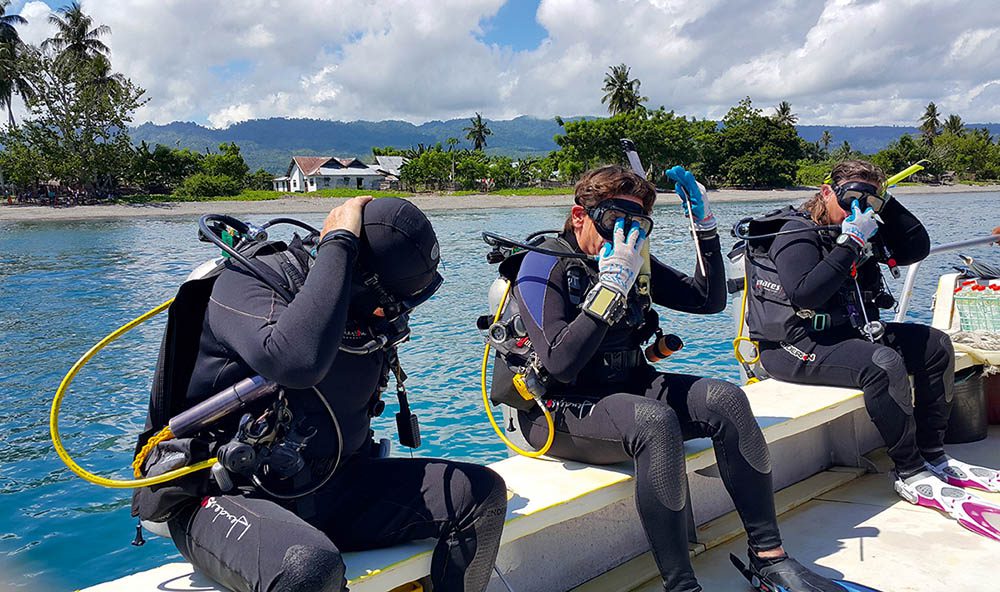 JIM LEARNED TO DIVE in his 20s. He then went to live on a tropical island for a couple of years, and spent most of his weekends scuba diving. He did some technical diving courses and made a couple of long trips to exotic dive destinations. He was a diver.

Life and work responsibilities then intervened. He became a father and the primary wage-earner, and those roles took priority. He no longer had time to dive. His equipment was packed away, but each time the family moved home, it came with them.

Jim was still a diver after all. He didn’t dive any more, but one day he would.

Twenty years later, his work/leisure balance had changed again and, out of the blue, a friend from the old diving days called him. “Hey Jim,” he said, “we’re heading out to do some diving in north-east Indonesia in a few months’ time. Do you want to join us?”

Jim asked if he could think about it. This was diving in a remote destination. They would be doing more than 30 dives in a 10-day trip. It had been two decades since he had been in the water.

Would he still remember how to dive? Would his old equipment hold up? Might the diving be too challenging for him? Would the other divers be experts?

Would he hold them back or make a fool of himself?

On the other hand, this was a great chance to go back to a sport he had loved. If he didn’t seize the opportunity now, perhaps he would never dive again, and it would always just be something he used to do.

Jim dug his gear out of the cupboard. It all looked in good shape, but he thought he had better take it to a local dive-centre and have experts look at it.

While he was there, he asked if he could do a scuba refresher, to remind him of the basic skills. It went well. His equipment was tested and passed as fit for purpose once a few O-rings had been replaced.

The only casualty was his mask. The rubber had deteriorated over the years, and it leaked the moment he put his face in the water. He needed a new one.

His computer didn’t look out of date, compared to the new models on display in the shop, which surprised him. But he compared his sorry-looking old wetsuit with those on the rack, and decided that a new suit might be a smart investment.

After four flights and 24 hours either in the air or in airports, Jim met up with his old friend and their fellow-divers in Sorong, the gateway to the diving Disneyland of Raja Ampat. The divemaster watched them all unpack their gear, and handed forms out.

This was the point at which Jim would have to reveal his lack of recent experience. He wondered if he would be put on some sort of special watch or separated from the group, at least at the beginning.

The divemaster didn’t seem to find it unusual, however. He just commented that there had been a “bit of a gap” since Jim’s last dive, but seemed very happy to hear that Jim had done a recent refresher. 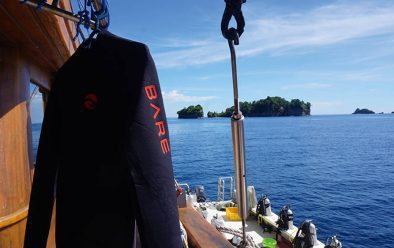 Jim’s new suit amid the diving Disneyland of Raja Ampat.

They discussed weighting, and the divemaster recommended that Jim wear a little more than he had carried on his last dive all those years ago, to compensate for the new suit, an understandable anxiety, as well as any additional “bioprene” he might have taken on over the years.

Jim immediately felt accepted and comfortable. He was not being treated like a freak or an outsider.

He listened in on other divers’ “interviews” and they were being asked very similar questions. Even divers with much more recent experience had issues with weighting and buoyancy.

On day one, dive one, Jim back-rolled in, deflated his BC, exhaled and found himself stranded on the surface. Everyone else was gone, dropping to the seabed.

Dammit! His fear that he would not be able to do this thing after all collapsed on him like an avalanche.

He was not completely alone, however. The crewman on the tender-boat was holding two dive-weights out and handed them to him: “One in each pocket. You’ll be OK.”

Jim did as instructed, and then made another attempt to descend. Fins pointing down, left arm in the air, thumb on the deflator button. He took a deep breath from his regulator, then exhaled fully. And down he went. Success!

A little too much success, in fact. He was dropping like a brick. He felt pressure in his ears, and the old instincts just kicked in. He equalised and added a little air to his BC to reduce his descent speed.

Then he looked down, found his group just below him, exchanged an OK signal with the guide and just followed along.

After the dive, there was the usual banter: “Good dive?” “Great dive!” “So many fish!” Nobody mentioned Jim’s false start. Indeed, he got the impression that the guide was the only one who had noticed. The others had just been focused on themselves. All Jim could think was: “What was I worried about?” and: “Why did I wait so long?”

He had run low on air before the planned hour was up, but so had another of the divers, so they had ascended together. Even with an almost empty cylinder, he still had plenty of air in his BC on the safety stop, which he knew was another sign that he was overweighted.

By the end of the day, however, on dive four, he had taken one of his additional weights off again and was descending without difficulty.

Jim was still using air faster than the others, but tried to compensate for this and extend his dive-time by staying a little shallower when they were on a reef-wall.

The next day he was flicking through a magazine on the boat and found an article called The Art of Conservation.

He read it and followed the advice. Very soon, his air-consumption issues were a thing of the past and he was coming up at the end of a dive together with the other divers in his group, and still with plenty of air in his cylinder.

As those of you familiar with Murphy’s Law might expect, just as Jim began to feel comfortable, disaster struck.

He surfaced at the end of a night dive, pressed his inflator button and all he heard was air escaping past his ear. He couldn’t make himself positively buoyant, and had to kick hard to keep his head above water.

Fortunately the tender-boat was next to him, the crewman saw him in difficulty and told him to pass up his weightbelt. Once rid of that, he could float easily.

Back on the liveaboard, he found that the shoulder-valve on his BC had cracked, preventing the cell from holding air.

At first he thought that it was the hard plastic fitting that had broken but, as he picked away at the hole that had formed, the “plastic” started flaking away into his hand. What he had taken for plastic was in fact a fat layer of glue that had held the fitting in place and was disintegrating.

The passage of time had taken its toll on Jim’s old BC and it was now unusable and irreparable, at least in the short term, so he borrowed one of the boat’s rental BCs.

This, of course, meant that he had to start from scratch again in terms of getting his weighting right. But it didn’t take him long to get it sorted out.

After every dive, he would return to the boat, smiling from ear to ear. His old friend came up to him after one particularly outstanding dive.