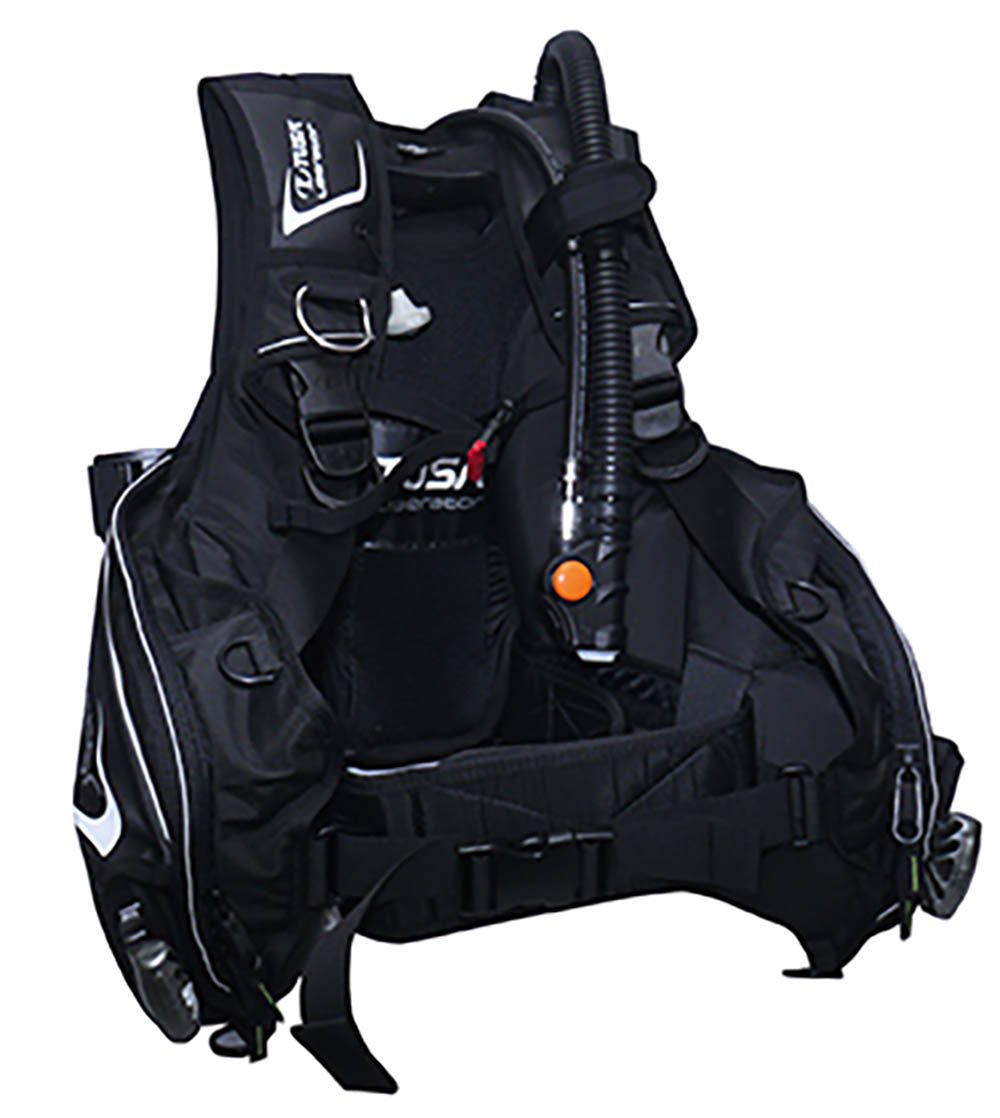 TUSA IS A JAPANESE COMPANY that started in 1952 and came to prominence in the UK in the 1980s as Tabata USA. CPS Partnership has distributed TUSA since 1998 as one of a number of diving-equipment lines.

It further refines the ranges it offers by cherry-picking, rather than carrying every single product. This policy is designed to ensure happy customers.

When I tested TUSA’s top-of-the-line Soverin Alpha BC I was very impressed, and it later won a divEr Award for its design and capabilities. CPS Partnership subsequently lent me the budget Liberator BC to trial.

So does a bottom-of-the-line BC from a slightly under-the-radar manufacturer stand any chance of impressing a diver who has experienced top-of-the-line kit from diving’s biggest brands?

Well, once again TUSA over-delivers, making this a very attractive budget BC, and making me look as if I’m writing advertorial.

Let’s go through its features and benefits and how it performs in the water to understand why, examined objectively, it’s a winner.

The Liberator is a jacket-style BC that distributes air either side of your cylinder for routine horizontal swimming under water, air that moves up to your shoulders during ascents.

When fully inflated at the surface, air also fills the side-pouches, pushing a properly weighted and trimmed diver upwards to sit near-vertically with head and at least the top of the shoulders clear of the water.

The single-bag outer bladder facing away from the diver employs 500-denier Cordura. This coarse weave should be resilient to punctures that can occur with wreckage and coral. 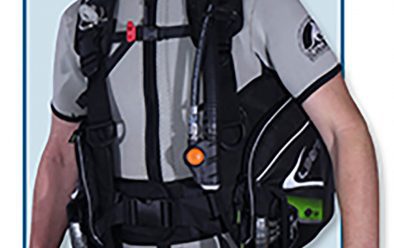 On the side sitting against the wearer, smoother 420 denier is used. This is resistant to abrasion from constant contact with your suit. The choice of materials should make this a long-lasting BC, even with a lot of use.

The buoyancy of the medium-sized BC is 14kg, typical of BCs aimed at divers using single tanks and coldwater wet- or drysuits.

The harness has breakaway shoulder-straps with side-release buckles. The height of the buckles is fixed, so you can’t adjust their position on the webbing.

Height adjustment lets you change the buckles’ position, allowing it to rest comfortably on your collarbone, for instance, and this comfort feature is commonly left off budget BCs.

The chest strap is also fixed (height adjustment can help prevent interference with a drysuit chest inflator), again with a side-release buckle and a small whistle built in for surface signalling.

The cummerbund is closed with Velcro. Its length can be easily and quickly adjusted, so you can keep it snug if you change between a dive-skin and a drysuit, or (within reason) lose or gain weight.

Finally, a waist-strap with another side-release buckle fastens over the cummerbund. The plastic back-pack has a built-in handle and is lightly padded.

The cylinder camband uses TUSA’s Rite Tite buckle. There’s an adjustable top loop to set the height of your cylinder, which can help with pitch-control and stop you hitting your head on the regulator. 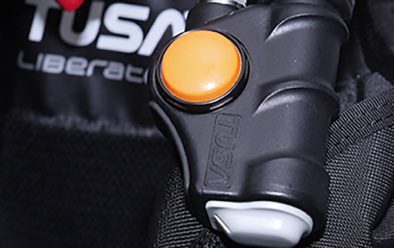 Direct feed and mouthpiece and buttons.

Inflating and dumping is straightforward. The direct-feed is operated by a large push-button and oral inflation/mouthpiece dumping is done through a coldwater mouthpiece.

There are three dump-valves. One is a rapid exhaust built into the top of the oral-inflation hose and activated by pulling down on the mouthpiece. A second is mounted on the right shoulder and the third is a bum-dump on the jacket’s lower right.

The shoulder and bum-dump have nice large pull-knobs in hi-vis colours to make them easy for your buddy to locate.

For stowing and carrying accessories, the Liberator has two pockets and five D-rings. The pockets are large and closed with double zippers, a nice touch.

Above each pocket is a small plastic D-ring, suited to clipping on an octopus-holder or console. At the bottom of the BC are two more and, on the right shoulder, a large metal D-ring suitable for securing a safety-line or my very expensive camera!

Back in Gibraltar once again as a guest of the Gibraltar Sub Aqua Club, a BSAC branch, I put the Liberator through my usual BC test criteria.

The camband is really nice. The cam-lever can be pushed closed with two fingers, so there’s none of that huffing and puffing trying to force it shut, as with some makes.

If you aren’t into brute force or don’t have strong hands, the Rite Tite buckle is a positive advantage.

Once on my tank, I never took the Liberator off it for the six test-dives. Unlike with some other BCs, the top handle built into the pack is easy to use for carrying your set, or for someone else to hold as they pull your set into the boat.

When you inflate the Liberator, the bladder does expand inwards a fair bit, as do many others, so it’s best to tighten the straps with the bladder half-full. I liked the harness – it doesn’t seem to flop around, so the shoulder-straps don’t tangle, or you find the cummerbund stuck together in back of you. So it’s very easy to put on unassisted. 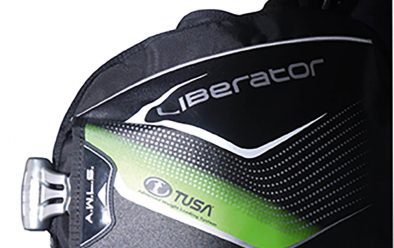 The weight-pockets were simple to load.

I opted for around 3kg in each quick-release side pouch and 1kg each in the non-ditchable trim-weight pockets.

I was using a 300-bar 12-litre steel cylinder, so by the time you add air, regs and DSMBs and reels, you’re approaching an all-up weight of more than 30kg.

Shore-diving on the Rock means 250m walks with a choice of steep slope or even-steeper steps, so this is a good test of a BC’s comfort under load.

I found the Liberator far more comfortable than a rival top-of-the-line BC I used to own – those shoulder-straps would really cut into my shoulders.

The TUSA’s lift is similar to that of other jacket-style BCs but I found the buoyancy better distributed, pushing me a little higher out of the water.

I measured this at the start of the dive, when I was around 4kg overweighted to compensate for air loss during the dive. The Liberator held my mouth around 20cm above the waterline, which is higher than other models I’ve so far tested.

In reality you’ll float even higher when using the lower-pressure, smaller-capacity cylinders provided by most dive-centres and liveaboards.

I floated vertically, rather than pitched forwards or backwards, so there’s no need to expend energy finning to keep your head high as you look out for your pick-up boat on the horizon.

Underwater stability was excellent. I didn’t find it necessary to flutter my fins or hands to compensate for any pitching or rolling.

Trim and weight properly and this is a consummate performer under water. Image-makers will appreciate this, because it makes framing photographs easier and eliminates wobblecam when shooting movies.

The direct-feed inflated the BC in as little as 4 seconds. It’s progressive, allowing some control of the inflation speed. Push the button gently and it inflates a little more slowly.

The oral inflator has an anti-debris mesh panel inside to keep out small stones, another nice feature for shore-divers.

BC dump-valves are supposed to dump faster than the BC’s direct-feed can inflate, so that if your direct-feed jams open you can still control your ascent. 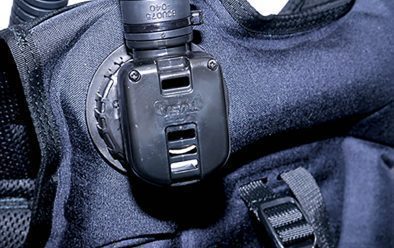 I tested this and found that both the rapid exhaust valve and shoulder-dump could easily outpace the inflation rate.

I also wanted to test the stopping distance if the BC was fully inflated, which might happen if the direct-feed failed and the diver began ascending before being able to reach the dump.

I do this test in about 10m by holding onto a bit of wreckage, pumping up the BC and letting go.

Either top dump could brake the ascent in a little over a metre. There was no water in the BC after I’d finished my series of test dives – the dumps have really efficient non-return valves.

The storage pockets easily swallowed a full-size DSMB, with space for a finger-spool.

The two zipper-pulls mean that you don’t have to reach to the far front or back of the pouch to fully open or close the zipper, and I found removing and replacing items in the pockets easy, even with 3mm gloves.

There’s an additional fail-point here, I suppose, because of the second pull-tab. The pockets aren’t impeded by the weight-pouches, either.

The Liberator is a very nice BC for single-tank diving. It meets the needs of lift, comfort, stability, safety and ease of use like a trooper. Highly recommended.