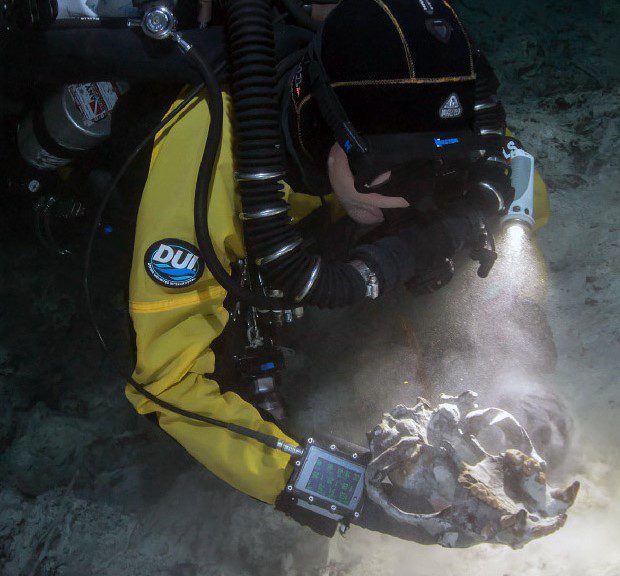 Cave divers have discovered the skulls and bones of extinct bears and wolf-like animals in Mexico’s Yucatan peninsula – and the discovery has been described as ground-breaking by palaeontologists.

Expert Blaine Schubert of East Tennessee State University called in professional divers to help his team recover the fossilised remains from the Hoyo Negro (Black Hole) cave, a bell-shaped flooded pit some 60m across and 55m below sea level.

The cave marks the intersection point of three passages, creating a natural trap for animals. Melting glacier water flooding the cave after their deaths would have helped to preserve their bones.

The divers found fossils from seven individual bears of the species Arctotherium wingei, which was related to the prehistoric short-faced bear, thought to be the biggest ever to have lived. Collagen preserved in a tooth enabled the team to date the remains to about 11,000 years ago, at the end of the Pleistocene period.

A number of prehistoric animal and also human skeletal discoveries have been made in the Hoyo Negro caves over the past 12 years, dating back as much as 40,000 years, but the latest find is particularly significant for palaeontologists.

Neither species had been known to exist north of South America before the expedition. Because of their tropical climates Central America and south-eastern Mexico have a poor fossil record from the prehistoric event termed “the Great American Biotic Interchange”.

This occurred after the Panama isthmus rose and created a land bridge between North and South America about 3 million years ago, enabling migrations in both directions. Both the mammals found appeared to be descended from North American species that had long before moved south – but then migrated back north.

The discovery, which has now expanded their known distribution more than 1200 miles north of South America, is described in Royal Society Biology Letters.