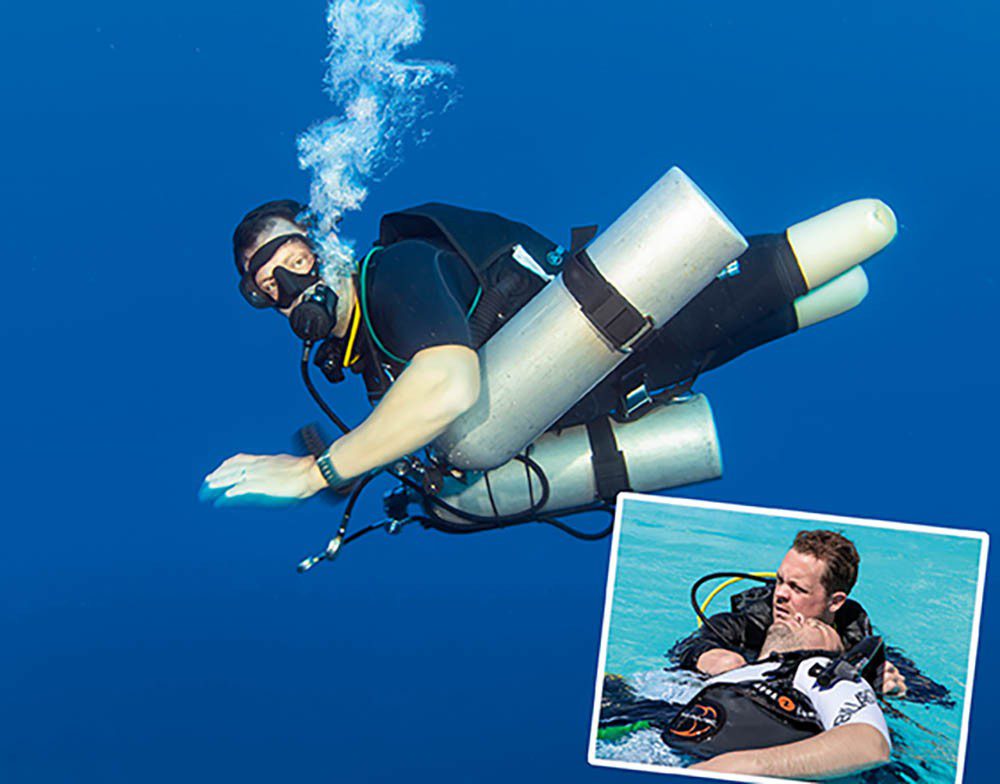 “I’M DOWN IN A BLACK WETSUIT”. I’m four foot six because I’ve got no legs on. I look like a seal. Well, what do sharks eat? Seals. That’s what’s going through my head.”

It surprises me that Josh Boggi is afraid of anything – including sharks. Since the former Royal Engineer stepped on an IED (improvised explosive device) while on tour in Afghanistan – resulting in the loss of both his legs and one arm – he has learned to walk again, taken up cycling, won medals at the Invictus Games, completed the world’s hardest endurance cycling challenge, the Race Across America, learned to dive, and has now been certified as the world’s first triple-amputee Rescue Diver.

The first time Josh saw a shark – an uninterested grey reef – he says he nearly spat his reg out. Pretty understandable for someone who had been afraid of sharks since watching Jaws as a kid!

In fact, he hadn’t felt comfortable in the ocean, and is sincere when he tells me: “If I couldn’t touch the floor, I didn’t like it.”

But his perspective is that “you’ve got to put yourself in situations that overcome these fears.” That’s why he dives: “Every time I go under water, I think I’m going to be attacked by something bigger than me, but this is exactly why I do it. It takes me out of my comfort zone and puts me in a position where I’m constantly being challenged.”

It’s also why he is booked onto a shark-diving liveaboard later this year.

JOSH FIRST TRIED SCUBA while on honeymoon in the Maldives in 2016 (if you don’t count perforating an eardrum during a military diving aptitude test aged 20). He was “a bit bored” with sunbathing and, spotting a dive-centre, went in to ask if he could do a try-dive.

The instructor, Josh tells me, grinning, looked him up and down and said: “Diving? This could be interesting!”

The instructor cancelled his plans for the following day and Josh contacted his surgeon in the UK to get the necessary medical permissions. He was diving the following afternoon.

It’s clear how much Josh loves diving – he lights up when talking about his first underwater experience: “I was all over the place on the first dive but I fell in love with it straight away. It was amazing.” He decided “then and there” to get his Open Water Diver, and describes diving as his “favourite thing to do in the world”.

Josh doesn’t use special equipment – or even fins – to dive. While some of his friends put fins on the end of their stumps, he has yet to try that (he doesn’t want to look “even more like a seal” to the sharks). Once he’s buoyant, he swims breaststroke instead of kicking.

A YEAR AFTER qualifying, Josh saw a Facebook post from a double-amputee friend who had been diving with Deptherapy, the charity that runs specially adapted scuba programmes for seriously injured personnel and veterans of the British Armed Forces. Since being founded in 2015, it has completed 10,500 hours of volunteering, helping 73 veterans. That’s 2000 hours of diving!

Inspired, Josh decided to complete his Advanced Open Water: “I flew out to Egypt with Deptherapy, got in – and I’d forgotten everything.

“I hadn’t dived for a year. I knew how to breathe and everything and get buoyant, but I was all over the place, and it took a day or two to get back into it.”

He is clearly fond of the charity that has done so much for him. “The healing power that diving has is unreal,” he tells me. “I wouldn’t be where I am now if it wasn’t for Deptherapy.”

People like Josh with physical injuries – amputations, broken legs, backs, gunshot wounds and so on – can suffer from constant aches and pains. 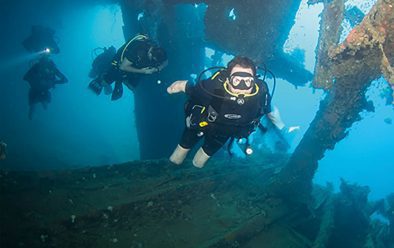 There is freedom in being under water, in this case in Truk, but it can be hard work when you don’t have the benefit of finning.

While diving, he tells me, “there’s no pain whatsoever. You’re just existing down there. Just being, taking it all in.”

Diving can also help with post traumatic stress disorder or brain injuries, because it’s calm and silent under water. Josh noticed that the soldiers with PTSD who were initially “ready to bolt and not actually get on the plane” were “completely different people” by the end of the week.

As someone determined to rise to any challenge, Deptherapy’s “hands-off” approach appeals strongly to Josh. “They let you do the thinking,” he explains. Rather than telling him what to do, they show him how an able-bodied person would carry out the skill; then it’s down to him to figure it out: “It’s all about adapting and overcoming.”

Importantly, Deptherapy doesn’t lower its standards in consideration of Josh’s injuries. If anything, its expectations are higher: “Obviously, they’ll give you advice here and there, but that’s what I love about them. They’re not there to give people ticks in the boxes… they make you work hard, and it’s great.”

Dr Richard Cullen, Founder and Chairman of Deptherapy, told me how impressed he had been by Josh’s hard-working, can-do attitude: “Josh doesn’t understand the words ‘can’t’ and ‘impossible’. Since he started diving with us, he has shown a determination not to be defined by his life-changing injuries.”

AFTER COMPLETING HIS Advanced Open Water Diver, Josh wanted to further improve his diving, and decided to do his Rescue Diver. When he started his course, he knew that he would be scrutinised to the hilt: “There’s a standard you need to nail – and more – because no one’s done this before.”

There were many tough skills to complete. Most, let’s be honest, are hard work for able-bodied divers. But rather than be overcome by the challenge of lifting an 80kg man out of the pool with one arm, Josh breaks the task down into stages: “I need to get him to the side, get out myself, get him out… and then go into rescue breathing.”

Similarly, working out how to ascend with an unresponsive diver took a while and a few failed attempts (“first time I was halfway up and I dropped the bloke!”) but, after chatting it through with his Deptherapy instructor, Josh figured out the best approach.

As if being tested on the skill again, he runs me through the process: “Straight in, check they’re unresponsive, reg in. Right. I’ll literally reach around with my stump on the reg, dump everything, inflate, clamp on the cylinder and get them up. Obviously slow ascent rate. Get them to the surface, smash the BC up, weights…” and so on.

HIS MILITARY EXPERIENCE clearly comes into play here: repeating a drill so many times that it becomes reactive, almost automatic. “That’s the training kicking in,” Josh confirms: “It’s your body going into a reflex that you’ve trained to do again, again, again.” Without regular and repeated practice, you have what the military calls “skill failure”. Essentially, “you’ll forget how to do it”.

a swivel all the time” looking out for problems: “Why is he coughing? Who’s that over there? Why are they diving on their own?”

As in the military, when problems arise, planning is key. If someone’s missing, rather than rushing out straight away, you must step back – “Command Pause” as it’s called in the Forces – to assess the situation before acting.

“It’s the realisation that getting in sometimes isn’t the best way forward.”

Josh’s Rescue Diver assessment was observed by four Master Instructors, which he said made him feel “under more scrutiny” than he had ever experienced before. Not to mention the scrutiny he applied to himself; he wasn’t happy with how he did on his first assessment (despite passing), so he “went and did it again!”.

“From the outset, we were very clear that, being a triple-amputee, he faced massive challenges in becoming a PADI Rescue Diver,” says Dr Cullen. “You show Josh what the skill is and then he adapts it so that he can complete it in spite of his disabilities.

“To watch his assessments was amazing; he insisted on perfection in each skill and achieved perfection, becoming the world’s first triple-amputee Rescue Diver.”

WHAT OTHER STRUGGLES are faced by amputee divers? Current is a killer: “It’s just hard work. You haven’t got legs to fin with, so you’re using your arms to power.” Josh faced tough currents several times, even while doing a tired-diver tow with “a lad with a leg missing”.

On another occasion, a strong current kicked up when he was returning from a leisurely shore-dive. Diving in sidemount configuration, he had used a third of his two 10-litre cylinders on the way out and, when he turned back, the current hit. It was so strong that he “just wasn’t going anywhere”.

By the time he got back to the beach, exhausted, he had used nearly 400 bar and had 10 bar left in each cylinder. 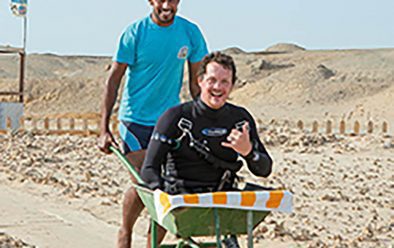 In Egypt, when a barrow is the most practical way to get Josh and other amputees down to the shore.

However, Josh stresses that the main problems for amputees usually involve getting to the dive-site or going up from a beach. There’s a picture of him in Egypt, being carried down to the beach in a wheelbarrow. It was the only way he could cross the 25m stretch of sand to get to the shore.

He admits that it was “a bit shocking” when he was pondering how to get to the dive-site without his prosthetics and “this wheelbarrow just rolled up”.

WHILE BEING DUMPED onshore in a wheelbarrow “can be a bit demoralising”, for Josh it’s all about remembering that “I’m doing this because I can’t wait to get in there and get my head wet, and I just love it”.

When he was first injured, asking for help wasn’t so easy. Once he could walk again, he felt invincible. He insisted that he didn’t need a wheelchair or help from anyone, did too much too soon and put himself back in hospital with infections in his legs.

Now, if he needs help, he’ll ask. As far as he’s concerned: “There’s no point trying to be a big hero” struggling across deck with your tank when someone could help you.

The only time he won’t ask for help is when setting up his kit, which he always insists on doing himself. “It’s like in the Army, before you go on an operation you lay all your kit out; you know exactly where everything is in each pouch. So if anything happens, you react to it.”

So how does it feel to be the first triple-amputee to ever pass the Rescue Diver course? Great, of course, Josh tells me, but he didn’t know this until afterwards.

It wasn’t the reason he took up the challenge – he just did the course, he tells me, to “keep improving as a diver and enjoying the sport more”.

THE SHARK TRIP to Egypt apart, what other challenges await Josh? The first he’s very clear about: to get his wife to dive. She had a panic attack during their dive in the Maldives and hasn’t tried it again since.

There is also “talk of trying to be a DM”, but he has yet to decide whether being a Dive Master is for him. While clearly not one to shy away from a challenge, to be able to pass the timed swims he would have to “hit Paralympic standard”, he says.

Given all that he has achieved, it’s probably not beyond him but he’s “not really fussed” about it at the moment. Laughing, he tells me: “I don’t actually like swimming, to be honest.”

So what else is on the horizon? “Who knows? We’ll see,” he tells me. “But at the moment, I’m just enjoying diving.”